As the tragic film They Shoot Horses, Don’t They? hit theaters in 1969, Ford engineers were working on a new car called the Pinto. Oh, the irony. . . . Though it wasn’t stylish or powerful enough to be considered a “pony car,” Pinto was one little horse you wanted to shoot in the head.

At the time, Ford CEO Lee Iacocca didn’t say, “Let’s build a car that will make everyone’s ‘10 worst’ and ‘10 ugliest’ lists and that also explodes a lot,” but he did want a car that would start under $2,000 and weigh less than 2,000 pounds—a formula that was primed for disaster.

Ford needed to keep pace with a wave of cheap mini compacts: the VW Beetle (which peaked in the U.S. in 1969 with 367,607 units sold), Japanese imports such as the Toyota Corolla, and the upcoming Chevrolet Vega and AMC Gremlin (a couple of other jim-dandys). Consumer Guide editors test drove a sky-blue Ford Pinto when it debuted for model-year 1971. But they only drove the 2.0-liter version, not the 1.6-liter bargain-basement special that cost only $1,850—the lowest-priced Ford car since Leave It to Beaver’s first season.

While our editors praised the Pinto for its manufacturing and quietness, they claimed that the “car seems to ‘wander.’ . . . In truth, the wind does not throw the car sideways out of its lane of traffic.” (Well, thank goodness for that!) “But the feeling of the car being moved sideways in a crosswind is unmistakable. . . . High winds also affect Pinto’s top speed to a great degree, slowing the car down as much as 12 miles per hour.” And this was with the 2.0! (What’s scary is that other cars of the era were even weaker, such as the 1,312-pound 1971–72 Honda 600 coupe.)

The Pinto’s low pricing resulted in sales of 2 million units over the course of the decade. But, as we all know, the car also became notorious for its exploding gas tank. A design flaw allowed for the fuel tank to be punctured during rear-end collisions, resulting in dozens of deaths. Ford claimed that the Pinto was just as safe as the other tinderboxes in its class, and the company waited six years after the well-publicized 1972 death of Lily Gray to initiate a massive recall.

For years afterward, the Pinto lingered in the public consciousness as a bellyaching joke. I still recall the night when Johnny Carson—as Carnac the Magnificent—put an envelope to his turban and said, “McIntosh, Dolly Parton, and the Ford Pinto . . . . Name an apple, a pair, and a lemon!”

The real joke was that the Pinto could look like a lemon due to its shape and yellow paint, as evidenced by the advertisement below. Initially a coupe, the Pinto was offered as a “Runabout” hatchback beginning in model-year 1972. I find this ad perplexing on a number of levels. First of all, why is the woman smiling? She’s unpacking a Pinto in the middle of wasteland in what looks like November! Then there’s the text itself. “Pack in your golf clubs,” it says. Who takes a Pinto to the country club? “Pack in your golf clubs. Groceries. Those big pieces of luggage. Pack it all in.” Really? All of it? In a Pinto?

“But that’s not all,” the ad continues. “You get the regular Pinto goodies like a gas-saving 75-horsepower engine for more ‘go’ on hills and freeways.” Go? Go where? Back down the hill? Sideways in a crosswind? While the initial Pinto was rated at 75 horsepower, the Society of Automotive Engineers revised its horsepower rating system from “gross” to “net” in 1972, which dropped the 1.6-liter Pinto’s rating from 75 to 54. That’s right, 54 horsepower.

The ad concludes: “Put a little kick in your life.” Of course, the joke would be: Just don’t kick it too hard. It could all go up in flames. 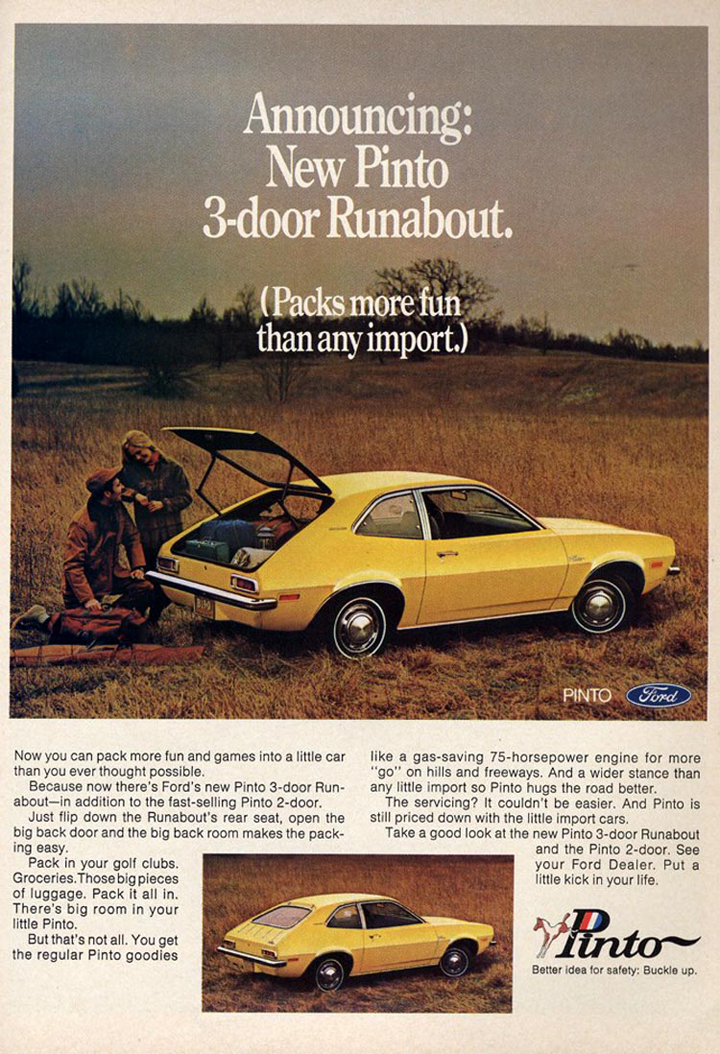