Here’s my Cortina in Colorado, soon after our move from Florida. It’s parked in the driveway of a friend who lived in Evergreen, west of and above Denver, who put me up for my first few months there. I eventually got my own place—and a job—in Denver. I believe the Porsche parked behind is a late-model 356C that belonged to still another friend who was visiting too. By this time, the Cortina has picked up a “Ford Sport Club” grille badge that I had seen advertised and sent away for.

It’s said you never forget your first love, no matter how the relationship turns out, and I think most people remember their first cars with equal ardor. I sure do. It was an off-white “1967 1/2” British Ford Cortina GT with black interior.

It was an oddball choice for a 21-year-old: a boxy, orthodox rear-drive compact (about the size of today’s Ford Fiesta) with modest power and zero sex appeal. But I’d been reading about cars since toddlerhood and thought I knew everything. (What 21-year-old doesn’t?) Besides, I wanted a new car and was on a tight budget. Though this was 11 years before I joined Consumer Guide, I now realize that the Cortina is precisely the kind of left-field car that many auto journalists buy for themselves.

For readers unfamiliar with the Cortina (doubtless most of you), it bowed in 1962 as simple, low-cost transport for middle-class British families, and it was a huge success. Over a million were sold before the basic design was rebodied for 1967’s “Mark II.” In those days, Ford of Britain—which last year marked its centennial, by the way—operated pretty much independently of the Dearborn, Michigan, home office, though I’ve read that chairman Henry Ford II personally approved the GT model, which wasn’t in the original plan. Ford Werke in Cologne, Germany, was also its own world. Not until 1968 were the two subsidiaries combined into Ford Europe, an early example of globalization. One of the first results was the mini-Mustang Capri, which came to the U.S. in 1970 as a German-built car with British powertrains. But I digress . . . .

I bought the Cortina new, in July 1968, when I was a sophomore at the University of Florida in Gainesville. (Go Gators!) My dad was chairman of the music department and footing my tuition. I was living at home but otherwise supporting myself by working at WRUF, the school’s fully commercial, NBC-affiliated AM/FM radio station. Dad, who was better off financially than ever (he’d bought a 1966 VW Beetle as his first new car), offered to go the down payment on a new car of my own, provided I did the rest. Happy birthday, Chris.

Why the Cortina GT? Well, the price was right—around $2,000—and the major car mags had given it good reviews. Moreover, I found that the contemporary Toyota Corolla and Datsun 510 didn’t fit me, and the local dealers seemed a bit fly-by-night.

Then too, the Cortina resonated with an Anglophile bent I had developed from exposure to Autocar and Motor magazines and such TV shows as The Saint (starring a pre-James Bond Roger Moore as soldier of fortune Simon Templar). Moreover, I could easily believe this was another “Total Performance” Ford, with all the status that carried at the time. And in truth, my GT was a close cousin to the Colin Chapman-fettled Lotus-Cortinas that were doing so well in British Touring Car racing and international rallying.

Despite the well-known hazards of “British workmanship,” Simon Q. Templar, as I called it, proved a faithful friend. It taught me a lot about life and myself, such as how not to feel embarrassed at constantly bugging the dealer about quibbles such as wipers that refused to park all the way down and habitual wheel vibration, then common with strut-front suspensions. Simon also developed assorted rattles that I was always trying to eradicate—often with little success—thus aiding my self-awareness as raving perfectionist.

Still, this was the first car I could call my own, so naturally I loved it, warts and all. It wasn’t quick—with only 89 horsepower, 0-60 mph took nearly 15 seconds—and it leaned a fair bit in corners on its skinny radial tires. But it weighed barely a ton and the manual steering was light and direct, so it was fun to drive and super-easy to park, abetted by a high seating position and huge windows.

As noted, Simon Q. was a production ’tweener. It had the ’67 GT interior with a Thunderbird-style shift console, tachometer, and four ancillary gauges in a center dashtop pod. Yet it also had the new-for-’68 “Kent” 1600cc 4-cylinder engine (replacing a 1500) with crossflow heads—the same engine selected to power Formula Ford open-wheel racers.

Of course, I was constantly fussing with the car, pridefully trying to make it more distinctive without having much money to spend. It was mostly kid stuff: Union Jack decals, exchanging the plain door mirror for a cheap bullet-shaped “racing” type, blacking out the grille and taillight panel a la Lotus-Cortina. A genuine British “number plate” went on the front, donated by parental friends who’d brought back a Triumph Spitfire from Blighty. But the best mod came from a buddy who liked my Cortina so much that he bought one himself. Being mechanically inclined, he had removed the embryonic air-injection emissions-control hardware on his car and plugged the holes in the block with two-piece brass plumbing fixtures that cost tuppence. At my request, he did the same for Simon. The result was a much freer-revving engine and I’m sure at least 10 more horsepower. (Wink, wink.)

Simon and I had many good times together: running around town and country, tripping to a family reunion in Atlanta, and—most memorably—excursions to the 1969 and ’70 Daytona 24 Hours, armed with press passes (from the radio station). In fact, Simon served as an infield hotel room for the ’70 event. There’s nothing like falling asleep and waking up to the sound of racing cars all around you.

Upon graduating that summer, I used Simon for a planned move to Colorado. (No money for a moving van.) I loaded in as much of my worldly stuff as I could (which turned out to be quite a bit), plus two friends wanting to share the trip (a college chum and his new bride, who fortunately packed light). The 2,000-mile trek was uneventful, but it did take a toll. A few months after we arrived, for reasons still unclear, the 4-speed manual gearbox got stuck in a “5th gear,” which rendered Simon undrivable. It was the only time this British car left me stranded. In one of those strange scenarios that seemingly happen only to the young, I couldn’t afford the repair but somehow could afford to trade the Cortina on a used ’69 VW Fastback with 70K miles.

I didn’t think much about this at the time. I was too busy being my “own man”—and with trying to find a job. But I’ve since come to regret giving up on the Cortina so quickly. Maybe I should have tried harder to keep it in my life. Or maybe, like so many first loves, our relationship was fated to be brief.

I imagine Simon Q. has long since rusted away into the Rocky Mountains, but of course, I’ll never forget him. In fact, sitting on a shelf above me as I write this is a little Matchbox model of the old boy, one of the few things from youth that I’ve decided never to part with.

Thanks for the memories, old chap. You were a jolly good fellow. 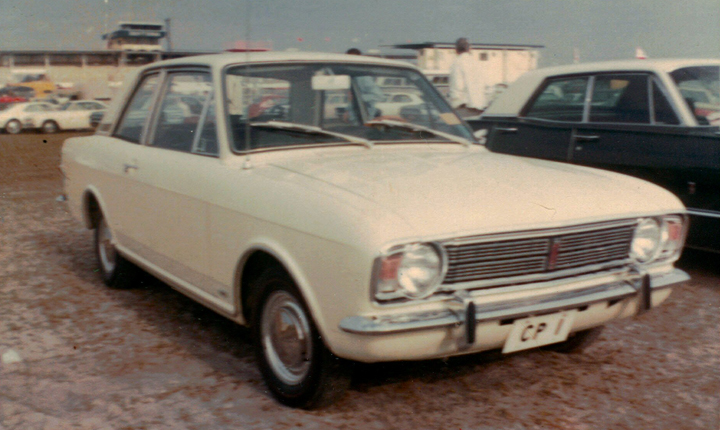 My Cortina parked at Daytona International Speedway in February 1969 for the 24 Hours of Daytona. I hadn’t done much to the car at this point, but notice the add-on “aerofoil” windshield wipers (which never parked fully down no matter what blades I used) and the plastic “CP 1” front license plate, a cheap, homemade homage to the “ST 1” that adorned the Volvo P1800 seen on TV’s “The Saint.” Incidentally, the big ’68 Mercury Park Lane next to my little squirt belonged to my college radio station boss, who had wangled press passes for us.

I again snapped the Cortina at Daytona in February 1970, only this time we had infield passes. As the story relates, by this point I had blacked out the grille and back panel and added a donated British number plate in front. I also splurged for a locking gas cap .

This angle shows the blacked-out back panel as well as the bolt-in cloisonne Union Jack that my folks bought in the UK especially for me. 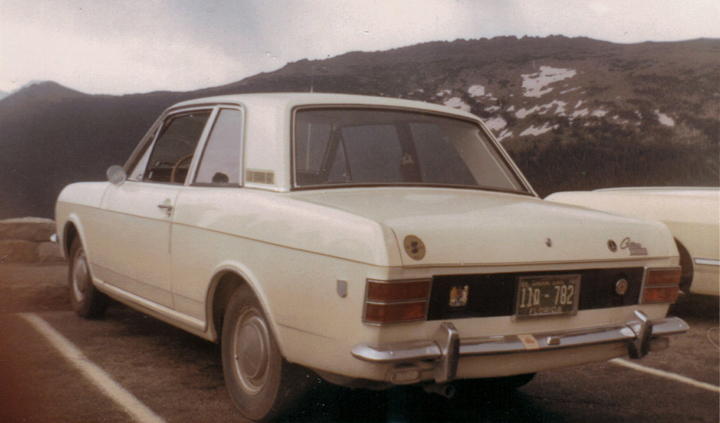 A view at the summit of one of Colorado’s mountain passes. I forget which one, when we were there, or why. I do know we were at 12,000 feet or so, above the “tundra line,” so no trees in the background. Note the “Ford Sport” sticker on the trunklid. The car is still wearing its FL plate; never did get a CO one.

Senior-Year Lust: The Coolest Cars of 1975