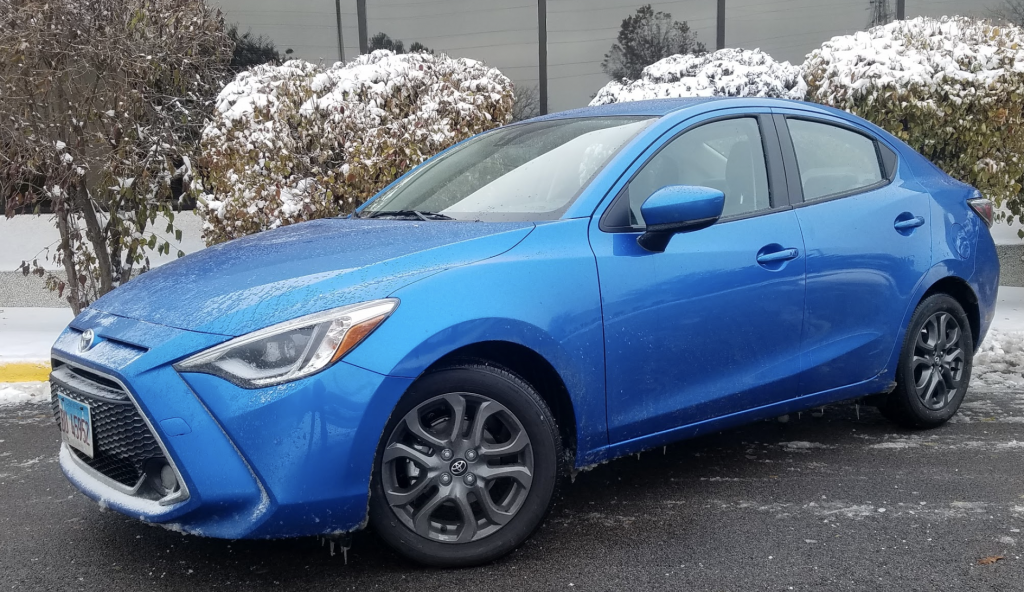 The great: Fuel economy, value for the money, standard features 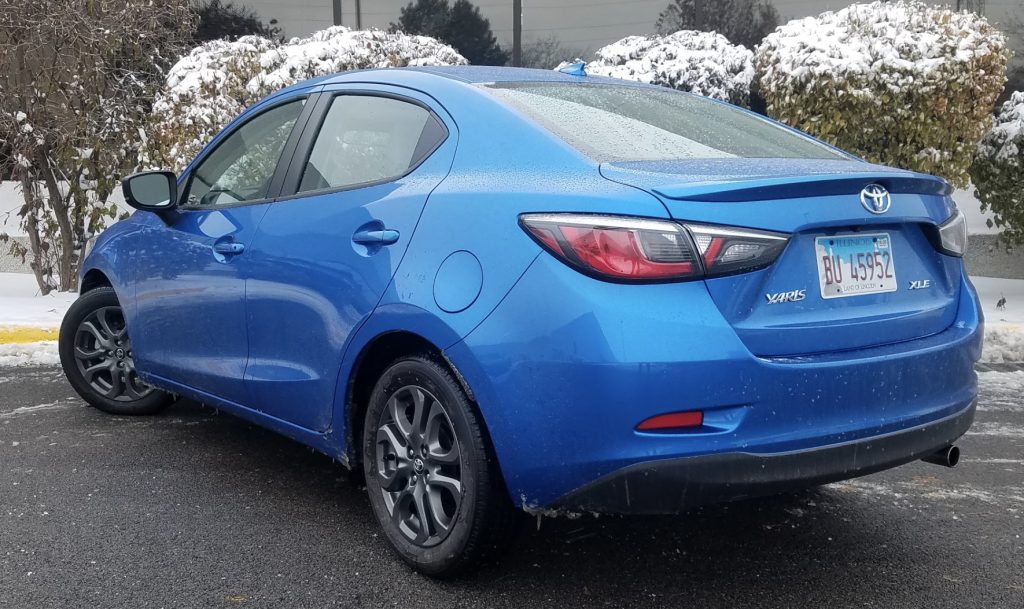 The 2020 Toyota Yaris XLE comes with some neat-looking dark wheels and a rear spoiler, both hinting at its frisky nature.

Why the clarification? Because what’s now sold as the Toyota Yaris … nee Yaris iA … nee Scion iA … is actually built by Mazda. And if you’re familiar with both brands, it’s easy to tell when you get inside.

The first clue is the control layout. And if there were anything we wish would have been “Toyota-ized” in the transition, it’s this. 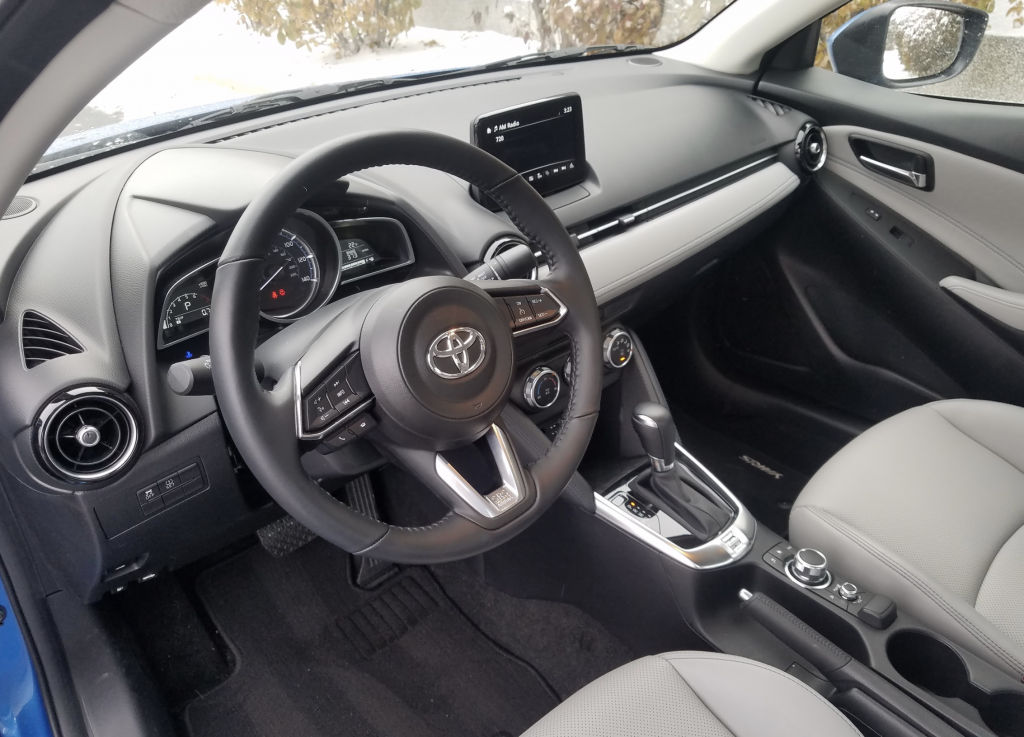 Aside from its nice-looking two-tone upholstery, there was nothing really fancy about the living quarters of our top-line XLE, as it was even missing a console box on which to rest your inboard elbow. Like other Mazda-built vehicles, the audio system is controlled by two console knobs–not our favorite setup.

As with all current Mazdas, the infotainment system is adjusted with console control knobs, with actions displayed on the dashboard screen. On older Mazda designs — such as this one — the screen becomes a touchscreen only when the car is stopped; on newer ones, it can’t be “touch” at all. So one could say the Yaris has that going for it, but any current Toyota design would be better.

But our only other complaint with the Yaris is what it doesn’t have — which is some coddling features we’ve come to expect in our typically loaded test vehicles. For instance, the upholstery is leatherette (fancy for “vinyl”), and there were no seat heaters, so it was cold sitting down in the winter weather we were having. And it’s important to note that this XLE is the top-line model, so it’s not as though you could get the bun warmers by spending more money. In fact, there are no factory options for the XLE, though you can get some accessories, the most notable being a navigation-system upgrade for $399.

As we did a full Test Drive of a virtually identical 2019 Yaris — right down to the Sapphire blue paint — we invite you to read that review for more details. But here we’ll touch on some additional impressions garnered from our 2020-model test. 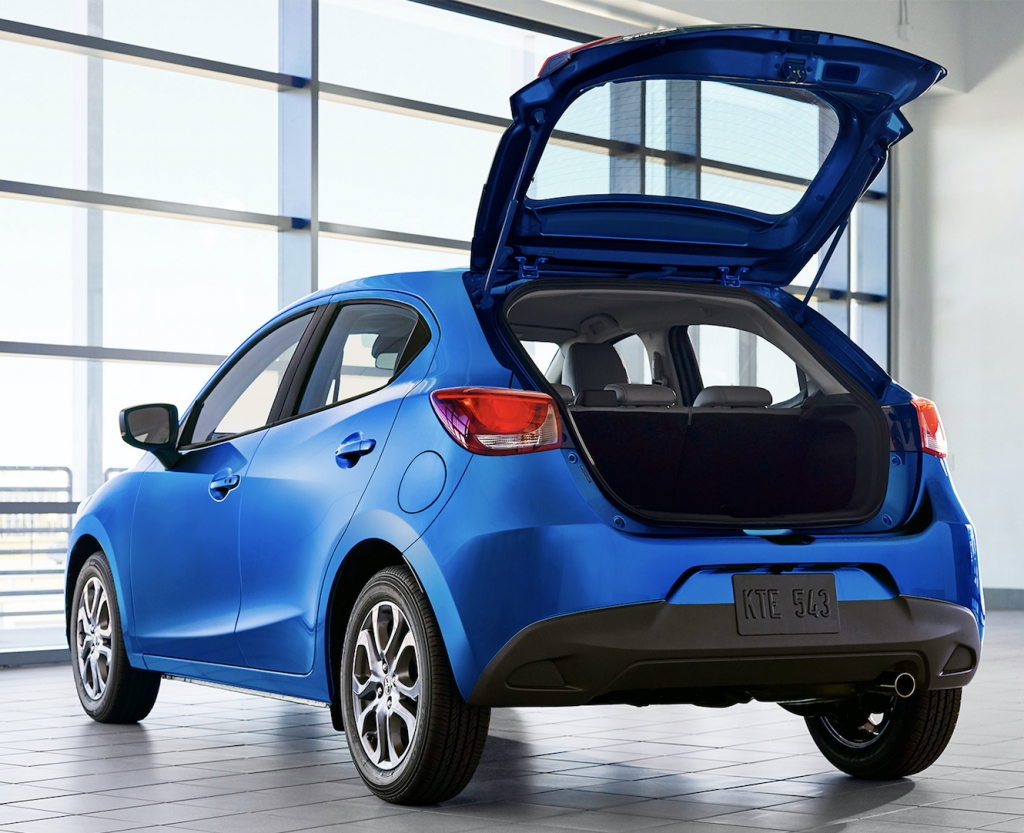 New to the Yaris lineup for 2020 is a shorter Hatchback model, which comes only in higher trim levels … and with a higher starting price.

First, although there are few changes for 2020, one is significant: Apple CarPlay and Android Auto are now standard across all three (L, LE, and XLE) Yaris trim levels. And there’s another, though “disconnected” somewhat: Added for 2020 is a Yaris Hatchback, which is a similar car (but with a shorter hatchback body style) also based on a Mazda design.

Last year’s test consisted of 75 percent highway driving, which netted us 38.5 mpg — close to the EPA Highway rating of 40 mpg, which is calculated using nearly all highway driving. This year’s test was 60 percent city driving, and we averaged 33.4 mpg — close to the EPA Combined rating of 35 mpg, calculated using 55 percent city driving. The bottom line is that this is a true 30-mpg car.

It’s also a surprisingly sporty one. Despite having just a 106-horsepower 1.5-liter engine and 6-speed automatic transmission, the Yaris feels rather spritely. Last year’s tester recorded an average of 9.28 seconds in the 0-60 dash, and while that’s hardly “racy,” the car never seems to be underpowered, except perhaps when accelerating to highway speeds or passing once there. Ride and handling are even stronger dynamic points, as road irregularities are decently well absorbed, and the car feels nimble in around-town driving. 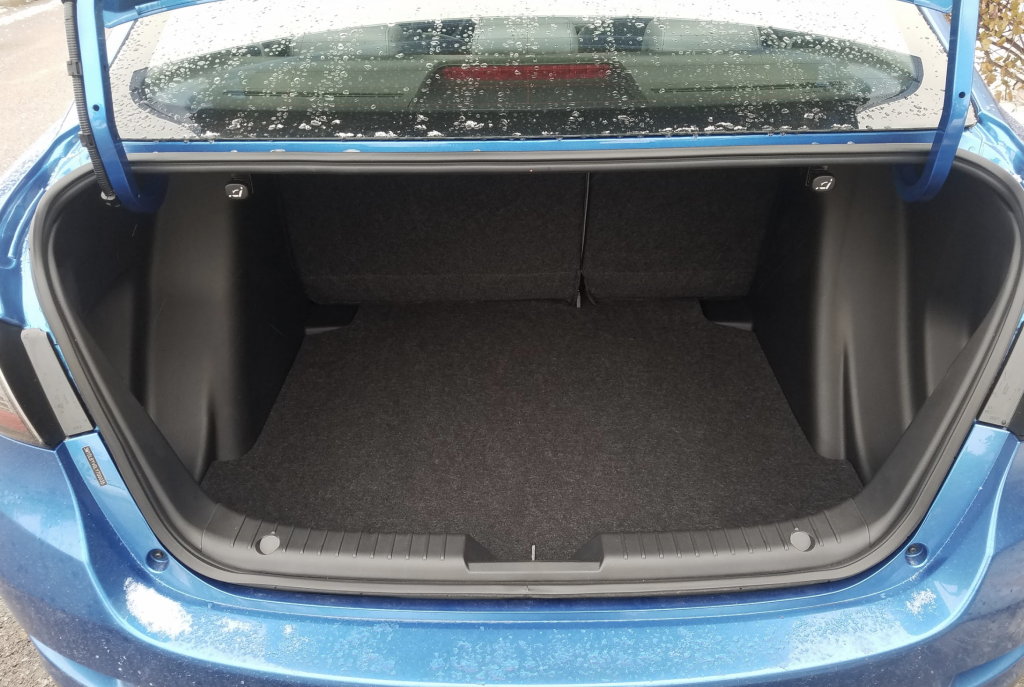 The little sedan has decent trunk space, but sickle-shaped hinges dip into the load area, and the folded rear seat backs rest about five inches above floor level.

As should be expected of a subcompact sedan, passenger space is limited for larger folks. Less expected is that cabin storage space is as well (there’s no console box, for instance). And while the trunk is of decent size, the sickle-shaped lid hinges dip into the load area and the folded rear seat backs rest about five inches above the trunk floor, though both are likewise typical in the class.

With standard low-speed forward collision warning and mitigation and newly standard Apple CarPlay/Android Auto compatibility, the 2020 Yaris — which in base L form starts at $16,605 with manual transmission and $17,705 with automatic (including the $955 destination charge) — makes for a great low-cost sedan. The new Hatchback only comes in upper-level LE and XLE trim with standard automatic transmission starting at $18,705, but that’s also reasonable. Either way, this is a car that should be on your list if you’re shopping for a low-priced vehicle with Toyota’s stellar reputation … even if it’s not actually built by the company.

It may be a product of “badge engineering,” but Toyota’s least-expensive model is a strong subcompact contender with a fun-to-drive personality and an impressive value equation. Just don’t expect a load of high-end available features.