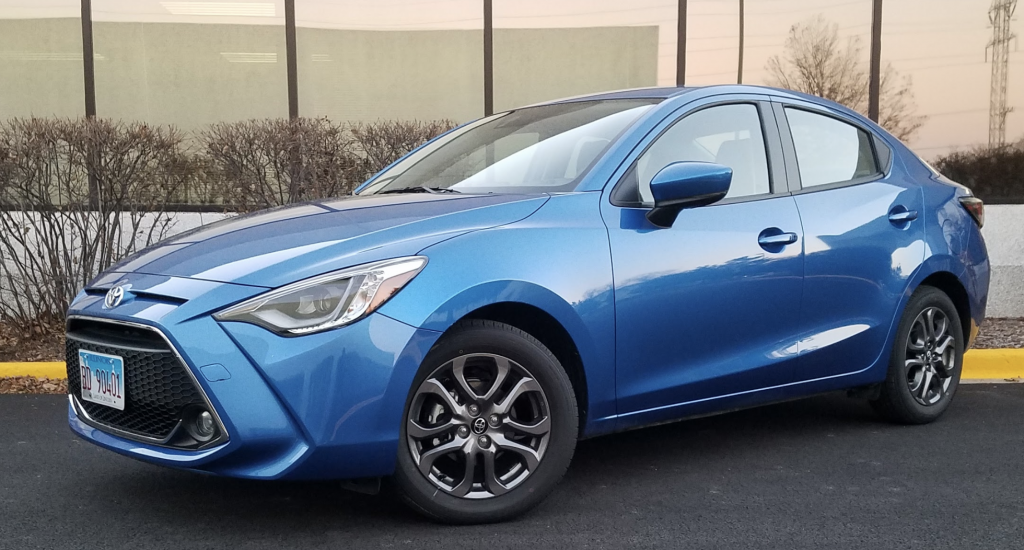 If you’ve ever had a hankering for a small Mazda sedan … Toyota will be happy to sell you one. 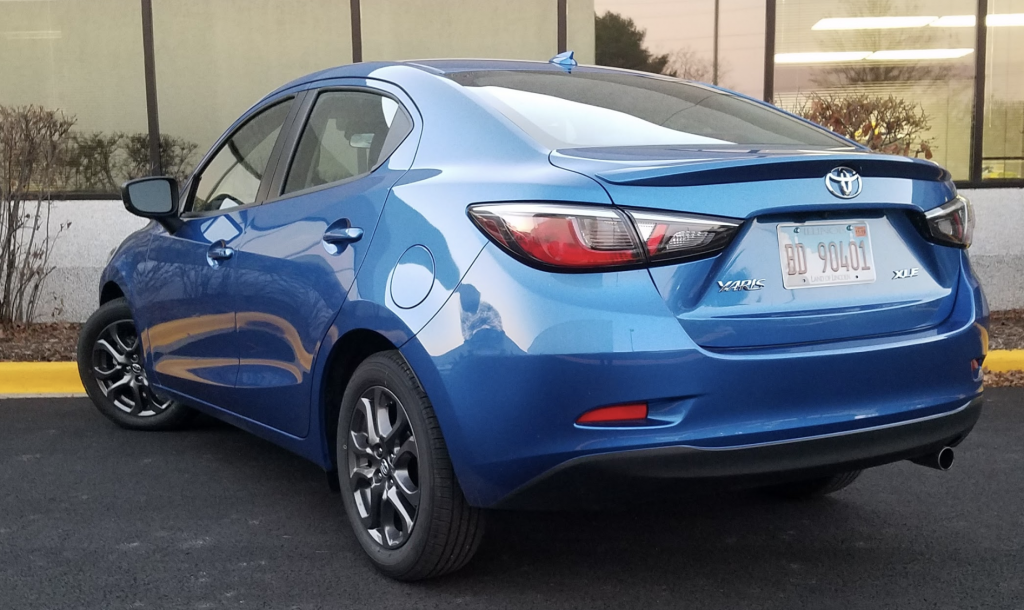 Our top-line XLE came standard with automatic transmission and forward collision warning with low-speed automatic braking for its $19,470 price, but it was missing some other luxury and high-tech safety features that are offered on most rivals — and that are not available on the Yaris, even as options.

Even in the world of strange automotive bedfellows, the Yaris’s pedigree stands out. Built by Mazda and sold in other countries as the Mazda 2 sedan, it first made its way to these shores as the Scion iA, being picked up by Toyota’s youth brand to fill a hole in the company’s meager model lineup. When Scion was dissolved after the 2016 model year, the iA was adopted by Toyota and branded the Yaris iA, joining the existing — but very different — Yaris Liftback.

In its first few years here, the iA stood out as a good car and a great value, enough so to be anointed with Consumer Guide’s Best Buy award. But times have changed, and unfortunately, the Yaris has not changed with them.

Although forward collision warning with low-speed emergency braking is a laudable standard feature, that’s about it from a high-tech safety-feature standpoint. And other commonly available features are also lacking here, including Apple CarPlay and Android Auto, along with much that would fall under the “luxury” category.

For 2019, there are three Yaris trim levels: base L, midline LE, and top-line XLE. The L starts at a very attractive $16,370 including destination and the LE at $17,370; for both, add $1100 for a 6-speed automatic transmission in place of the standard 6-speed manual. Topping the line is the $19,470 XLE, which comes standard with the automatic.

Our Yaris felt spunkier — at least around town — than its 9.28-second 0-60 time would imply, though it started to run out of breath at higher speeds.

Our test car was an XLE, so it had the automatic. Normally, that would suck the life out of a tiny, 1.5-liter engine with just 106 horsepower, but the Yaris only seemed as though it was running out of breath at higher speeds. It provided a decent full-throttle jump off the line, and at around-town speeds, good response to throttle inputs, thanks in part to quick downshifts. Only above 40 mph or so did progress slow, which was reflected in our 0-60 average of 9.28 seconds — still adequate for a subcompact car. Far better was fuel economy, which came out to 38.5 mpg in 25 percent city driving.

Also impressive for such a small car was the ride. Something this small and light should have fared far worse on our rough Chicagoland streets, but the little Yaris took all those imperfections in stride, while also feeling satisfyingly nimble — a tribute to its chassis tuning. When worked hard, the engine made a bit of a fuss, but the Yaris was otherwise acceptably quiet save for clangy door closings.

Visibility is just OK, though the rear headrests can be slid down to overlap the rear seat backs to free up the view behind, and the rearview camera not only shows a full 180-degree arc (so you can see both ways down a parking-lot aisle when backing) but it displays an unusually bright image at night. On the bad side, the sunvisors don’t extend when swung to the sides, leaving five inches of the window uncovered. 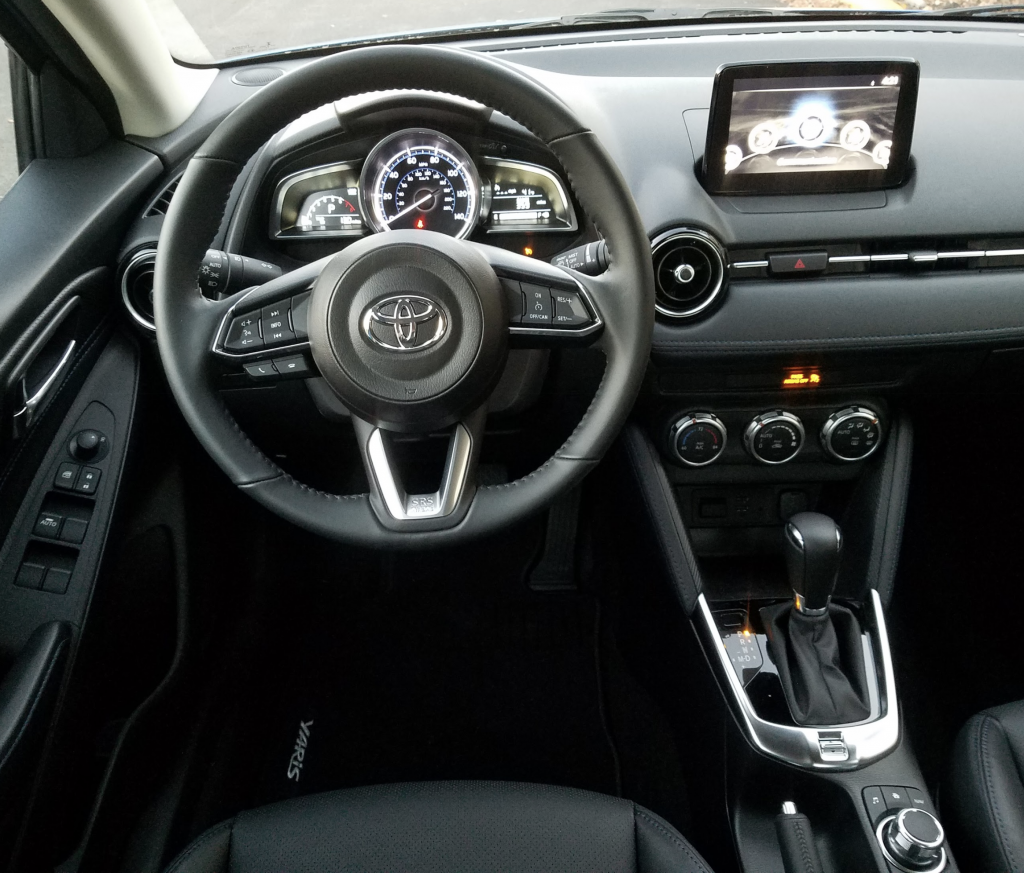 Not much is padded inside, yet the Yaris manages to avoid looking “cheap.” Most out of character for a Toyota is the console-control-knob infotainment interface, a carry over from the Yaris’s Mazda roots.

Anyone who’s been in a recent Mazda will instantly recognize the control layout. Unlike anything else Toyota sells, it carries over the Mazda infotainment-control strategy of using a console control knob for adjustments instead of the more common touchscreen, the latter of which we find far easier and quicker to use. By contrast, climate controls consist of three large rotary knobs placed within easy reach, probably the best layout ever devised.

Interior materials reflect the low price, as only the dash face and door armrests are padded. There’s no center console box or armrest, leaving interior storage space a bit sparse, but the glovebox is good sized and there’s a large front console bin under 2 USB/12-volt plugs.

Passenger room is also limited. Space in front is decent, though tall folks may feel squeezed, and though average-size adults can fit in back, they won’t if the front seats are far rearward. 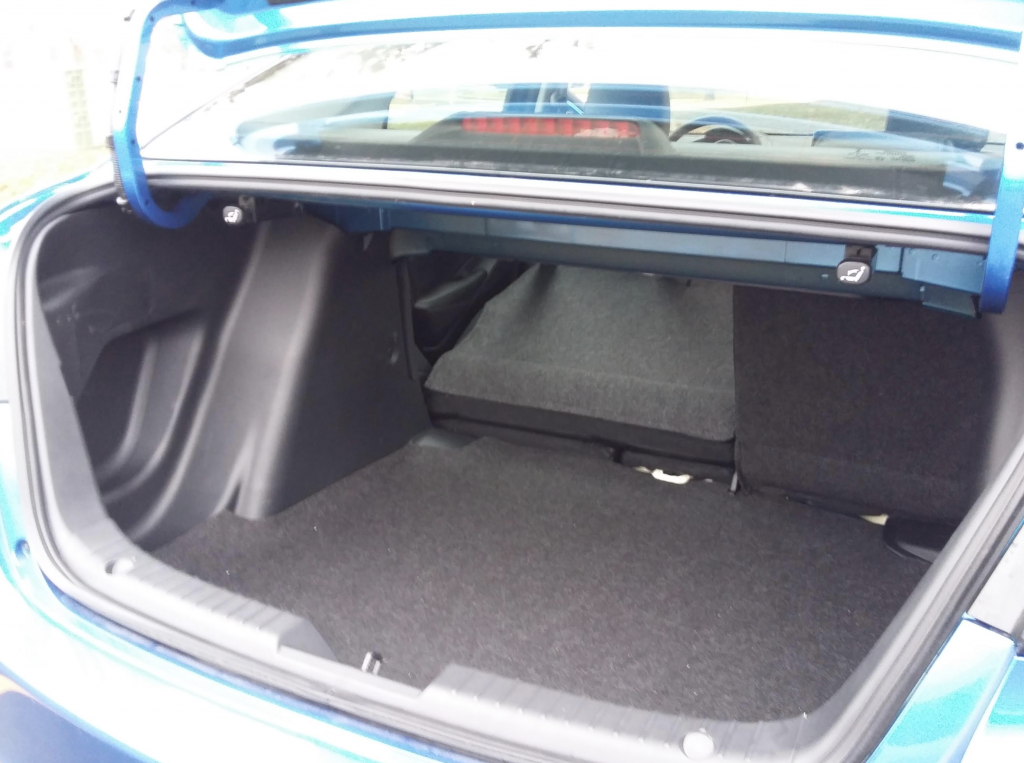 The trunk is quite roomy, but sickle-shaped lid hinges dip into the load area, and the folded rear seat backs rest about five inches above the level of the trunk floor.

By contrast, the trunk is fairly large for such a small car. It’s very wide at the rear and offers some additional stash space under the floor, though it narrows between the wheelwells, and sickle-shaped hinges dip into the load area. The rear seat backs fold via pull handles in the trunk, but they rest about five inches above the level of the cargo floor, which makes it difficult to slide long items forward — though that’s hardly unusual in sedans.

Because the rest of the car is quite good, it’s sad to see that the Yaris has fallen behind the times with its available equipment. But if you just want — or can only afford — a relatively basic car, Maz … er … Toyota’s little Yaris remains a top choice.

The de-Scionization of the Toyota Yaris is now complete.

The subcompact 4-door sedan that was the 2017-18 Yaris iA—after its 2016 debut as the Scion iA from Toyota Motor Corporation’s erstwhile “youth brand”—has been renamed simply Yaris (the Yaris hatchback is now called Yaris Liftback). In step with the name change are revised front-end styling, a changed rear spoiler, and a new steering-wheel design, among other minor revisions. Plus, the formerly single-trim car now comes in a choice of three trim levels—L, LE, and XLE.

One thing that hasn’t changed about this Yaris is its affordability. Even the top-line XLE that Consumer Guide tested didn’t crack $20,000. With delivery but no options it stickered for $19,470, and that fee includes previously unavailable features such as leatherette seats, rain-sensing windshield wipers, and automatic LED headlights. 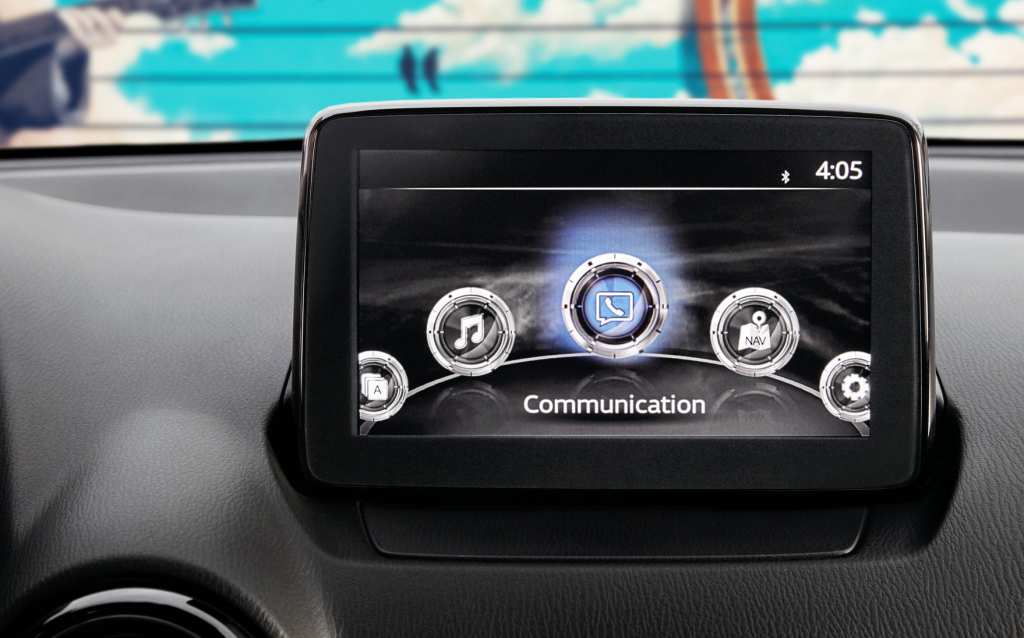 The Yaris’s infotainment-screen graphics should look familiar to anyone who has spent time in a late-model Mazda vehicle. It’s not a touch screen; functions are manipulated by way of a control knob located on the center console.

Otherwise, the story remains much the same as it was in the iA years. Power still comes from a 106-horspower 1.5-liter 4-cylinder engine, driving the front wheels through a choice of 6-speed manual or 6-speed automatic transmission—though the XLE is restricted to the automatic. The engine is nothing if not determined (peak torque is just 103 lb-ft), and there’s a little more zing—but more noise—with the “Sport” mode activated. Sport holds the transmission in its various ranges a little longer, helpful for getting up to speed for expressway entries and other quick-burst situations, but not so much for top speed. In any case, the trans doesn’t kick down quickly in midrange acceleration.

Courting Young Buyers in the New Economy: Scion’s Vice President on the New iA and iM

EPA fuel-mileage estimates for the auto-trans Yaris are 32 mpg city, 40 mpg highway, and 35 mpg combined. In his turn with the test car, this reviewer averaged 34.2 mpg from a 228-mile stint evenly split between city- and highway-style driving.

Modest dimensions make for easy maneuverability in confined spaces. Steering is light but still pleasingly direct. The torsion-beam rear axle is open to transmitting some good jolts to the cabin, but in the spaces between big bumps, the car’s ride is fairly calm.

The cabin will hold four adults of average build. (When yours truly parked his 5-foot-10.5-inch self in the seat behind the driver’s seat as positioned for his use, knees were up against the seat back.) The seats are comfortable and have a modicum of side support. Headroom is better up front than it is in back, where things are close but won’t muss your do. A tilt/telescoping steering wheel and a seat that’s adjustable six ways in the XLE help drivers find their happy place, but vision is restricted by thick pillars and the slope of the roof.

The almost-leather seats and real-leather covering for steering wheel, shifter knob, and handbrake lever make the cabin seem a little nicer than the price suggests. Patches of the “SofTex” seat material are also found in the centers of all doors and on the thinly padded front-door armrests. There’s also padding on the sides of the console where knees are likely to make contact—a nice touch that even some quite expensive vehicles don’t have. Hard plastic serves most other surfaces except for a vinyl-covered padded strip through the middle of the dash.

For storage, there’s a decently sized glove box; a large open console bin with USB, auxiliary, and 12-volt-electric inputs; two open cup holders in the console; and small front-door map pockets with bottle holders. Back-seat passengers will find just a pouch on the back of the front passenger seat and a small open bin/cup holder at the rear of the console for their use.

The Yaris is essentially a restyled version of the Mazda 2 sedan, a vehicle that Mazda does not offer in the U.S. market. Nowhere is this as obvious as in the control layout. Anyone who has occupied the front seat of the current Mazda CX-3 crossover SUV would feel at home in a Yaris. The instrument panel has the same large central speedometer flanked by little “wings” for ancillary gauges, and the same circular air vents bridged by a long horizontal chrome strip. Infotainment and climate controls are pure Mazda, too. The former involves a 7-inch touchscreen perched atop the dash, with its functions summoned through a Commander Control dial mounted on the console. Unfortunately, this system complicates almost all it touches, like audio presets, and it requires a lot of attention to operate. Separate climate controls are much easier to use, with individual dials for temperature selection, fan speed, and mode settings.

Trunk room is admirable for such a subcompact. A high lip may complicate unloading, but the floor is flat and wide, and the space is fairly tall and deep. Trunk sides behind the wheel houses are shaped to maximize width. When retracted, rear 60/40-split seats rest about five inches above the level of the trunk floor, and a bulkhead behind the seats also restricts items that can be extended into this bonus space.

And so, the last of the Scions is fully integrated into the Toyota lineup, the FR-S sport coupe having earlier become the Toyota 86 and the iM hatchback having been replaced by an all-new Corolla hatch. You can let out that breath you’ve been holding.

For those on a budget who want a sedan, the Yaris remains a great choice, even though it lacks some of the features offered by many rivals — which, admittedly, add to the price.