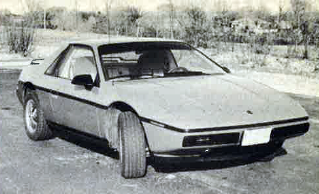 In order to sell General Motors brass on the idea of building a small, two-seat coupe, Pontiac marketing types made a few interesting concessions.

As this proposed car was conceived in the immediate aftermath of the second OPEC Oil Embargo, it was reasonable that GM product planners would expect a small car to be fuel efficient. A second mandate from on top came in the form of money—or lack thereof. Pontiac could build its little sportster, but it could not spend very much on development. Thus, the Fiero was born.

The folks at Pontiac had hoped to build a seriously capable small sports car, but the strict corporate requirements laid out for the vehicle killed that plan. Instead, Pontiac would settle for a sporty car that was at least exotic looking, with added bonus of being affordable.

A product of “parts-bin” engineering, the Fiero’s component manifest read like a list of GM architectures. The Fiero was known as the P-Car in GM parlance, and its rear transaxle came from the X-Car family (think Chevrolet Citation). As the Citation was front drive, and the Fiero rear drive, the drive unit needed to be rotated 180 degrees for use in the P-Car. The Fiero’s front suspension and steering hardware was donated from the T-Car (Chevette) with some modification to allow for the new car’s wider track. 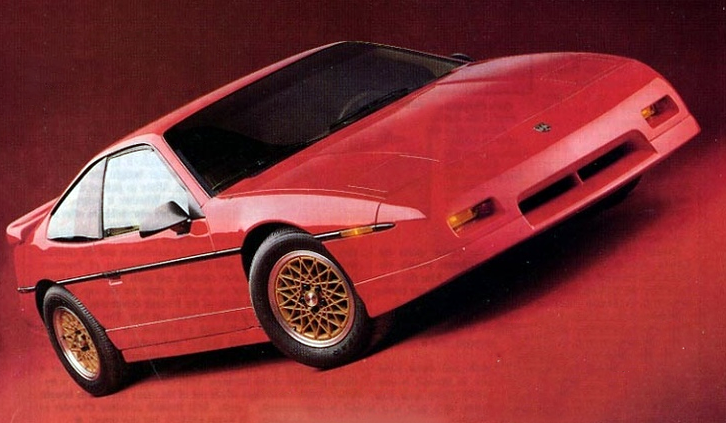 Finally, the Fiero made use of plastic body panels, the molds for which were far cheaper to produce than the dies for steel panels would have been.

While hardly a bargain Ferrari, the Fiero was initially well received. The “Plastic Pontiac” handled well, and was very aggressively priced. While its only engine, a 2.5-liter “Iron Duke” 4-cylinder also donated from the X-Car parts bin, was less than muscular, it moved the Fiero around with reasonable authority.

Primary complaints centered on the car’s heavy steering (power assist was not offered) and a lack of brake feel. Storage space was also an issue, but given the car’s sporty pretense, no one seemed to care that much.

Note that the base car, available for $7999 plus destination, came with an overdrive gear for the manual transmission and a conservative final drive ratio to optimize fuel economy. Stepping up to the Sport Coupe meant moving to a close-ratio transmission and sportier final-drive configuration for improved acceleration, but dropping from an EPA-estimated 25 mpg combined to 24.

Thanks to strong initial interest and a long model year (1984 Fiero sales began in the middle of 1983), Pontiac racked up an impressive 139,000 sales for the Fiero’s first season.

General Motors pulled the plug on Fiero after the 1988 model year, having found homes for a little more than 370,000 examples over the car’s run.

The Fiero enjoys a strong following today among enthusiasts and collectors, with later-model V6-powered Formula and GT models commanding the most money. Fiero fans will want to check out the Northen Illinois Fiero Enthusiast’s website as an example of the car’s popularity today.

Pontiac would give the two-seat sports-car thing another try with the Solstice, but the brand’s demise in 2010 would cut that little sportster’s time short. 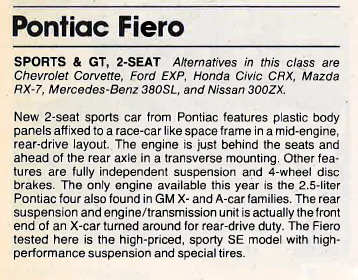 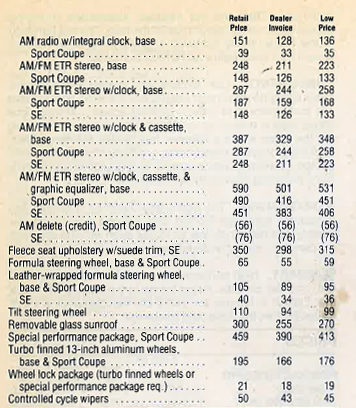