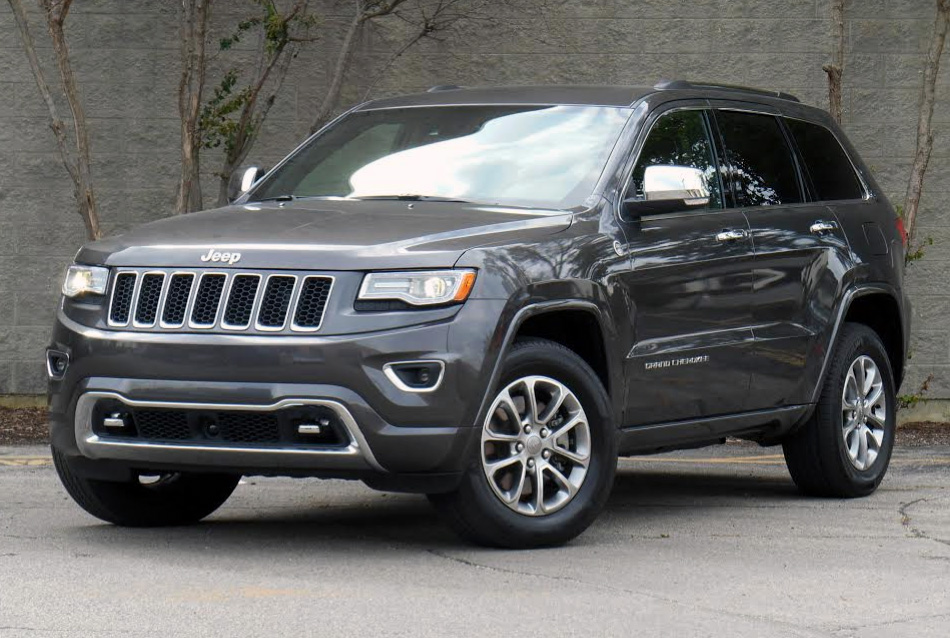 The great: Loads of power, spacious and luxurious cabin

The not so good: Middling fuel economy, near-luxury-level price as equipped

In its Overland version, the 2014 Jeep Grand Cherokee is a pretty deluxe rig that costs like a premium sedan. But it still brings solid Jeep attributes that remind you that this is a real sport-utility vehicle. 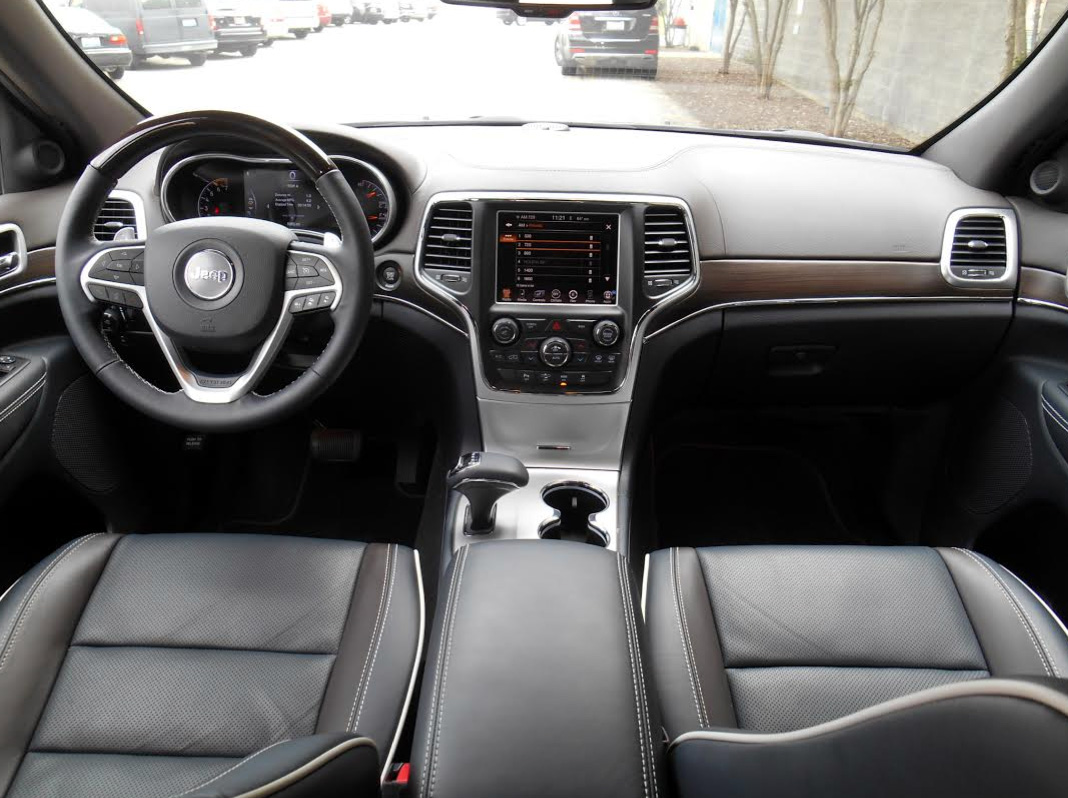 In Overland guise, the Grand Cherokee cabin looks and feels the equal of luxury-brand vehicles.

However, the CG test vehicle had the 5.7-liter Hemi V8 in place of the V6, heavy-duty brakes, and 3.09:1 axle ratio. Other add-ons were the Off-Road Adventure II package (18-inch alloy wheels and off-road tires, Quadra-Drive II 4-wheel drive, electronic limited-slip rear differential, and skid plates) and the Advanced Technology Group package (adaptive cruise control, forward-collision alert with crash mitigation, advanced brake assist, and blind-spot and rear cross-path detection). These options boosted the bottom line—with delivery—to a considerable $53,475. But the Quadra-Drive II, with its low range necessary for serious off-roading, makes the Grand Cherokee one of Jeep’s “Trail Rated” vehicles, and the 5.7 V8 gives it a class-leading towing capacity of 7400 pounds. Note, though, that these two options can also be had in lower-line models, so a highly capable Grand Cherokee can be had for a bit less. (Or for a bit more; a plush Summit model that starts at more than $50,000 tops the lineup.)

Maybe this sounds like a broken record, but with 360 bhp and 390 pound-feet of torque, the 5.7 V8 delivers plenty of power for responsive getaway, serene open-road cruising, and confident passing. In the Grand Cherokee, the 8-speed automatic transmission calibrated to this engine makes itself obvious as upshifts take place in situations like accelerating up on-ramps or taking advantage of openings in highway traffic. In most other situations, though, it’s quite unobtrusive. It’s a good thing the Hemi is designed with cylinder deactivation because it needs all the help it can get in the economy department. When this driver covered 169.1 mile in the test vehicle (63 percent of that under city conditions), he averaged a middling 16.30 mpg.

Even with the extra-cost off-road equipment, ride was nearly car comfortable, even eating up a pothole or two with more audible thump than tactile bump. Handling was easy, steering was responsive, and braking was secure.

The TFT instrument cluster and premium 8.4-inch Uconnect display work as well in the Grand Cherokee as they do in other Chrysler Group vehicles we’ve tested lately, which is to say quite well. Climate controls are a mix of rotary dials and buttons. Selection of 2- or 4-wheeling is by push button on the same panel from which surface-condition modes are chosen by the twist of an easily accessible console dial. Rear passengers have their own USB ports and controls for vents and seat heaters. 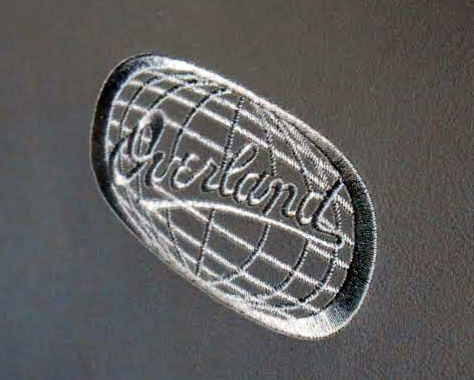 Above Overland, Grand Cherokee can also be had in opulent Summit and high-performance SRT trim.

While our test Grand Cherokee might have been set up to tackle some rugged terrain, there was no roughing it in the cabin. The Overland’s attractive interior features contrast piping and exposed stitching on the seats, soft-touch material on the door tops and arm rests, and accents of metal and wood on the instrument panel and doors. Front seats are comfy and the surroundings are spacious.

Rear seats are roomy enough for 3-across seating, thanks to a driveline hump that is surprisingly low-profile. Seat backs are not as deeply padded as in front, but the cushions are comfortable. A single lever controls the angle of the reclining seat backs or lets them fold forward for added cargo space. Leg room is not bad for adults, and scallops in the backs of the seats ahead try to stretch room even further.

Step-in is a little high front and rear—shorter or less-spry passengers may struggle with this a little—but the air suspension allows for a drop in ride height that can improve the situation a bit. Visibility in most directions is not bad, and wind and road noise were well stanched in the example we drove.

Interior storage up front is fairly generous, with pockets and bottle holders in the doors; 2 console cup holders; a small covered bin for electronic devices plugged into the USB port at the front of the console; a big glove box; and a bilevel console box with shallow tray over a deep, lighted console cubby with a 12-volt power plug-in. Rear passengers can take advantage of 2 net pouches, bottle holders in the rear doors, and a pull-down center arm rest with 2 cup holders.

The cargo compartment can hold a lot. Skid strips protect the carpet on the flat floor, there are tie-down hooks, and small open bins around the spare tire permit some underfloor storage space. Rear 60/40 seats fold almost flat, and hinged panels provide a smooth transition from the cargo floor.

The SUV buyer who values comfort as much as capability will find them in equal measure in the Jeep Grand Cherokee Overland. Just be prepared to pay for it.

You almost can’t think “Jeep” and not envision a rough-and-tumble, go-anywhere vehicle. But contrary to its original bare-bones persona, many of the latest models have gone upscale and taken the brand name with them. Witness our tested Grand Cherokee Overland, which – despite its smallish-midsize dimensions and 2-row seating – climbed the price scale to a sobering height of $53,475. Yikes.

But the Overland didn’t just carry an upscale badge; it also carried a lot of upscale equipment. John ran through the list, so I won’t repeat it, but it seems worthwhile to point out a few things. 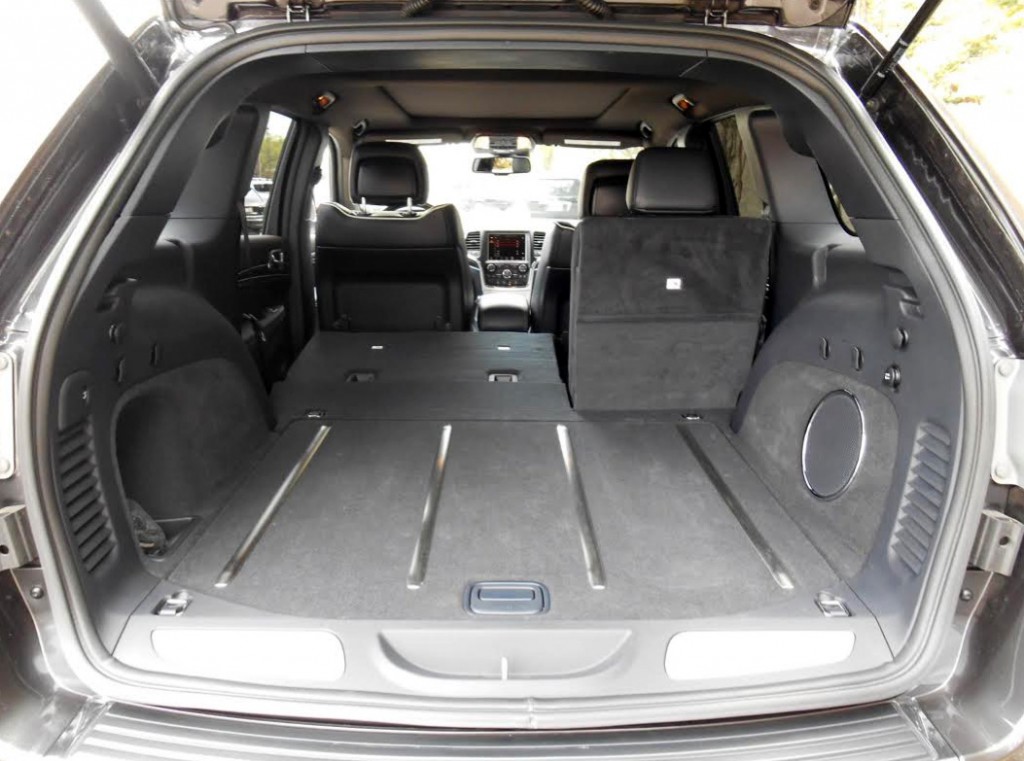 Overland used to be the leader of the lineup, but now it’s been topped by the Summit. Still, this is one nicely outfitted vehicle. While the dark-blue-and-brown interior color combo may not be to everyone’s liking, there would probably be general agreement that the furnishings were nearly first-rate. Dash and doortops were nicely padded, and the satin-finished wood looked classy, as did the silver panels, chrome trim, and wood-rimmed heated steering wheel. Even the cargo area got the high-end treatment, being lined with rich carpeting and accented with metal runners.

Ever since driving the first generation that debuted back in 1994, I’ve always sensed an odd side-to-side motion over bumps and swells in Grand Cherokees that I can’t recall feeling in any other vehicle – as though it’s walking on tip toes – and what seems like an over-reaction to bumps; not harsh in any way, just more vertical body motion than expected. And it persists in this one. It’s subtle, to be sure (I rarely hear other people mention it), but it’s noticeable to me nonetheless. Otherwise, I have no complaints about ride quality, particularly for a vehicle with such impressive off-road prowess.

And then there’s the power. Grand Cherokee is the only midsize SUV to offer a V8 anymore, and though most competitors generally aren’t lacking for oomph, they might be if loaded to the gills. No such concern with our Hemi-powered tester. Furthermore, the 8-speed automatic kicked down fairly quickly for passing.

Partial payment for the off-road prowess comes in the form a rather high step-in, which shorter folks may find awkward. And for a midsizer, rear-seat room isn’t as spacious as in many competitors. Also, drivers may notice that the thick front and “thickish” side pillars block some of their view, though the rear pillars aren’t nearly as bad.

Certainly the Grand Cherokee’s greatest strengths are its off-road ability and – at least in V8 form – impressive towing capability. If neither of those are of importance to you, other midsize SUVs would probably be more practical, and almost certainly less expensive. But then you wouldn’t be driving a Jeep. And that name still carries a heavy dose of macho imagery.