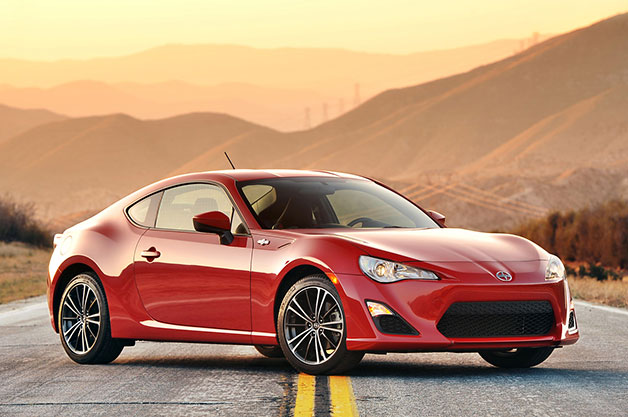 The not so good: Firm ride, limited in-cabin and trunk storage space

The Scion FR-S is a car for speedy minimalists.

For starters, there isn’t much of it at just 166.7 inches long and a curb weight of about 2800 pounds. The dashboard and door panels are covered in austere hard plastic. There’s a central touchscreen, yes, but it displays simple audio and climate controls. Satellite radio and a navigation system aren’t even available. There’s limited cabin storage space and not much trunk (though the rear seatback folds as a unit to extend cargo space). The tiny back seat has subadult headroom. 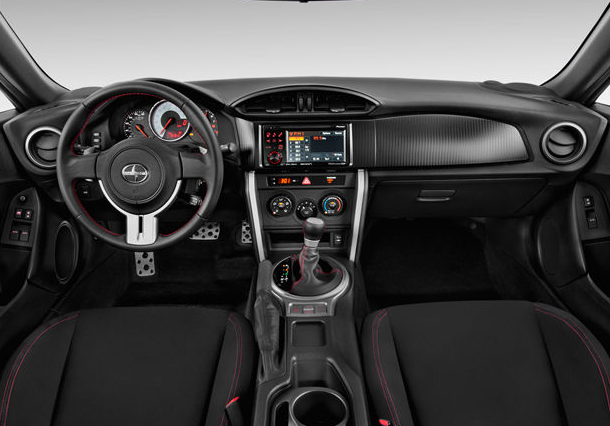 FR-S’s tidy cabin can be a tight squeeze for larger drivers, and lacks meaningful small-item storage bins and cubbyholes.

About all you’re left with then in the FR-S is a really fun-to-drive little sports coupe.

Power for this product of Toyota’s “youth-oriented” brand comes via Subaru in the form of a revvy 2.0-liter “boxer” 4-cylinder that makes 200 horsepower. Though not a torque monster (just 151 pound-feet at 6600 rpm), I still found it flexible enough to keep stop-and-go driving from being a chore, and when the test car was run through an autocross course, it consistently sounded a chirp from the rear tires when going into 2nd gear. One thing I had my fill of quickly, however, was the engine drone. Running the car up from Chicago to Road America in Wisconsin for our regional press club’s annual spring rally, this din was an imposing and omnipresent “companion” for 3 hours.

The car in this test had the 6-speed manual transmission. (A 6-speed automatic with paddle shifters is available.) The clutch was nicely balanced and easy to modulate. The shifter was notchy, but direct enough to prevent screwing up a shift.

Ride is very firm, and you can expect a good jolt if you hit any broken pavement. With the stiff underpinnings and petite 101.2-inch wheelbase, a washboard stretch of Interstate north of Milwaukee set me up for miles of unpleasant hop. At least that distracted me from the engine noise for a while.

To the good, the FR-S corners with almost no lean. Flung through the autocross, it playfully wanted to flick its tail out a couple times, but was easily catchable. The ventilated disc brakes were quick and powerful, and stopping came without nosedive.

Here’s a bit more good news: On the return from Road America, I was able to test for fuel mileage, and my stint of 181.1 miles (only 23 percent of which consisted of city driving conditions) showed an average of 30.77 mpg. The EPA’s mileage estimates for the manual FR-S are 22 city, 30 highway, so the test car overachieved a little.

The 8-6 badge pays tribute to both the FR-S’s “boxer” engine, and the enthusiast-loved rear-drive AE86 Toyota Corollas of the mid Eighties.

While a little skimpy on the creature comforts and ambience, the FR-S is ready for business in the intimate cockpit. A grouping of clear, easy-to-read gauges confronts the driver, with a black-on-white tachometer positioned front and center in the cluster. The leather-wrapped steering wheel has built-up grip points on the rim. Stoutly bolstered cloth seats (with red contrast stitching for a touch of color) keep driver and front passenger firmly planted when the going gets twisty.

Why the Scion FR-S is a Consumer Guide Best Buy

Compared to other small cars, a $27,000 FR-S is extravagant in its impracticality. But not everybody is after 4-door convenience, a sunroof, and industrial-strength luggage space. With the FR-S, the “frills” are in the mechanics, not the amenities, and if your priority is confident, pulse-quickening performance, it’s not too great a price to pay. 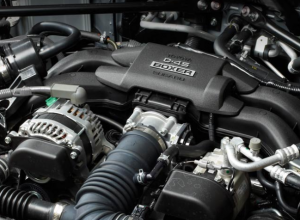 Though the FR-S not without its compromises, this is a true enthusiast machine that is affordable enough for young folks to buy and livable enough to use as a daily driver. Acceleration from the 200-horsepower four is middling at lower rpm, but is quite peppy higher in the rev range… extracting the best performance from this engine means honing your skills on the slick-shifting 6-speed manual. The engine doesn’t rev as eagerly as I would like, but it’s plenty entertaining once it gets above 5000 rpm. Our tester had an optional TRD exhaust system that is recommended for enthusiasts only, and maybe not even then… it tacks on a whopping $1100 and makes the engine drone loudly in freeway driving. The chassis/suspension is wonderfully balanced and communicative in spirited driving, yet decently absorbent over bumps and rough pavement.

Passenger and cargo room are never strong points in a sports car, but the FR-S does a bit better than expected. The trunk is shallow, but I still managed to fit the contents of a grocery run in there without a hassle. There is enough space for a couple carry-on suitcases for sure. I’m 6’6″, but I still had adequate headroom and legroom in the driver’s seat. However, the seating position is very low, which means entry and exit can be challenging. I wished for a center console armrest too, though I realize that they had to put the cupholders somewhere! The FR-S is an intriguing blend of serious sports-car soul and everyday commuter-mobile practicality, and for the most part, it delivers the best traits of each of those diametrically opposed goals.