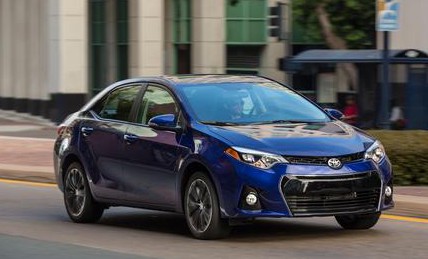 The not so good: Firm ride, less-than-sporty handling

Click here for more information about the Toyota Corolla

As other companies seek to move their compact cars further upmarket, so too does Toyota with its Corolla. It is redesigned for 2014 with new styling and features, improved interior materials, and more cabin space and sound insulation. At 106.3 inches and 182.6 inches, respectively, the car is longer in wheelbase and overall length than the model it replaces.

The 2014 lineup includes L, LE, LE Eco, and S models, with various trim and equipment levels within each. Consumer Guide® got to try out the “sporting” S with top-end Premium equipment. 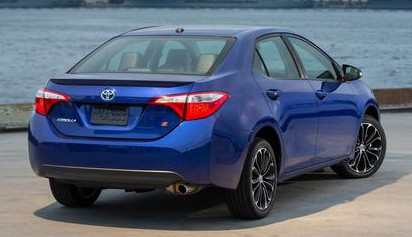 A mainstay of the product mix since the late ’60s, when Toyota was starting to hit its stride in the U.S. marketplace, the Corolla has come a long way since then. Standard on all ’14 models are air conditioning, power windows and locks, Bluetooth connectivity, and LED headlights—the last a feature that’s typically found on luxury cars and SUVs. Depending on trim level, other available features include a rearview camera, push-button engine start, power sunroof, vinyl “leatherette” upholstery, steering-wheel paddle shifters, and a touchscreen audio display with Toyota’s Entune infotainment system.

Check out our compact-car Best Buys

The Corolla first came ashore in the States as a small, affordable “starter” car, and it still pretty much is one. Over the years, some of its market rivals have served as the bases for genuinely racy pocket rockets. The current Corolla S isn’t anywhere near that level of involvement.

The S uses the same 138-horsepower 1.8-liter 4-cylinder engine found in all other Corollas but the LE Ecos. The Premium comes only with a continuously variable transmission (CVT) that behaves like an automatic—though the S Plus variant can be had with a fully manual 6-speed gearbox. For use in the S models, the CVT has had the feel of stepped gear-transmission shifts added to it. Steering-wheel paddles and a console-mounted shift lever with tap-shift capability are also on hand for those who want the feel of manual control. 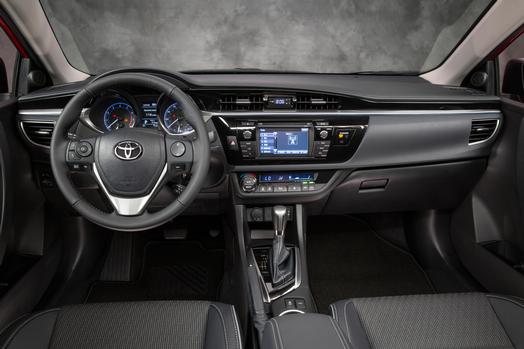 Corolla’s controls are refreshingly simple to use. Cabin materials are just average, trailing the finish of the Chevrolet Cruze and Honda Civic.

There’s some life to the 1.8 engine, with sufficient oomph from a standstill and enough strength on the highway to get around safely—and without much racket. Ultimately, though, the powerplant is no fireball. This tester did his driving in the normal drive mode (a button-activated “Sport” mode modifies “shift” points on the CVT), covering 119.9 miles. Gas mileage came to 28.25 mpg, seemingly not too bad considering 72 percent of miles driven were under city conditions. However, the EPA ratings are 29 mpg city/37 highway, with a combined figure of 32 mpg, so by those metrics, meh.

Similarly, there’s nothing that betrays anything especially sporty about the ride and handling. In fact, ride was somewhat harsh over road imperfections that lots of other cars would have tapdanced over. Steering is done with an electric power assist. S Plus and Premium cars have 4-wheel-disc brakes and 17-inch alloy wheels wrapped in 215/45R17 tires. Some wind noise was prevalent, and there were a few squeaks and rattles in the cabin.

In a day when passenger-car interiors are dominated by dramatic, scultped lay-back instrument panels, the Corolla goes old-school with a very upright and linear design. S drivers are directly confronted by tachometer and speedometer dials on either side of a vehicle-information display that’s easy to read. At the absolute geographic center of the dash is the 6.1-inch touchscreen that displays audio settings, the back-up-camera view, and—when equipped—navigation. Below this are climate controls with a dial for temperature and a small row of function buttons. (Mode and fan-speed buttons are repetitive-press.) 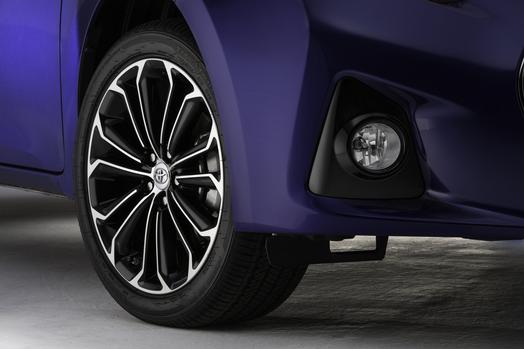 These 17-inch wheels are unique to S-model Corollas.

The interior features quite a bit of hard plastic on door panels, the lower dash, and console. The steering wheel in the S Premium is clad in leather, and seats are “SofTex” vinyl. Front seats are comfortable enough but not so stoutly bolstered as to serve as “sport seats.” Rear seats will accommodate three familiar adults, helped out by an extremely minimal central tunnel. Leg and head room are good front and rear—in fact, stretch-out room in back is surprising. Drivers get a dead pedal on which to comfortably rest their left foot.

Storage space in front consists of a covered console box that’s deep but not so long, 2 open cup holders, a small open bin (with power and USB plug-ins) in front of the shifter, and a fairly roomy glove box. Rear storage is confined to a pouch on the back of each front seat, and cup holders that pop out of the back of the console. All 4 doors have pockets with bottle holders, but the rear pockets aren’t terribly long.

The squarish trunk is ample for a small car, though the load floor narrows between body structures ahead of the wheel houses. Liftover is pretty low for easy loading. Rear seats fold for added capacity, but they don’t fold flat and sit a few inches higher than the trunk floor.

The Corolla S Premium delivers all this and fog lamps, heated exterior mirrors with integrated turn signals, a decklid spoiler, 8-way power-adjustable driver’s seat, cruise control, and remote keyless entry for $20,400. However, the one we tested was “loaded” with a $1510 Driver Convenience Package that brought with it a long list of items that notably included navigation and push-button starting, and the stand-alone power moonroof. With these options and delivery, our tester came to $23,570. However, considering that other models lower on the Corolla family tree offer much the same performance, there’s no need to spend that much, which improves the small Toyota’s value proposition.

The Corolla is one of the most “Toyota-ish” Toyotas around. It has a middle-of-the-road, please-the-masses design; solidly assembled (if a bit mundane) interior materials; an air of practicality and value throughout; and very little in the way of driving excitement. That’s enough to make it one of the best-selling compact cars around, thank you very much, but be advised that there are several class competitors that meet or exceed Corolla’s levels of fit and finish, available features, and fuel economy… all while offering significantly more fun behind the wheel. (The Mazda 3 and Ford Focus are a couple examples that come to mind.) Still, this Toyota is not without its charms. Its high points include a back seat that is among the most spacious in the class; a refreshingly simple, easy-to-use control layout; a tight turning radius and nicely boosted steering for easy close-quarters maneuverability; and pleasant-for-the-class ride quality.