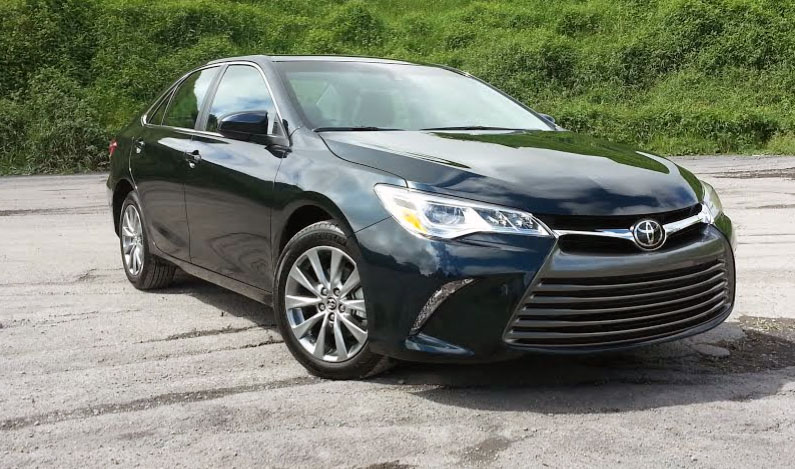 There’s no question that the Toyota Camry is a sales juggernaut. It’s been the top-selling car in America for 12 years running. If the Camry were a brand all by itself, it would rank tenth among North American automakers, ahead of Subaru and Volkswagen.

The current-generation Camry is only three model years old… it debuted in 2011 as a 2012 model. Auto manufacturers often do a “mid-cycle refresh” at this stage of a car design’s life span, adding minor updates such as new front and rear fascias, an updated instrument panel, and/or some new technology features.

However, a lot has changed since 2012 in the midsize-sedan class. Ford unveiled a breathtaking clean-sheet redesign of the Fusion for 2013. The Chevrolet Malibu, Honda Accord, and Nissan Altima were also redesigned for 2013, and the Malibu got another significant update for ‘14. A fantastic all-new Mazda 6 debuted as a 2014 model. The Chrysler 200, Hyundai Sonata, and Subaru Legacy/Outback are all impressively redesigned for 2015. Faced with such a formidable roster of new or recently redesigned (and improved) rivals, Toyota chose to go much further than the typical mid-cycle refresh on the 2015 Camry. At the same time, the company was careful not to mess too much with the Camry’s winning formula. The essence of the car remains the same… it’s just been enhanced. 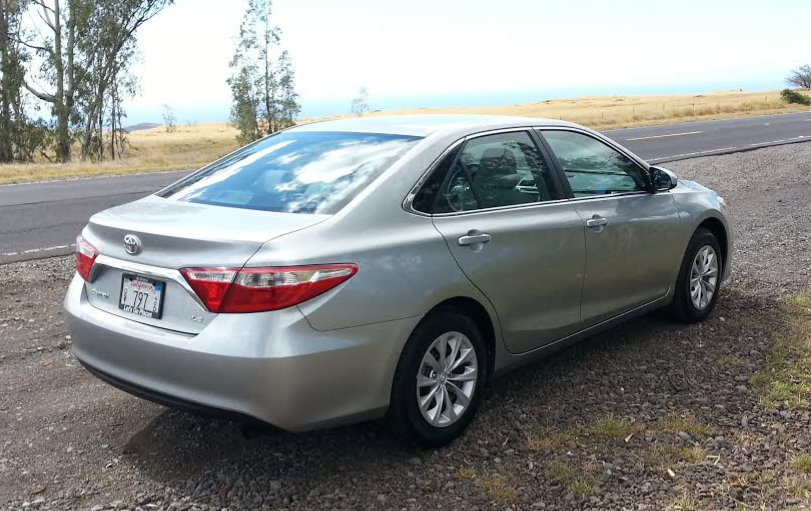 Sixteen-inch steel wheels with hubcaps are standard on the entry-level Camry LE model. Save for the roof, all body panels are new for 2015.

The Camry’s basic body framework doesn’t change in dimension, so passenger and cargo room (which are perfectly competitive as-is) are unchanged. However, the internal structure has been fortified with 22 additional spot welds, which improves its rigidity. Toyota says that the stiffened body structure enables them to more finely dial in the Camry’s suspension and electric power steering system. The track is slightly wider (by 0.4 inches), and each Camry trim level has its own shock tuning. 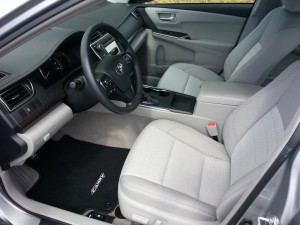 The LE’s cloth interior is about as basic as a Camry cabin gets.

The exterior is virtually all new; the only body panel that hasn’t been changed is the roof. The fresh bodywork increases the overall length by 1.7 inches, and, along with the sleeker headlights and taillights, gives the new Camry a mildly swoopier look. The model roster now ascends through entry-level LE; sporty SE; sportier, new-for-2015 XSE; and top-line XLE trim levels (the base L model has been discontinued). The Camry Hybrid continues in LE, SE, and XLE trim.

Thinking about a used Camry?

All 2015 Camrys get a redesigned and upgraded interior with more soft-touch materials and a revamped dashboard with a standard 6.1-inch- or available 7-inch touchscreen. A backup camera is now standard on all models, and a new 4.2-inch Multi-Information Display (MID) digital readout in the instrument panel is standard in all but the base non-Hybrid LE model. It can display a broad range of info, such as vehicle settings, a navigation screen, audio info, Bluetooth phone-call info, and direct-tire-pressure-monitor readings. We’re glad to see this addition, since many of Camry’s competitors already have similar systems.

The interior ambiance ranges from clean and sensible on a base-cloth LE or SE model to surprisingly ritzy on a decked-out XSE or XLE. On all models, the contrasting French-seam stitching and leather-wrapped look of the dashboard add to the upscale feel. The XSE might be the most dazzling in this regard, with its copious red contrast stitching, satin chrome accents, and “UltraSuede” upholstery inserts. Note, however, that the suede-like seat inserts can feel extra-warm on a hot day, and unlike some class rivals, the Camry does not offer cooled or ventilated seats. And one penalty of the Camry Hybrid is that it doesn’t get a 60/40 split-folding rear seat like other Camrys. The hybrid-system hardware means that only one side of the Hybrid models’ rear seat folds, and the opening it unveils is very stingy. 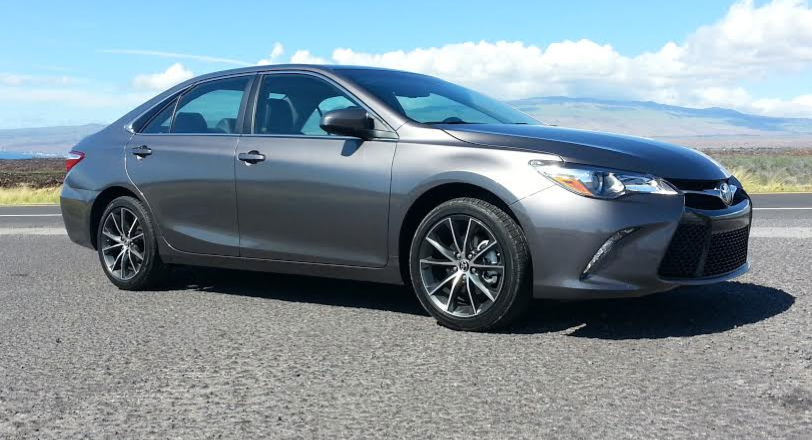 With its attractive 18-inch wheels, sport suspension, and mesh grille, the XSE model is the most dynamic Camry.

The overall dashboard layout isn’t much different than before, but that’s OK… we’ve got no quarrel with the Camry’s simple, straightforward controls. We especially appreciate Toyota’s tendency toward large buttons, which are especially easy to see and use while driving. This also holds true for the virtual “buttons” of the intuitive touchscreen system. 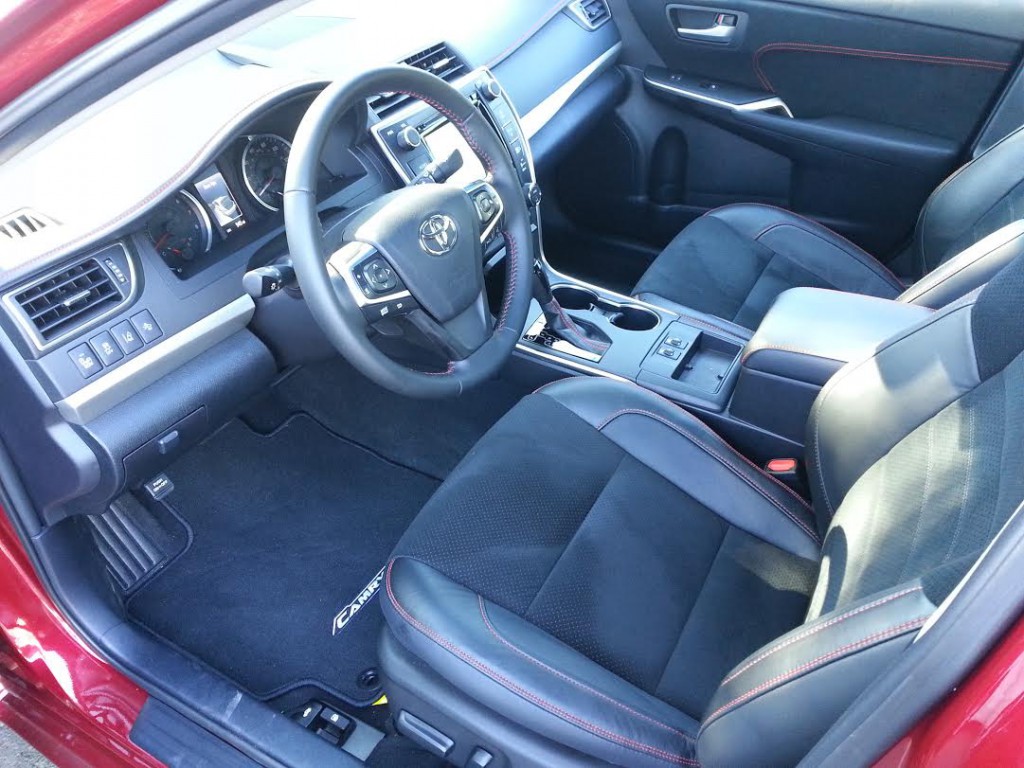 Speaking of that touchscreen system, it offers some new multimedia features this year. The available Entune App Suite utilizes a compatible smartphone to offer services such as Bing, iHeartRadio, MovieTickets.com, OpenTable, Pandora, and Yelp, as well as real-time info such as traffic, weather, fuel prices, sports, and stocks–all without requiring a subscription. To help keep the system up to date, the audio unit is capable of downloading new Entune apps as they are developed. Another new available feature is a wireless phone/device charger that enables compatible cell phones or MP3 players to be charged simply by placing them on a non-slip surface in the forward console bin… no plugging in necessary.

The 2015 Camry sports the expected roster of standard safety equipment, along with available lane departure warning and a blind spot monitor with rear cross traffic alert. New for 2015 are adaptive cruise control and a Pre-Collision System, which are bundled in an Advanced Technology Package offered on XSE and XLE models. The Pre-Collision System uses radar sensors to detect oncoming obstacles, emits visual and audible warnings, and can automatically apply maximum brake pressure if a collision seems imminent. These additions are more a case of Toyota keeping up with the competition than striking out on new ground.

We’ve highlighted the lengthy list of changes that Toyota has made to the 2015 Camry, but there’s one area we haven’t mentioned yet: the powertrains. That’s because they haven’t changed at all. The 2.5-liter 4-cylinder hasn’t been substantially revised since it debuted in the Camry for 2010, and the 3.5-liter V6 has been plugging along unaltered since it first showed up when the Camry was redesigned for 2007.

We’d complain that Toyota seems to be hanging on to these long-in-the-tooth engines, but darn it if they aren’t still laudable and competitive in terms of smoothness, power delivery, and fuel efficiency. As before, the 2.5-liter 4-cylinder is rated at 25 city 35 highway. The 3.5-liter V6, which is now available only in XLE and XSE models, is rated at 21/31. (Both engines are still mated to an alert, smooth-shifting six-speed automatic transmission.) Those numbers are right in the ballpark of most midsize-sedan competitors… and maybe two or three mpg shy of the leading EPA numbers in the class. 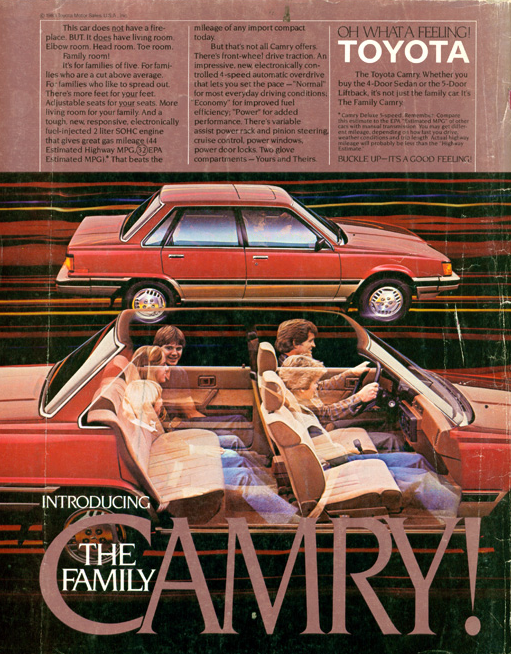 Naturally, the Hybrid does much better. Its 2.5-liter Atkinson-cycle 4-cylinder/electric-motor powerplant debuted for 2012, and is mated to an electronically controlled continuously variable transmission. It’s EPA-rated at 43 city/39 highway/ 41 combined. The Hybrid can operate in EV mode for up to 1.6 miles all-electric at speeds below 25 mph. Its ECO mode optimizes throttle response and air conditioning output to help prioritize fuel economy.

However, if you dismiss the Camry Hybrid as a gutless greenie-machine, you’re making a mistake. Despite having the best fuel-economy rating of the three Camry powertrains, the Hybrid is actually quite a bit faster than the 4-cylinder models, hitting 0-60 mph in a very respectable 7.6 seconds. And, this hybrid powertrain is one of the smoothest around. Transitions from gas to electric power are exceptionally smooth, and there’s very little of the bogging and surging that sometimes plagues hybrid vehicles. Likewise, the brakes are very smooth, progressive, and easy to modulate for a hybrid. Note also that Toyota offers the Hybrid as an SE model, which delivers both outstanding fuel economy and improved handling.

In addition to a Hybrid SE, we got behind the wheel of a base LE and a XSE V6 model during our Camry preview test drives. On all of them, we noticed a significantly quieter ride. Toyota has improved the insulation and taken other noise-reduction measures (such as an acoustic windshield on V6 and Hybrid models), and the effort has paid off. Camry is definitely among the best in class in terms of a hushed cabin.

The LE, with its 4-cylinder engine, 16-inch steel wheels with wheelcovers, and cloth interior, is the least glamorous Camry, but it still delivers smooth, adequate (if sometimes labored) acceleration and an exceptionally calm, absorbent ride. Naturally, the XSE V6 is the most dynamically engaging Camry (yes, I just strung those three words together). In terms of cornering ability and sporty driving demeanor, the XSE feels like it can hang with most any mainstream midsize sedan. The trade-off for the XSE’s crisper moves are a stiffer ride and noticeably more road noise from its standard 18-inch tires. We found neither objectionable on the smooth-surface roads of our preview test-drive routes, but it might be a different story over potholed pavement. The XSE interior is also convincingly sporty and upscale; SE and XSE front seats offer a bit more side bolstering than other Camrys, but they are still all-day comfortable.

2014 Volkswagen Passat: A Week in a Sophisticated Segment-Busting Sedan

A Toyota Camry is a default choice for the majority of midsize car shoppers, and that trend doesn’t show many signs of slowing. However, the substantial updates to the 2015 model show that Toyota isn’t taking its competition lightly. The improvements should certainly burnish the Camry’s appeal to mainstream mid-size sedan buyers who walk an oft-beaten path, but the new XSE model might also pique the interest of open-minded enthusiast shoppers who realize that the perception of the Camry as a no-excitement beige-mobile is about a decade out of date.