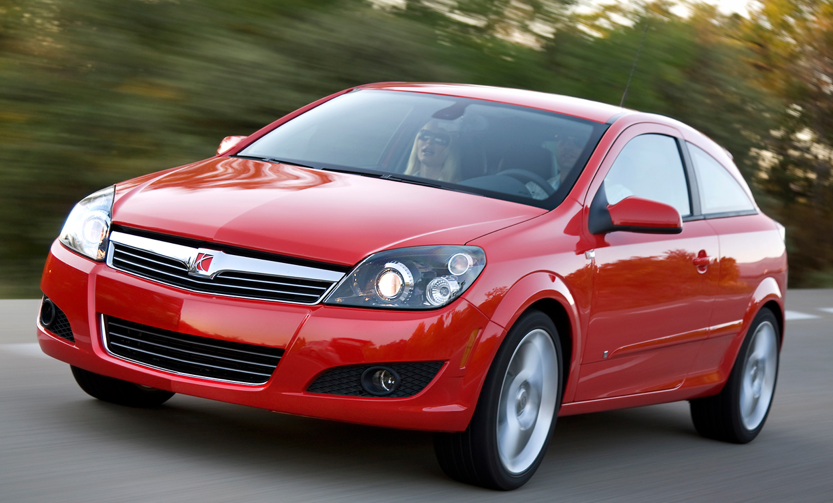 Too little, too late? Imported from Europe, the Astra was meant to help lift the Saturn brand upmarket.

By now, you know the story. In a post-apocalyptic haze, driven by Wall Street pundits, the UAW, and the federal government, General Motors killed three brands in one fell swoop. Just like that, Hummer, Pontiac, and Saab were transformed from viable sales channels to discount retailers, peddling their remaining inventory in limited variations and at steep discounts.

In truth, Saturn didn’t go down without a fight. No less a business visionary than Roger Penske made gestures towards buying the brand outright, but ultimately couldn’t make the numbers work. 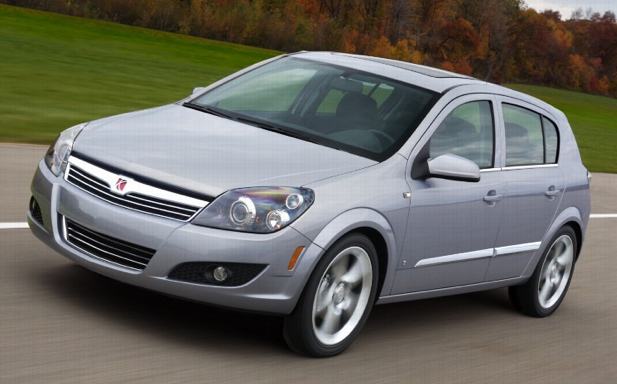 The 4-door Astra could be had in base XE and sporty XR trim levels. An XR is shown here.

Saturn’s death may have been a mercy killing of sorts. By 2009, all of the goodwill that the brand had developed in its early days had vanished. Gone were the dent-proof plastic body panels, the feel-good no-haggle prices, and the simple, low-frills compact cars.

Instead, Saturn was by then selling rebadged versions of the cars every other GM division was peddling, and not doing an especially good job of it. There was one exception, however.

Imported for 2008, and just for 2008 as it turned out, was Astra. An Opel in Europe, the Astra was sold stateside almost unchanged for U.S. sale, including the name.

Despite a lack of power, and European-spec audio controls complete with a baffling 24-hour digital clock, the Astra exuded a charm and sense of quality that eluded the similarly sized Ion that Saturn was also selling at the time.

All told, just over 18,000 Astra were sold, about a third of which were sold in 2009 as 2008 models. Analysts at the time attributed the Astra’s weak sales to poor launch timing. As fate would have it, the first Astras rolled intro Saturn dealerships just as GM was slapping huge rebates on the Ion, make the latter vehicle look like a bargain by comparison. 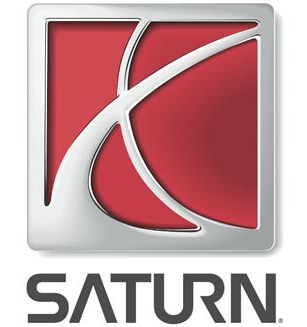 The Astra was available stateside only in hatchback guise, and only with a 138-horsepower 1.8-liter 4-cylinder engine. Four-door models were available in base XE and sporty XR trim levels, while the 2-door could only be had in XR trim.

With a sport suspension and good-looking 17-inch wheels, the XR was the Astra to have. When equipped with leather upholstery, sunroof, premium audio, automatic transmission, and available 18-inch wheels, the Astra topped out at $23,555, not a huge amount by 2008 standards, but arguably too much for a small Saturn.

One has to wonder if, had Saturn had survived, the brand might have eventually imported a more potent Astra variant, one that might have competed directly with the Volkswagen Golf GTI. Might have been cool.

Why yes, that is a Saturn taxi

The 2008 Saturn Astra replaces Ion as this GM division’s new entry-level car. XE and top-line XR trim levels are available for 4-door models, only XR for the 2-door. Both use a 138-hp 1.8-liter 4-cylinder engine and a 5-speed manual transmission or optional 4-speed automatic. Available safety features include ABS, traction control, antiskid system, curtain side airbags, and front side airbags. Among Astra’s standard features are OnStar assistance, cruise control, tilt and telescopic steering wheel, heated power mirrors, and rain-sensing wipers. Available for 4-door models is a 2-panel sunroof that Saturn claims is the largest in the class. The 2008 Saturn Astra shares its basic design with the Opel Astra built by General Motors’ European division. Note that the Astra has conventional steel body panels, not the dent-resistant plastic panels that were once a Saturn hallmark. 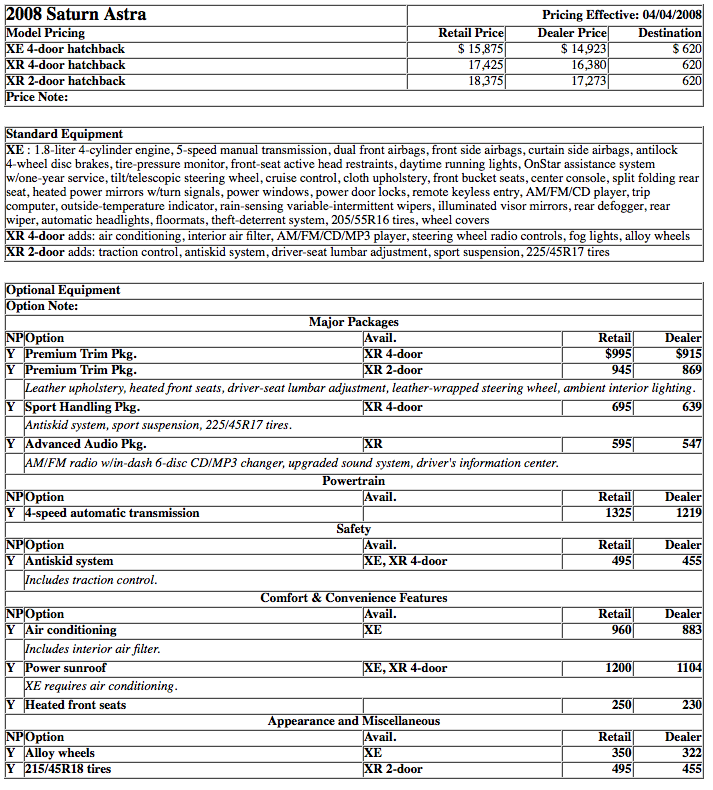 Simple pricing may have been the Astra’s single link to Saturn’s original retail plan.