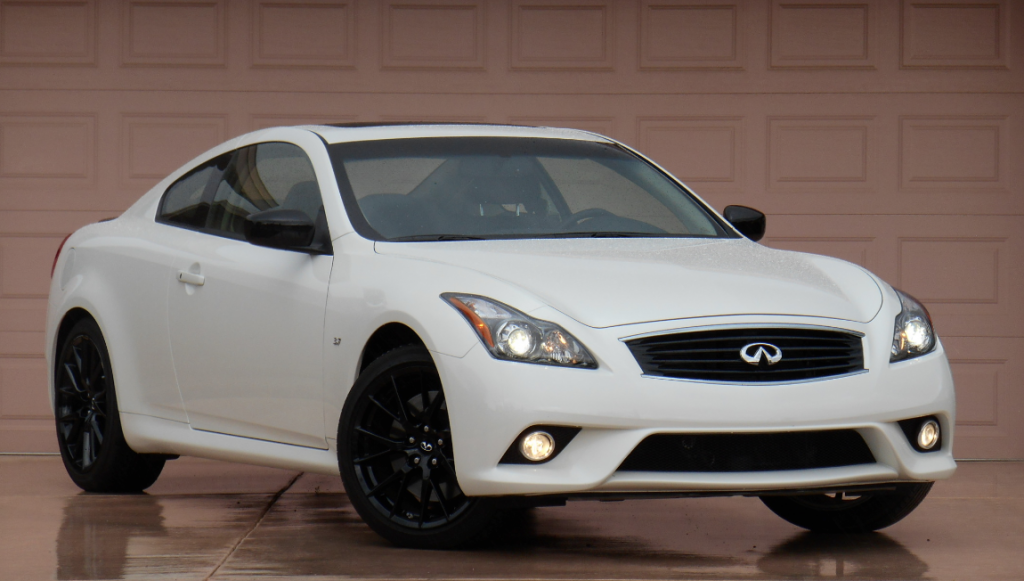 Our Q60’s 19-inch wheels weren’t dirty; they came painted black. Chalk it up as part of the “S” model that also adds sport suspension, sport muffler, and other “sporting” touches. In rear-drive form with a few minor options, our test car came to $49,575.

The Good: Handling, interior look and feel, visibility (for a coupe)

The not so good: Rear-passenger room, trunk space, clutch feel

Back in the 1970s, coupes were king. When the Oldsmobile Cutlass became the most-popular model in the land in 1976 with more than half a million units sold (My, how the mighty have fallen), 77 percent were two-doors. Even full-size family cars such as the Chevrolet Impala saw a high percentage of volume going to 2-door body styles.

That’s not the case any more. Coupes are now reserved for sporting machinery, and even that group has been widely infiltrated by sedans. It seems the racier appeal of the two-door has been overruled by its impracticality.

Yet a revived ponycar market – which includes the Chevrolet Camaro, Dodge Challenger, and Ford Mustang – has shown some sales strength of late, and many of the luxury-performance makes still offer a coupe, though they tend to sell in low volume. Audi makes the A5, BMW the 4-Series (nee 3-Series Coupe) and 228, Cadillac has two-door versions of both the ATS and CTS, Lexus just brought out the new RC, and Infiniti soldiers on with the now 7-year-old Q60, which was originally called the G37 Coupe. 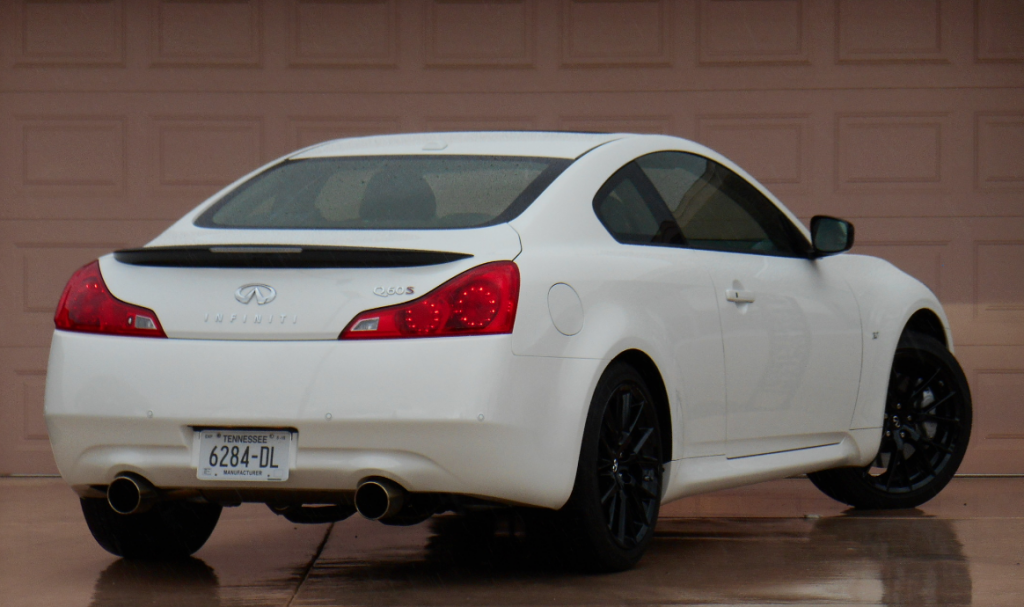 Against its rivals, the Q60 is a little behind the times, but in some ways, I found that refreshing. The dashboard boasts clean lines and easy-to-use controls, while many cars (even some other Infinitis) have gone to more complicated designs and interfaces. Furthermore, visibility is surprisingly good thanks to thin roof pillars, something else many rivals seem to have cast aside as “old fashioned.”

That’s not to say the Q60 is a model of practicality. But it’s also important to note that sleek styling – which is largely the appeal of these “Grand Touring” luxury-performance coupes – often necessitates some sacrifices.

One is to trunk space. While there’s sufficient capacity for a weekend trip (and, Infiniti says, two sets of golf clubs), the area below the trunklid isn’t very tall. And though the rear seat back folds nearly flat and level with the cargo floor (it’s one piece, not split), the pass-through is low and rather narrow.

Another is to interior room. More so than some rivals, the Q60 is what’s called a “2+2” – meaning that seating is really intended for two adults in front and two kids in back. Especially with the sunroof fitted to our test vehicle, really tall drivers might find headroom lacking, though legroom should be fine. But the rear seat can only accommodate folks up to about 5’6 before their heads hit the ceiling, and even they won’t have sufficient legroom if the front seats are far back. Furthermore, getting to the rear seat can be a challenge even for those who fit, as the front seats power forward slowly and the portal revealed isn’t very tall. 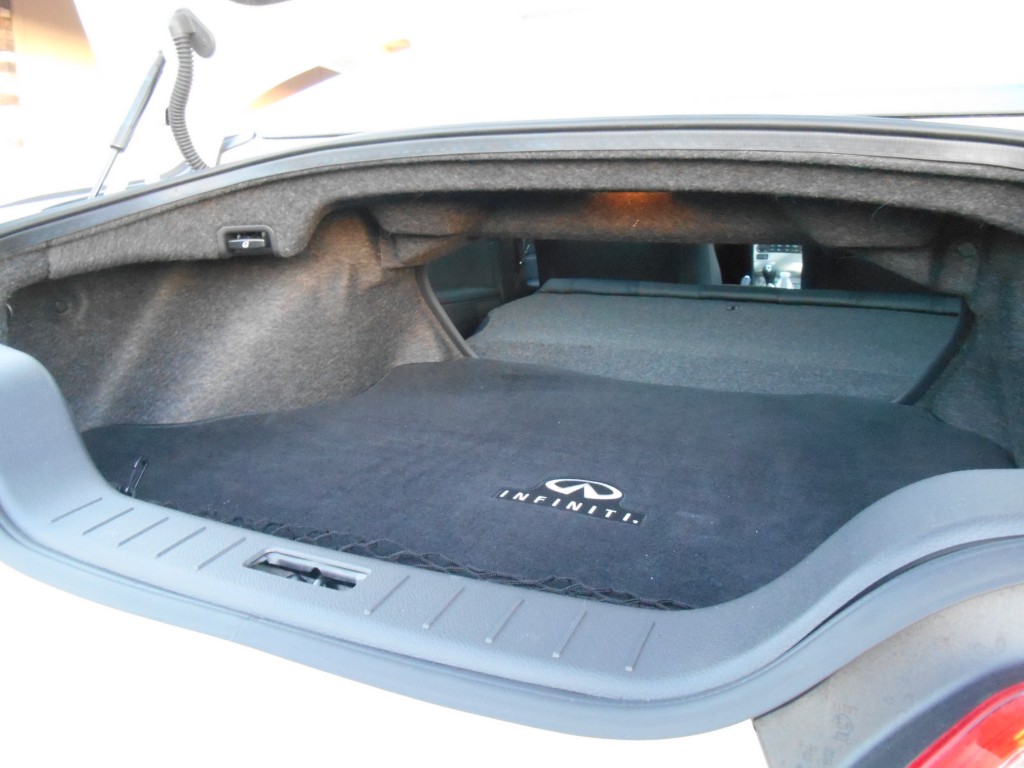 The trunk is wide but not very deep, so tall items won’t fit. While the rear seat back (not split) folds nearly flat and level with the cargo floor, the opening it reveals is quite restricted. Still, there’s room for a good amount of luggage or two sets of golf clubs.

Entry and exit can also be challenging for the front seaters. The long doors have to be opened quite wide to have room to slip your legs in (not always doable in a tight parking space), and the low-set seat and low roofline mean there’s quite a drop down to get in and an even tougher climb up to get out.

Interior storage is sparse, but adequate. Besides the expected glovebox and door map pockets, there’s a small covered bin at the forward end of the console along with two cupholders in the center that are concealed beneath a sliding cover.

Gauges are large and move up and down with the tilt steering wheel, meaning they’re usually not blocked by whatever wheel position you choose. Some controls are set on a vertical panel, others on a horizontal one, with a dash screen on top. All controls are fairly easy to reach and use, with climate, audio, navigation, and phone functions nicely separated – something that can’t be said of some newer designs. Most surfaces are nicely padded, with the rather dark ambiance being brightened some by numerous aluminum trim pieces and racy-looking aluminum pedals. Overall, the look is more stately, subdued, and purposeful than in most other cars of this class, something I put in the Q60’s “plus” column. 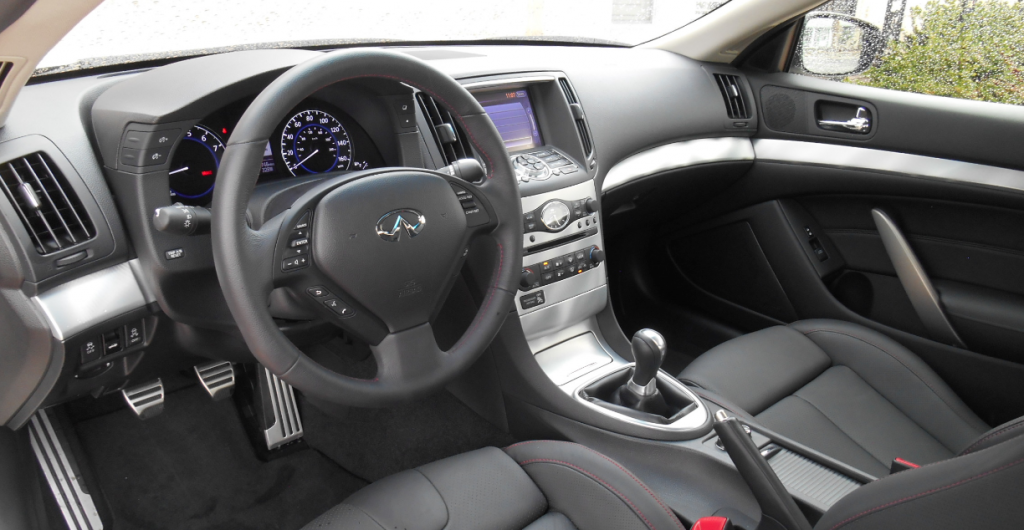 Q60’s interior is a combination of stately and sporty. There’s good adult room in front, but — as in most coupes — the long doors (which can’t be opened wide enough in tight quarters) and low seating position can make getting in and out a chore. The rear seat is best left to kids or packages.

Also in the plus column is the powertrain – or at least, most of it. The 330-horsepower 3.7-liter V6 provides a strong, smooth urge throughout the rev range, and produces a muted, throaty sound while doing it. But the manual transmission fitted to our test car wasn’t as impressive. The short-throw shifter was very precise if a bit notchy, but the clutch feel could have been better. It seemed to have an “over center” feel that increased the return-spring pressure right at the point of clutch take-up, making it difficult to modulate the clutch for smooth take-offs and even for jerk-free shifts. However, the other transmission choice is a 7-speed automatic, which most buyers would choose anyway. Although our test car was rear-wheel drive, an all-wheel-drive version is also offered, as is a convertible body style (though only in rear-drive form).

Not that it matters a bunch in a car like this, but fuel economy wasn’t great: I averaged just 16.2 mpg, though that was in about 75-percent city driving. That’s not much below the EPA rating of 17 city/25 highway, so from a mileage standpoint, this is a car better suited to freeway runs than city slogging. 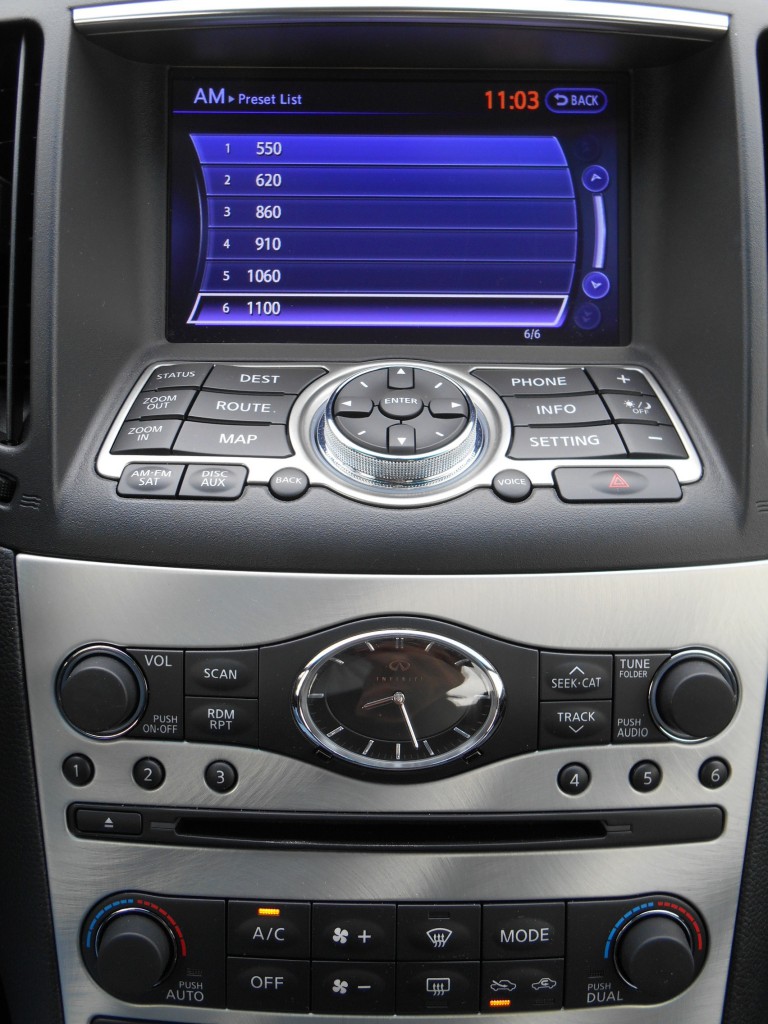 All the buttons and knobs may seem “old school” in this day and age, but they make for quick and easy adjustments.

Cushy ride comfort and optimal handling prowess are usually mandatory trade-offs, and the Q60 leans toward the latter. Steering feel is meaty and precise, with little body lean in turns. But few bumps pass unnoticed, though some are heard more than felt. Much of that is due to the summer performance tires fitted, which are 225/45R19s in front, 245/40R19s in back – so quite low-profile. Note that these tires shouldn’t be used in cold temperatures, as the rubber compound “freezes” and becomes slick.

The Q60 is based on the equally long-running Q40 sedan (which also formerly carried the “G37” designation), but that’s really a carryover model that’s effectively been replaced by the new Q50 sedan introduced for 2014. How long it’s going to be before the Q60 moves to that platform – or if it even will – isn’t known. But for now, the Q60 stands as a mid-priced coupe in the classic Gran Turismo mold, a combination that doesn’t appear to be going out of style.