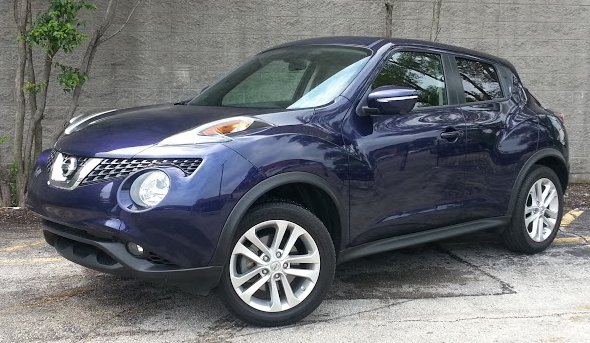 Nissan’s Juke is tough to categorize but easy to like. Our test vehicle came in high-level SL trim with AWD and carried a $28,225 sticker.

The not so good: Interior materials, passenger room

If any vehicle on sale today lives up to its name, it just might be the Nissan Juke. You think you’ve got your finger on what it truly is, then maybe you don’t. It’s small enough to be a subcompact car—but there’s the available all-wheel-drive, slightly elevated ride height, and quirky shape. OK, so maybe it’s a tiny crossover sport-utility—except the front-wheel-drive jobs certainly couldn’t qualify as SUVs and the tiny footprint almost screams “city car!” Head-fake left; jab-step right—you’ve just been juked. Or is that Juked? 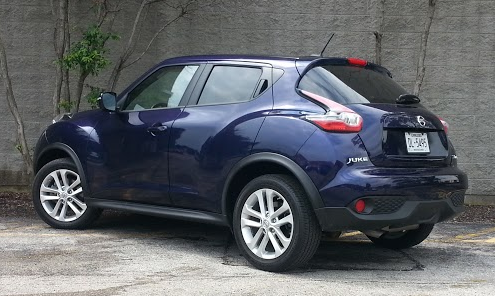 At 162.4 inches stem-to-stern, the Juke is among the most compact of AWD vehicles, making it perfectly suited to inner-city parking in the snowbelt states.

The little engine does all right for itself when it comes to getting the Juke around. It takes a good stab of the throttle to merge into expressway traffic, but once there it keeps up well—though Nissan recommends premium-grade fuel for best performance. This driver picked up on some slight moments of turbo lag—nothing too bad—but a little harder to hide is that the engine groans when pushed, and in straight drive mode, the CVT enables that. Note that by selecting “Sport” mode on the standard I-CON “integrated-control” system, drivers can selectively “shift” the CVT. With the test vehicle running on all-wheel drive in “Normal” transmission mode, this driver averaged 26.51 mpg during a 159.3-mile run, 61 percent of that in city conditions. EPA estimates for the Juke that CG tested are 26 mpg in the city, 31 mpg on the highway, and 28 combined.

Ride is “busy” most of the time, with a lot of small motions making themselves felt, and when crossing clear-cut surface imperfections, the Juke is pretty jumpy. Steering and handling are nice, though, and maneuverability in tight spaces is good. 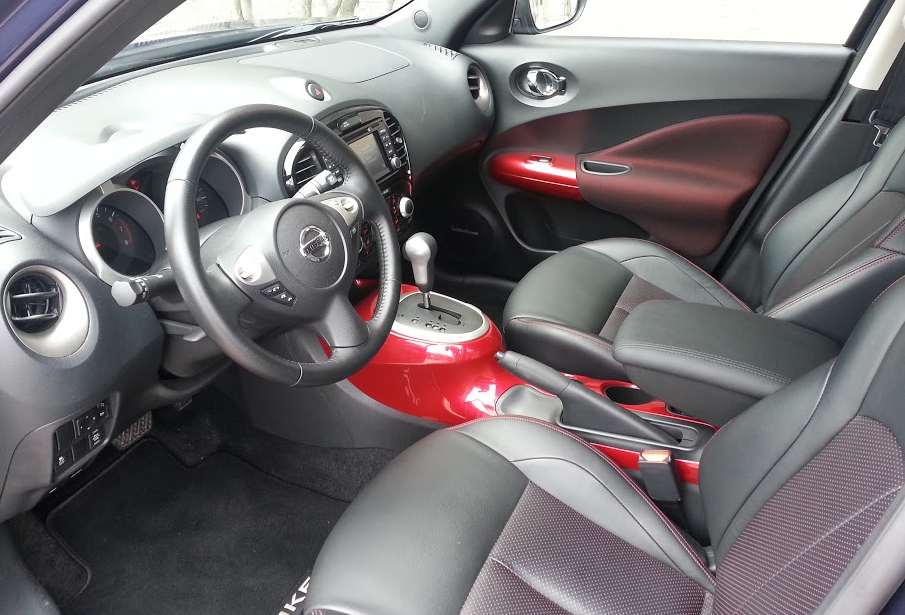 Hard-plastic surfaces dominate Juke’s interior, but some are colored to add a bit of pizzazz. Our SL tester included heated leather front seats.

The control layout starts with a small, recessed vehicle-information readout wedged between the large main control dials. Audio is easy to program and access on the central screen, with helpful thumb controls on the steering wheel also. Climate controls sited below the screen combine dials (for temperature and fan speed) with many function buttons. The climate controls actually share space with the I-CON system interface. By pressing a “D-Mode” button above the unit, buttons that displayed things like air-flow selection switch to being selectors for driving modes and other performance settings.

Front storage space starts with a glove box that’s somewhat narrow but fairly deep. There are small door pockets with bottle holders, a small niche under the dash on which to rest smart phone next to a fixture that contains a USB input and auxiliary jack. The test car came equipped with an optional pivoting center arm rest that opens for storage. However, the arm rest has to be flipped up between the seats in order to use the 2 open cup holders in console. Rear storage consists of bottle holders in the doors and a pouch on the back of the front passenger seat.

For a small vehicle, floor space in the Juke’s cargo area isn’t half bad, though the racy slope of the rear hatch will slightly cut into vertical storage capability. The spare tire is right under the floor in AWD models, with only a couple of small spaces for storage of incidentals available around the tire. The cargo compartment loads at bumper height with no lip to negotiate, and if the head rests on the 60/40-split rear seats are removed, the seats will fold completely flat to open up lots more cargo room. 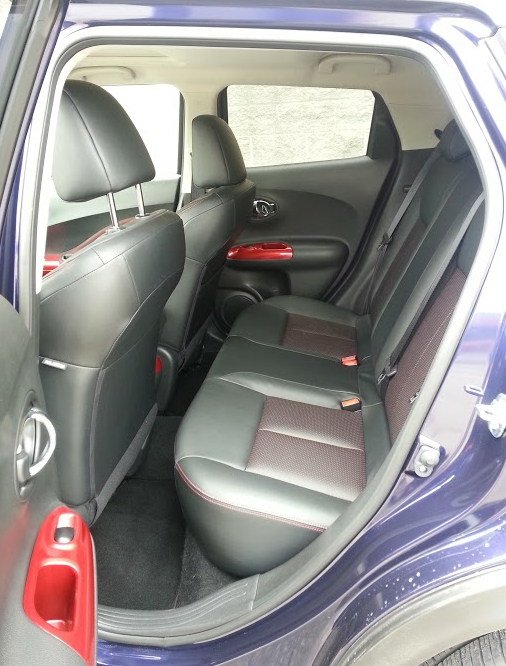 Juke can accommodate even tall folks up front, but that will virtually erase the already-meager legroom in back.

Head room and leg room in front are pretty good, even with a standard sunroof overhead. The rear seat holds 2 adults—if front passengers don’t need to stretch back too far. Otherwise, already-limited leg room vanishes. The headliner is shaped to preserve as much rear head room as possible, but it’s not as plentiful as in front. The drooping roof and thick rear pillars compromise over-the-shoulder visibility.

Even at the SL level, ambiance is a mix of stylish and frugal. The somewhat hard-backed leather seats were detailed with red stitching that harmonized with red-flecked cloth on the door arm rests and glossy bright-red accent panels on the console and door grips, but the rest of the door panels and the dash were awash in featureless, black hard plastic.

The AWD Juke SL that came CG’s way started at $26,940. With a couple of options that totaled $460, the full delivered price came to $28,225. Lower-line Jukes that incorporate some of the same key standard features might be better values as economy cars, but there are roomier, quieter alternatives that can be had for SL money.

Ultimately, then, exactly what type of vehicle is the Nissan Juke? Tiny SUV? All-wheel-drive subcompact hatchback? For the record, CG currently has it in its sporty/performance class.

See what we mean?

Although — as John mentioned — CG currently slots the Juke into the sporty/performance class, it will most likely be  shopped against the rapidly expanding crop of subcompact SUVs that include such vehicles as the new Chevrolet Trax, Fiat 500X, Honda HR-V, and Jeep Renegade. In that field, the Juke makes its mark as being among the shortest and sportiest entries, its only real rival in those areas being the more expensive Mini Cooper Countryman. While “shortest” might appeal to city dwellers wanting a high-riding all-wheel-drive vehicle that’s easy to parallel park on urban streets, it’s the “sportiest” part that really held an attraction for me.

Most subcompact SUVs sacrifice power to fuel economy. While that’s noble — and in this day and age, probably necessary — it really saps some of the joy out of the driving experience. Juke puts it back in. While small-displacement turbocharged engines and CVT transmissions aren’t usually ingredients for a sporting recipe — particularly when it comes to off-the-line spurts — the Juke’s spunky 1.6-liter turbo and CVT combine for a surprisingly decent full-throttle launch from a stop (my times averaged a quick 7.3 seconds 0-60) and fine passing power, the latter thanks in part to relatively quick “kickdown” shifts. And while CVTs have earned a reputation for “rubberbanding” that drives some people nuts, the Juke’s has “steps” built in that sort of simulate gear shifts.

Even better, the power didn’t really come at the expense of fuel economy. Most other subcompact sport utes earn better EPA figures, but in 263 miles that included about 20 percent stop-and-go slogging and several 0-60 runs — both mileage killers — with the other 80 percent in highway driving, I averaged an impressive 31.02 mpg, which (barely) topped even the EPA highway estimate of 31 mpg. Nissan recommends premium-grade fuel “For maximum performance,” but that means you can get by on regular.

Your Mileage May Vary, Here’s Why 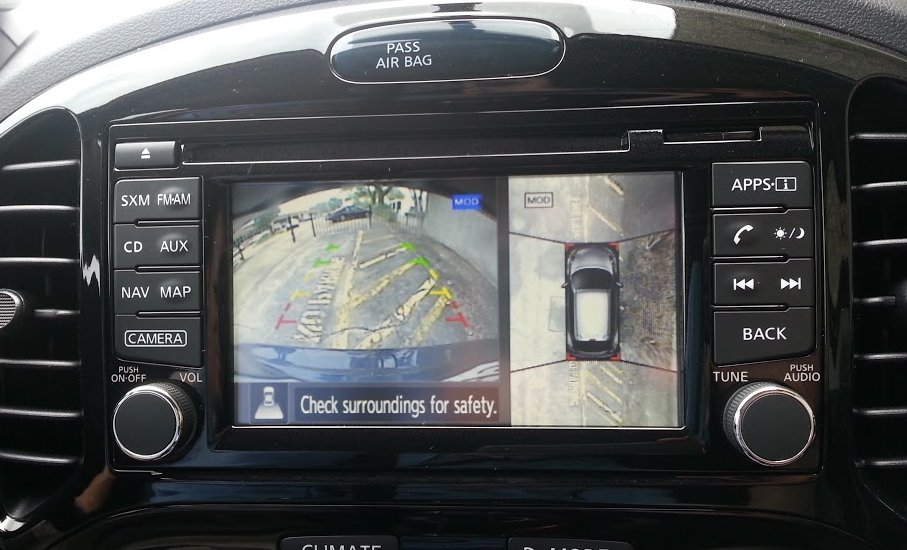 The rearview camera makes do with a small screen, but our SL’s 360-degree camera is a great help when parking (it can also show a right-side view of the curb) and is a rare  feature at this price level.

Yes, it’s rather stiff riding, but that’s an acceptable (and necessary) trade-off for the sporty handling. And though the interior is indeed low-rent (save for our test car’s bright-red console and door trim), it’s also a study in simplicity and convenience. And I really like the 360-degree camera that can be set to show the right-side curb to avoid scrubbing your wheels, the only negative being that the rearview camera’s screen is quite small (only about 4 inches diagonal). Downsides are that passenger room is barely adequate for four average-size adults (5’9 in tandem is about the max, though the really tall can fit in front but with no legroom remaining in back), and visibility is hindered to the front corners and particularly to the sides and rear corners by thick roof pillars.

Cargo space is also limited. In the cozy cabin, there’s no more than minimal storage, and in back, the sloped roofline and angled backlight conspire to limit the size of what will fit through the opening and under the ceiling.

Compared to most of its direct competitors, Juke is old. It was introduced for 2011 and has seen little in the way of updates since, though it has all the basic infotainment and safety equipment newer vehicles have. And while our $28,000 tester was an upscale SL, which includes such items as a sunroof, a base S with AWD and the same potent powertrain lists for less than $23,000 including destination. That makes it a great choice for those who want some performance with their compactness, something nothing else in the class offers at this price. 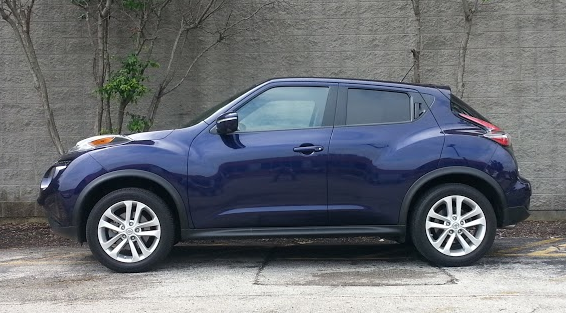 Juke’s sloping roofline and angled rear window cut a bit into cargo space, but give it — along with the “hidden”rear door handles (found at the leading edge of the rear roof pillars) — a sporting “fastback coupe” profile.

BTW, this might be the only report on the Juke that doesn’t include the word “funky” to describe its … uh … unique appearance. And yes, it was an effort.