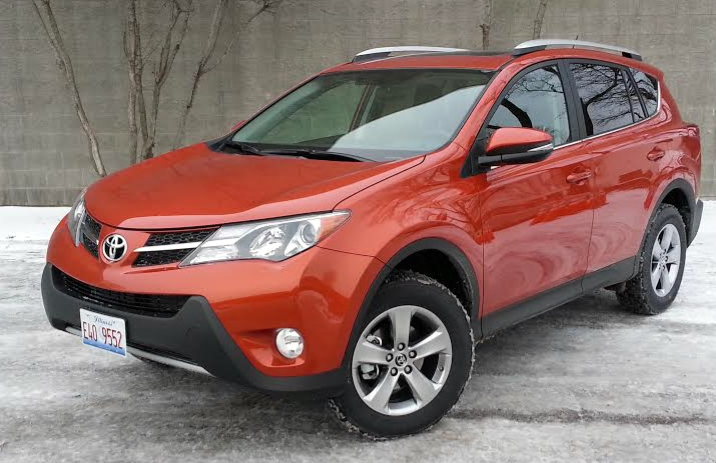 The great: Competent handling, roomier than it looks

The not so good: Less-than-classy cabin

Check out the entire Toyota lineup

There’s a lot of talk these days about the crossover-style sport-utility vehicle becoming America’s mass-market passenger car of the future, displacing the good old sedan after, oh, only about 90 years of dominance. If that happens, the Toyota RAV4 can take a fair share of the credit (or blame), having been a pioneer in the field on these shores almost 20 years ago. 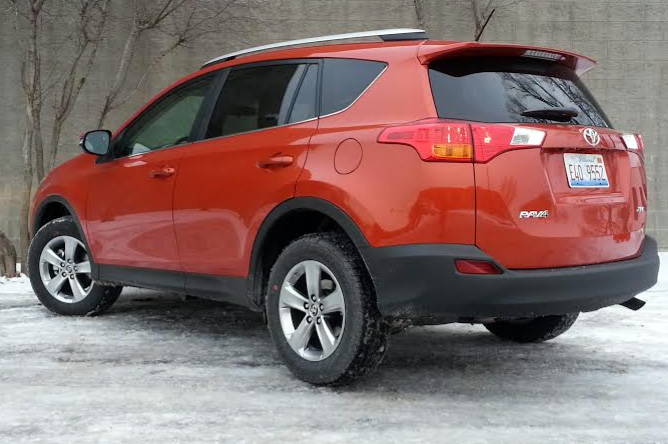 Like sedans, crossover SUVs come in a variety of sizes and levels of luxury. The 2015 RAV4 is a sturdy, straightforward, but not especially dynamic member of the compact class. It offers a useful amount of room for people and/or cargo, many of the technology features that modern drivers expect, and a livable price. However, it goes between Point A and Point B without much to stir the driving soul. 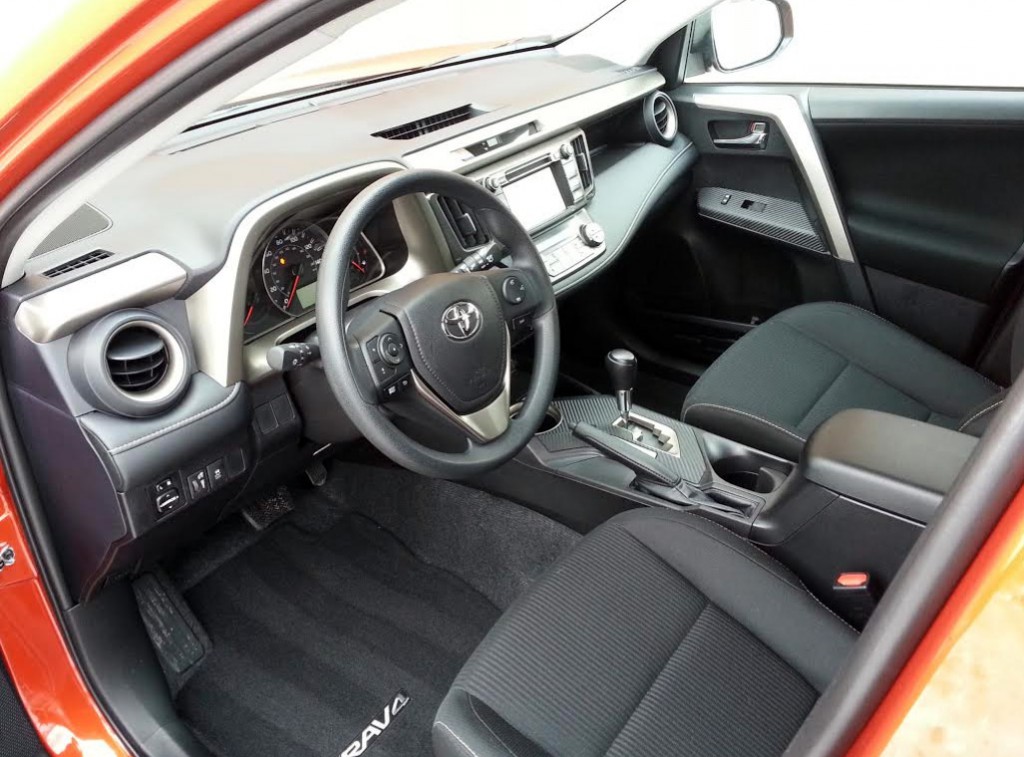 In XLE trim, RAV4’s interior is tidy and functional, if something short of upscale.

What’s good about the RAV4 from a “family car” standpoint starts with front seats that are supportive and height adjustable—manually in the XLE. In conjunction with the tilt and telescoping steering column, drivers can find that “just right” spot. This driver had all the leg room he needed and was not crowded under the moonroof. Rear seats will hold 3 kids or 2 adults with adequate leg and head room. Entry/exit is easy, and all-around visibility isn’t bad at all.

Controls are generally easy to read and easy to reach. One exception is the driver-info display in the instrument cluster. At night, with the lights on, it has a glowing blue background on which darker numerals appear, but the contrast isn’t super sharp and the numerals can be hard to read. Climate controls consist of buttons to select function, with handy rotating dials to choose temperature. Audio presets are easy to set and access.

Materials, however, aren’t so plush in the XLE, with fabric seats and a urethane steering wheel. Soft-touch surfaces are confined to a band through the middle of the dash, tops of the arm rests, and the lid of the console box. Except for some flashes of satin-silver plastic trim on the dash, doors, and steering wheel, a blackish shade of black was the color of the interior.

Storage space for incidentals in front consists of a decently sized glove box, a so-so cubby under the console arm rest, 2 open cup holders on the console, and small door pockets. Second-row storage is handled by pouches on the backs of the front seats, very small bottle-holder door pockets, and 2 cup holders molded into the pull-down center arm rest. The rear cargo area is not expansive, but the floor is flat, liftover is conveniently low, and built-in tie-down hooks are provided to help secure loads. Fortunately, the rear 60/40-split seats fold very nearly flat, and with a cover panel that spans the gap between load floor and seat for substantial gains in useful cargo room. 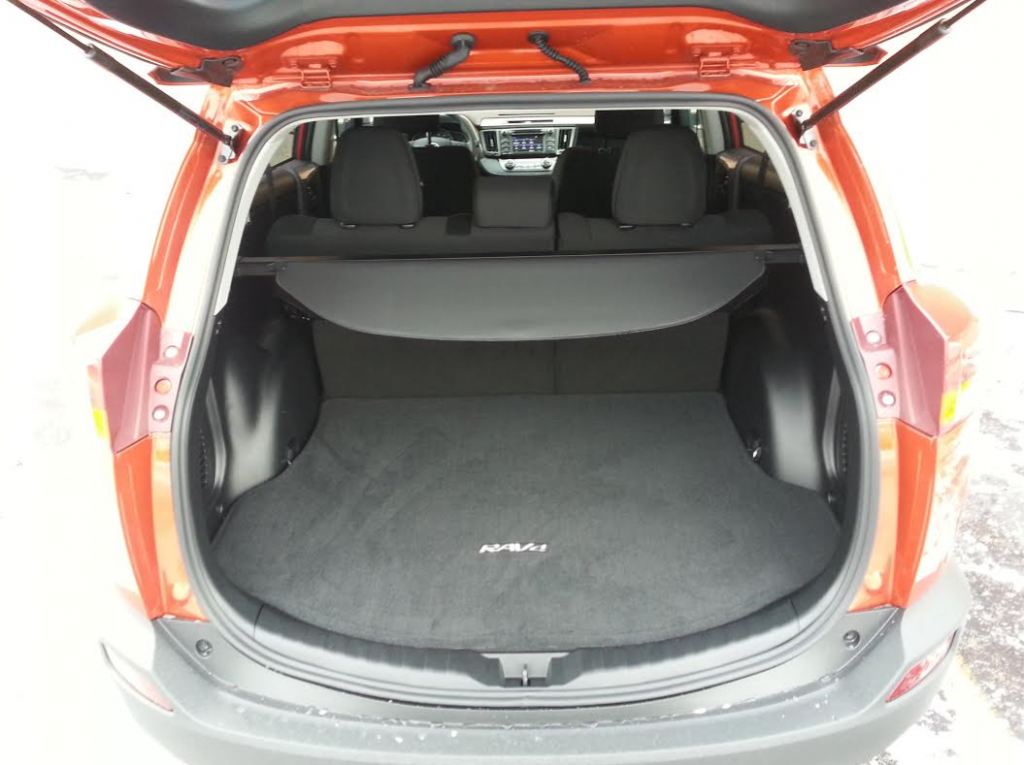 That brings us at last to on-road performance. Ride is pertly firm and acceptably damped. Handling is easy, yes, but somewhat bland; cornering lean is fairly well moderated. The dohc engine makes 176 horsepower, but has to spin up to 6000 rpm to hit that peak, and it groans a bit on the way up. Maximum torque is 172 pound-feet at 4100 rpm. Aside from the base drive calibrations, the RAV4 features “Eco” and “Sport” mode selections. There’s negligible added muscle from calling up Sport. Eco tones down the accelerator input and changes air-conditioning/climate-control parameters in the quest for greater fuel efficiency. Perhaps a steady diet of Eco in errand-running and daily stop-and-go commuting would add up to decent fuel economy, but mixing modes in this driver’s 107.4-miles test stint (with 61 percent city-type driving) toted up an underwhelming 20.07 mpg in a vehicle that has EPA-estimated ratings of 24 mpg city/31 highway.

The bottom line on CG’s RAV4 test car didn’t get too far out of sight, totaling $26,935 with delivery. That included optional carpeted mats for the floor and cargo hold, plus an Entune premium audio package that adds navigation, an app suite, and other infotainment features. There’s an entry-level LE model and a somewhat plusher Limited. The XLE probably offers the best bundling of standard features without going overboard, which is wise. There’s certainly nothing wrong with the RAV4 as a responsible family vehicle, but there’s nothing so right about it that it’s an object of desire.

Managing Editor Rick Cotta and I enjoyed the use of this RAV4 for our annual pilgrimage to Detroit for the North American International Auto Show. It is in long-distance highway travel where this competent compact crossover really shines. The RAV settles in nicely at highway speeds, is free of most wind and road noise, and boasts an especially compliant ride given its modest footprint.

A nice surprise was our fuel economy. We averaged almost 26 mpg, this including some time in rush-hour traffic at both ends of our journey. Also handy was the RAV’s low load floor, which allows for easy loading of larger and heavier items.