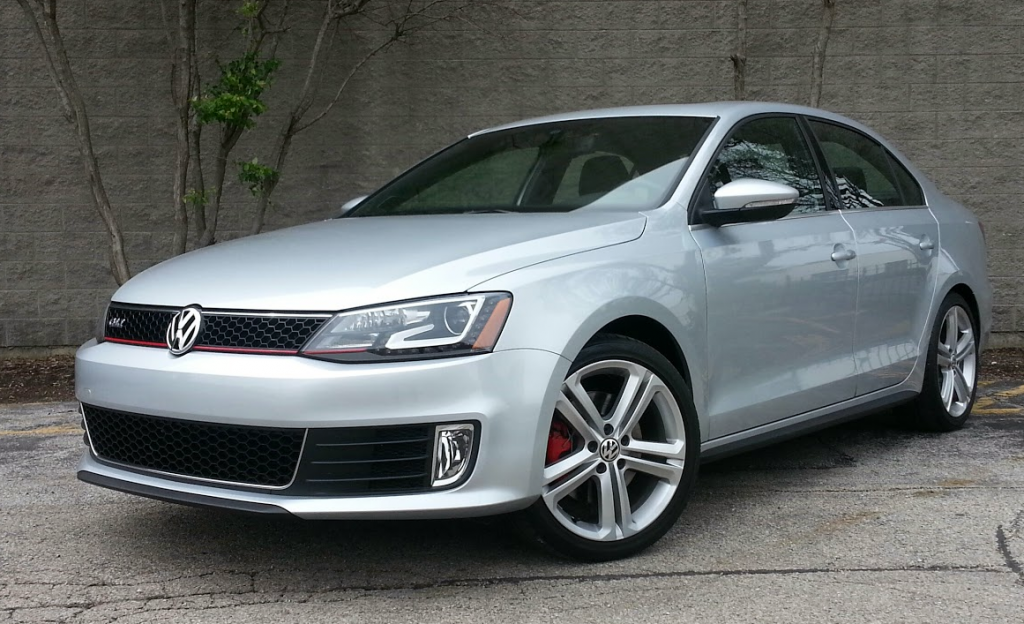 The great: Refined European performance for a value price

The good: Upscale cabin, good fuel economy given the power

The not so good: Limited in-cabin storage

The 2015 Volkswagen Jetta GLI has a driving character to match its sporting looks, which is good news. Even better news is that this doesn’t get in the way of it being a Jetta, which is a roomy and practical compact sedan. 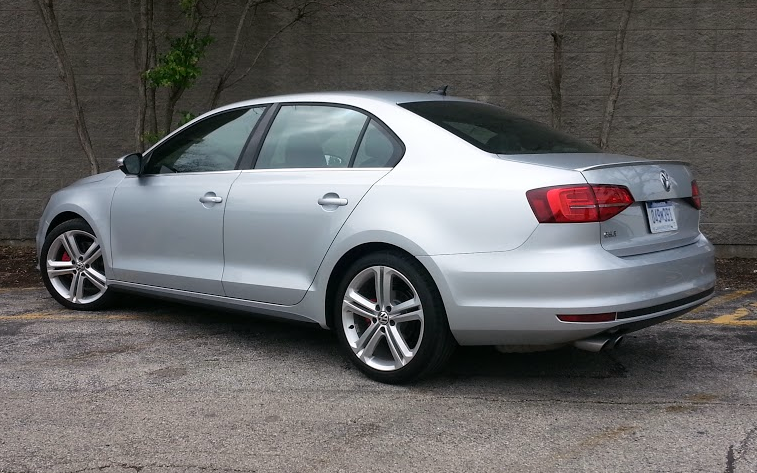 In general, the ’15 Jetta comes in for minor appearance updates inside and out, plus the availability of some new safety features. The athlete in the family, the GLI, sports a blacked-out honeycomb-pattern grille with red highlights, and its own lower fascia with corner-illuminating fog lights. A specific body kit, decklid spoiler, and distinct 18-inch alloy wheels are the other subtle cues to its status. Inside are well-bolstered leatherette sport seats with carbon-fiber-look accents. Red piping is found on the seats and instrument panel, and red stitching on the leather-wrapped brake handle and flat-bottomed steering wheel add further dash to an otherwise dark interior. (Bright trim is at a minimum in the GLI, though pedal faces are in brushed metal.) 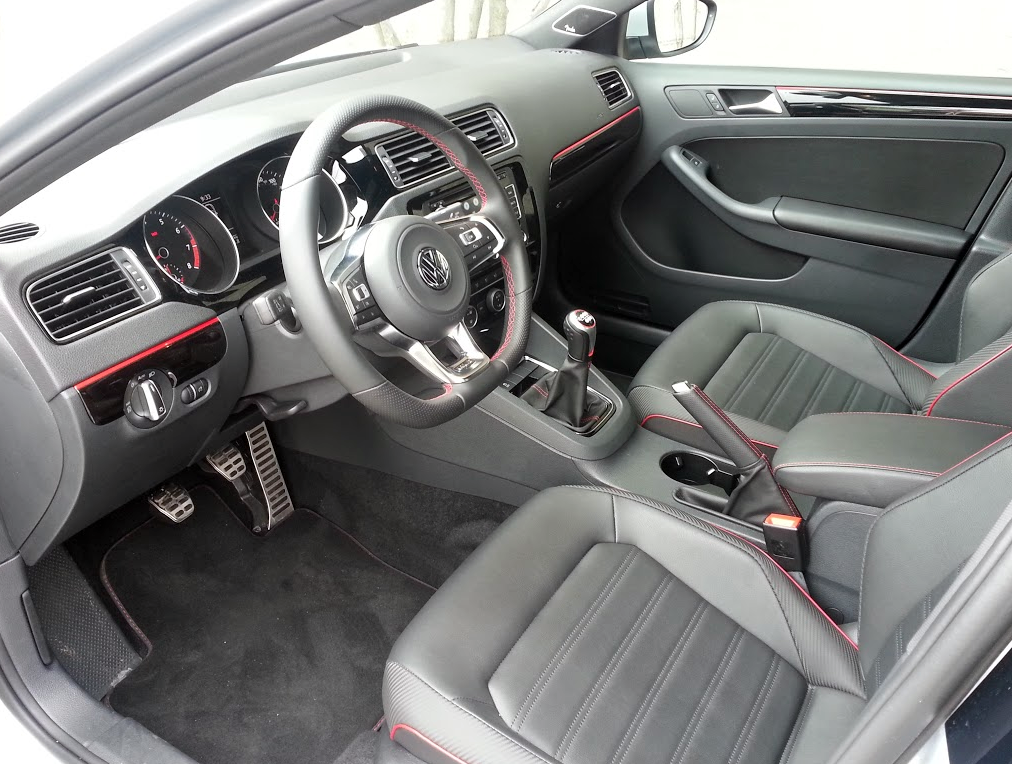 With its 2.0-liter turbocharged dohc 4-cylinder engine making 210 horsepower at 5300 rpm and 207 lb-ft of torque at 1700 rpm, the GLI isn’t the on-paper tiger of this class. Fortunately for this juiced Jetta, nobody drives on paper. While it doesn’t blast off the line (sort of a Jetta thing in our experience), the engine seems to feel stronger above 3000 rpm or so, and so the fun begins. The car that Consumer Guide® tested was equipped with the 6-speed manual transmission standard in GLIs. Clutch and shifter actions are pleasantly precise and cooperative for fun driving, even if it’s kind of a reach out to 5th and 6th gears. This driver’s time behind the wheel was relatively brief, covering 54.4 miles. With 31 percent of that in city-type driving, he averaged 29.17 miles per gallon of recommended premium fuel. If that kind of economy held up for a whole tank, it wouldn’t be bad—the EPA estimates for the GLI are 23 mpg in the city, 33 mpg on the highway, and 26 combined.

One of the GLI’s performance enhancements is the XDS “cross differential” that is designed to prevent the inside front wheel from spinning and surrendering some traction during fast cornering. There wasn’t much chance for that in this tester’s limited drive on city streets and urban expressways, but it was clear that the ride presented a nice balance of comfort and control. That said, as in other Jettas we’ve driven, the speed-sensitive electric power steering comes off as a little bland.

CG’s test car was a GLI with SEL trim at a starting price of $29,280. (An SE-level GLI is also available at $26,920 before delivery and options.) At its core, the GLI is as much a Jetta as any other, with a roomy-for-the-class back seat and trunk, fairly uncomplicated audio and climate controls, and strategically placed soft-touch surfaces (but no overabundance). For storage, there’s the same large glove box, 2 open cup holders in the console, small console box, and door pockets. One curiosity in the GLI: Instead of pouches on the backs of both front seats as in the diesel Jetta CG tested earlier, there’s only one on the back of the passenger seat. 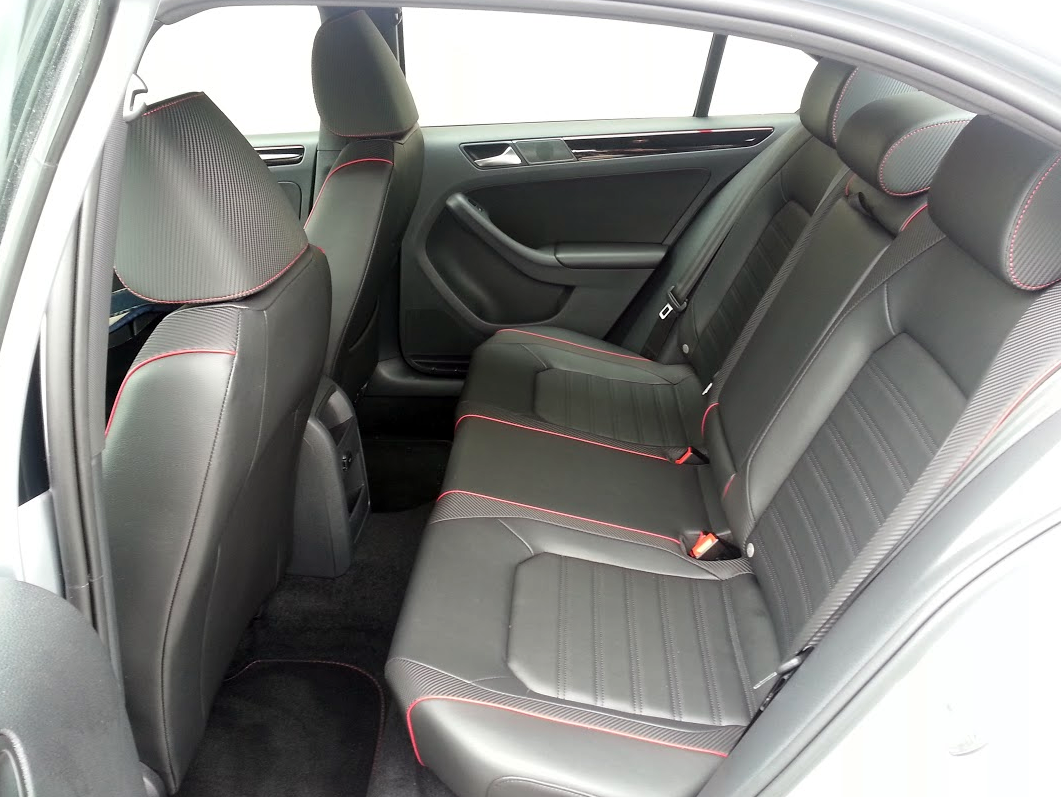 All Jettas boast rear-seat room that is among the best in the compact class.

The finished product is a balanced diet of everyday practicality with a tasty dessert of driving fun to sweeten the deal.

The Volkswagen Jetta GLI is a standout in the compact-car class for its concept alone. Other than its hatchback sibling, the VW Golf GTI, there is no compact car that attempts to blend zippy, agile performance with a sophisticated character the way the GLI does. Other compact-car performance variants—such as the Ford Focus ST hatchback, the Honda Civic Si coupe and sedan, and the Subaru WRX—might best the GLI in terms of by-the-numbers acceleration and handling, but none of them can match the VW’s everyday comfort and upscale feel. 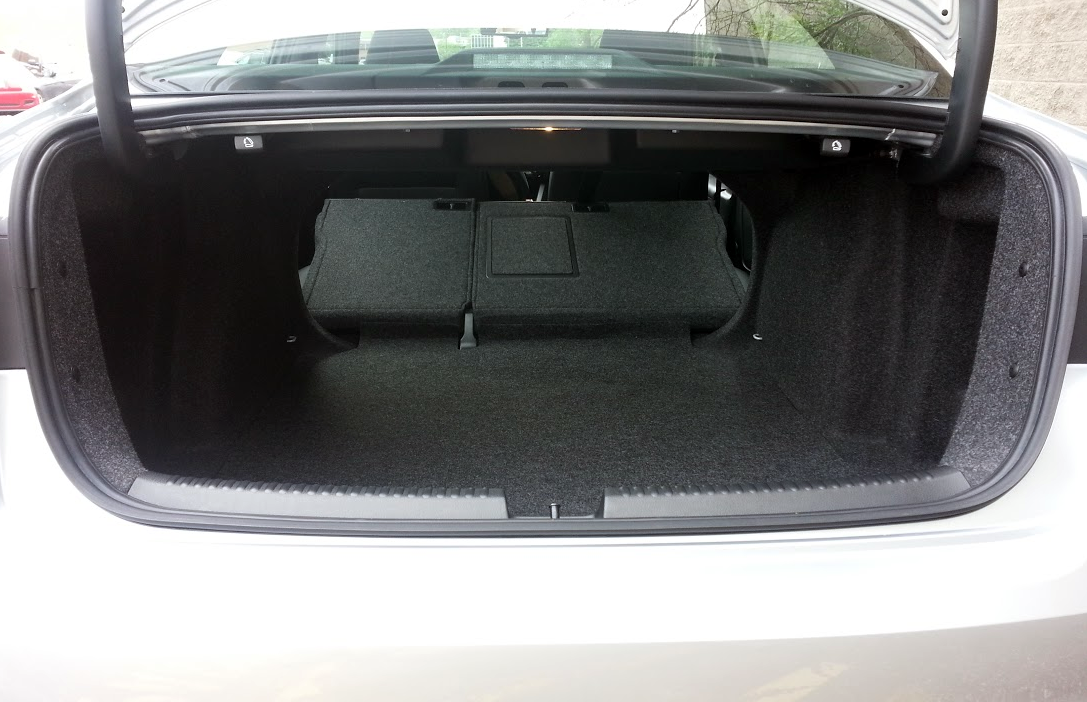 The GLI’s turbocharged 2.0-liter isn’t quite as gutsy as some competitive hopped-up fours. Its exhaust note isn’t as lusty either; it often seems more “whirry” than raspy. Still, it delivers invigorating acceleration as the revs rise, and the shifter in our manual-transmission tester felt wonderfully crisp and smooth. The low-profile 18-inch tires and sport suspension deliver sharp cornering moves, at a minimal—but noticeable—cost to ride quality.

The practical strong points of the basic Jetta platform carry over intact—chief among them are the spacious rear seat, generously sized trunk, and clear, straightforward control layout (the infotainment system’s touchscreen is on the small side, however).

The $30K sticker of our topline SEL test car might seem a bit steep for the class, but the near-luxury level trimmings inside and out justify the price point. The detailing of the interior is top-notch (the “carbon-fiber weave” upholstery pattern is especially nice), and the silver finish on our tester was exceptionally glossy and luminous. If you crave a mainstream compact sedan that delivers driving thrills without any boy-racer attitude, the Jetta GLI is hard to beat.