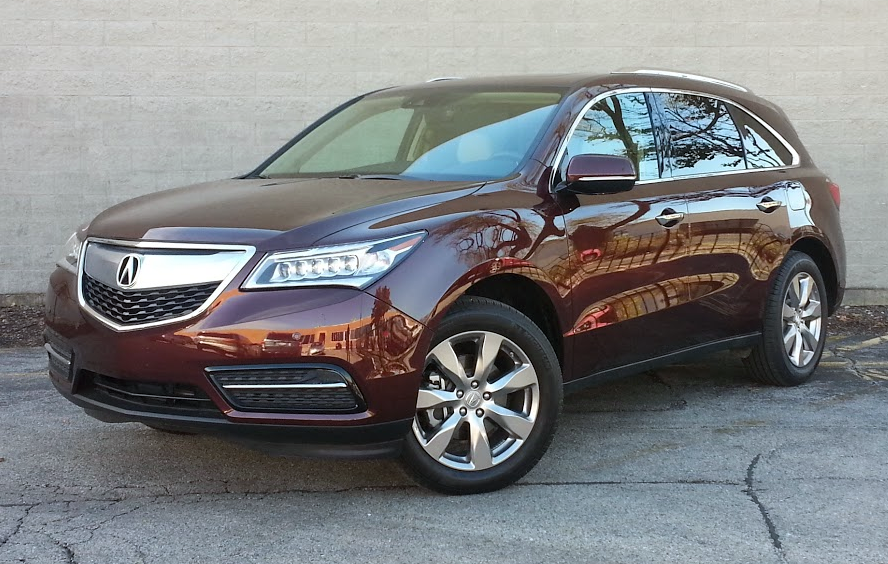 The not so good: Our observed fuel economy came in below EPA estimates

They won’t jump out at you at a quick glance, but the Acura MDX has a few new tricks up its sleeves for 2016. In the hunt for fuel-mileage increases wherever they can be had, there’s a 9-speed automatic transmission with a push-button gear selector, and an engine stop-start feature. Tweaks have been made to the all-wheel-drive system that Acura says improve handling response. An AcuraWatch Plus package extends availability of several important safety features throughout the lineup, there’s a frameless rearview mirror, and Apple iPhone users can take advantage of Siri Eyes Free functionality. 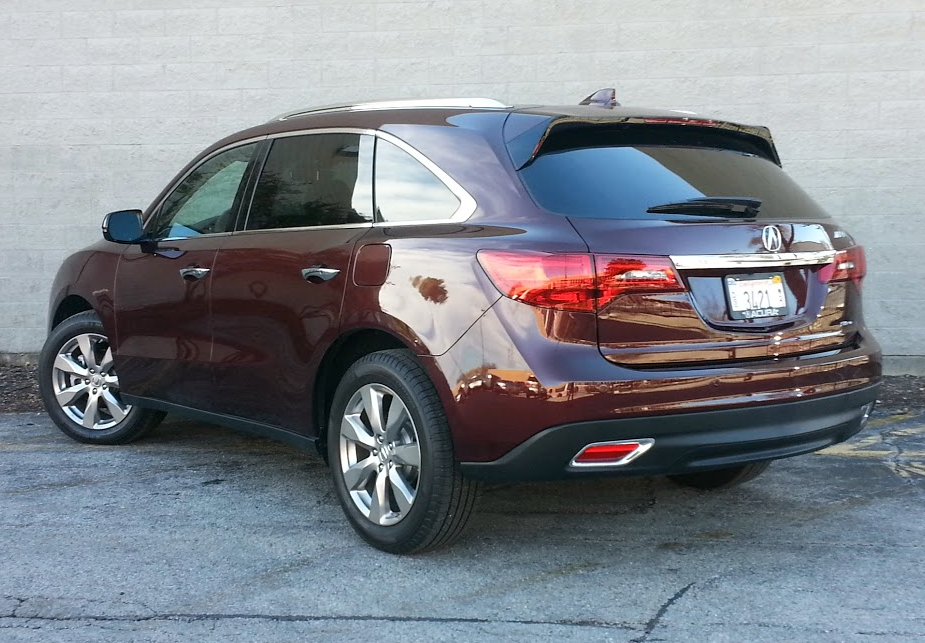 Though called packages, the Advance and Entertainment equipment groups are priced as a trim level. Just visible here are the roof rails that come as part of the Advance group.

What hasn’t changed is that the MDX is—again—a Consumer Guide® Best Buy in the premium-midsize SUV category for things like ride comfort, handling, tech features, and cabin refinement with the ability to carry up to seven passengers.

CG editors’ latest turn in an MDX came in a top-of-the-line Advance with Entertainment model, named for its melding of two feature packages. This built up the as-delivered sticker price to a considerable—and round—$58,000. However, with things like the powerteam, leather upholstery, heated power front seats, power liftgate, sunroof, rearview camera, keyless entry, push-button starting, and LED headlights standard all the way through the lineup—which starts at little less than $43,000 for a base front-wheel-drive job—the essence of the MDX can still be had for much less.

Premium leather seating comes by way of the Advance package, and further dresses up an already upscale cabin.

The new transmission, which replaces a 6-speed unit, shifts extremely smoothly, and is well matched with the quiet and capable 290-horsepower 3.5-liter V6 that has powered the MDX since the current generation of it came out for 2014. A full press of the brakes activates the engine-stop feature that’s included in the Advance Package; even letting up slightly on the pedal revives the engine with some commotion, though not as roughly as some vehicles with this feature. The auto start/stop raises EPA city mileage ratings by one mpg over MDXs without this feature. The loaded all-wheel-drive vehicle that CG sampled was projected at 19 mpg in the city and 26 on the highway, but that wasn’t close to this driver’s experience. He averaged just 17.67 mpg from a stint of 114.3 miles with 62 percent of that in city-type driving. Note that Acura recommends premium-grade gasoline for the MDX.

With the new transmission comes a new way to activate it—a row of buttons (and a flip-up lever for Reverse) placed on the center console. It’s not impossible to get used to fairly quickly, but it’s hard to imagine this being as easy to use without having to look at it as it was to grip a shift lever and just “know” by the number of clicks what range you were in. At least this method opens up some space on the console.

The test vehicle had separate central screens, one over the other. The top one displays things like the navigation-system map and trip computer. The lower one shows audio, climate, and phone information. Buttons and toggle switches beneath the lower touch screen activate functions of the automatic tri-zone heating and cooling system and set temperature, but other tasks are carried out on the screen, some none too easily. For instance, there’s an icon for the seat heater/cooler that doesn’t actually heat or cool the seat when tapped. Instead it opens up a display devoted to seat temperature, with further finger taps necessary to call up the desired level. It’s almost as cumbersome to use as it is to describe.

Otherwise, the ’16 MDX behaves and looks like its commendable predecessors of the last couple years. As one of the lightest vehicles in its class, it handles easily, and displays prompt, undramatic braking. The interior sports wood and bright-metal accents on the instrument panel, doors, and console; the few unpadded hard-plastic surfaces that exist are generally low and out of the way. Head room and entry/exit flow are good in the first two rows. A nearly flat floor opens up the opportunity to carry three passengers in the middle. Second-row seat backs and cushions aren’t quite as comfortable as the front seats, but they do have adjustable backs. Second-row leg room isn’t bad—unless taller front-row occupants need to track back for more stretch-out space. Third-row seats are no place for adults; a low cushion requires knees-up sitting. Youngsters should be able to reach the third row easily enough thanks to a button on either end of the 60/40 middle-row seats that folds the seat back and frees the seat to slide forward.

With second- and third-row seats retracted, a very large, flat cargo floor is created. Cargo loads at bumper height, but the rearmost part of the load floor rises to reveal a sizeable underfloor compartment for incidentals. Interior storage is very good, with large map pockets/bottle holders in the doors, an ample glove box, a deep “split-level” console box, and a covered compartment in the console with a USB port and power points. Open cup holders are found in the console, in the pull-down center arm rest in the middle row, and in the sidewalls next to the third-row seats. 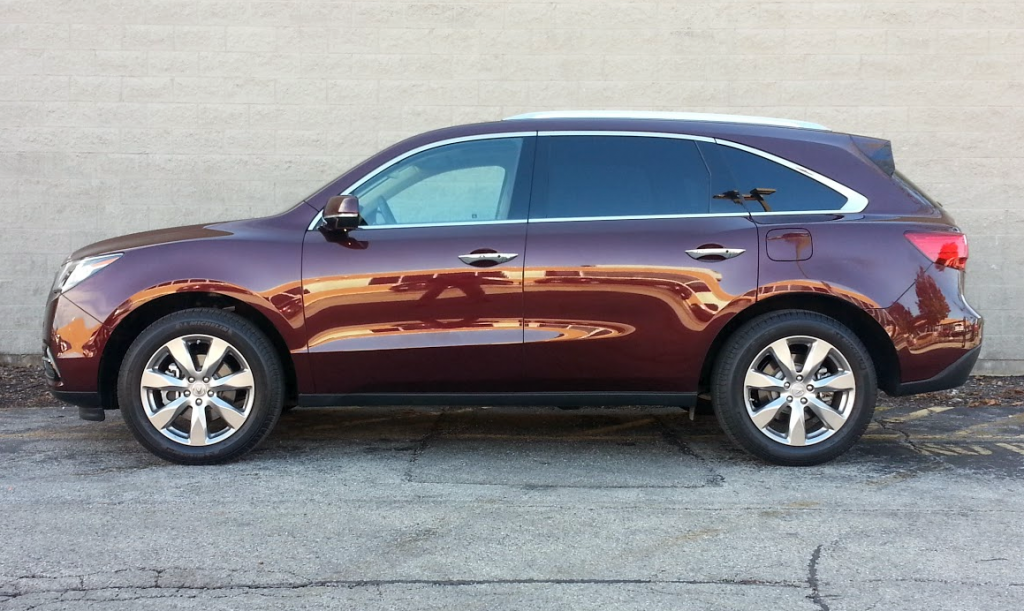 The MDX is built at Honda’s Lincoln, Alabama, assembly plant alongside the mechanically similar Honda Pilot.