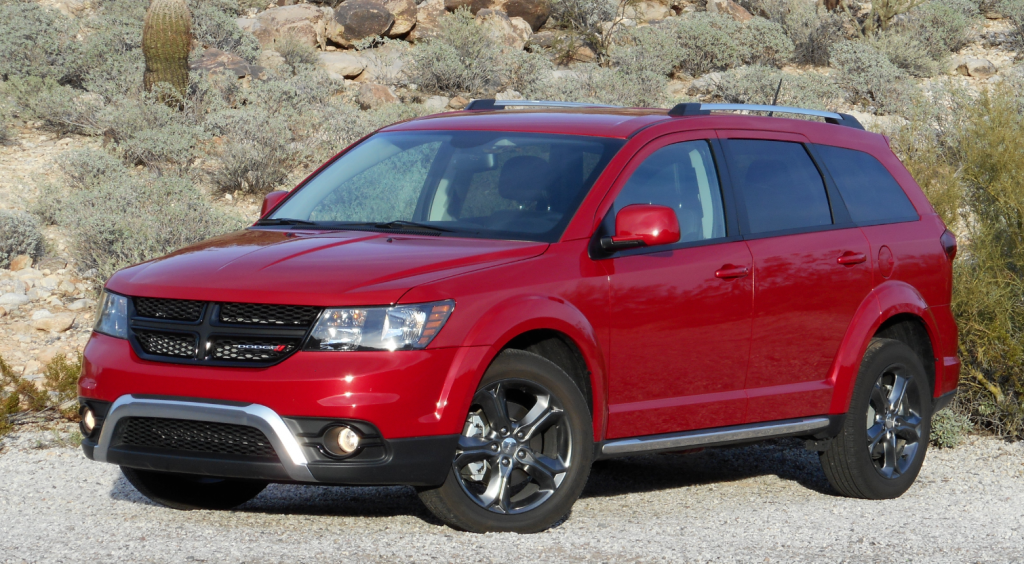 Despite an aging design, the Dodge Journey stands as a very likable 3-row crossover offering a lot of neat features at a near-bargain price. Although it starts at less than $22,000 in 2-row, 4-cylinder, front-drive form, our tester was a higher-end, 3-row, V6, all-wheel-drive model that started at a little over $30,000 and ended up at $34,360 with options.

The great: Passenger and cargo accommodations

The not so good: Front-corner visibility, lack of high-tech safety features

In this age of rapid product replacement, some may discount the Dodge Journey – now in its eighth model year – as an “old” design. That may be. But the fact is, it’s a really good old design. 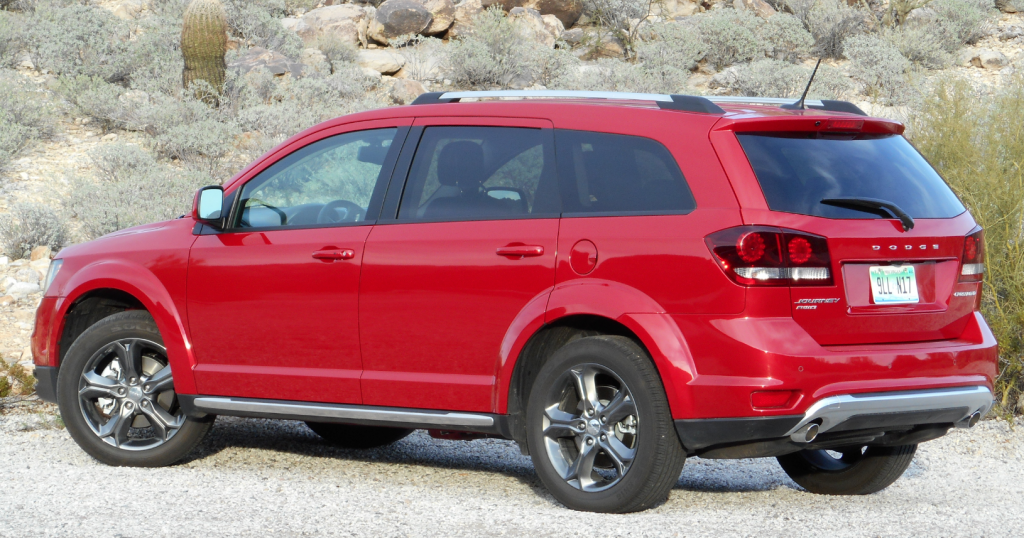 It’s on the small side for a 3-row SUV, but Journey still offers plenty of passenger and cargo space.

That said, even our fairly loaded test vehicle didn’t boast the kind of high-tech safety features one might expect in a modern $34,000 midsize SUV: no lane-departure warning, no forward collision alert, no rear cross-path detection, all of which are commonly offered on Journey’s newer corporate siblings – and on most class competitors. But if you get past those omissions, you’ll find Journey is a darned well-thought-out vehicle.

One of its greatest strengths is its passenger- and cargo-carrying capability. Granted, there are any number of midsize SUVs that offer a 3rd seating row for 7-passenger capacity, but most don’t start at less than $24,000. And while the Journey’s 3rd row isn’t really adult friendly, smaller to average-size grownups can be accommodated for short distances. And it’s pretty easy to get back there, as the second-row cushions flip up to allow the seats to slide fairly far forward, opening up a usefully large portal. The 2nd-row seats also slide fore and aft to balance leg room between the 2nd and 3rd rows; slid all the way back, there’s ample leg room for even large adults in the 2nd row. Furthermore, our tester was equipped with built-in 2nd-row child booster seats ($225), a rarely offered nicety. As in most SUVs, a higher seat height and large door openings make ingress and egress a snap. 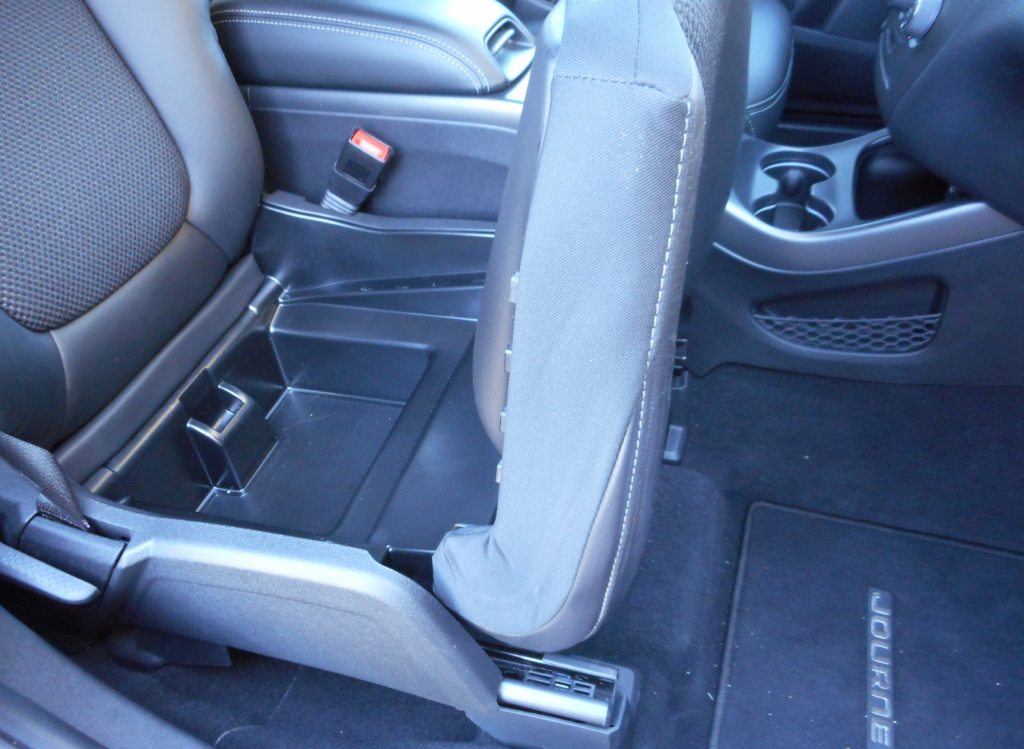 There’s storage under the front passenger seat cushion and small pockets on the console sides.

In addition to the usual selection of storage spaces, the Journey boasts a few “secret” ones. The front-passenger seat cushion flips up to reveal a large bin underneath, something a couple of the Journey’s corporate siblings – and surprisingly few others – also offer. But perhaps unique to the Journey are two bins sunk into the floor of the 2nd row, both of which have removable liners that allow them to be cleaned or drained of water (should someone choose to put wet clothes or iced beverages in there). Very clever.

Our test Crossroad version was powered by Chrysler’s ubiquitous 3.6-liter V6, here producing 283 horsepower. Unlike many newer vehicles in the corporate stable, it’s linked to the “old” 6-speed automatic, which proved much more eager to downshift than the rather recalcitrant “new” 9-speed automatic found in most of Journey’s siblings. Stab the throttle from a stop, and the Journey jumps; hit it while underway, and you get fairly strong passing power.

However, note that the V6 is not the standard engine; in fact, it’s only offered on all-wheel-drive and top-line front-drive versions of the Journey. The other choice is a 173-horsepower 2.4-liter four mated to a 4-speed automatic. While we’ve never driven a Journey so equipped (perhaps they’re purposely shunned for test-car service), it would certainly not exhibit the satisfying punch of the V6. It might get better fuel economy (the EPA ratings are about 2-3 mpg better), but we felt the 21.3 mpg we averaged in 581 miles of 80-percent highway driving was not only reasonable, but quite in line with the EPA ratings of 16 city/24 highway/19 combined. 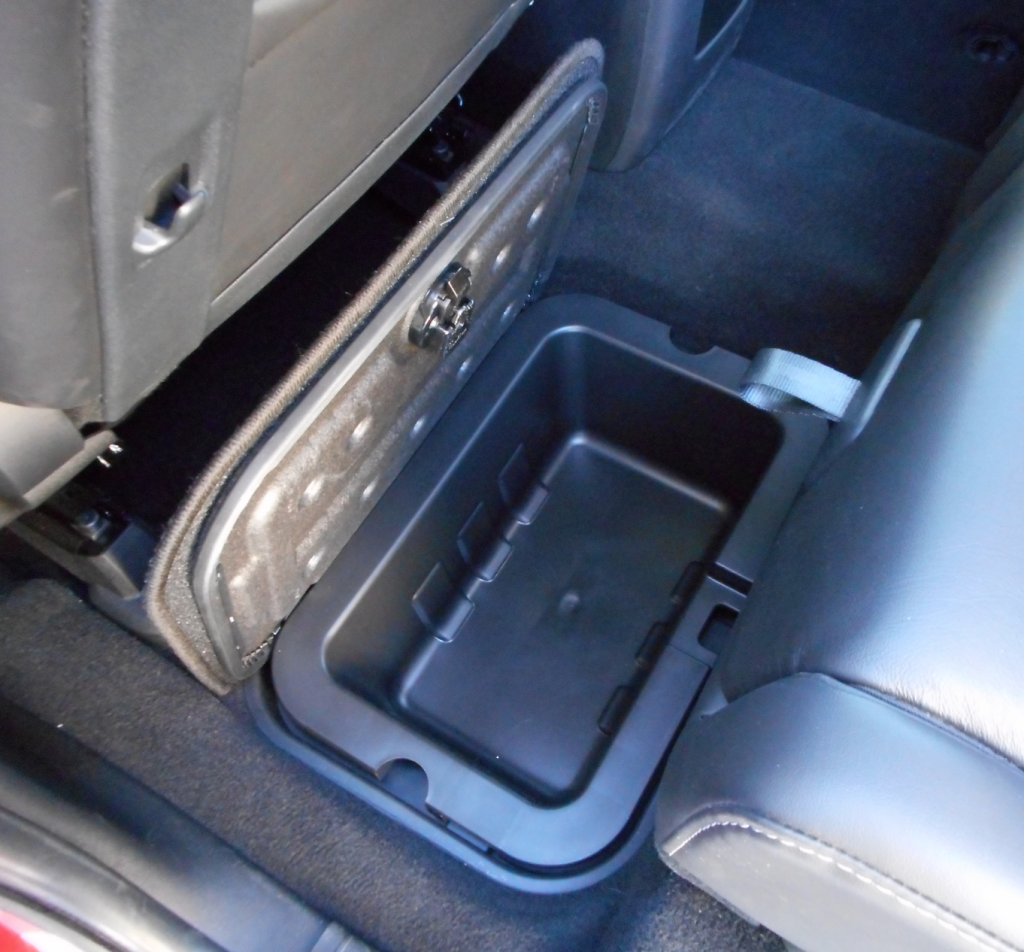 Bins under the floor of the second row can be removed for cleaning or draining.

Although this test took place in Phoenix, Arizona – which “sadly” lacks the kind of pockmarked pavement found near our Chicago HQ – the Journey seemed to soak up most bumps with supple composure. Handling was competent if not really sporty, and parking was eased by light steering effort.

Visibility is restricted to the front corners by fairly thick roof pillars, but it’s okay to the sides. Large 2nd– and 3rd-row headrests block a lot to the rear corners, but if the headrests are either removed or the seatbacks folded, rear-corner visibility is transformed to quite good. An added bonus is a little fold-down “kid vision” mirror in the overhead console that gives a wide-angle view of those in the 2nd and 3rd rows.

The infotainment interface was Chrysler’s well-known Uconnect system, which is far easier to use than most modern ones. There are separate volume and tuning knobs, with all other adjustments being made through the large touchscreen. Most appreciated were the oft-needed “static” virtual buttons that remain at the bottom of the screen, and when you choose AM, FM, or Satellite, the six station presets automatically tune to those in the selected band. All controls are placed high, within easy reach. Climate controls are mounted lower, but still within reach. Fan speed is controlled by a rotary knob, but temperature is adjusted with a tedious repetitive-step pushbutton, and mode must be adjusted through the touchscreen.

The Journey’s all-black interior carried few brightening highlights, but many surfaces were rather thickly padded, including the dash top, door tops, and armrests. Storage is better than average, with a modest-size glovebox, large 2-tiered console box with Aux/USB/12-volt plugs, large forward console bin with 12-volt plug, two console cupholders, small mesh-sided pockets on the sides of the console, and map pockets with cupholders in the doors.

Journey’s dashboard boasts clear gauges, a handy layout, and thick padding, but little in the way of dressy trim.

Speaking of storage, there’s a good amount in back as well. While the sidewalls are no wider than the hatch opening, both the 2nd– and 3rd-row seat backs can be folded flat and level with the load floor, and there’s a large under-floor cargo bin. Our tester was also fitted with a fold-flat front passenger seat (part of an option package) that allows very long items to be easily carried.

The Crossroad AWD version tested lies near the north end of the Journey trim-level ladder, topped only by the performance-oriented R/T. Its $30,590 (including destination) starting price sets it about $3000 above the base SE AWD model, which itself is more than $5000 above its front-drive counterpart (which comes standard with the 4-cylinder engine and two rows of seats). Added to our test vehicle were the aforementioned child booster seats and three packages that included (among other things) such favored features as the aforementioned fold-flat front passenger seat, power driver seat with 4-way lumbar adjustment, 3-zone automatic climate control, automatic headlights, Homelink universal garage-door opener, heated front seats and heated steering wheel (none of which were used during our Phoenix test), remote start, navigation system, SiriusXM Traffic and Travel Link, rearview camera, and rear obstacle detection. As some of these features are pretty high-end for the class, it’s a bit surprising that Dodge hasn’t made equally high-end safety features available. 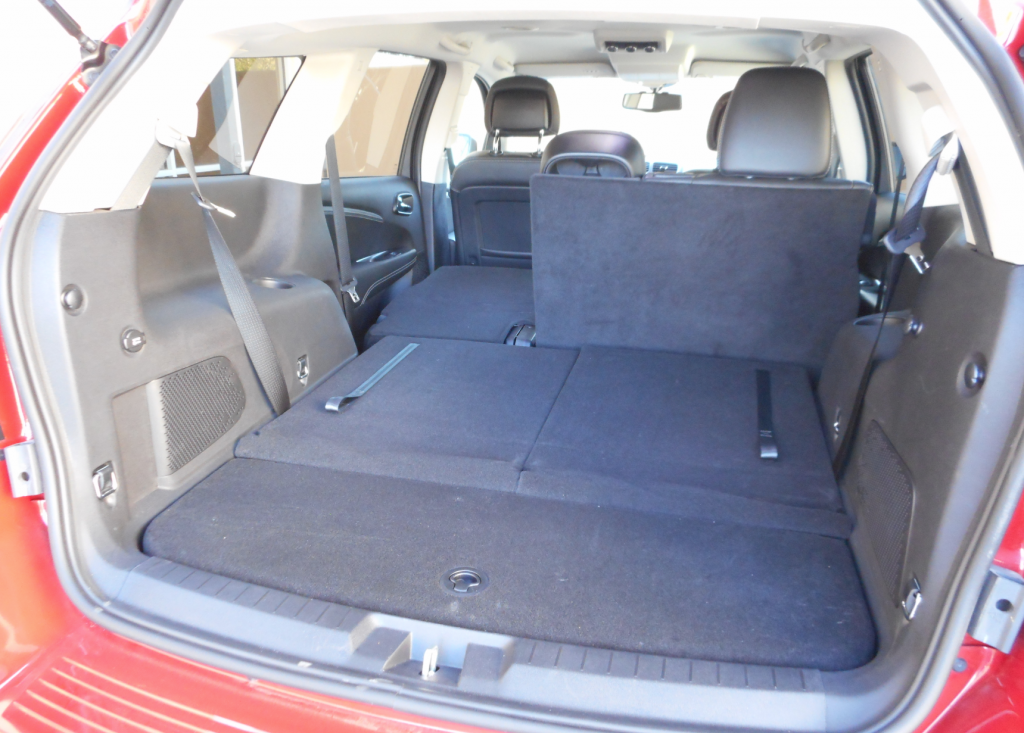 The cargo area isn’t as wide in back as it could be, but the seat backs fold to create a long, flat load floor (and our tester had the optional fold-flat front passenger seat that creates an even longer load floor), and there’s a good amount of extra storage space under the deck.

However, one possible reason the Journey hasn’t been updated is that the future of Dodge itself has been put in question. But if that brand ends up getting dropped (as many have in recent years), we’d hope the Journey gets the nod to carry on as a Chrysler, because – despite its dated architecture – it’s such a darned likeable people mover.