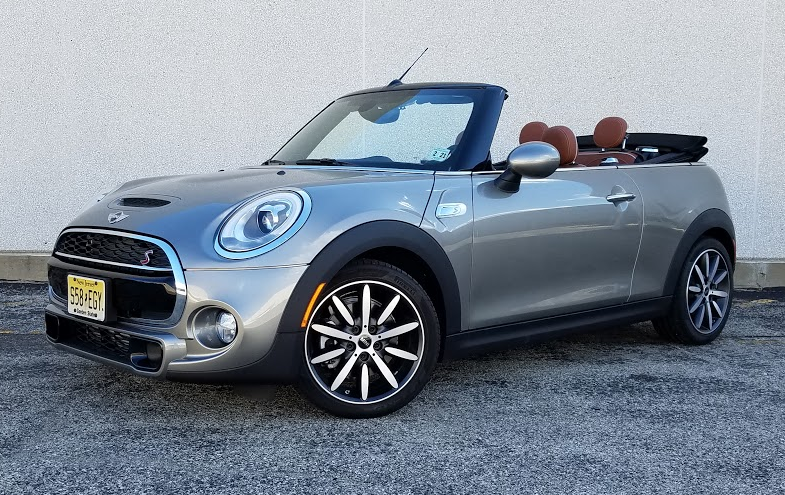 The good: Composed ride for the size and class

The not so good: Prices climb quickly as options are added

The remaking of the Mini Cooper line continues with the arrival of an updated convertible to match the appearance and technical features of the core two-door Hardtop, its four-door spin-off, and the revived Clubman wagon. The 2016 convertible is big on fun and long on whimsy but still short on space.

Just as summer was kicking in, Consumer Guide® editors tested a midlevel S model, which, at a starting price of $29,600, slots between the base model and the hotted-up John Cooper Works version. Power came from a 2.0-liter turbocharged four-cylinder engine mated to a six-speed manual transmission.

Lowering the Mini’s top is a simple single-switch procedure that takes less than 20 seconds.

Though handy in a pinch, the Mini Convertible’s rear seats are nearly useless when the front seats are occupied by anyone of average height or taller.

Convertibles share the wheelbase and overall length and width dimensions of corresponding Hardtops but they weigh a bit more, which makes them marginally slower to 60 mph by Mini’s own stopwatch. As hard as it might be to believe by looking at it, the rear seat of the convertible actually has one-tenth of an inch more legroom than the closed two-door—though still a mere 30.9 inches. However, the soft top is 8.1 inches narrower in rear shoulder room and has considerably less cargo volume. 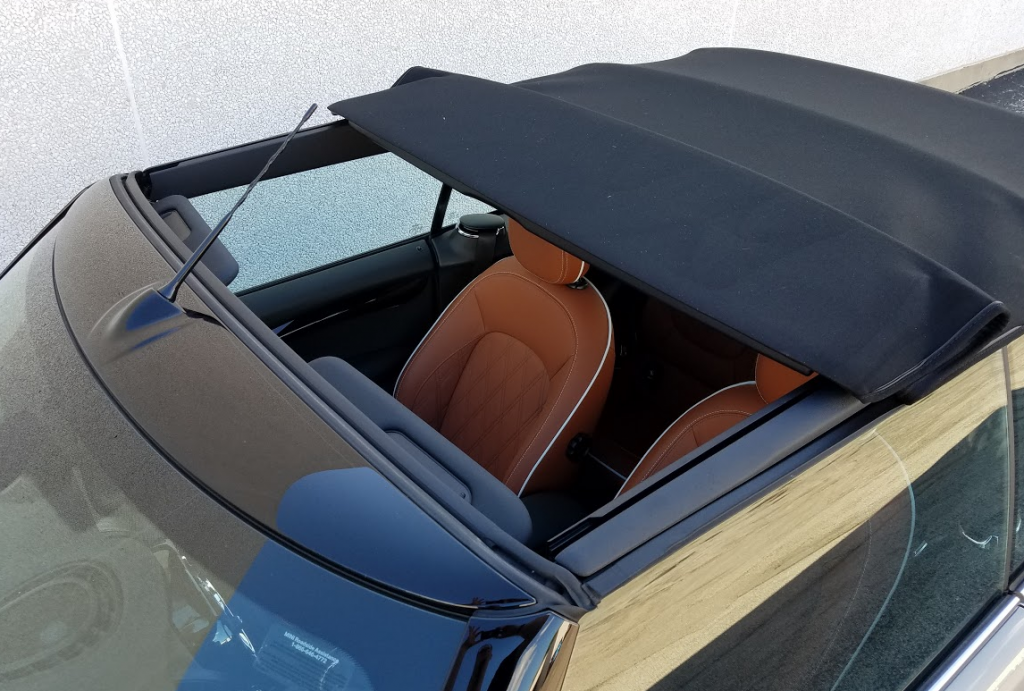 The Mini Convertible’s top includes a sunroof mode that allows for an open-air experience without completely lowering the top.

The Cooper convertible may be pretty impractical from a passenger-and-cargo-room-for-the-dollar standpoint (about which more later), but it is an unabashed hoot to drive. The turbo four in the S is rated at 189 horsepower and 207 lb-ft of torque. Virtually free of turbo lag, it’s an energetic performer, even in base “Mid” driving mode. Via a lever at the base of the shifter boot, drivers can also click into “Sport” or “Green” modes that alter fuel delivery and—in Sport—steering response. The amiable six-speed gearbox shifts with precision and the clutch won’t wear you out even in stop-and-go driving. (An eight-speed automatic is available, with which Mini reports 0-60 mph in 6.7 seconds, while the stickshift car takes 6.8.) If anything was a performance letdown to this reviewer, it was fuel economy. He recorded 21.5 mpg when filling up after a stint of 148 miles, 60 percent of it in city-style driving. However, this powerteam is EPA rated at 23 mpg in the city and 33 mpg on the highway.

On the road, the nimble Mini convertible darts right to where you steer it. It corners very flat, but for a bit of fun the Performance Control system builds in a little slide before correcting your actions. This driver sensed this effect during a couple of his tighter, faster turns but never felt any true loss of control. Ride on the 98.2-inch wheelbase is undeniably firm. There’s some body “flexibility,” especially the faster you go. Still, for a convertible, it’s decently quiet with the top up, and does a good job of managing wind buffeting to front-seat passengers with the top down. 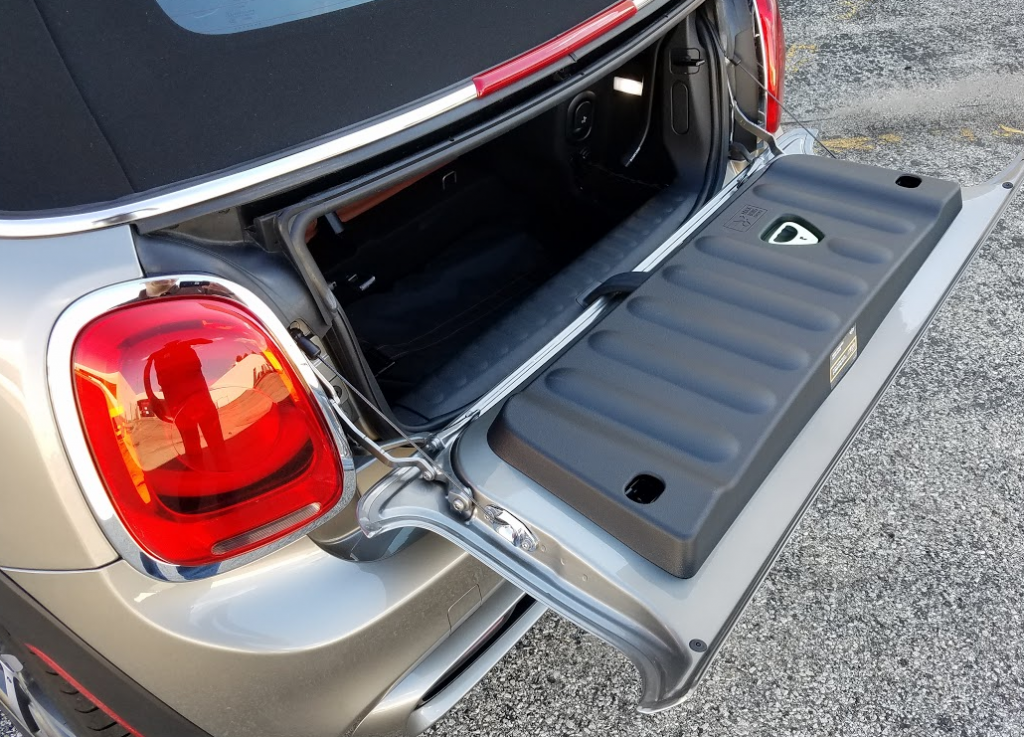 The Mini Convertible’s trunklid is bottom hinged to form a handy staging area, but it doesn’t open to very much useful storage space.

Speaking of the top, it powers up or down at the press of a lever on the windshield header in about 18 seconds. The forward portion of the top can be opened like a sunroof—it makes a stop above the front seats before the side rails unlock for full top retraction—though there can be a lot of wind noise in this position. Not surprisingly, over-the-shoulder vision with the top up is nowhere nearly as good as it is in the Mini Hardtop, and if the rear headrests are raised, they intrude on the view through the rear window.

Controls are the same as in any other current-generation Mini Cooper: speedometer and tachometer gauges attached to the tilt/telescoping steering column; a large, round in-dash display for the audio system, vehicle information, and rearview camera; a row of toggle switches for things like the starter and traction-control activation low on the instrument panel; and rotating dials to set temperature and fan speed for the climate system. A complex console-mounted central controller accesses and operates the various conveniences that appear on the dash screen. Considering who Mini’s corporate parent is, this unit behaves very much like the BMW iDrive—for better or for worse.

The test car’s cabin was dressed up with Malt Brown Chesterfield upholstery. These plush leather seats feature a distinctive diamond pattern of stitching. Overall interior ambience is slightly upscale. There’s a fair amount of soft-touch material in front, but side panels in the rear-seat area are hard plastic. Front passengers can take advantage of pretty good legroom—unless they want to try to make space for a couple of rear passengers. It’s probably not worth the effort. Legroom is virtually nonexistent if “normal-sized” folks are in front, rear seat backs are uncomfortably upright, and side panels press right up against anyone who might wriggle their way back there.

Storage is equally limited. Small pockets are found in the doors and sides of the rear compartment. Two open cup holders are at the front of the console ahead of shifter but just one cup holder is provided in back. There is a small glove box, a tiny covered compartment in the flip-up armrest, and pouches on the backs of the front seats. The cargo hatch is more of a tailgate (it’s hinged at the bottom) than a trunklid. Unless the 50/50-split rear seats are folded down, there’s only room for a gym bag or two in the trunk.

As it has been since its debut about 15 years ago, the modern Mini Cooper remains an extravagance among small cars. It would be easy to completely dismiss it—if only it weren’t so darned much fun to drive. 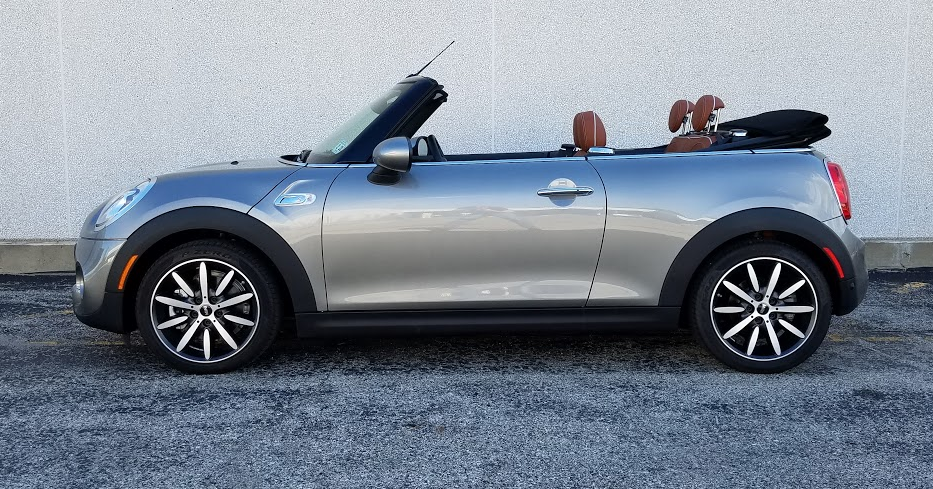 The Mini Convertible’s top doesn’t disappear fully into the body, leaving a stack that slightly obscures visibility to the rear.