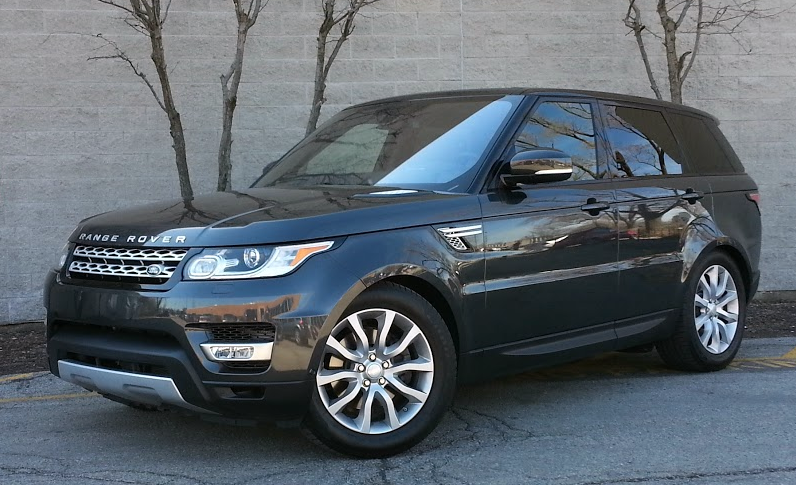 Fitted with the new turbodiesel V6, the 2016 Land Rover Range Rover Sport HSE starts at $72,445 including destination–about $1500 more than with the standard supercharged gas V6. A host of options brought the bottom line of our test vehicle to just over $87,000.

The not so good: Price 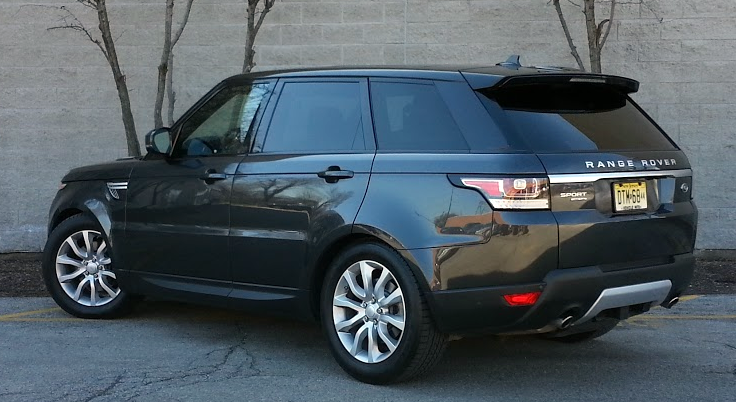 Visibility is quite good all around, as is passenger room. We averaged an impressive 23.2 mpg in 205 miles of 75 percent city driving, which is right in line with the EPA estimate.

Well, Land Rover could say, there are some new available features for the Range Rover Sport like a rearview camera-lens washer, hands-free power liftgate, and All Terrain Progress Control (a low-speed “cruise control” feature that maintains a consistent pace over rough terrain). Oh, and then there’s a turbodiesel 3.0-liter V6 engine.

This new powerplant was under the hood of the Sport HSE Td6 that Consumer Guide® editors tested, and it showed itself to be a strong-hearted piece of work with a frugal side. Horsepower is rated at a middling 254, but torque is a diesel’s meat, and this one is well done at 443 lb-ft peaking at 2000 rpm. Those figures are quite different from the Sport’s other available 3.0-liter V6, a supercharged gas job of 340 horsepower and 332 lb-ft. With the diesel engine there’s immediate and rapid getaway from standing starts—though it can be a little hard to sustain. Land Rover says the Td6 will go from 0 to 60 mph in 7.1 seconds, a couple tenths slower than the blown gas V6 will do. The diesel Sport will cruise easily on the highway, but midrange acceleration trends more towards “good” than “great.” Plus, the Sport’s diesel is subject to some of this engine type’s notorious clatter at idle and under acceleration, so it’s not as quiet as the gas engine.

One sound Td6 owners won’t hear so often is the ding of a filling-station pump. Working with an eight-speed automatic transmission and incorporating a stop/start feature (that can be switched off), the turbodiesel is rated by the EPA at 22 mpg city, 29 highway, and 25 combined. After driving the test vehicle for 152 miles, 70 percent of that in city conditions, this driver saw 26.2 mpg. The last time he drove a gas V6 Sport under very similar conditions, it returned 15.41 mpg. The Td6 used up only about a quarter tank of fuel while in this writer’s hands, suggesting a driving range somewhat in excess of 600 miles.

The aluminum body structure is quiet and tight feeling. Even with standard 20-inch alloy wheels, on-road ride is smooth and pretty well isolated from road jolts. CG’s test truck came standard with electronically controlled independent front and rear air suspension. Also included are full-time four-wheel drive and a Terrain Response System with settings for “General,” “Snow,” “Mud,” and “Sand” operation, governed by a dial and buttons on the console. 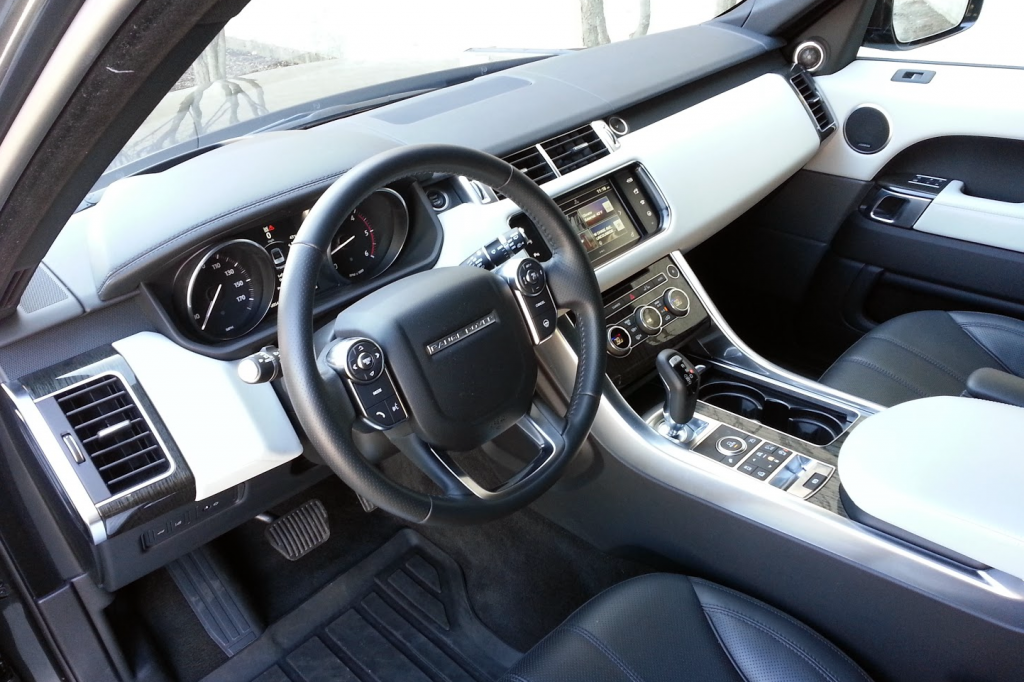 Interior materials match what you’d expect from a Land Rover, and controls are fairly easy to adjust.

Materials throughout are in keeping with the brand’s luxury reputation, with abundant use of soft-touch surfaces and wood veneer highlights. Standard perforated-leather seats (heated in front) are comfy and cosseting for four, but there’s room for a third in back, albeit on a stiff, slightly raised center section. Leg- and headroom are ample in either row. Doors open wide to aid getting in or out, though step-in height is a little tall. Big windows and fairly thin (for the era) roof pillars aid all-around vision for the driver.

Personal-item storage for front passengers consists of large door map pockets; a big glove box; twin cup holders with a slide-top cover; and a covered cooler console box with small side dimensions, but a deep drop. (The box sits far back on the console, which makes it difficult to reach into easily.) Rear occupants get smaller door pockets that can serve as bottle holders. There are mesh pouches in the seat backs ahead of them, and they have access to small open bins, a plug-in power point, and seat-heater buttons built into the back of the console. There’s also a pull-down center armrest with twin cup holders and a shallow covered compartment.

At the rear is a big flat-floored cargo area with a conveniently low lift-over. The Sport HSE comes with the automatic-opening tailgate to further uncomplicate loading. While rear seats fold in a 60/40 split to provide a lot more hauling capacity, they don’t drop especially flat. 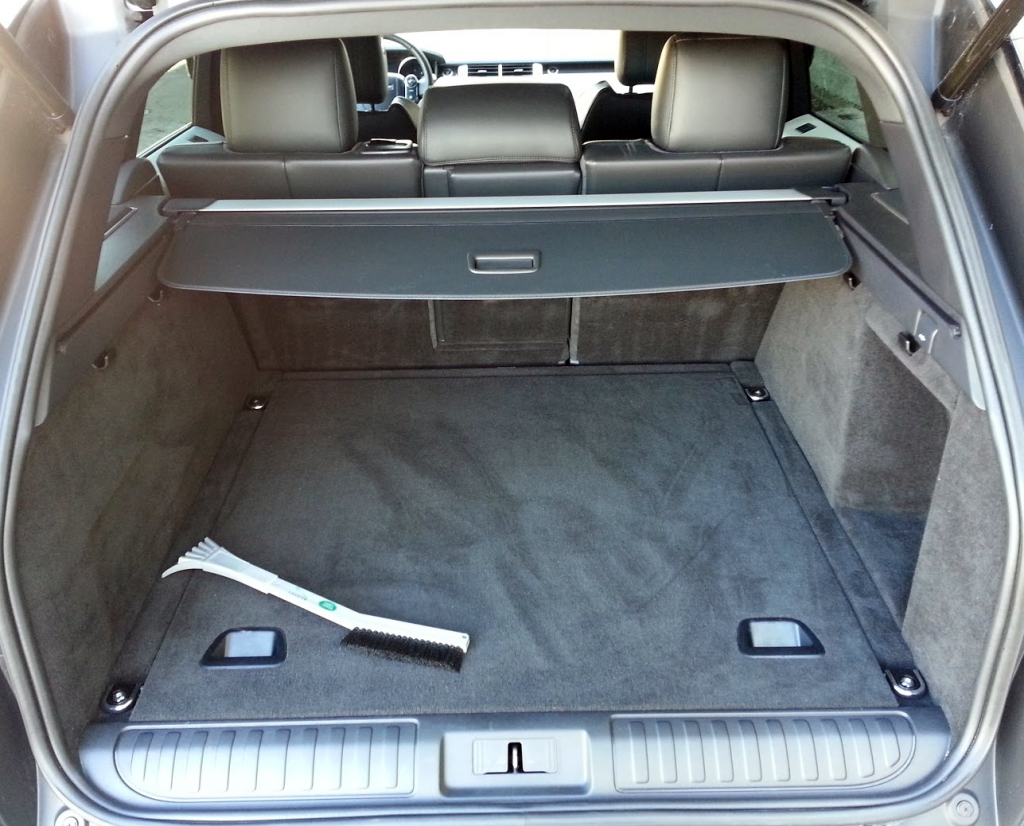 A low liftover aids cargo loading, and the space itself is quite large, if not very wide.

Other comforts and conveniences start with dual-zone automatic climate control, a panoramic sunroof with power-retracting blind, a heated windshield with solar-reflective glass, ambient lighting, front and rear parking assists, a rear-view camera, and rain-sensing windshield wipers. Communication and infotainment gear includes Bluetooth phone connectivity, USB and auxiliary inputs, satellite and HD radio, and navigation. Audio, navigation, and other personal settings are accessed through an eight-inch touchscreen that has different graphics than the system found in a Jaguar XF that CG recently tested but the same arrangement—and easy functionality—of controls. (The brands are corporate kin, after all.) If voice commands are to be carried out, they seemingly have to be delivered in a fairly specific way. Climate controls not found on the touchscreen—including temperature and fan-speed settings—are adjusted via dials lower on the dash, with buttons for other functions.

That’s what Land Rover will do for you for the $71,450 base price of a Sport HSE Td6 (which is $1500 more than an HSE with the supercharged gas V6). There’s plenty more that you can do for yourself with an extensive options list. CG’s tester came in at all of $87,060 delivered, thanks to four packages that added features like heated steering wheel and rear seats, rear cross-traffic and lane-departure warnings, a two-speed transfer case, and All Terrain Progress Control; plus individual items like an audio upgrade and premium paint.

The new diesel engine turns the Land Rover Range Rover Sport into a fairly frugal luxo SUV, and numerous available features make it able to suit almost any need–though at a price.