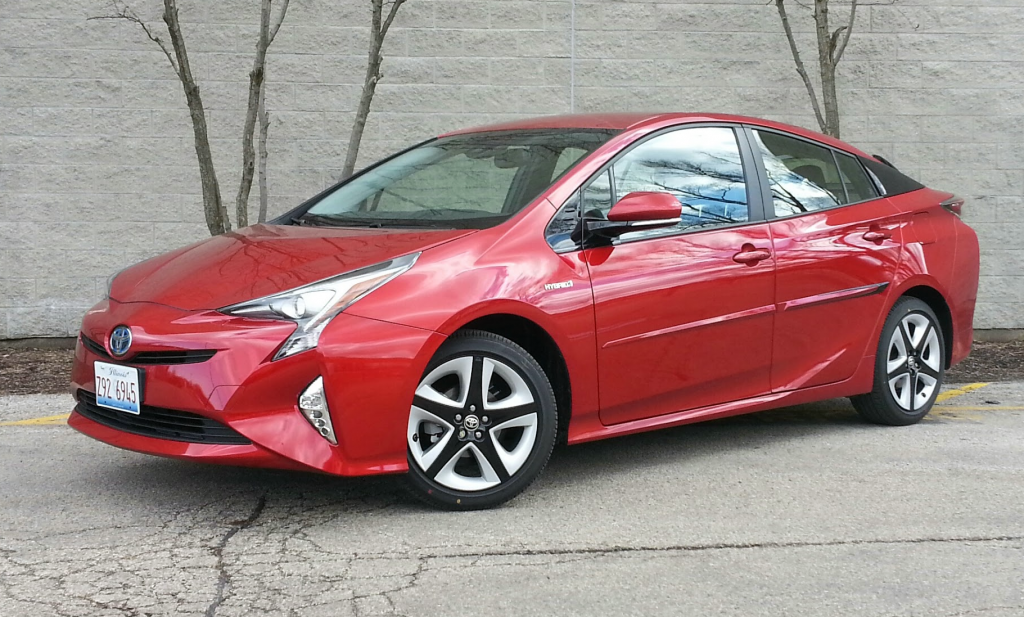 The not so good: Visibility to rear corners, rear-seat legroom

Your friendly, neighborhood Consumer Guide® editors are not going out on any kind of limb by saying the primary appeal of the Toyota Prius compact hybrid is its ability to stretch a gallon of gasoline. In its new fourth-generation form, it does that with some pretty gaudy fuel-economy numbers. However, the creeping realization that comes from driving the top-trim version is that Toyota has managed to turn it into a pretty nice all-around small car for which high mileage is a welcome bonus. 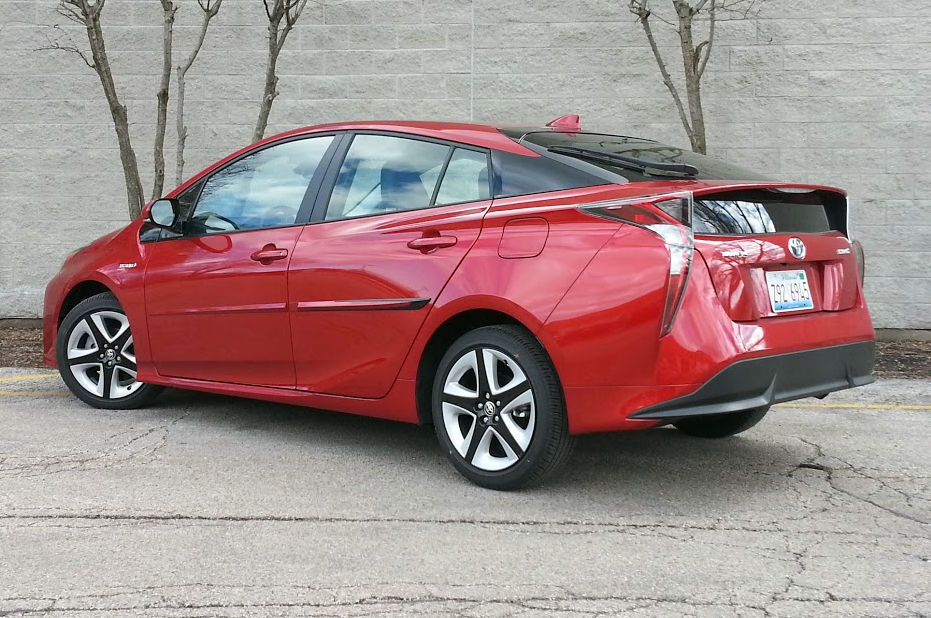 The Prius Four Touring (starting price: $30,000) that CG tested delivers decent performance and driving dynamics with a fairly pleasant interior package. If not for the quiet electric-mode starts and the torrent of system-monitoring graphics pumping out information, it would be easy to think of this as a mainstream compact hatchback—all the more so thanks to new styling with a little more flair that starts to get away from the nerdy “experimental research vehicle” vibe of earlier generations. 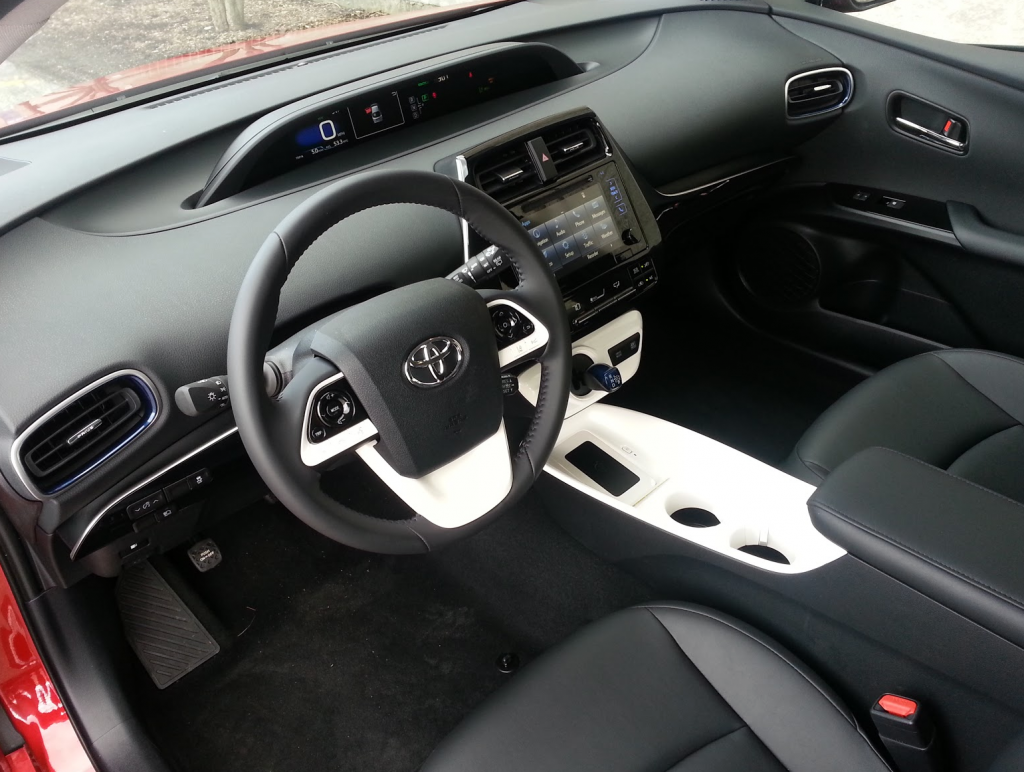 The Prius cabin is nicely finished, though the white “ceramic” trim pieces drew mixed reviews from our staff.

A combined-system 121 horsepower is produced by the Prius’s 1.8-liter four-cylinder gasoline engine and synchronous alternating-current motor, channeled through a continuously variable transmission. Depending on the drive mode selected—“Normal,” “EV,” “Eco,” or “Power” are available at the push of a button—the Prius gets off well from a standing start, and cruises comfortably on the expressway. The Power setting has quicker response to the throttle, which helps highway passing. Eco is best left to surface-street errand runs. Transitions from electric-motor operation to the gas engine are nigh on undetectable.

This latest Prius’s EPA ratings are 54 mpg in the city, 50 on the highway, and 52 combined. It’s doable. With some miles inherited from a colleague, this driver recorded 49.7 mpg upon filling up after a 218-mile stint, 70 percent of which was city-style driving. That was quite a bit better than the 47.9 mpg that yours truly saw from the Prius Three in wintertime driving. 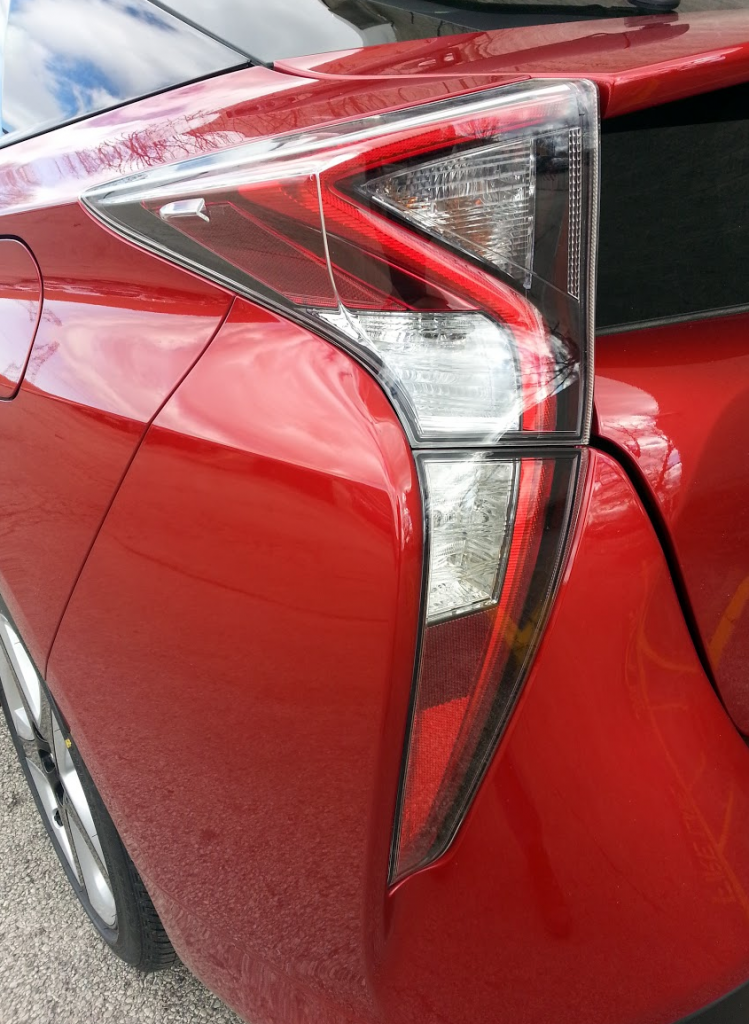 The ’16 Prius’s styling may be controversial, but it is also distinct. Even casual observers are unlikely to mistake the Prius for any other car.

Steering and braking seemed a little better buttoned up in the Four Touring than in the earlier 2016 Prius test car. Ride quality is pretty good for a small car. The biggest flaw might be a somewhat high level of tire noise in highway driving.

The black leatherlike seats are comfortably supportive. Front seats are heated in the Four Touring but the heater buttons are positioned near the floor and are hard to reach. As for the shiny, white surfaces on the center console, lower dash, and steering wheel, it’s safe to say Prius drivers will never forget to schedule their next dental appointment. Driving instruments and vehicle information show up on a bright screen atop the center of the dash. Audio and navigation displays are on a separate screen in the middle of the dash, above climate controls that mix function buttons and toggle levers, the latter for temperature, fan-speed, and mode settings. The familiar Prius “T”-track shift lever resides in a panel below the climate controls.

Leg- and headroom are best up front, somewhat less so in back. (The 2016 redesign adds cargo space but trims legroom by 2.5 inches.) Realistic adult rear seating is confined to two persons. The seating position has been lowered in the new Prius, but there’s still fine outward vision through the large windshield and side windows. The view to the rear corners isn’t as good thanks to the sloping roof that ends in a substantial rear pillar. The rear view is hampered by a horizontally divided two-pane design that’s been a hallmark of the Prius since it became a hatchback.

As for interior storage, the glove box is pretty much big enough to hold the owner’s manual but little else. A deep console box with an adjustable tray makes up for that shortcoming somewhat. The console houses a large forward bin, a pair of open cup holders, and plug-ins for digital devices and 12-volt power. Front doors have map pockets with bottle holders, but cuts in the rear doors are only big enough for bottles. Pouches are attached to the backs of the front seats, and cup holders reside in the pull-down center armrest.

The rear cargo hatch has a slight lip, and loading is easy. Space is good enough for a bit of luggage or lots of groceries, but options expand when the rear 60/40 seats are folded. The cargo floor sits a few inches below the folded seat backs.

With delivery and a short list of individual options ($395 Hypersonic Red exterior paint was the priciest extra item), CG’s top-of-the-line test Prius came to $31,827. There are more involved option packages available, mostly with added technology—you know, just like all the cars that aren’t hybrids. 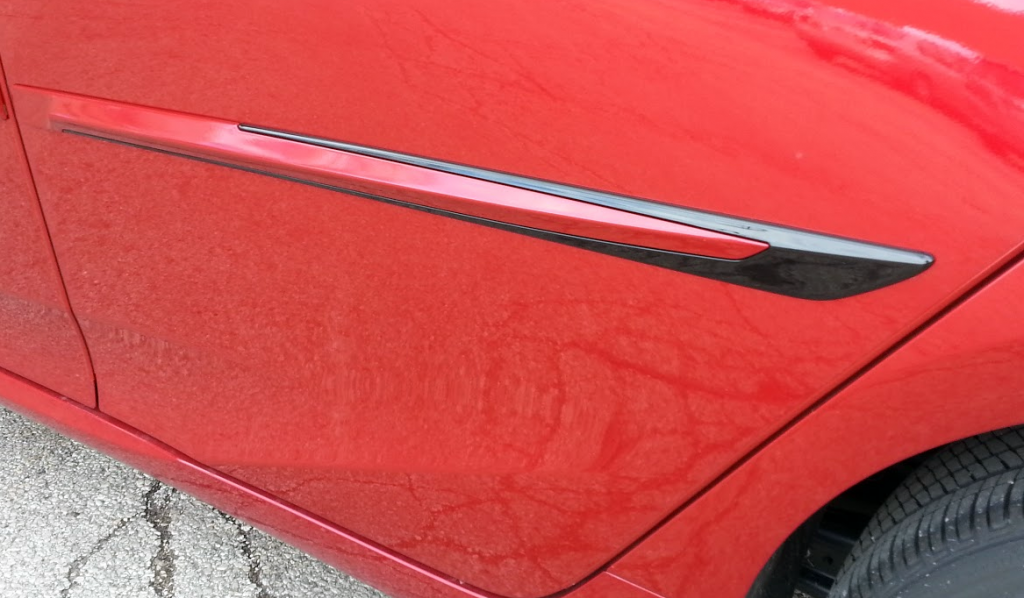 The $289 bodyside moldings call attention to themselves with a contrasting black insert–a dubious design flourish according to some of our testers.

What a difference a season makes. It was January when we first welcomed a 2016 Prius to Consumer Guide HQ, and the average temperature at the time was in the low twenties. Skip forward four months, and the Prius Touring featured here arrived at our doorstep. The difference? About 30 degrees and more than four mpg. Not that the 47.5 mpg we saw with our first ’16 Prius disappointed, but pulling down almost 53 mpg is flat-out impressive. Ours, of course, is just another example of the impact of cold weather on lithium-ion batteries. In the case of the Prius, it seems that Chicago winter temps will take about a 10-percent toll on fuel economy–not a big deal, but worth knowing about.