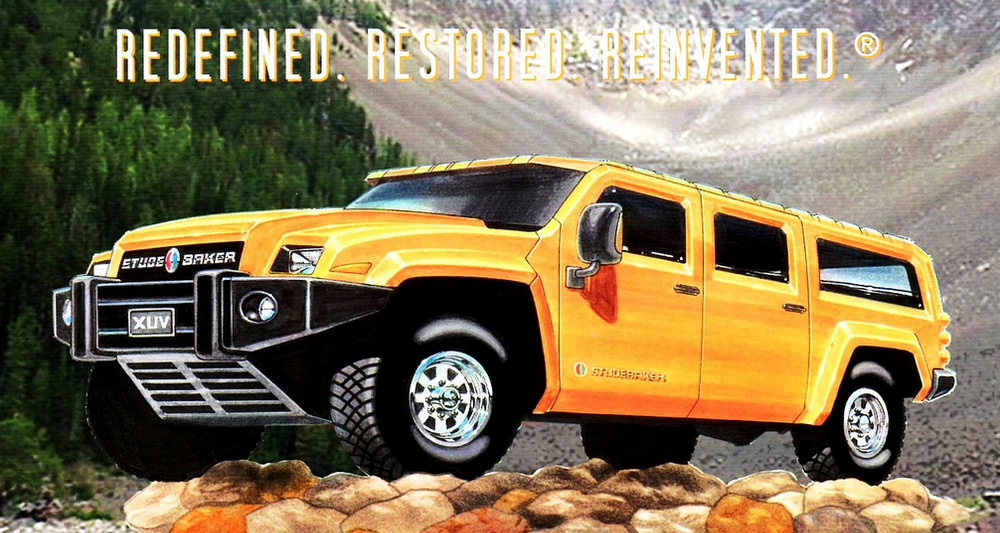 This rendering exaggerates the length of a truck that, in prototype guise, was already very long.

If you attended at the Chicago Auto Show back in 2003 or 2004, you might have seen a Hummer-like SUV with “Studebaker” stamped on the liftgate. Posed by some rugged-looking rocks in a small Avanti Motor Corporation display, this hulking behemoth was a Hail Mary attempt by struggling Avanti Motor to cash in on the then-booming mega-SUV market. How did such a bizarrely branded vehicle ever come to pass? What was the Studebaker XUV? Read on…

What was the Studebaker XUV?

A bit of history is in order. The Studebaker Corporation got its start building horse-drawn wagons in South Bend, Indiana in 1852. By the turn of the century, Studebaker was perhaps the largest wagon manufacturer in the world. Studebaker entered auto production in 1902, and during the Teens and Twenties was one of the nation’s largest automakers. By 1963, Studebaker was in trouble, but executives hoped the striking new Studebaker Avanti coupe would turn the company around. Sadly, the Avanti failed to sell in the numbers needed. Studebaker closed its South Bend plant at the end of 1963 and the last Studebaker was built at the company’s Canadian plant in 1966. 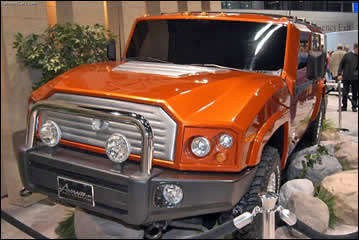 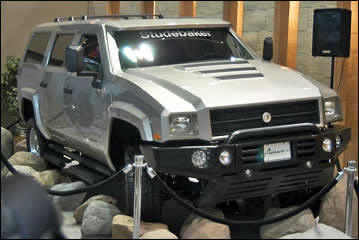 Nathan Altman and Leo Newman were Studebaker dealers who saw a future in the discontinued Avanti. They bought tooling and a building in the shuttered South Bend complex and started building their Avanti II in small numbers. As a low-production luxury car, the Avanti found a degree of success. Avanti II had a loyal following and carried on under the Altman regime until 1982. After that, Avanti Motor Company was owned by a series of real-estate developers. The final owner, Michael Kelly, built a new car with Avanti styling cues on a Pontiac Firebird platform starting in 2001.

The Coolest American Cars of 1962 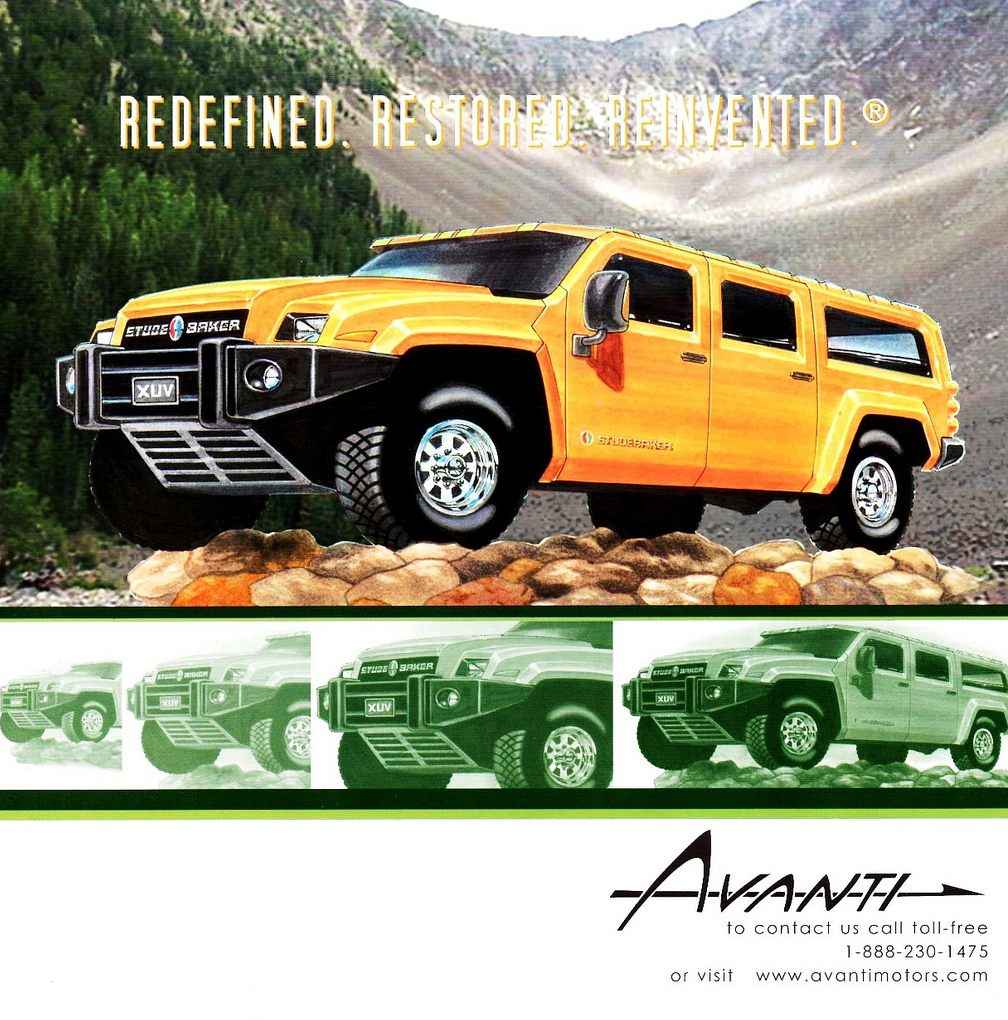 Studebaker XUV production was to reach a claimed 1000 units annually, but the project never got past the prototype stage.

As the tastes of American buyers shifted heavily toward rugged, thirsty sport-utility vehicles, Kelly tried to expand the market with the Studebaker XUV (Xtreme Utility Vehicle).  Apparently Avanti Motor acquired the rights to the Studebaker name, which had not been used for Avanti IIs. The XUV was to be built on a 2003/04 Ford Super Duty pickup chassis and use either a 310-hp Ford 6.8-liter V10 or 325-hp 6.0-liter Ford Power Stroke Diesel V8. A supercharged, 425-hp version of the V10 was also to be available. The starting price was to be $75,000, and Avanti planned to build 1000 XUVs a year.

With a wheelbase of 134 inches, an overall length of 216 inches, and a curb weight of around 6000 pounds, the XUV was as hefty as a Hummer H2… and also had styling remarkably similar to the H2. So similar, in fact, that General Motors sued, claiming “Avanti Motor Corp. is attempting to profit from and capitalize upon the enormous popularity and goodwill that GM has developed in the wildly successful H2 by knocking off the H2.” (Remember, this was 2003.) The case was settled out of court, with Avanti agreeing to make minor changes to the Studebaker.

The Studebaker XUV was slated to have unique features such as power-sliding rear side doors (as found on a minivan) and a retractable rear roof section inspired by the 1963-66 Studebaker Wagonaire and similar to the 2003-05 GMC Envoy XUV. (At least GM didn’t sue over the theft of the XUV name.) The lawsuit generated quite a bit of free publicity, but the XUV didn’t get beyond the prototype stage.

In 2006, Michael Kelly was arrested and charged with selling fraudulent timeshare leases and promissory notes, ultimately defrauding some 8000 investors of approximately $500 million. Avanti Motors folded in 2007. In the end, the last Studebaker truck was better known in the legal system than on the road. 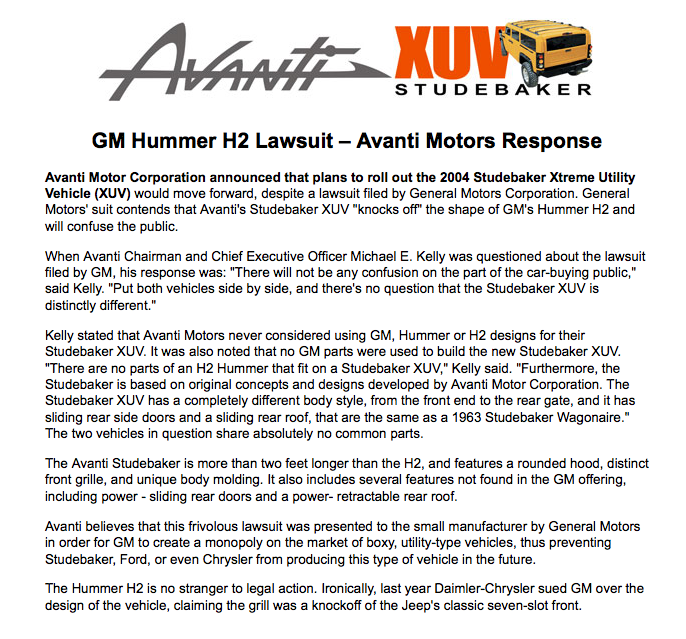 The General Motors lawsuit probably brought the Studebaker XUV more attention than it ever would have gotten through traditional media.

What was the Studebaker XUV