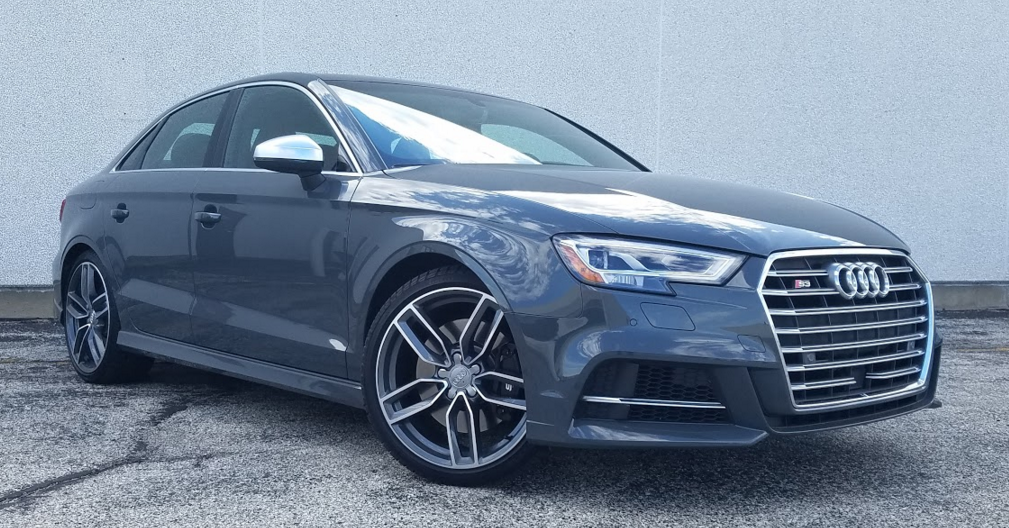 The good: Decent ride quality and fuel economy for the performance 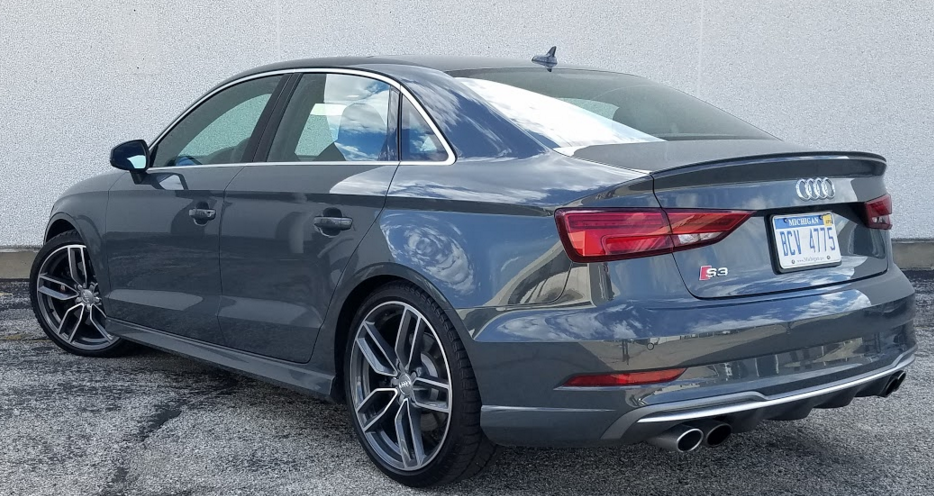 That “S3” badge on the trunklid brings with it a host of performance improvements, among them an extra 72 horsepower over the rating of the “pedestrian” AWD A3.

It’s really hard for me not to like a pocket rocket, particularly one with this level of refinement and build quality. But like so many such affections, it sadly doesn’t come cheap.

Audi’s S3 – the smallest (and least expensive) of the company’s performance-focused “S” series of sport sedans – is essentially an Audi A3 compact sedan on steroids. The S3 shares its all-wheel-drive platform and 292-horsepower 2.0-liter turbocharged engine with the Volkswagen Golf R, which costs a bit less, offers fewer features, and comes only as a 4-door hatchback. The A3, on the other hand, is offered in front-drive form with a 186-horsepower engine, or in all-wheel-drive form with 220 horsepower. The S3 also earns its “S” label by topping its A3 sibling with a quicker steering ratio, larger brakes, and 18-inch wheels vs. 17s.

As noted in the spec box above, the S3 starts at $42,900, just above where a Golf R ends. Add some options — as was done with our test car — and the tab can easily top 50 grand. So like I said … not cheap. But for those interested in a small, sporty sedan, the S3 has a lot going for it.

It may look a bit bland at first glance, but the S3’s interior hosts quality materials. For a bit of added flair, you can opt for red leather upholstery.

Step inside just about any recent Audi, and the initial impression is … underwhelming. Kind of drab, really. But closer inspection reveals high-quality materials and an underlying stateliness that says these cars are designed for more refined tastes. And the S3 is no different. There’s padding under many of the all-black surfaces (two-tone black-and-red is also offered), but it’s so firm as to initially feel “hard.” Slashes of black, brushed black, and silver trim do little to brighten the look, but the overall feeling is one of understated class; “businesslike” if you will.

Visibility is fairly good to the front and rear corners, but really thick and close side pillars block a lot over the shoulder. That made me appreciate our tester’s blind-spot alert, but it’s only offered as part of the $3000 Technology Package, which otherwise might not be needed. Our S3 also had a rearview camera and 360-degree “birds-eye” cameras, but both would be more useful if their displayed images on the dashboard screen were larger.

There’s good headroom and legroom in front, and while the driver seat included height adjustment, cushion tilt, and even a thigh extension, I was surprised that all were manually adjusted. In back, headroom is only sufficient for those up to about 5’9, and though legroom is fine behind a normal-size front-seater, maxing out the front seat travel leaves virtually no legroom behind it.

Our test car included Audi’s MMI infotainment interface, which relies on console-mounted volume and main control knobs along with a couple of buttons and “flippers” for adjustments, with their actions being displayed on a protruding dashboard screen. Like many other layouts of this type, it takes some practice to execute desired actions. By contrast, the climate system is controlled by rotary temperature and fan-speed knobs along with individual pushbuttons for mode, a simple layout that is both compact and easy to use. 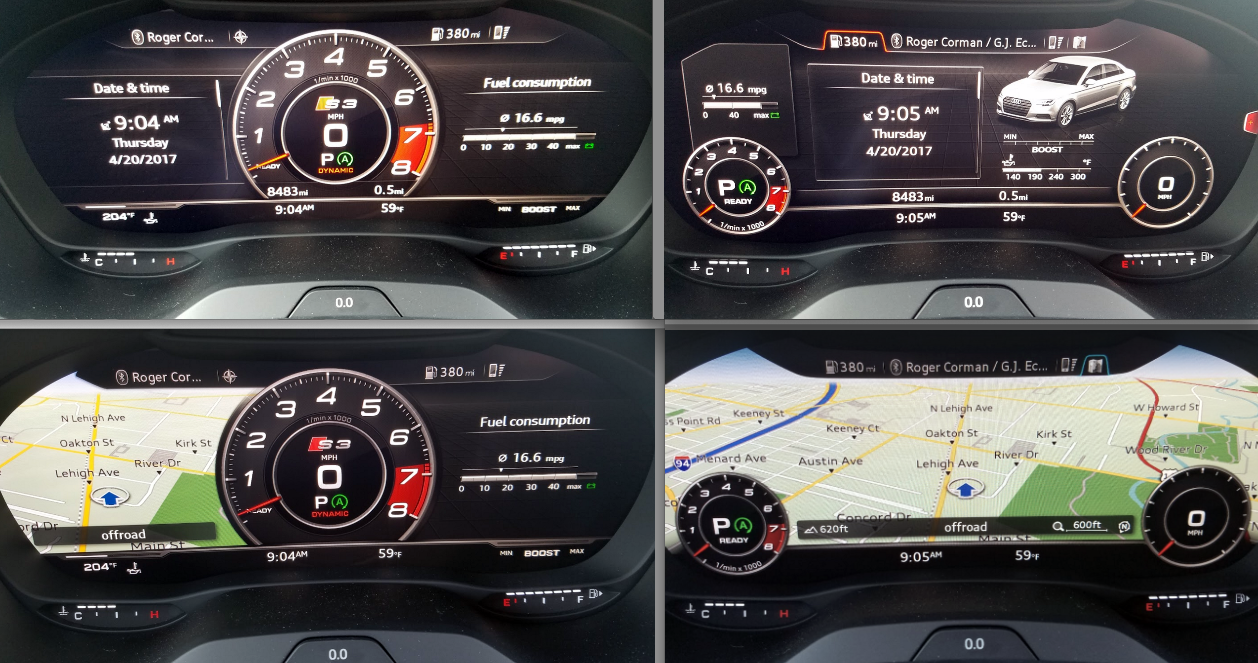 Several different instrument-panel screens can be chosen depending on what information you want front and center.

Also included on our tester was a screen-type instrument panel with configurable graphics. While some might prefer physical round gauges in a sporty car, the advantage here is that the driver can choose between a number of displays that provide different information, including ones that show navigation directions or a map. And one of the choices is a traditional round center speedometer, which looks fairly convincing unless you scrutinize it closely.

Cabin storage space is rather meager. USB and Aux jacks can be found inside the small console box, while USB and 12-volt plugs are located above a small tray at the front of the console. Trunk space, however, is quite good, as the area is fairly wide at the rear and goes well forward. There’s also a fair amount of under-floor storage, though it’s far forward and thus out of easy reach, and though the seat backs fold to expand the space, they won’t rest anywhere near flat unless the front seats are well forward. 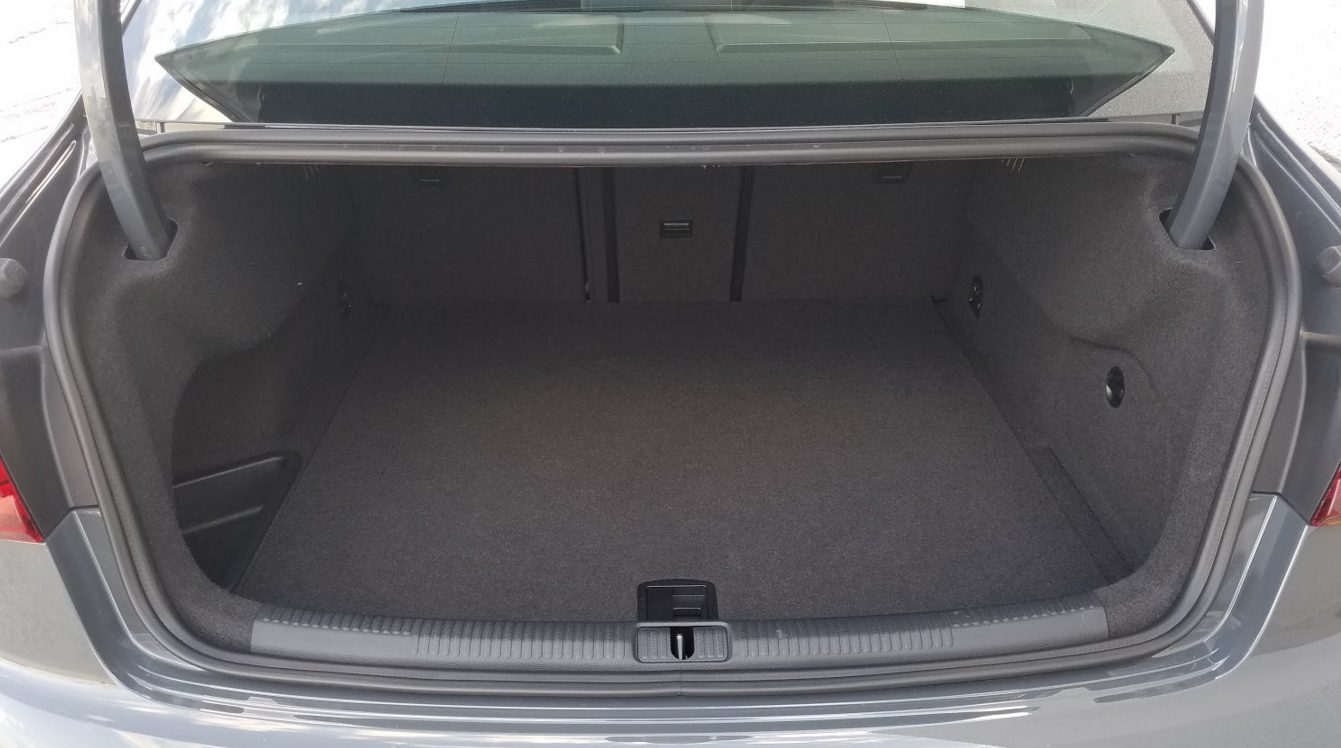 Fairly wide and quite deep, the S3’s trunk is deceivingly large, and there’s some additional storage space under the floor.

On the dash is a Drive Select button that allows you to toggle between “Comfort” and “Dynamic” modes. Dynamic raises the idle speed, holds gears longer as you accelerate, and keeps the transmission in a lower gear at virtually any given speed – ostensibly for quicker throttle response, as the engine is spinning faster – and also stiffens the suspension. That makes it great for spirited driving on a smooth, twisty road, but Normal is much more suitable for everyday driving, as the ride – which is already on the firm side – gets brittle in Dynamic. In either mode, there’s the typical “small turbo” laziness from a full-throttle start, but power comes in shortly thereafter for rather spirited if not altogether linear acceleration. Nailing the throttle while under way results in fairly quick transmission kickdowns for good passing power. Audi claims a 4.7-second 0-60 time for the S3 – likely in Dynamic mode – but using Normal mode, I averaged 5.8 seconds over four runs. Speaking of “averages,” I managed 30.1 mpg on a long highway trip – on the required premium-grade fuel – which beat the EPA highway estimate. One other point of note: That same trip (and a few bumps) showed the S3 to be a fairly quiet, comfortable cruiser with a rock-solid feel.

What premium compacts tend to offer over regular ones are stronger engines, nicer materials, higher levels of equipment, and – not insignificantly – a more prestigious brand name. And particularly since the only “regular” compacts that offer all-wheel drive and this level of performance are the aforementioned Volkswagen Golf R along with the Ford Focus RS and Subaru Impreza WRX STI – the latter two starting at more than $36,000 and only offering a manual transmission – going down-market doesn’t bring a huge cost savings. So while it’s hard to look at a $40,000+ car as a bargain, the S3 isn’t really the extravagance it may initially seem.

Though hardly cheap, the S3 is a prestigious performance sedan in a pint-size package.