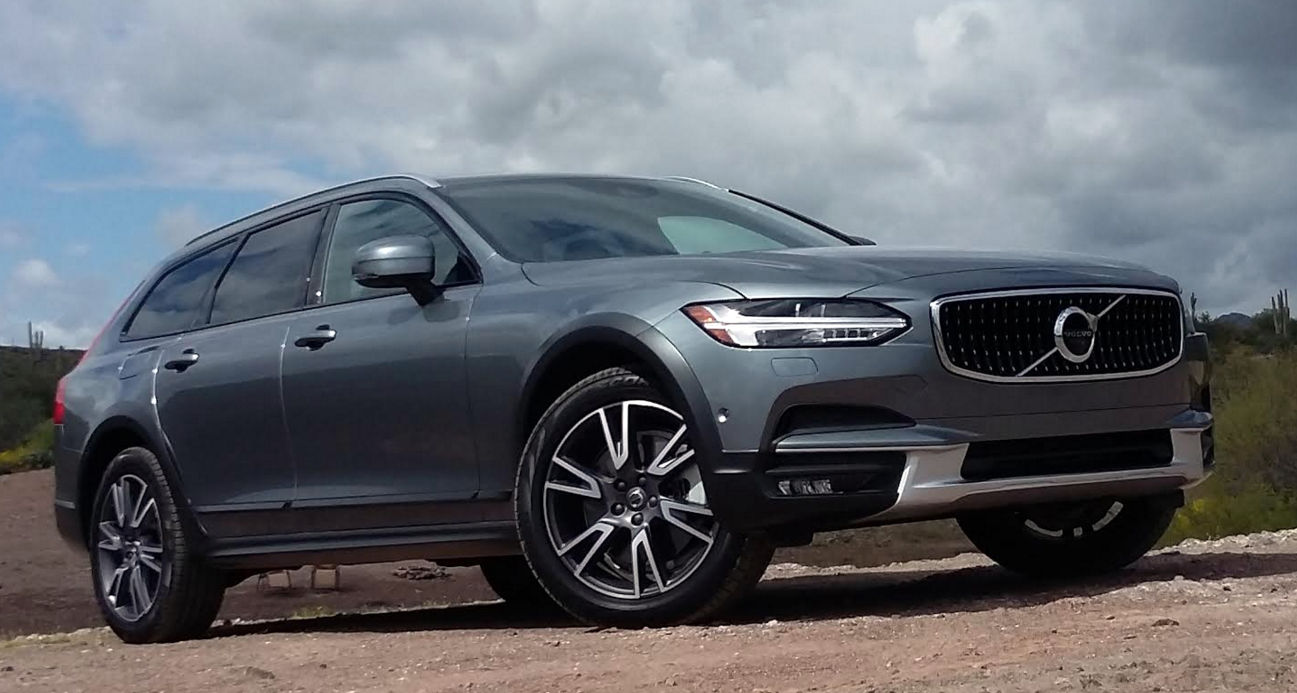 Despite their current popularity, it has come to my attention that some people just don’t like SUVs. Even when branded with the cuter “crossover” tag, they strike some as too boxy, too tall … and too common.

Yet it’s really hard to discount a crossover’s utility. That huge open cavern in back makes for great cargo space, and the higher ride height not only clears deep snow better, it also makes it easier to get in and out and see over traffic.

Setting the V90 Cross Country apart from its V90 wagon sibling are SUV-like fender flares and an extra 2.3 inches of ride height.

But when you get to midsize crossovers, that height might be a bit too much. And it’s hard to argue that a car is just more … “stately.”

While Subaru’s famed Outback can rightfully take credit for the idea of raising a standard station wagon to greater heights (so to speak), Volvo has also been a big champion of the concept. And now the Swedish company has applied the “raised wagon” formula to its top-of-the-line 90 Series.

Earlier this year, Volvo introduced the V90, a station-wagon counterpart to the all-new S90 sedan that debuted for 2017. And now it adds to the line with the raised V90 Cross Country.

In a way, the V90 Cross Country is a bit of a “crossover” itself. Volvo says it bridges the gap between the V90 wagon and XC90 SUV, though its starting price of $56,295 including destination is higher than either one. But the V90 Cross Country comes standard with all-wheel drive and the 316-horsepower 2.0-liter turbocharged and supercharged 4-cylinder engine (designated “T6”) that’s optional on the others, and when they are so equipped, the V90 is a bit more, the XC90 a bit less. Volvo quotes a strong 6.0-second 0-60 time and a 3500-lb towing capacity, while the EPA rates it at 22 city/30 highway/25 combined.

Interiors are very nicely appointed, and can be had in black, two-tone light grey (shown), or two-tone tan.

The most notable difference between the V90 Cross Country and the V90 wagon on which it’s based is the ride height. The Cross Country sits 2.3 inches higher, giving it 8.3 inches of total ground clearance. (That compares to 9.4 inches for the XC90 SUV, but the Cross Country still has impressive clearance for a car.) Also differentiating it are wheel-arch moldings (either black or body color), black window trim, and unique grille textures. Inside, it has black-tinted walnut trim rather than the “natural” fitted to the V90.

While the Cross Country’s 54 cubic feet of storage space (with the rear seat backs folded down) is large and usable, it pales next to the XC90’s 85 cubic feet. So big points to the SUV here. However, Volvo points out that the Cross Country’s roof is nine inches lower, making it easier to lift things – such as a bicycle – onto the roof racks.

If you’ve decided on a premium midsize wagon (rather than an SUV), the V90 Cross Country comes off impressively well. Compared to other “luxury brand” rivals, it’s a relative bargain, and aside from a control layout that can be rather confusing at first (the same can be said for most others of its ilk) and the fact that the tilt/telescopic steering wheel is manually operated (which means its position can’t be programmed into the driver-seat/mirror memory settings), we really couldn’t find much to complain about.

The V90 Cross Country is offered in one trim level with two option packages and a number of stand-alone options.

Most items you’d want are standard. Included in the $1950 Convenience Package are a 360-degree Surround View Camera, park assist (where the car will park itself in either a perpendicular or parallel parking space), heated windshield-washer nozzles, Homelink transmitter, digital compass, and a grocery-bag partition in the cargo area. The $4500 Luxury Package (which also requires the purchase of one of four special paint colors for $595) brings front-seat power-adjustable side support and cushion extension, front-seat backrest massage, 4-zone climate control w/glovebox cooling, and heated rear seats. Notable among its individual options are integrated rear-seat child booster seats (not available with the Luxury Package), a head-up display, Bowers & Wilkins audio system, air suspension, rear-seat DVD entertainment system, and a host of roof racks and cargo-area accessories. 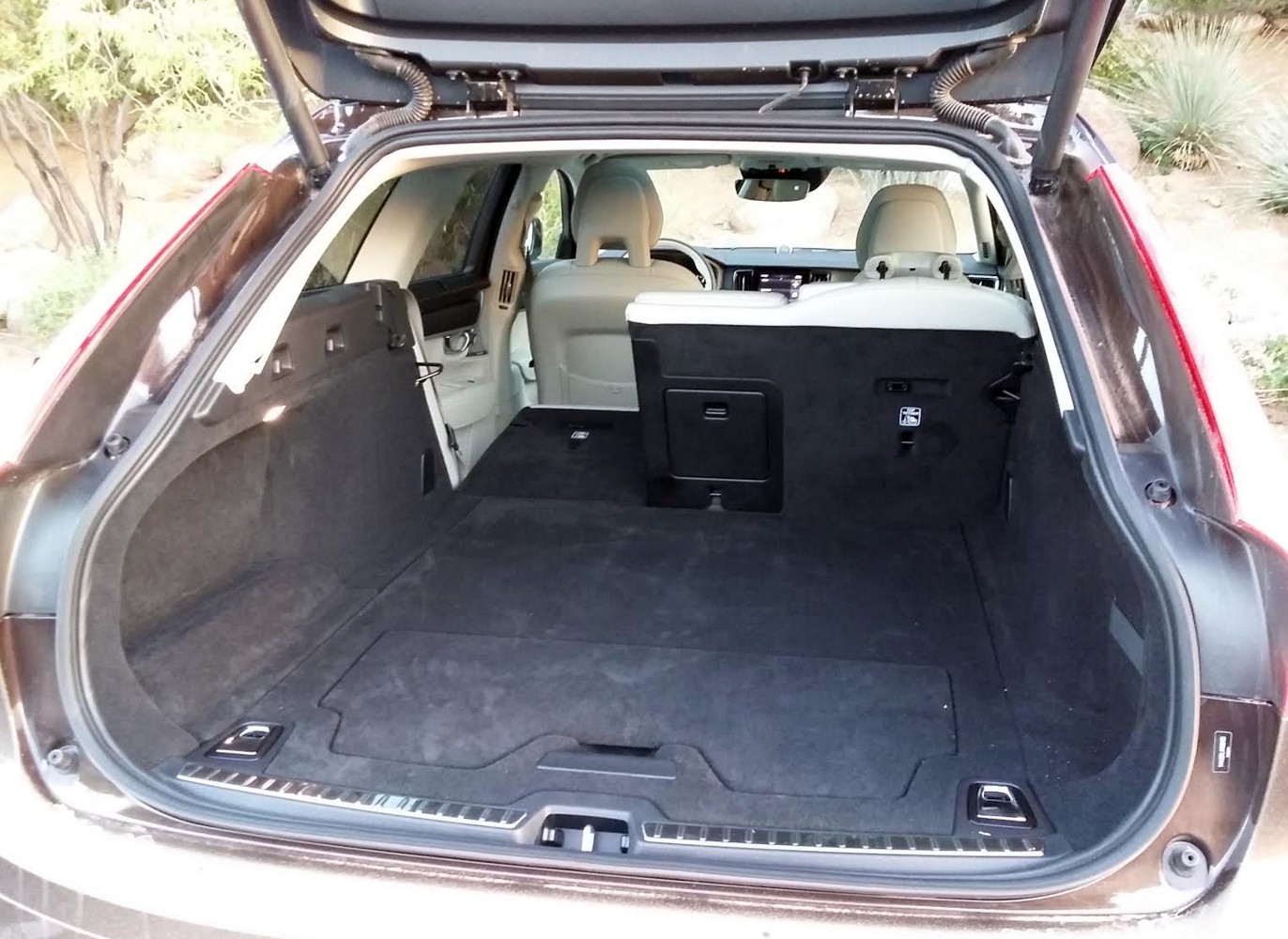 While not as cavernous as that of a midsize SUV, the V90 Cross Country’s cargo area will still hold plenty of stuff.

In most ways, our impressions of the S90 sedan hold for the V90 Cross Country, though there are, of course, some differences. The biggest (in more ways than one) is in cargo room. There’s an impressive amount of space behind the rear seat, and it includes wall indents at the back for holding golf clubs sideways. Fold the rear seat backs and they rest flush with the cargo floor, making for an even longer load area, and there’s a bit of extra storage under the floor. Roof rails and a power liftgate are standard; the Convenience Package adds a handy flip-up partition that keeps items from rolling forward. Cabin storage space is fairly good, highlighted by a couple of handy console bins and another to the lower left of the steering wheel. Visibility is good to the left front and rear corners (the latter aided by the standard power-folding rear headrests), but less so to the right front due to the angle of the roof pillar. Depending on front-seat position, it’s fair to rather poor over the driver’s left shoulder, especially for shorter folks. A panoramic moonroof is standard. 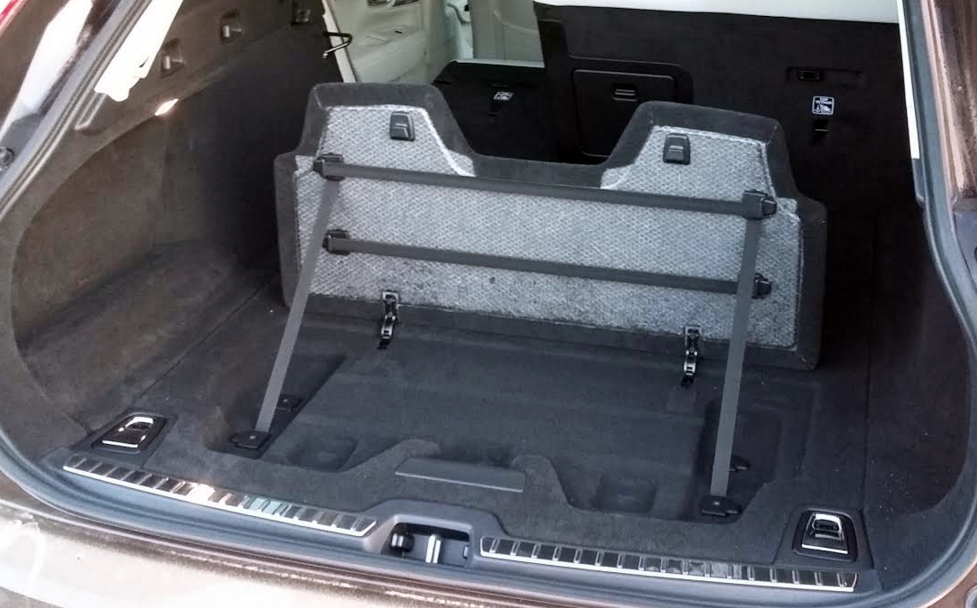 Optional is a handy pop-up divider that prevents small items from rolling forward.

There’s good rather than great front headroom and legroom, and tall folks might find it a little tricky to get out the door opening. Adults up to about 6 feet tall should fit in back, though legroom will get tight if the seat ahead is moved fully rearward. Optional (and rare) are center and outboard child booster seats. 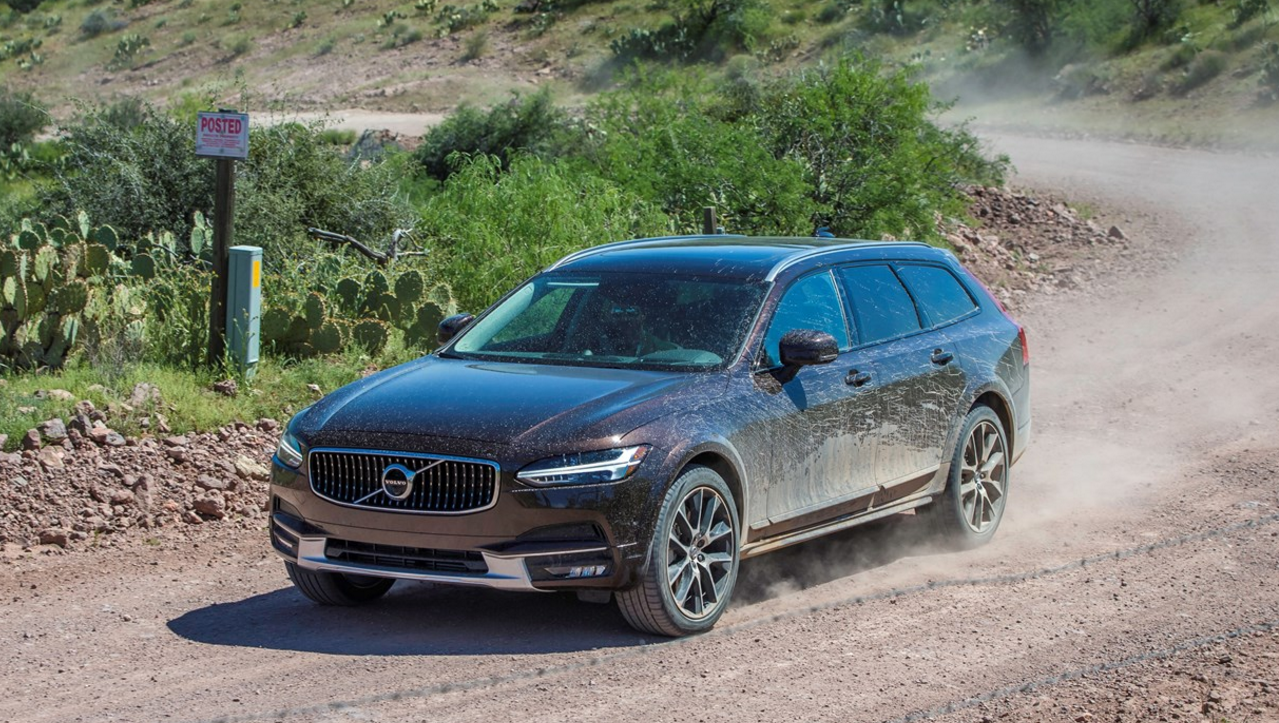 Our Arizona test route included several miles of rough gravel roads, and here, the V90 Cross Country really showed its stuff. Models tested over this stretch were fitted with 20-inch wheels (in place of standard 19s) and optional air suspension ($1200), and they handled the bumps with supple, composed control. Very impressive. There’s also an Off-Road setting (in addition to Comfort, Eco, and Dynamic) that includes Hill Descent Control. 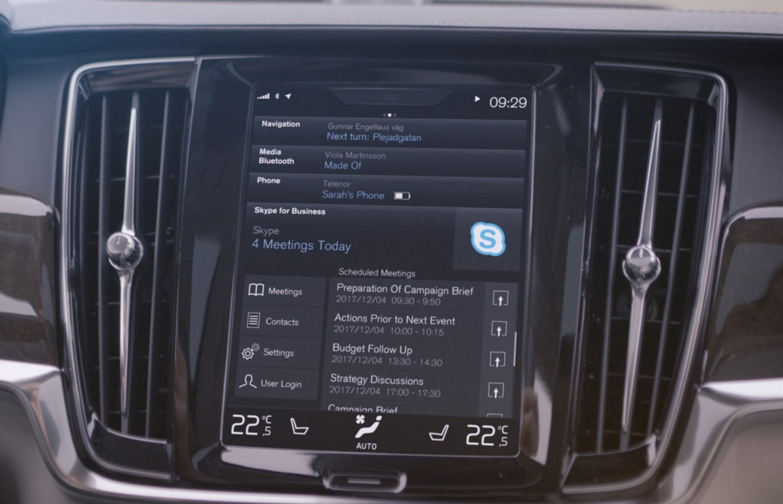 The huge center touchscreen handles most functions, but it helps if you know that there are three panels (accessible by swiping the screen right or left like a smartphone) and that the unmarked “Home” button at the bottom will bring you back to the center one.

If there’s a questionable element to the V90 Cross Country – and this applies to other V90 and S90 models as well – it’s the control layout that governs audio, climate, navigation, and phone settings. Save for a volume knob, seek buttons, and an unlabeled “Home” button (odd, since those in most other vehicles have an outline of a house on them), everything is done through the huge 12.3-inch touchscreen on one of three “panels.” The main panel handles most functions, but for others, you have to swipe the screen right or left to get to the right one – and then you often have to drill down through some layers. While it’s not the most cumbersome system we’ve encountered, newbies aren’t going to figure out its nuances without some concentrated study – something you really should do before you attempt to drive the car.

There’s an element in the car culture – and this includes many journalists – who have always felt station wagons were “cool,” even decades ago when many others thought they were anything but. Yet “Avants,” “Tourings,” “Estates,” and “Shooting-brakes” have long held appeal overseas, and by any name, the V90 Cross Country stands as a great example of the breed.

For those who think cars are more stately than SUVs — or simply don’t want to be seen as following a growing herd — the V90 Cross Country makes for a striking, practical, upscale alternative.