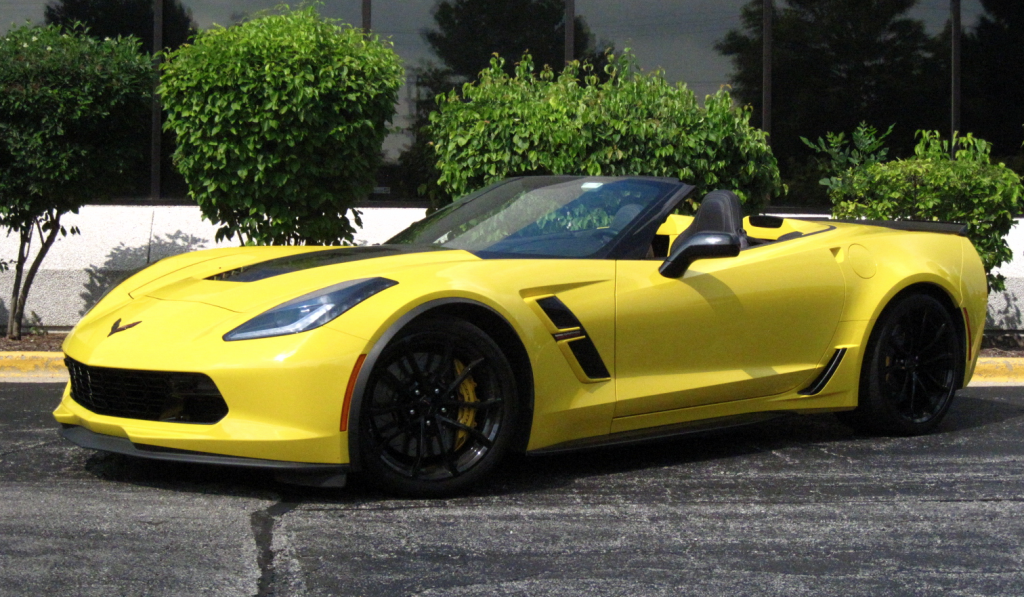 The good: Strong value in the class

The not so good: Fuel economy, cabin space

We wish we could tell you something that you don’t already know about today’s Chevrolet Corvette. You know it’s fast. You know it’s capable on road. You may know it’s quite comfortable. You certainly know it’s sexy.

Know this, then: When it comes to the 2017 Corvette, no news is good news. Chevy’s legendary 2-seater continues all those virtues in the fourth model year of its “C7” generation. 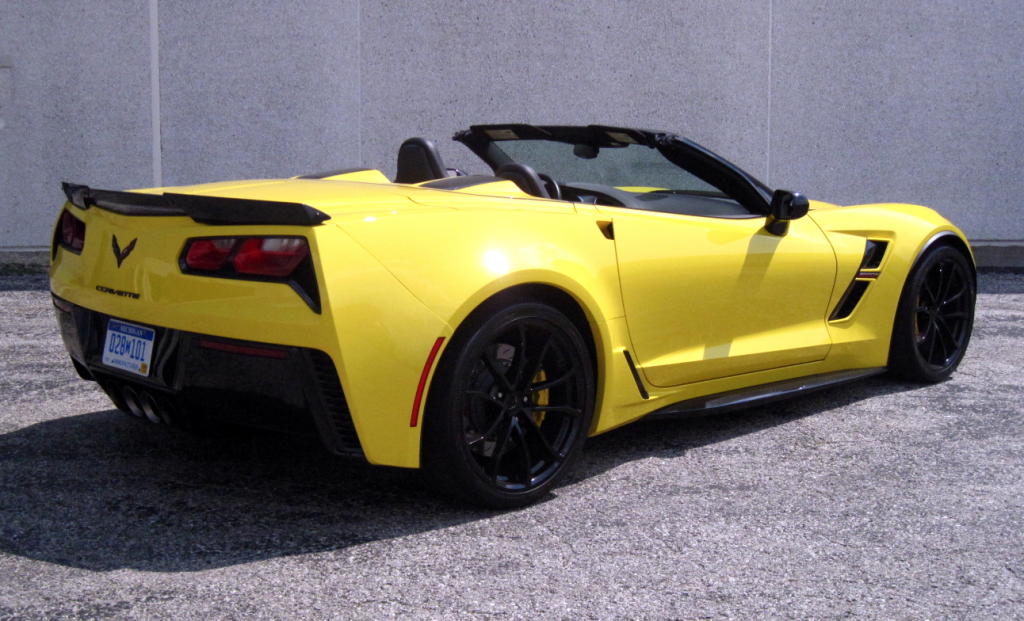 The Grand Sport models fill a key spot in the Corvette lineup; they combine the styling and handling upgrades of the line-topping 650-hp Z06 with the less powerful (and less expensive) powertrain of the standard Corvette.

That said, “America’s sports car”—Consumer Guide®’s “Best Buy” in the premium sporty performance category—isn’t completely static for ’17. The persistent need to give car shoppers something to pique their interest led Chevrolet to revive the Grand Sport, an on-again/off-again member of the Corvette family. CG editors had the chance to drive the convertible version of the Grand Sport, a model created from a mix of Corvette components that adds up to a compelling choice for performance-car customers. 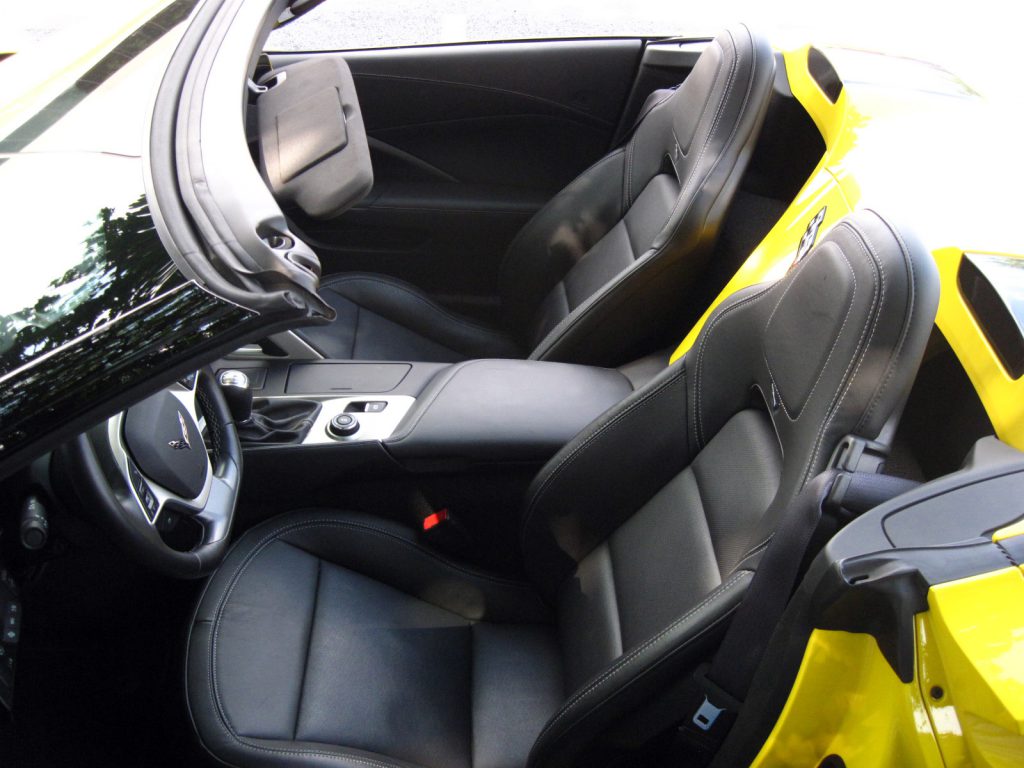 The Corvette convertible’s cockpit is extra-cozy for big and tall occupants–particularly with the top up.

The Grand Sport starts with the 6.2-liter pushrod V8 standard in the base Corvette Stingray but throws in the otherwise-optional “free flow” dual-mode exhaust system. With it, the LT1 engine makes 460 horsepower and 465 lb-ft of torque, versus 455 and 460, respectively, without it. The engine also gains dry-sump oiling from the Z51 performance option package. Then the Grand Sport grabs suspension components and aerodynamic body elements from the mighty, line-topping Z06. The GS tops things off with its own alloy-wheel design for the differently sized front and rear wheels. (Not only are the rims two inches wider in back but diameters are staggered too: 19 inches in front; 20 inches in back.)

Throttle response from the LT1 is immediate and taps into a deep well of power that flows freely when the driver keeps his right foot down. Two days of commuting in the manual-transmission test car gave this reviewer limited license to experience that, but in an earlier drive he took at a media program at the Indianapolis Motor Speedway, an automatic-transmission coupe showed how effortlessly the Grand Sport can develop and maintain speed. Zero-to-60-mph times are reported to be just less than four seconds. Twisting the console mounted driving-mode selector from “Eco” through “Touring” and on to “Sport” and “Track” conjures a more virile exhaust note. Even then it mellows out pleasantly at idle.

The Corvette’s cabin might not reach the luxury standards of its European competitors, but it’s still a very nice place to be. Shifting the 7-speed manual transmission requires a precise hand when working the higher gears.

The GS’s 7-speed gearbox has racier ratios from the Z51 option. Active rev-matching for downshifts can be switched on or off by steering-wheel paddles. (The alternative automatic is an 8-speed unit with paddle shifters.) Short throws make for quick shifts but they require a firm hand, which this driver found a little easy to overdo when working the higher gears in the gates off to the right. Put a little too much muscle behind a 4-5 upshift and you might find yourself in seventh gear instead. The firm and nicely weighted clutch is a pleasure to use and doesn’t get wearying in stop-and-go traffic—just one of the things that makes the Grand Sport a high-performance car that’s still livable for regular use. 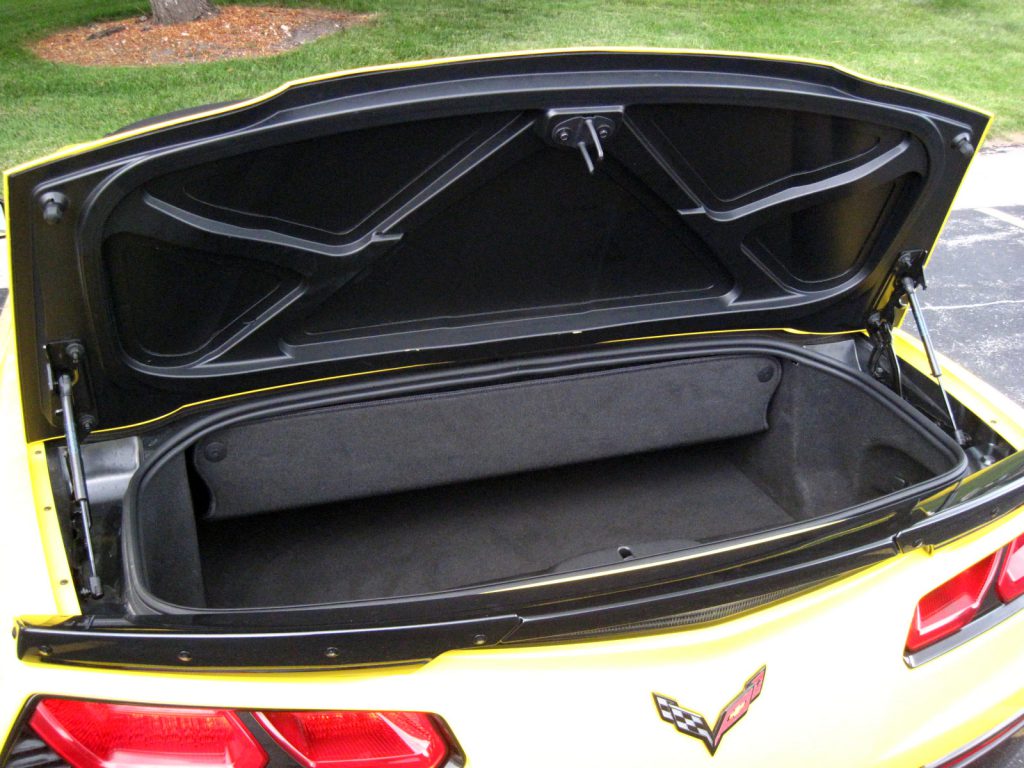 The Corvette convertible’s 10 cubic feet of trunk space is stingy by most standards, but not bad for a two-seat ragtop sports car.

Another thing should be decent fuel mileage relative to the performance. The LT1 with manual trans is rated by the EPA for 16 mpg in city driving, 25 mpg on the highway, and 19 combined. The engine is designed to run on four cylinders in low-stress situations when in Eco ode, and the manual gearbox employs the sometimes-annoying “skip shift,” a first-to-fourth upshift when the car is being driven slowly. However, in a 120.5-mile stint that was 59 percent city-type driving, this driver got just 15.66 mpg—even with a lot of higher-gear use in expressway cruising. Chevy says the Grand Sport can take regular gas but premium fuel is recommended.

The Z06 suspension with adaptable Magnetic Ride Control dampers, grippy standard “summer” tires, and bigger brakes than on the base Stingray imparts an excellent sense of control. Steering is extremely responsive and cornering doesn’t seem to have a word for “roll” in its vocabulary, yet ride quality confounds the usual performance-car expectations by being unexpectedly comfortable. Unless you’re entered in the World Pot Hole Championships, you could drive the Grand Sport all day without feeling beaten up at the end but still know you were connected to the road.

Inside, driver and passenger are snuggly held by leather-trimmed bucket seats with 8-way power adjustment that require a bit of a drop to reach. The driver grips a flat-bottom leather-wrapped steering wheel attached to a power-adjustable steering column. The fabric top raises and lowers briskly at the touch of a dash button. With it up, headroom will be tight for taller drivers. Trim top dimensions don’t leave much of a blind spot in over-the-shoulder vision, but the straight-back view is limited through the short rear window.

Any Corvette convertible takes a hit in trunk capacity, offering just 10 cubic feet of room under a short, hatchlike lid. Passengers will be able to stash parcels or maybe a gym bag in a space behind each seat back. The limits of a small glove box and shallow console box for personal-item storage are somewhat offset by a bin behind the Chevy MyLink infotainment-system screen, which retracts. Door pockets and a pair of covered cup holders in the console are included too.

Additional standard comfort and convenience items are dual-zone climate control, a driver-information center within the highly legible gauge cluster, and keyless entry and starting. Connectivity features start with MyLink and its 8-inch touchscreen, satellite radio, Bluetooth streaming, Apple CarPlay and Android Auto smartphone compatibility, and a 4G LTE WiFi hotspot. The MyLink screen throws a lot at you visually, and inputting audio settings can take some time, but thumb buttons on the steering wheel and very effective voice controls make it easier to get to what you want.

The Grand Sport convertible starts at $69,450, which is $5000 more than a Stingray ragtop with Z51 gear, but a cool $14,000 less than an open Z06. However, CG’s test car hit $79,480 with delivery and options that included the extensive 2LT package (including a head-up display), performance-data and video recorder, and several cosmetic features like Corvette Racing Yellow paint. Compared to other world-class sports cars, the Corvette remains very attainable—even the GS, especially if buyers can hold the line on extras. But then we bet you already knew that, too.