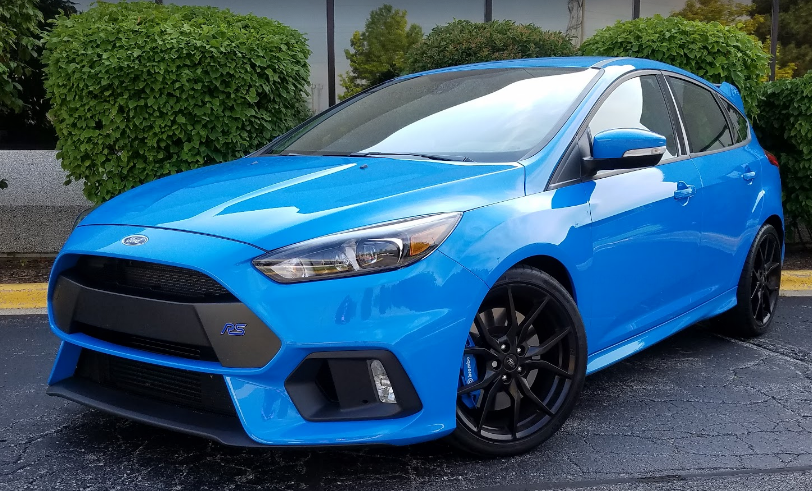 The good: Passenger and cargo room (for a performance car)

The not so good: Ride, infotainment controls

Along with the rest of America’s auto-enthusiast world, we’ve been eagerly awaiting the arrival of Ford’s legendary, rally-inspired Focus RS on U.S. soil. And it’s been quite a wait. 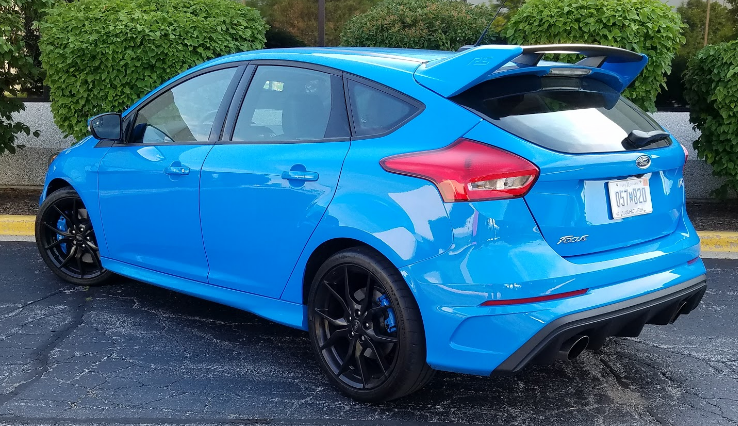 Subtle, it’s not. But the Focus RS boasts more than enough performance to back up its “boy racer” looks.

Europe has long enjoyed its own version of the hot-rodded RS, dangling it in front of salivating American enthusiasts like a non-exported gourmet sausage. But it finally crossed the pond for 2016, and we finally got our first drive in one.

So what’s the big deal?

Well, it starts with power. While Ford has long offered the sporty ST in its Focus compact-car lineup, that model uses a turbocharger to up the horsepower ante of the base model’s 160 to “just” 252. And it’s still front-wheel drive, which struggles to put all those ponies to the pavement.

With the RS, Ford dials up the engine’s tuning to deliver a rousing 350 horsepower, and also adds all-wheel drive to make sure none of it goes to waste. Toward the same cause, performance-oriented suspension and tires are included, as are Brembo-brand brakes and a host of other sporting features, along with the requisite distinctive badging. 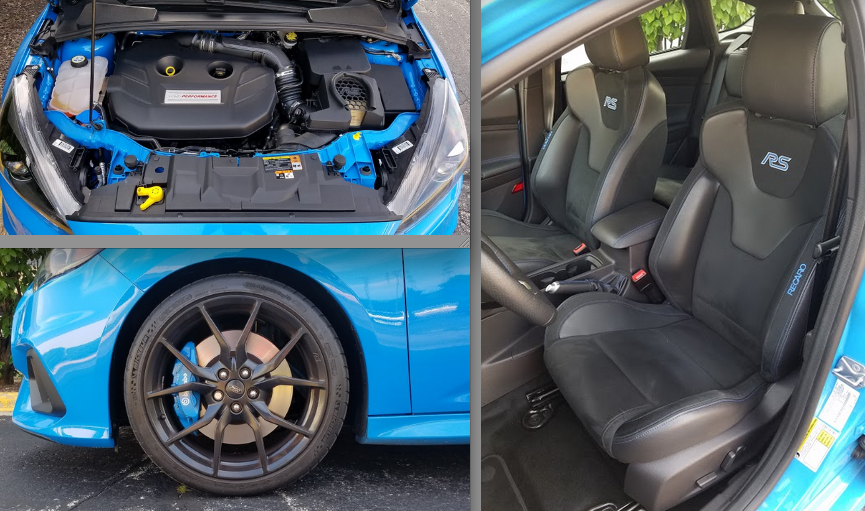 The heart(s) of the matter. Powering the RS is a 350-horsepower turbocharged 2.3-liter four, joined in its pursuit of performance by cosseting Recaro-brand seats, sport-oriented suspension and tires (the latter special track-oriented Michelin Cup 2s on 19-inch alloys that came courtesy of the $1900 Equipment Group 600A), and — thankfully — strong Brembo-brand brakes.

As might be expected, none of this comes cheap. Moving up from the ST to the RS requires adding $11,000 to the tally, as the RS sports a near-$37,000 price of entry — and that’s if you can find a dealer willing to let one go for list price. But what you get for that sum is an extremely quick and capable car that also exhibits a fair degree of practicality.

While certainly strong, full-throttle acceleration is not quite as “explosive” as one might expect. While that’s perhaps a bit of a disappointment from a thrill-seeker’s standpoint, it does serve to make the RS more tractable in traffic. Further aiding that cause are a light, easily modulated clutch and positive if slightly notchy shift feel.

Considering the aggressive suspension and tires — which do, indeed, provide seriously sporty if not quite racer-like handling — the RS doesn’t rattle your teeth over bumps. That’s not to say it just ignores them, but the reaction is rarely jolting, another dynamic element that helps make the RS an acceptable every-day transportation tool.

Other elements that make the RS “practical” are fairly good visibility, a reasonable degree of interior storage, and good though not great interior room, as legroom in back virtually disappears behind a tall front-seater. Cargo space is a mixed bag; yes, you have the utility of a hatchback, but the space is rather narrow, and the folded rear seat backs rest about three inches below the level of the cargo floor and not nearly flat. On the plus side, there’s a good amount of under-floor storage, something we find very useful.

Less useful, however, is the infotainment layout. Although the audio system includes a volume knob and tuning “flipper,” many actions are done through the touchscreen, which is set deep into the dashboard, making it awkward to access and a long reach for some. Climate controls are better, with rotary temperature knobs and individual mode buttons (which allow you to choose upper, mid, and lower outlets all at once — a rarity), though fan speed is set via a less-convenient repetitive-step pushbutton.

On the more practical side, the RS features a livable — if not optimally convenient — cockpit, along with usable — if not especially versatile — cargo space.

With the RS package come Recaro-brand bucket seats, which can be a mixed blessing. Though comfortable — and quite “retaining” during hard cornering — some may find the tall, narrow seat-cushion bolsters clinch their thighs a bit too tightly.

What it all amounts to is that — when it comes to hyper-performance all-wheel-drive hatchbacks — the RS is not only a welcome addition to the genre, but may well set the performance bar others will strive to meet. Although your wallet (or perhaps a significant other) may have to be convinced, it’s a car that can appeal equally to your sporting and practical senses, and yes … it was well worth the wait.

Technically, our Ford Focus RS tester was a 2016 model, but the RS came out very late in the model year and is carried over unchanged for 2017. And, the 2018 model year is already the end of the road for this all-wheel-drive, manual-only super hatchback; Ford is sending off the Focus RS with a run of 1500 specially trimmed limited-edition models that come standard with a mechanical limited-slip differential and the content of the previously optional RS2 Package (heated exterior mirrors, heated front seats, heated steering wheel, and voice-activated navigation system).

We’re sorry to see the Focus RS leave so soon, but we’re happy that Ford saw fit to bring it to our shores in the first place. It’s an unfiltered taste of Ford Motor Company’s global performance heritage and presence. It’s a snarling, satisfying, more-powerful rival to the Subaru WRX STI, and a brasher alternative to the more subdued Volkswagen Golf R. And, its short lifespan on our shores means that the Focus RS will likely remain coveted by a select group of enthusiast drivers for a long time to come.

If — like many other enthusiasts — you’ve been waiting patiently for the hot RS to hit the U.S. market, you may not want to wait much longer. Ford has announced that the 2018 version will be the last, at least of this generation.