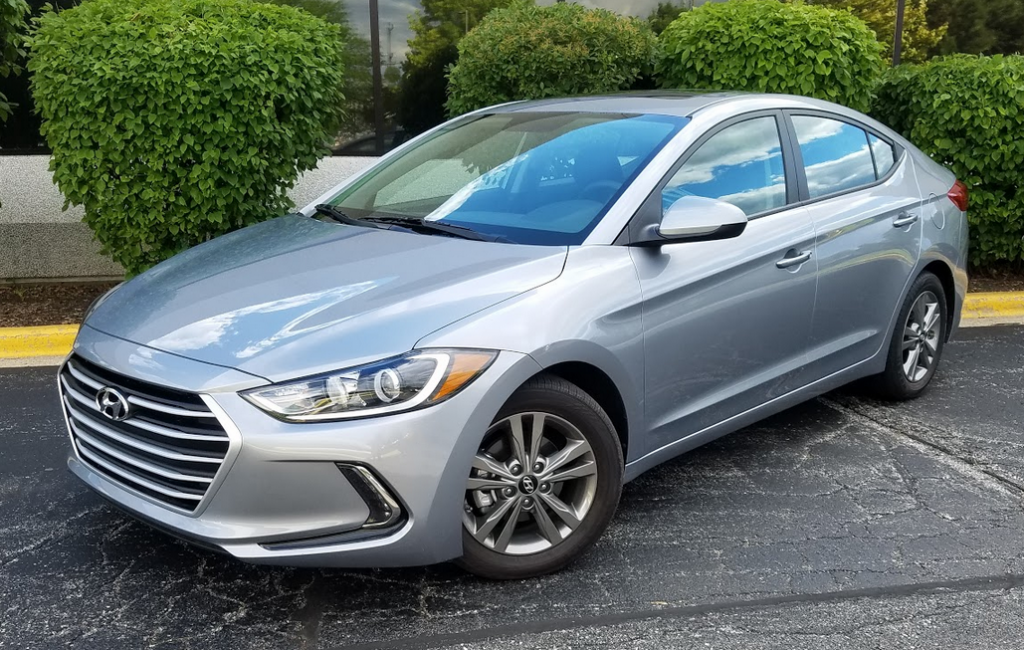 The great: Excellent value and level of features for the money

The not so good: Some middling interior materials

If you’re one of those supposedly ever-rarer purchasers of compact sedans, Hyundai seemingly still wants your business. Its wholly redesigned 2017 Elantra comes a lot of ways in hopes that one of them will be right for your needs. Moving up the line, there’s the budget-priced SE with a starting tab solidly below $20,000, the fuel-conserving Eco, the spunky 201-horsepower Sport, and the dressier and convenience-laden Limited.

Forgetting for a moment the Eco and Sport, each with its own distinct engine and specialized role, there’s plenty of room pricewise for something between the similarly powered SE and Limited. That something exists: the Elantra Value Edition. 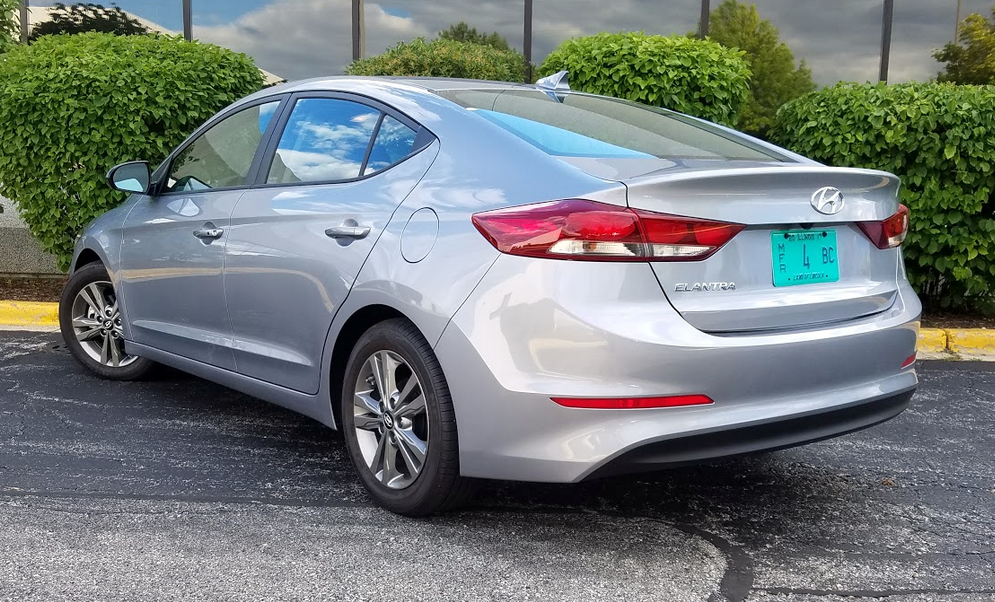 Pegged at a starting price of $20,250, the Value Edition slots exactly between an SE with automatic transmission (a $1000 option on the base car) and the Limited—it’s $2100 more expensive than the former and $2100 cheaper than the latter. Indeed, for the most part, the Value Edition comes across as an SE to which both of its available option packages have been added. As such, Value Edition buyers automatically get audio displayed on a 7-inch touchscreen, Android Auto/Apple CarPlay capability, Bluetooth hands-free phone system, a 3.5-inch thin-film-transistor vehicle-information display, rearview camera, blind-spot detection with rear cross-traffic alert and lane-change assist, proximity-key entry, push-button starting, dual-zone automatic air conditioning, one-touch auto-up driver’s-side window, leather-wrapped steering wheel and shifter knob, steering-wheel-mounted audio and cruise-control buttons, heated front seats, illuminated visor mirrors, sun-visor extensions, a sliding center armrest, and a net pouch on the back of the front passenger seat. Exterior touches run to LED daytime running lights, 16-inch alloy wheels on 205/55R16 tires, a hands-free “smart” trunk, heated side mirrors, hood insulation, automatic headlights, and door-handle approach light.

The Elantra’s cabin design isn’t particularly dynamic, and the interior materials are nothing to write home about. However, the control layout is clear and straightforward, and passenger room is class competitive, for the most part.

Additional Value Edition standards that can’t be had even in a fully optioned SE include a power sunroof, HD radio, individual tire-pressure monitoring, a power driver’s seat with power lumbar support, and an auto-dimming rearview mirror with HomeLink universal remote and compass. Even with all this, the Value Edition still lacks things like leather upholstery, a rear-center armrest, Hyundai Blue Link telematics, exterior brightwork, 17-inch wheels, and rear disc brakes that are part of the Limited’s complement of standard gear—though it takes an option package to get the sunroof on the top-trim model, so score one for the Value Edition. 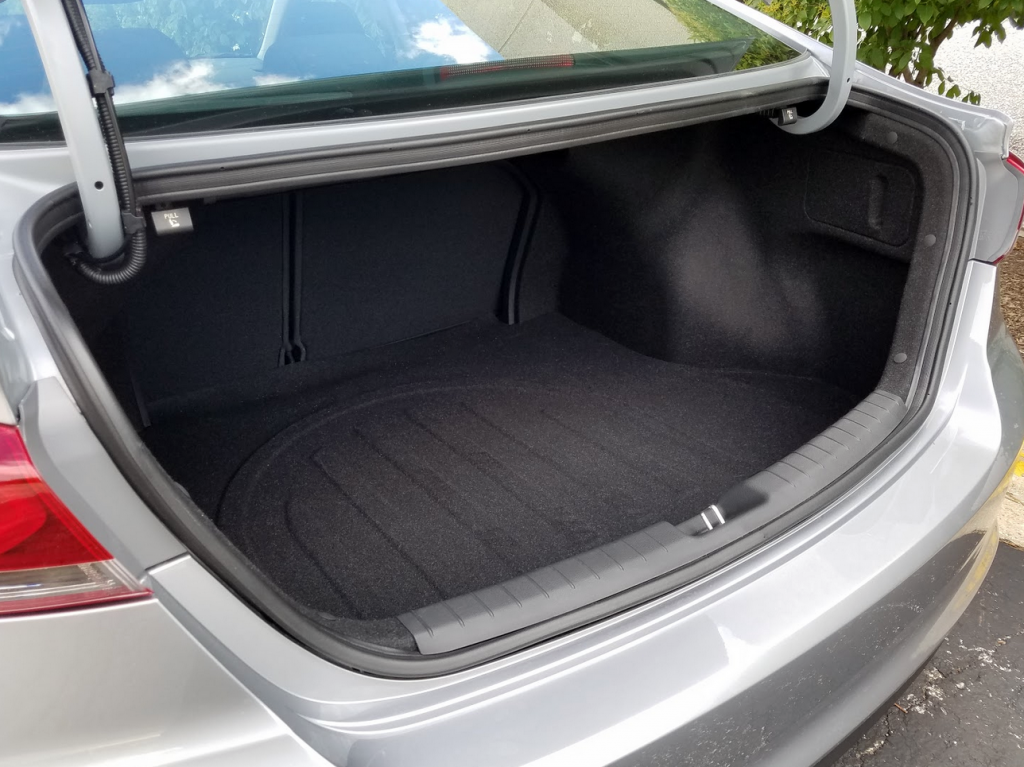 The Elantra’s trunk offers a flat, low floor and a generously sized opening.

Compared to other 2017 Elantras that Consumer Guide® has tested, the Value Edition is closest to the Limited in terms of powertrain performance. Both run with a new 2.0-liter 4-cylinder engine of 147 horsepower and 132 lb-ft of torque, and a 6-speed automatic transmission. Elantras with this engine get around well enough even if it turns a little noisy when pushed, and the automatic trans isn’t the quickest to kick down for added merging or passing power. With “Drive Mode Select”—activated by a button on the console—drivers can adjust throttle response (and steering effort) from “Normal” to “Sport” or “Eco” modes. In anything other than Normal, the impact on acceleration is slight, however. In fact, the engine’s valvetrain is keyed toward heightening fuel economy. EPA ratings for the 2.0-liter with automatic are 28 mpg in city driving, 37 on the highway, and 32 combined. When this reviewer put 229 miles on the car, 60 percent of them in city-type driving, he saw 27.03 mpg—very close to what he got when driving the Limited in an earlier test.

Ride isn’t quite best in class but it still handles most smaller bumps and road cracks well enough to keep from jostling passengers most of the time. Steering behavior is not bad overall, with a steady, predictable amount of understeer when hooking around expressway ramps.

Interior appointments are a little stark—soft or padded surfaces are pretty rare. The Value Edition’s seats have a subtle pattern woven into the cloth upholstery. Seats are supportive with a degree of built-up bolstering in the cushions and seat backs.

All of the new Elantra sedans have easy-to-use audio and climate controls. Personal storage is handled via a sizeable glove box, a smallish rectangular console box, and a covered bin with auxiliary/USB ports and two 12-volt plugs, and the seat-back pouch. Each door has a pocket with a bottle holder. Cup holders for front passengers are set in the middle of the console; in the Value Edition, cup holders for rear occupants slide out of the back of the console.

Rear-seat space is OK if folks on the shorter side are sitting up front but even sub-6-footers can begin to crowd those behind them. Effective adult capacity is four—though a third person may fit across the back in a pinch, thanks to a low, flat-topped floor hump. Headroom is good all around.

For a compact, the Elantra’s trunk space is good. The floor is uniformly flat and liftover is low. Rear seats fold in a 60/40 split, but they do so a few inches above the level of the trunk floor. Further loading complication comes from a bulkhead behind the seats that restricts the threshold between trunk and cabin.

With a set of carpeted floor mats and delivery folded in, CG’s test car came to $21,210. Considering that amount bought a car with much of the best stuff the Elantra has to offer in an improved small-car package, the Value Edition gives budget-conscious shoppers some good reasons to want to buy another sedan.

It’s no thrill machine, but the Hyundai Elantra Value Edition more than lives up to its name. It offers an excellent level of desirable standard features at a price that undercuts most class competitors.