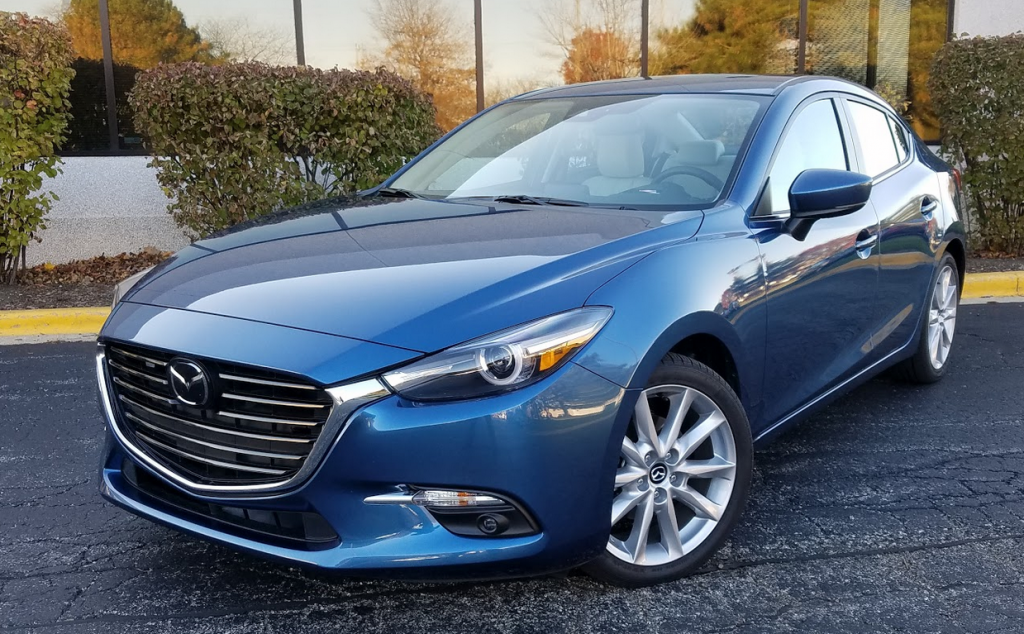 The not so good: Some testers dislike console-mounted infotainment controls

For 2017, the Mazda 3 sees several improvements and newly available features, but the most notable enhancement is one that most drivers won’t consciously recognize: it’s Mazda’s new G-Vectoring Control, a technology feature that improves cornering performance by electronically linking the engine and the steering system. Sensors detect the vehicle’s speed, throttle position, and steering-wheel position. When the steering wheel is turned, the system reduces engine torque by slightly retarding the spark timing, which increases the vertical load on the front tires for better cornering grip and stability. 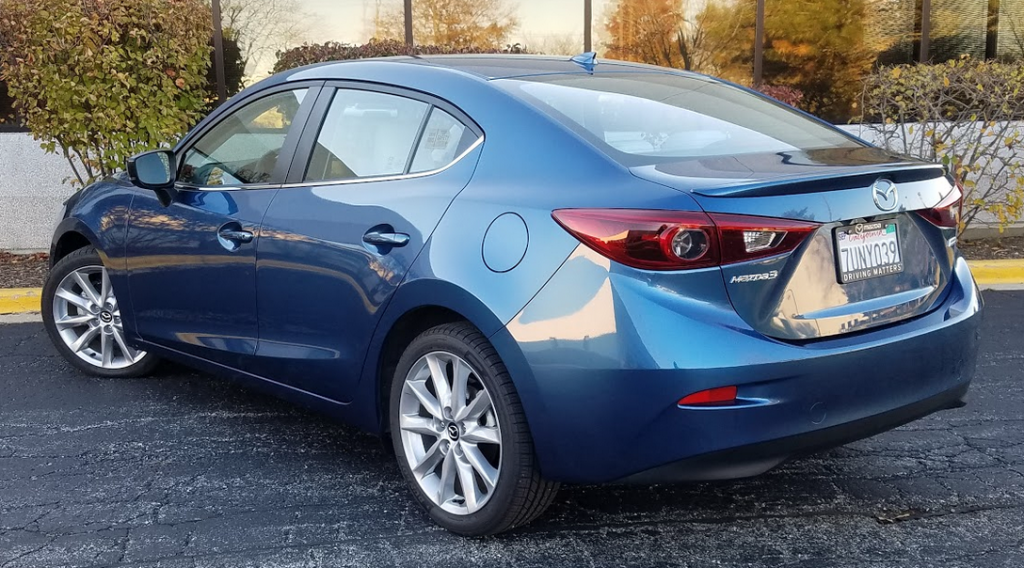 The Mazda 3 is one of the sportier-looking mainstream compact cars, and its driving chararacter matches its looks.

The overall effect is very subtle to the average driver—in fact, you’d probably need to drive a 2016 and a 2017 Mazda 3 back-to-back to feel the difference—but as the following video of a Japanese-market Mazda Atenza wagon shows, cornering performance is smoother and more controlled.

G-Vectoring Control is programmed into the vehicle’s software, so the system is always active—there is no on/off switch. The G-Vectoring Control system also appears on the Mazda 6 for 2017, and Mazda’s ultimate plan is expand the feature to its entire model lineup.

In addition to G-Vectoring Control, the 2017 Mazda 3 gets improved sound insulation, larger door pockets, a sliding center-console cover, an electronic parking brake, and exterior styling revisions that include available LED headlights and taillights. Also newly available are a blind-spot monitor and traffic-sign recognition.

Grand Tourings come standard with a 184-horsepower 2.5-liter 4-cylinder (lesser 3s have a 155-hp 2.0-liter four). Acceleration with the 2.5 is quite quick for a mainstream compact car, and the 6-speed manual transmission in our test was an absolute delight. The shift lever moves smoothly and precisely, and the clutch pedal has a predictable, linear action. 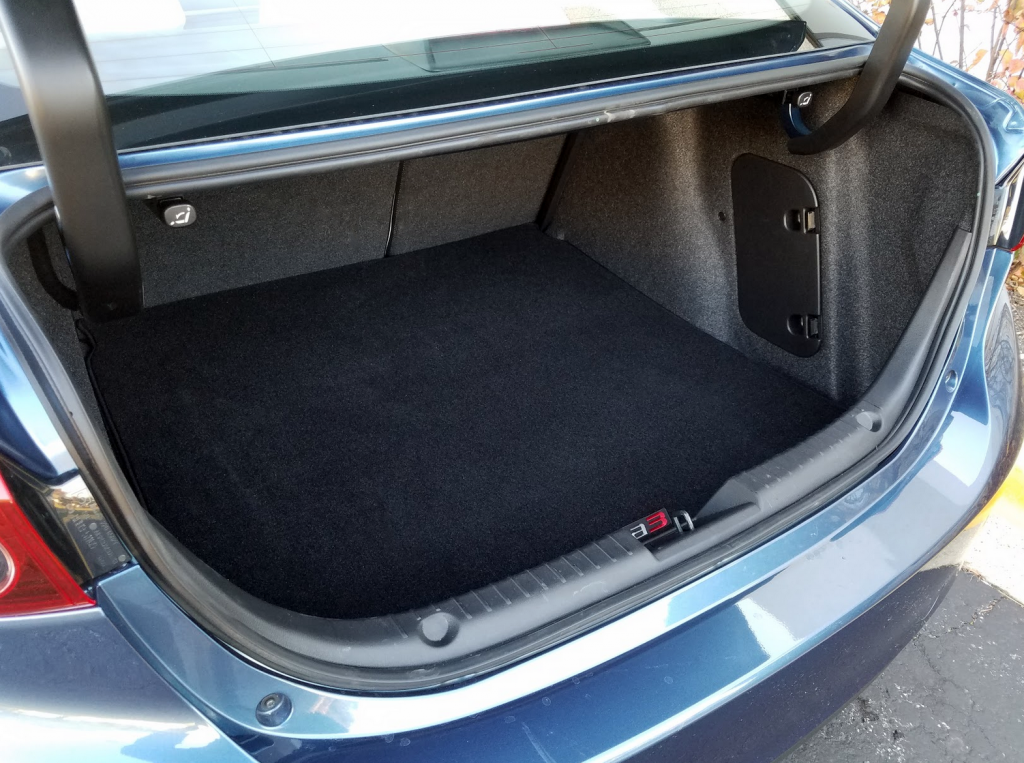 The Mazda 3 sedan’s trunk has a maximum capacity of 12.4 cubic feet, making it a bit less commodious than many class competitors.

The 3 remains one of the best-handling vehicles in its class as well. The steering is crisp and communicative, and the whole car has a lithe, lively feel. Grand Tourings come standard with 18-inch alloy wheels, which ride a bit more stiffly than the 16s on base Sport models but offer commensurately sharper handling. Even with the 18s, we found the 3’s ride quality absorbent enough to be comfortable in everyday commuting.

In Grand Touring form, the Mazda 3’s interior has a convincingly upscale feel. The parchment-colored leather upholstery in our tester looked great, and offered a lot more visual contrast than the all-black interior of the Grand Touring sedan we tested last year. However, we found the head-up display screen that powers up from the top of the dash to be a little gimmicky, and we never did fully acclimate to the console mounted power/volume knob for the audio system.

In fact, Mazda’s whole navigation/infotainment system and its “Commander Control” console-mounted control knob haven’t really been at the top of our lists. Performing certain functions can be tedious, the feature set isn’t particularly robust, and many of the graphics aren’t as crisp or clear as in some class competitors. However, those concerns melt away when you’ve got the 3 on a good curvy road. Even though it’s as practical an everyday driver as any of its compact-car competitors, this is a car made for driving… not for fiddling with infotainment systems.

At its as-tested price of $26,880, our Mazda 3 Grand Touring is right in step price-wise with the top trim levels of most of its class rivals, and our fuel economy average of 34.0 mpg is a step above the numbers we achieved in many of the 3’s direct competitors. For its performance, style, efficiency, and value, the 3 is one of our favorite compact cars.

The Mazda 3 sedan has a swoopy long-hood/short-deck profile, and the hatchback model is similarly rakish. Eighteen-inch alloy wheels are standard on Grand Touring models.