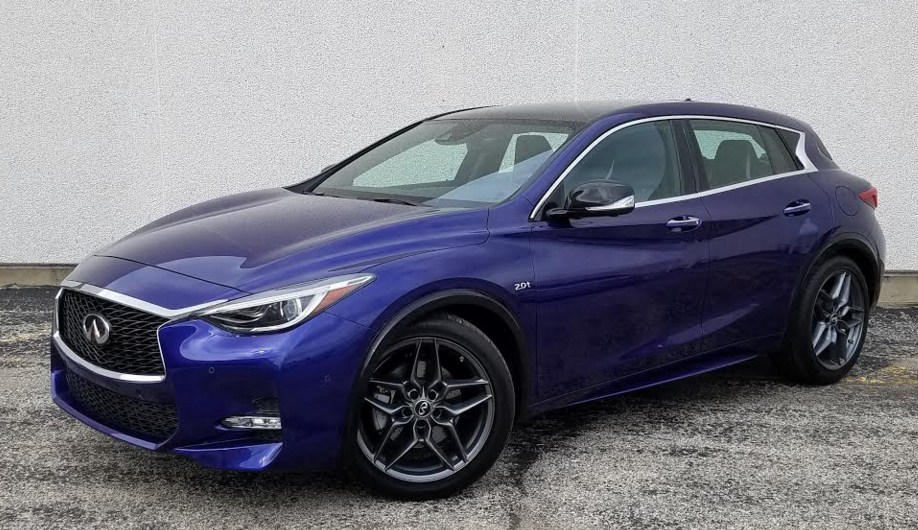 Infiniti adds another entry in the premium-compact-crossover class for 2017. Joining the QX50 is the smaller, sportier QX30, which comes with a turbocharged 4-cylinder engine and either front- or all-wheel drive. Tested was a front-wheel-drive Sport version that started at $37,345 including destination, but several option packages ran the total to more than $43,000.

The not so good: Visibility, transmission performance, interior storage, entry/exit

Although examples can be cited that go back decades, recent – and rather odd – partnerships include the co-development of a sporty coupe sold in virtually identical form as the Subaru BRZ and Scion FR-S, the latter of which will soon be renamed (due to the demise of the Scion brand) the Toyota 86. But the collaboration that brought about the Infiniti QX30 might be even stranger. 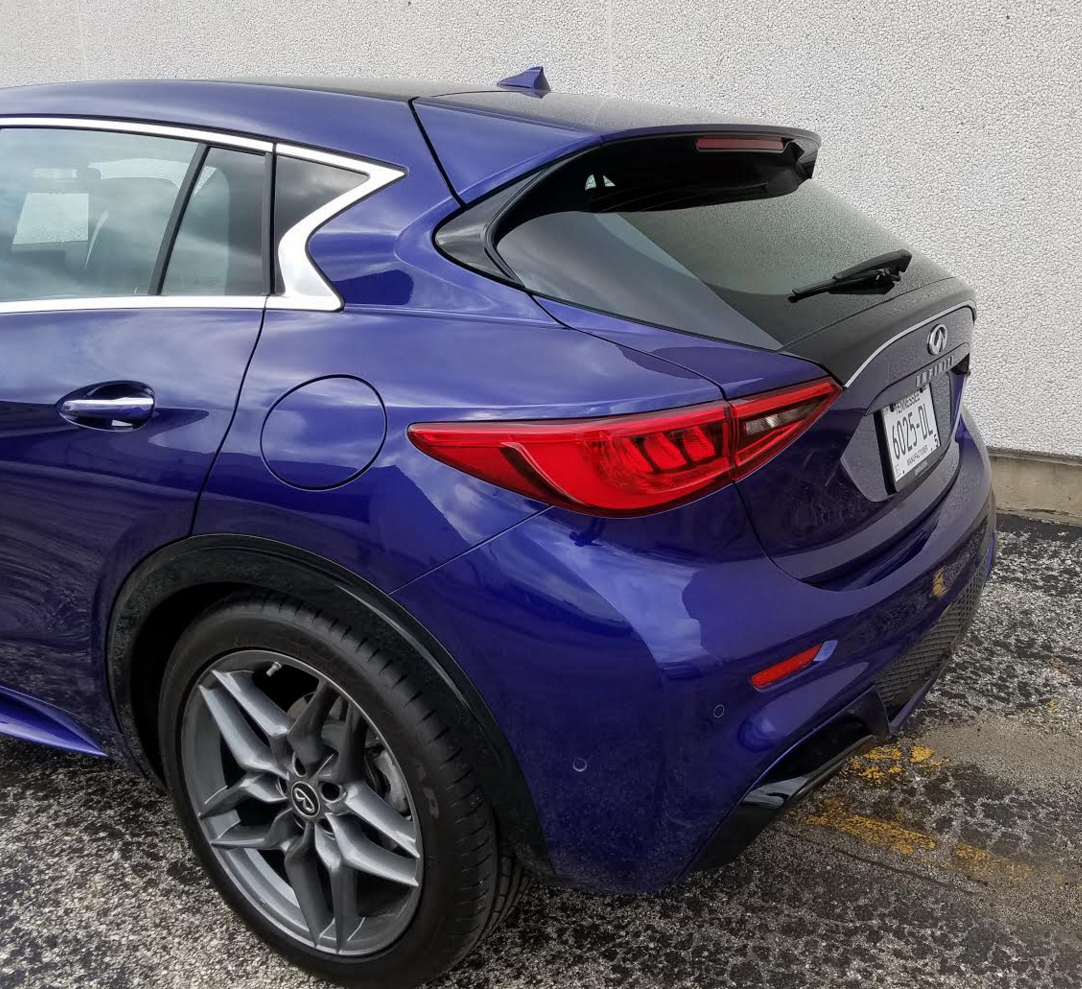 Under the skin, the QX30 is essentially a Mercedes-Benz GLA, a premium compact crossover the German manufacturer introduced for 2015. Although suspension tuning may be different, the powertrain is not: a 208-horsepower 2.0-liter turbo four linked to a 7-speed automated-manual transmission that behaves much like a conventional automatic … though not quite. Interiors mostly differ – the QX30’s adopts a contemporary Infiniti layout – though vestiges of the three-pointed star remain in the door-mounted power-seat controls. Both the GLA and the QX30 are offered with either front- or all-wheel drive, and while most models are priced roughly in parity, the QX30 offers a $31,000 front-drive Base model that’s about $3000 less than the entry-level GLA. Above that in the QX30 lineup are the Luxury, Premium, and Sport, only the Base and Premium being available with all-wheel drive.

What arrived at our offices was a front-drive Sport in “Ink Blue” that started at $37,345 including destination and ended up at $43,195 after adding a few option packages. A sheet of paper advised that it was a pre-production vehicle, so while it was likely very close to what will be found on the showroom floor, it didn’t come with a Monroney (window) sticker. 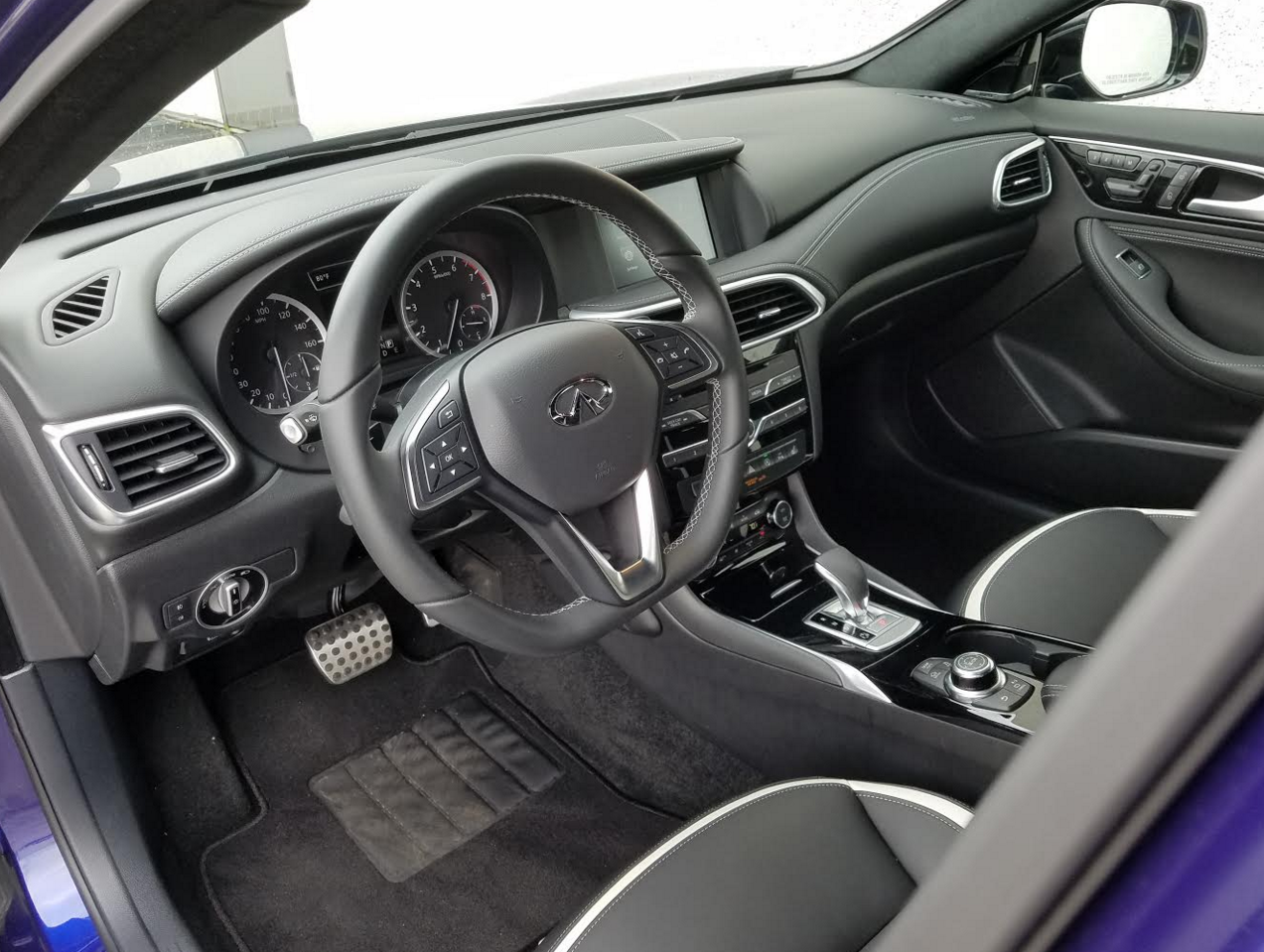 Our tester’s interior was fairly subdued save for white-trimmed seats, but materials fit the vehicle’s “premium class” designation.

Although the “X” in “QX30” would designate this as a crossover/sport-utility vehicle in Infiniti parlance, it really didn’t look the part; it was rather too swoopy and much too low. All-wheel drive versions will correct the latter, but the body lines clearly differentiate it from its Mercedes counterpart, which is smooth (in a “bar of soap” kind of way) and almost boxy by comparison.

The low height and small door openings made one of our taller editors comment that getting in and out was a bit of a chore, though more normal-size drivers didn’t have as much trouble; it’s just not the “slide in and sit” arrangement of most SUVs. By contrast, room was okay once seated, and it was more spacious in back than might be expected, though moving the front seat all the way rearward effectively deleted rear-seat legroom, and the similarly small door opening made it tough to get feet through.

Interior materials at least bordered on premium levels, with padding on the dash top, door tops, and armrests. Piano black and matte silver trim did little to brighten the overall look, though the otherwise-black seats were trimmed in white. Lines mimicked those of the exterior, with lots of sweeping curves.

Visibility is normally an Infiniti strong suit, but not so much here. The front-left roof pillar looks thin from the driver seat due to its angle, but the same angle on the right pillar makes it somewhat wider. Thick pillars at the sides and back block a lot of the view, the latter helped – though not altogether alleviated – by the rearview camera and Around View Monitor.

Infiniti also used to be known for its straightforward, comparatively simple control layout, but those designers have apparently retired (or moved “down” to parent Nissan, which has lately adopted some of that control goodness in its updated products). Still, the QX30’s layout isn’t as bad as in some premium vehicles, though it incorporates what has seemingly become de rigueur in upper-crust cars, the console control knob. At least there is still a conventional volume knob along with some physical (!) station-select buttons, and those on the dash are within easy reach. Less so are the climate controls, which are tucked low and away, and consist of a rotary temperature knob along with less-convenient repetitive-step pushbuttons for fan speed and mode.

Interior storage is rather meager, especially for an SUV, and none of the compartments are very large. There’s a smallish glovebox, small covered forward-console bin with two USB ports, two cupholders, small console box with 12-volt plug and an SD-card slot, and map pockets in the doors.

The cargo area isn’t much better. The area is rather narrow at the back, there’s only a small amount of “informal” storage under the floor (mostly taken up by a speaker and a tire-inflation kit), and though the rear seat backs fold level with the cargo floor and nearly flat – a good thing – they can’t be folded if a front seat is very far rearward (about where a 5’9 driver would set it is the max).

Although the turbo four’s 208-horsepower rating isn’t very impressive, the acceleration it provides is. Nail the gas, and there’s good power from a stop with very little of the dreaded “turbo lag” many such engines suffer. What can cause a bit of lag off the line, however, is the stop/start system. It kills the engine at most stops, and some drivers may find it doesn’t restart it as fast as they’d like. However, you can start the engine “prematurely” by lifting your foot ever so slightly off the brake pedal, and you can deactivate the system by pressing a button on the dash – though that has to be done every time you start the car. 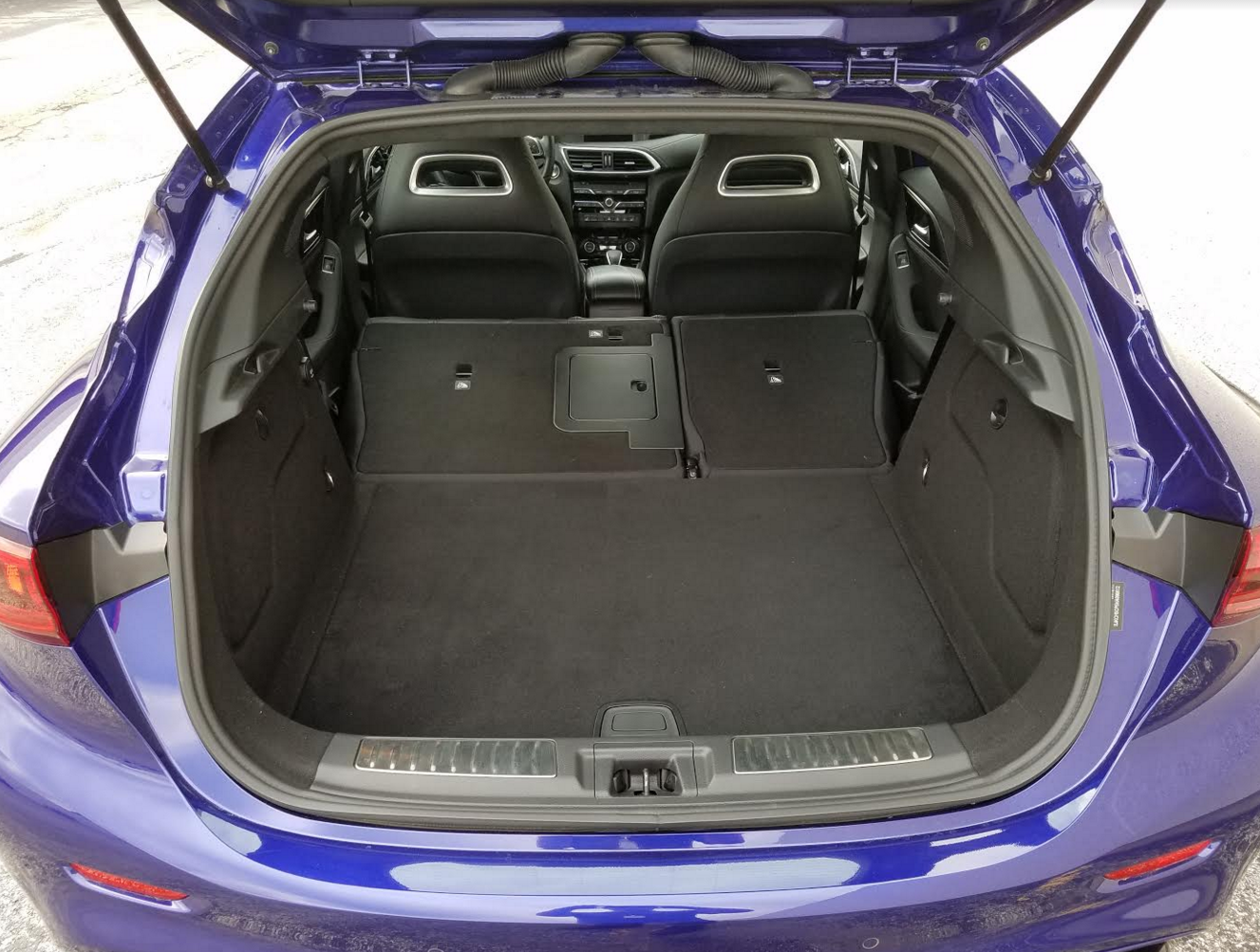 The liftgate opens to a narrow but fairly spacious cargo area, which can be expanded by folding the rear seat backs. The seat backs fold level with the cargo floor and nearly flat, but can’t be folded if the front seat ahead is pushed very far back.

It’s after you’ve launched that things aren’t always copacetic. It’s a little difficult to figure out what the culprit was here – whether an uneven turbo-boost curve or an issue with the transmission – but acceleration wasn’t always as linear as might be expected. In general, automated-manual transmissions are not as smooth in operation as a conventional automatic, but the situation seemed to be a bit exaggerated. On the positive side, the transmission kicked down fairly quickly when the throttle was stabbed at speed, which is not always the case, particularly with automated manuals. We averaged 21.0 mpg on the required premium fuel, though that was in primarily city driving.

Especially considering the lowered suspension and low-profile, run-flat tires, the QX30 was quite composed over bumps, exhibiting a firm but never harsh ride. Steering and handling both had a sporty feel, something the aforementioned suspension and tires – and low overall height – undoubtedly help.

Although Infiniti seems to place the QX30 in the crossover category, the Sport is the least “crossover” model in the lineup, being more of a sporty car than an SUV. So maybe we’re grading it on the wrong scale. (Parent-company Nissan has a similar situation with its little Juke, which has been variously categorized as a sporty car and as a subcompact SUV, even by us.) Viewed as a sporty car, the QX30 Sport offers hatchback versatility and more in the way of features and panache than lower-priced rivals. And though its taller, all-wheel-drive line mates will undoubtedly look more like – and have more of the capability of – a premium-compact sport-utility vehicle, they’ll still likely lean more toward the “sport” side of that descriptor. And that may be how Mercedes and Infiniti are aiming to differentiate two otherwise similar products – if indeed their exterior styling differences aren’t sufficient enough.

At least in front-drive Sport form, the QX30’s ride height is closer to that of a sporty car than a compact crossover.