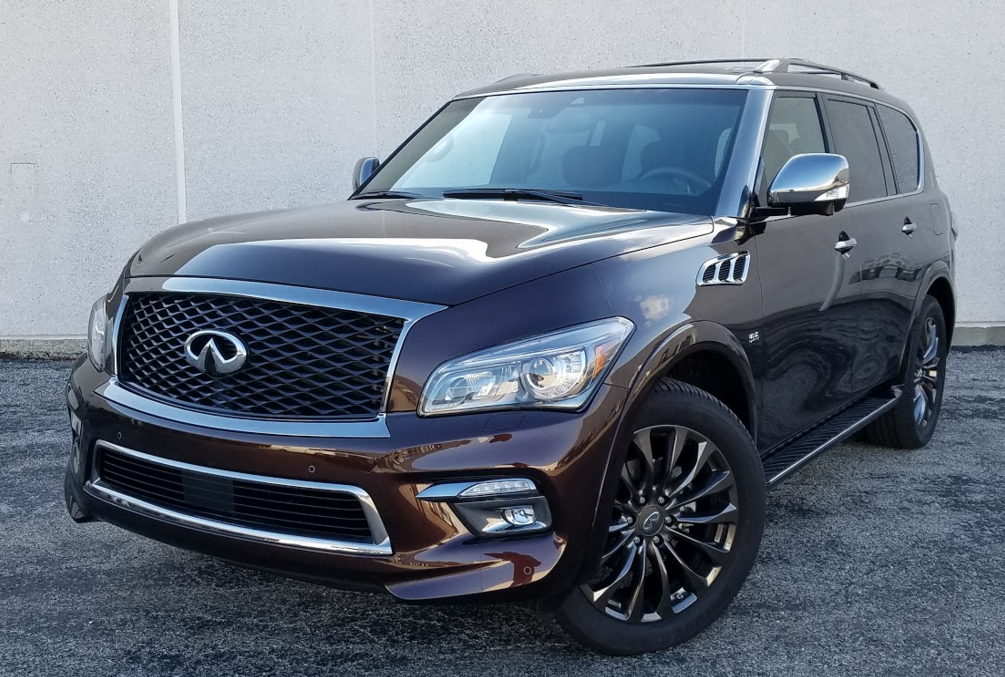 The not so good: Fuel economy, ride composure 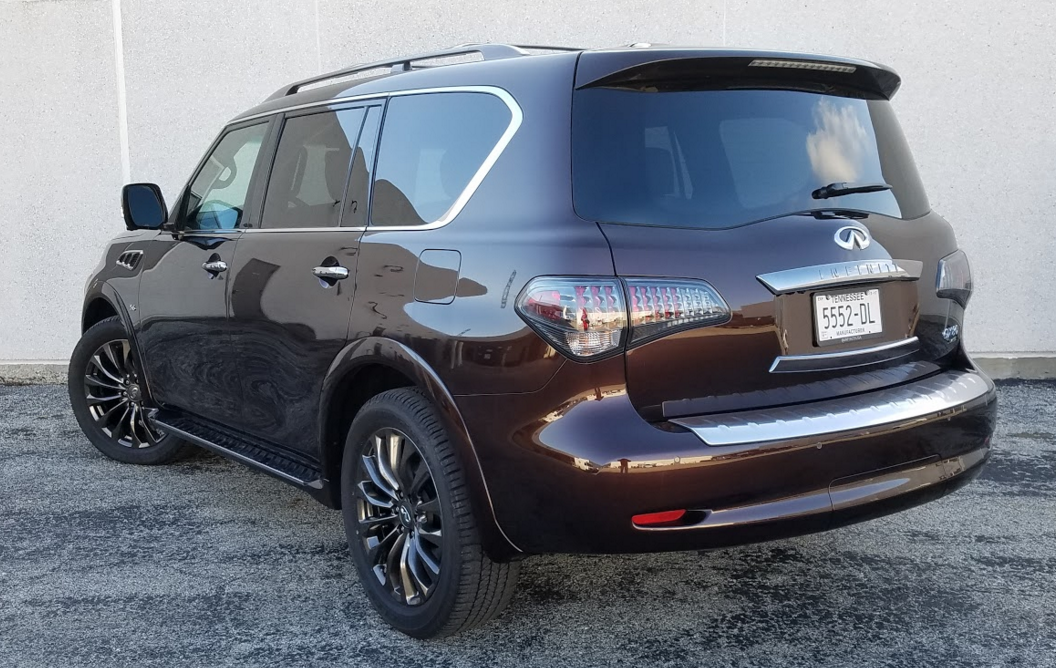 The QX80 can be easily identified by its reverse-slant rear roof pillars. Top-line Limited models — such as the one we tested — get dark-chrome-finished 22-inch wheels in place of the 20s found on other models.

By Consumer Guide’s count, there are only eight vehicles in the “Premium Large SUV” class, making it (rather ironically) one of the smallest in all of autodom.

In that rarified segment, the Infiniti QX80 runs about mid-pack in sales, coming in behind the Audi Q7, Cadillac Escalade, Land Rover Range Rover, and Mercedes-Benz GLS, but ahead of the Lexus LX, Lincoln Navigator, and Toyota Land Cruiser.

Still, it’s not as though the streets are thick with QX80s. And when you do see one, it stands out for its huge crosshatch grille and bulbous front end flanked by pencil-thin headlights, along with its reverse-slant rear roof pillar. So it doesn’t often escape notice — particularly if you hang out at gas stations.

In my 176 miles of 80-percent highway driving, I averaged a sobering 15.4 mpg. Yet that was nearly 1 mpg better than Tom and Damon did in their 791-mile drive that included a run from Chicago to Detroit (at, I suspect, a somewhat higher velocity) that also worked out to about 80 percent highway. Countering that was my recorded 0-60-mph time of just 6.1 seconds, pretty darn quick for a behemoth with this much space and a near-three-ton curb weight.

Although Infiniti also offers rear- and all-wheel-drive “base” models, the tested top-line QX80 AWD Limited started – and ended – at just over $90,000. (The only option offered for the Limited is a $450 WiFi hotspot, which makes you wonder why this .005-percent addition isn’t just standard.) Noteworthy features of the Limited include Truffle Brown quilted leather upholstery, Open Pore matte-finish ash wood trim, a Theater Package (with rear-seat entertainment), and huge 22-inch wheels, which replace 20s on other models.

Wood trim and padded leather abounds in the richly appointed cabin. While we appreciated the simplicity of the buttons-and-knobs controls, those mounted low on the vertical silver dash panel were difficult to decipher.

It’s that last addition that may have produced some unwanted side effects. Even relatively small pavement imperfections seemed to generate some “nervous” motions, though larger bumps didn’t make things much worse. This is often the case when such large-diameter wheels shod with corresponding low-profile tires (with short, somewhat inflexible sidewalls) are fitted. Handling was decent for such a tall, heavy vehicle, and the turning circle was more compact than I’d expected (Infiniti says it measures out to 41.6 feet).

We touched on the impressive power before, but it deserves more clarification. Nail the gas from a stop, and the QX80’s 400-horsepower 5.6-liter V8 responds by giving the heavy SUV a strong jump off the line. And quick downshifts from the automatic transmission result in an equally impressive rush if you hit the gas while underway. Furthermore, the combination gives the QX80 a beefy 8500-lb towing capacity.

Climb inside, and the QX80 looks every part of its $90,000 sticker. While I’m not a real fan of quilted leather, someone who is will be in heaven, and “flat” leather covers many surfaces. Nicer to me was the rich-looking wood and metal trim, the former, especially, being in vast supply.

As expected, there’s great headroom and legroom in the front and 2nd rows. Adults can fit in the 3rd row, as there’s decent head and leg room, but the low seat cushion will have them riding knees-up (not so much a problem with small kids). The vehicle’s high stance means a tall step-up into the interior, but running boards help. 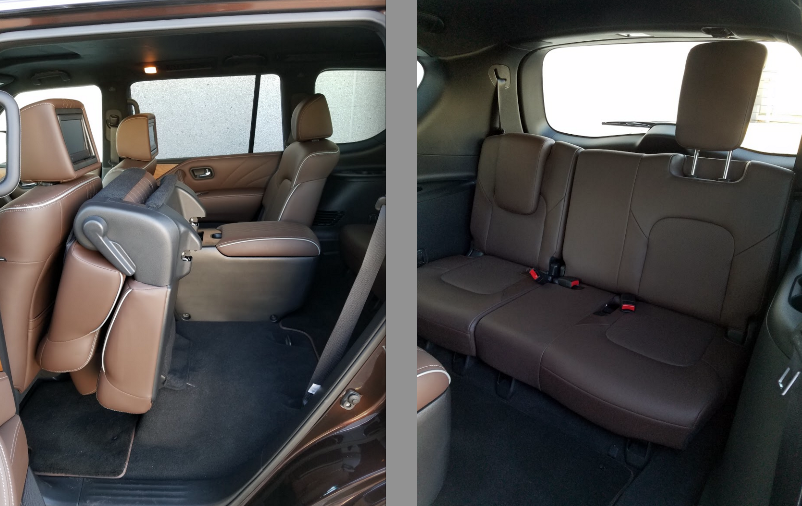 Second-row seats flip forward to open a large passage to the third row, which is roomy enough for adults, though they’ll ride knees-up. Note that the third-row headrests can be lowered to overlap the seat backs to keep them from blocking the view straight back.

The QX80 uses a combination of buttons, small knobs, a larger central-dash-mounted control knob, and a high dash screen for most audio/navigation/phone/climate adjustments, and most work OK. But some audio and climate controls are mounted low on a vertical panel that makes them unusually difficult to see and reach.

Visibility is rather poor to the front corners due to thick roof pillars, but it’s OK to the sides and back, and our tester offered a 360-degree “Around View” camera in addition to a conventional rearview camera. Interior storage is good rather than great, with the large console box offering the biggest compartment. 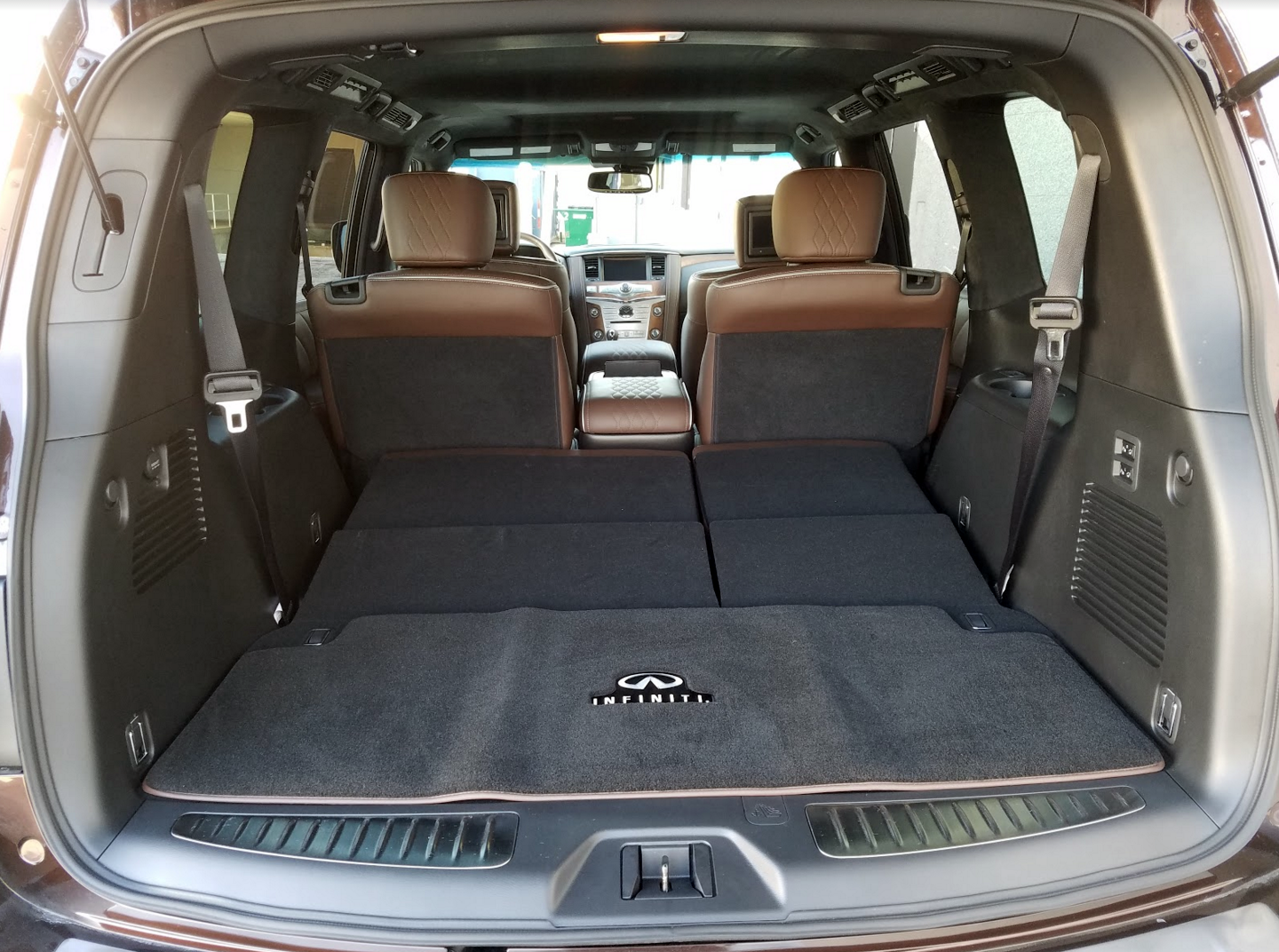 QX80 offers lots of cargo space, though the floor is fairly high off the ground. The 3rd-row seats fold flush with the floor (shown), as do the 2nd-row seat backs, though the console in the middle of the 2nd row sticks up above floor level.

Though the cargo floor in back is high – so you have to lift items far off the ground to slide them in – cargo space is vast. Fold down the 2nd– and 3rd-row seat backs, and a 4×8-foot sheet can lie nearly flat on the floor (“nearly,” because the 2nd-row center console sticks up a bit higher than the folded seat back, so the panel has to rest on the console lid), though it sticks out past the bumper a bit.

Just about every comfort, convenience, and safety feature you’d expect in a modern $90,000 vehicle are present and accounted for; best as we could tell, the QX80 Limited lacks for about nothing. It’s big, it’s brawny, and it’s loaded with luxury.

QX80 is a stately looking beast that holds its own it the small — and very pricey — Large-SUV category.