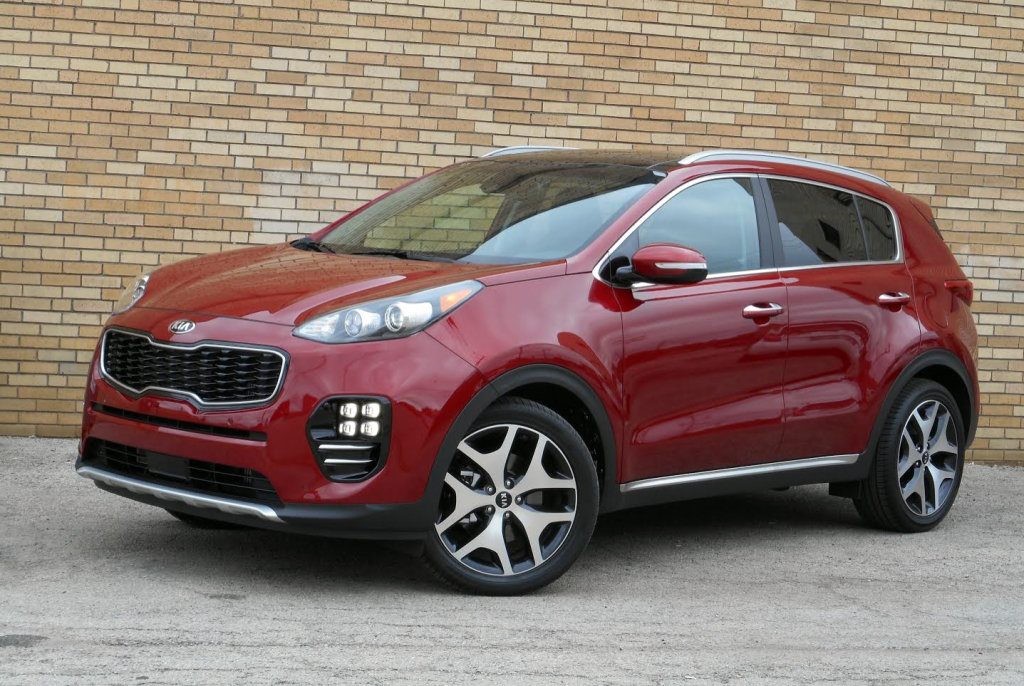 The not so good: Mediocre fuel economy for class

Do you want to save $1500 on a brand-new Kia Sportage compact crossover sport-utility vehicle? There’s nothing to it: Just buy a front-wheel-drive model.

That’s the price difference between front- and all-wheel-drive models of the same trim level in the redesigned 2017 Sportage family. The physical differences seem a lot closer. The front-driver sports a slightly blunter and deeper front fascia, and it sits .4 of an inch closer to the ground. 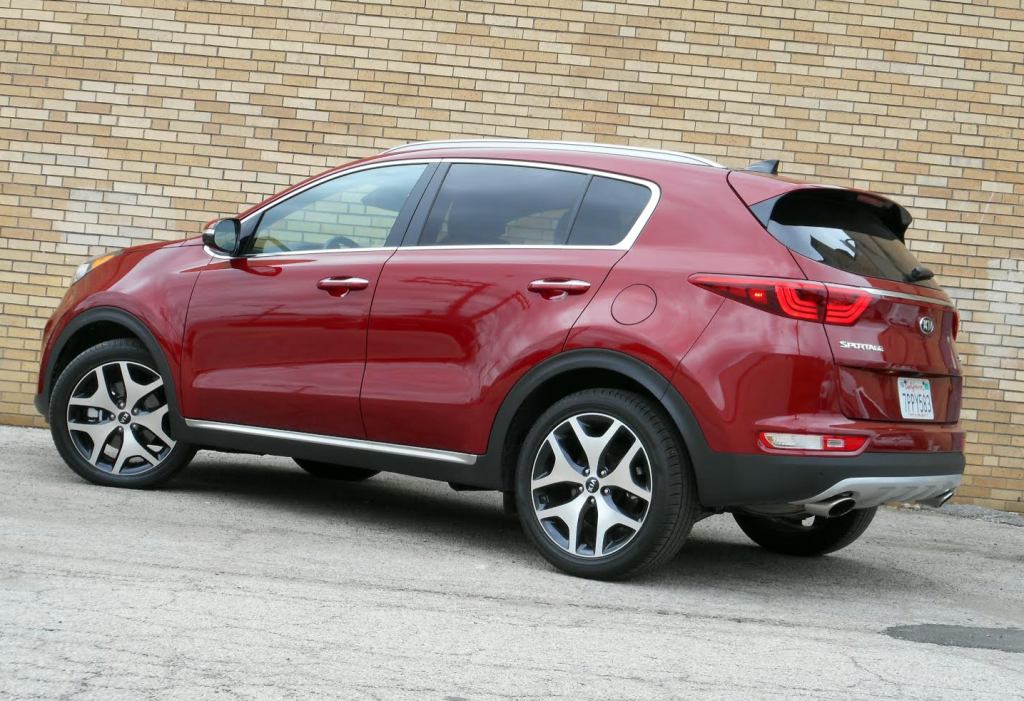 Otherwise, the top-trim SX “puller” that Consumer Guide® editors tested was a virtual match for the AWD SX that they tried out a couple of months earlier. Mounted on a slightly larger platform that supports a more spacious interior for ’17, the Sportage is further enhanced by the debut of Kia’s UVO3 infotainment system with Apple CarPlay and Android Auto smartphone connectivity, UVO eServices telematics services, up to eight gigabytes of music storage, and Wi-Fi tethering capability. 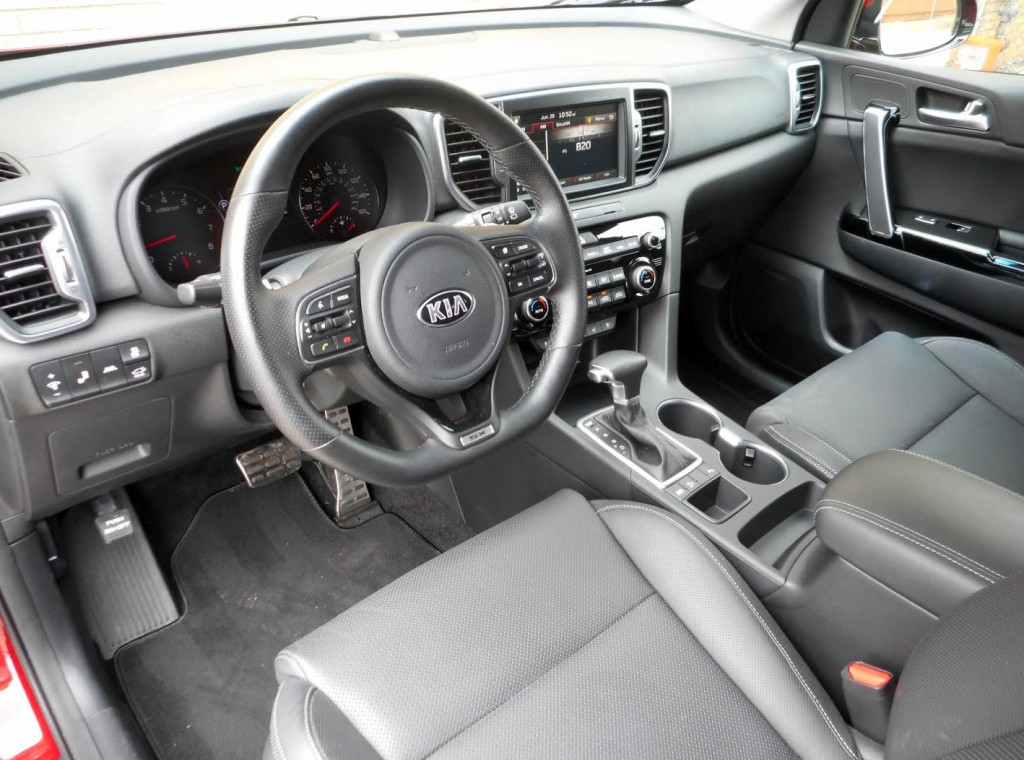 The Sportage cabin is roomy enough for big and tall folks, and is nicely finished in good-quality materials.

Sportage SXs run with a turbocharged 2.0-liter four-cylinder engine and six-speed automatic transmission. The powerplant is rated at 240 horsepower at 6000 rpm—three more horsepower than the all-wheeler gets—and 260 lb-ft of torque at 1450-3500 revs. “Sport” and “Eco” settings on the Drive Mode Select system alter the throttle (and steering) behavior a little bit, but even in “Normal” mode the turbo engine is pretty lively. Indeed, this driver was surprised to bring on some tire squeal a couple of times when getting off from standing starts. The automatic transmission is well matched to the engine. While shifts aren’t clunky, they are still palpable, which stands out in a world of increasingly seamless automatics.

A front-drive SX weighs 99 pounds less than a similarly equipped AWD version, so another thing it can save besides money is fuel—which is saving money, come to think of it. The EPA pegs the turbo four at 21 mpg in the city, 26 on the highway, and 23 combined, while the respective figures with AWD are 20, 23, and 21. With the front-drive SX, this tester averaged 21.7 mpg after a 205-mile trip that featured 60 percent city-type motoring. That was just a half-mile per gallon better than he did in a very similar stint in the all-wheel-drive job. 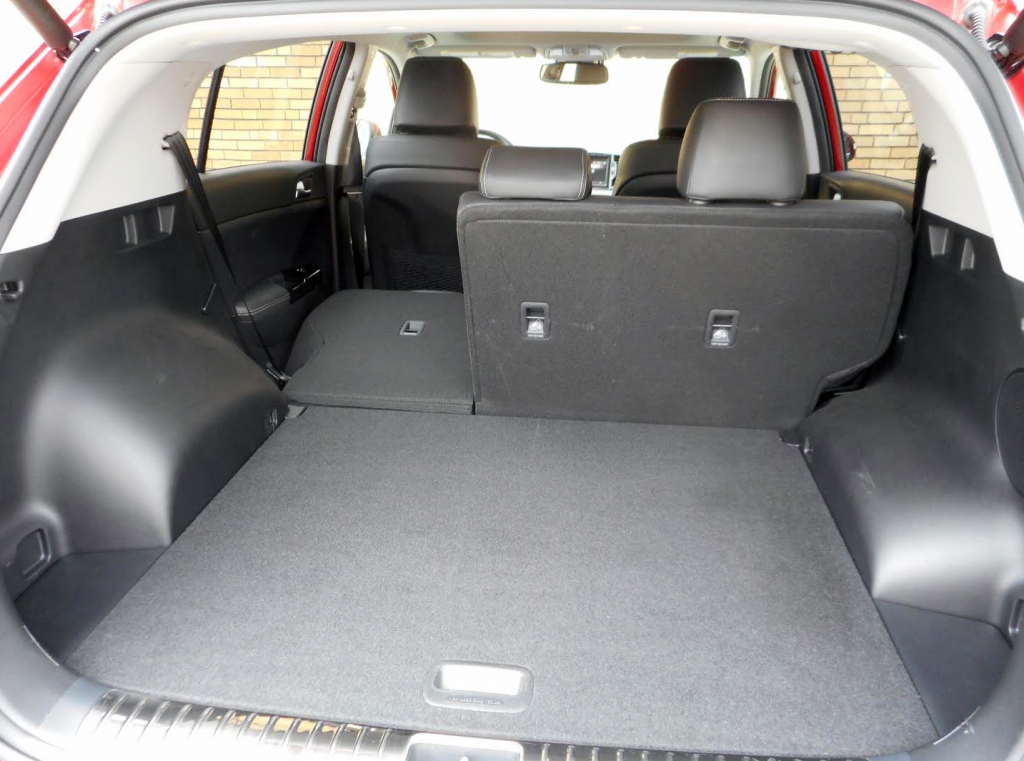 Sportage’s 2nd-row seatbacks are split 60/40, and fold nearly flush with the load floor.

Apart from the front-driver’s ability to spin the tires a little easier, handling and maneuverability were about the same as in the all-wheeler on dry pavement. (Colleagues who drove in the wet may have a different story to tell.) Ride was generally quiet and composed even in places where the City of Chicago Bureau of Random Holes in the Ground left behind its asphalt-cleaving handiwork.

There was certainly no change in the user experience in terms of interior comfort, controls, and cargo storage. Soft-touch materials cover the top half of the instrument panel, the tops of the front doors, and the armrests and centers of all four doors. Headroom is very good throughout but legroom is better in front than in back. Three adults might squeeze across the rear seat—for a little while at least. Wide rear roof pillars are the exception to good all-around vision for drivers.

Buttons below the touchscreen activate audio, phone, navigation, and other functions. A separate tuner dial permits easy selection of radio stations, which are entered as presets with a simple press on the screen. Climate settings are handled by a row of function buttons and rotating knobs for temperature control. A thin-film-transistor driver-information display rests between the analog tachometer and speedometer.

A bit of useful space is found in the glove box and covered console cubby. There are some small wells in the console, small pockets (with bottle holder) in the front doors, and bottle-holder-sized slots in the rear doors. Open cup holders reside in the console and in the pull-down armrest in the middle of the rear seat. Cargo loading benefits from a wide hatch opening and bumper-height loading onto a flat floor. The 60/40-split second-row seats fold flat, and when both are down, available cargo room nearly doubles.

With the $895 delivery charge, CG’s front-wheel-drive test truck topped out at $33,395. Indeed, the SX comes loaded. There are no option packages at that level, only some stand-alone appearance and storage items—and, of course, that all-wheel drive. . . .

It’s always telling to drive front-drive and all-wheel-drive versions of otherwise identical vehicles. In the case of the Sportage SX, the front-drive version tested here was good for 24.8 mpg, this in mostly highway driving. Our AWD test Sportage SX returned 20.9 mpg, that in mostly city driving. Driven under similar conditions, I suspect that the front-drive/AWD fuel-economy gap would be less pronounced. For that reason, I am inclined to recommend that shoppers considering the Sportage SX go with the AWD version for a couple of reasons. First, the front-drive SX was prone to wheel spin and torque steer when pulling rapidly away from a stop. Second–and this applies to all vehicles on which AWD is available–you get most of the extra cost back in the form of improved resale value. Yes, you’ll pay a little more for fuel, but in this case, all-wheel drive makes the Sportage a better vehicle. 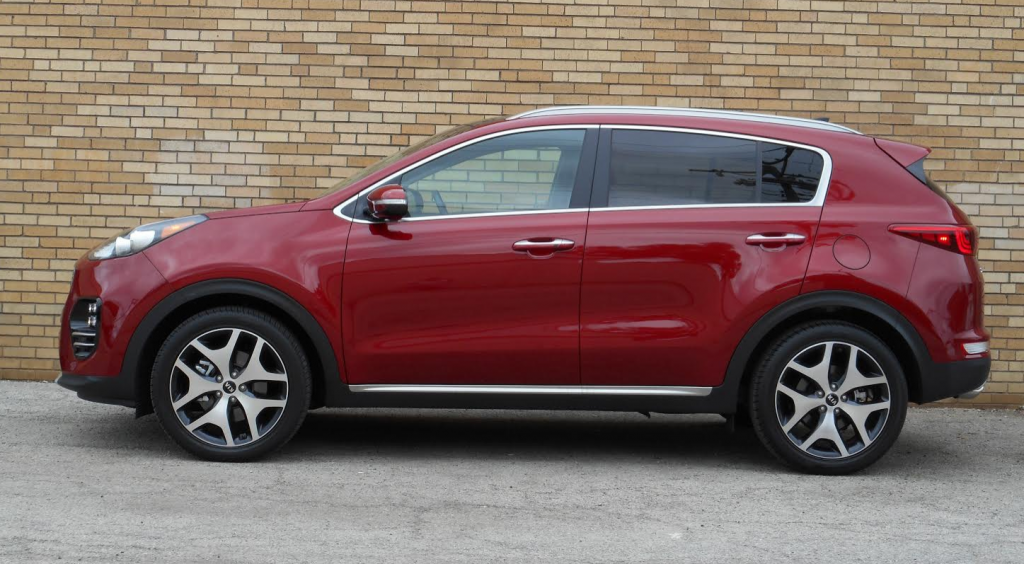 In the highly competitive — and wildly popular — compact-SUV class, the Sportage sets itself apart by offering the potent 240-horsepower turbocharged engine fitted to our test SX; I think only the V6 engines available in the Jeep Cherokee and Wrangler have more ponies in their under-hood corral. That engine delivered a quick 6.9-second 0-60 run, but what it sacrificed was fuel economy; our 24.8-mpg average in 80-percent highway driving isn’t great for the segment, though it coincides nicely with the EPA numbers. Like John, I wasn’t particularly enamored with the transmission, but for those who want an SUV that’s on the peppy side, the Sportage SX is a fine choice.