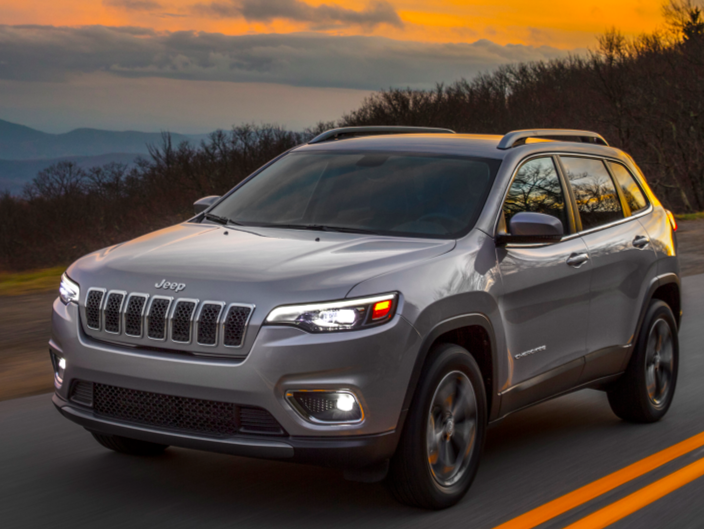 With the automotive market making a tsunami-like shift to SUVs, Jeep has found itself in an enviable position.

Although the company has sold pickups and even cars during its long history, all were at least offered with 4-wheel drive, making “Jeep” and “4-wheel drive” virtually synonymous. And in recent years, only SUVs have graced the showrooms, leaving the company perfectly positioned for the current wave.

At the heart of the SUV surge are compact models, most falling under the “crossover” designation, being largely based on car platforms. And though only Jeep’s legendary Wrangler is built on a conventional truck-type frame, other models still strive for more of a “husky” SUV flavor, most offered in versions touting off-road capabilities second to none.

In that compact segment, Jeep has two offerings: the smaller Compass, redesigned for 2017, and the larger Cherokee, which sees numerous updates as an early 2019 model that’s due on sale by early March. 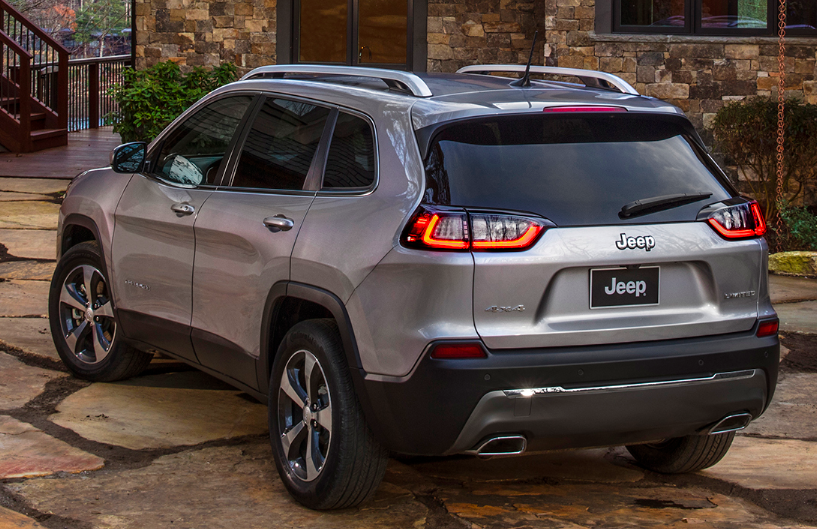 New LED headlight and taillight “signatures” are notable aspects of the restyle, which also moves the license plate up into the new composite liftgate that helps trim 150 lbs. off the Cherokee’s curb weight. A 2.0-liter turbocharged engine is newly offered, and a hands-free power liftgate is an appreciated new option.

Jeep styling takes one of two courses: “rugged” (denoted by squarer bodies and round headlights) for the Wrangler and subcompact Renegade, “premium” (softer lines and sculpted headlights) for the others. Moving the Cherokee deeper into premium territory was one of the major objectives with the 2019 changes.

Most noticeable is a revised front end featuring a taller, flatter grille and standard LED headlights styled to look more like those found on the Compass and midsize Grand Cherokee. So successful was this transformation that it’s now a little difficult to distinguish one model from another, though all certainly share a definitive Jeep look.

But other changes were made as well. Switching some parts to lighter-weight materials (the hood is now aluminum, the tailgate plastic composite) has saved 150 lbs. overall, which aids both performance and economy. A new turbocharged 2.0-liter 4-cylinder engine joins the powertrain roster, and a host of new features have been added, including standard Apple CarPlay/Android Auto and a capless fuel filler, along with an available hands-free power liftgate. Add to that a complete list of available high-tech safety and convenience equipment, and the Cherokee is now fully competitive on the feature front with other members of the compact class.

EPA fuel-economy figures had not yet been released at the time of this writing, but Jeep says they should be up across the board, thanks in part to the Cherokee’s lighter weight and the stop/start feature found on all three engines.

Five Cherokee trim levels will be offered: base Latitude, Latitude Plus, Limited, top-line Overland, and off-road Trailhawk, with prices ranging from $25,190 (including $1195 destination) for the base front-drive Latitude to $38,970 for the line-topping 4WD Overland. All models come standard with front-wheel-drive save for the $35,515 Trailhawk, though adding a base 4WD system costs only $1500 extra. 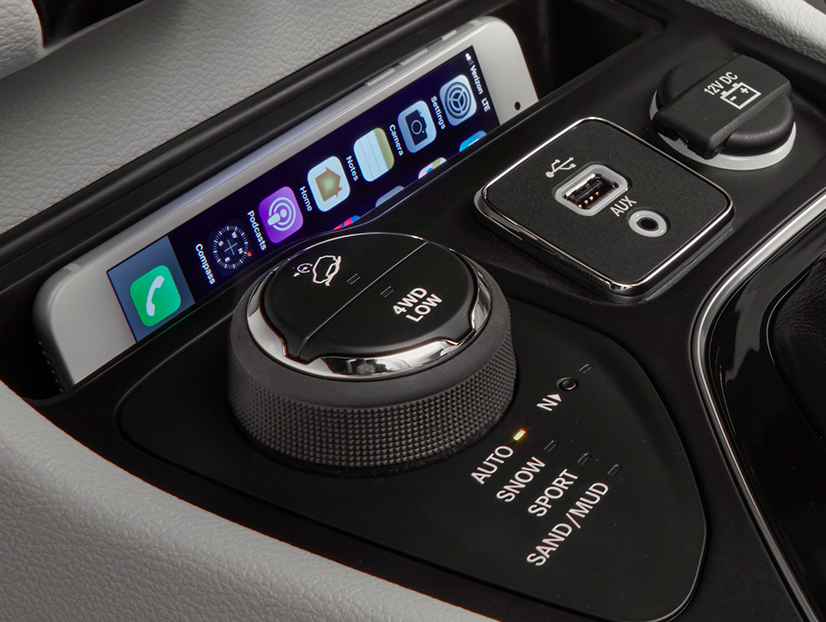 All 4WD models get Jeep’s Selec-Terrain feature, which optimizes powertrain and traction-control functions for different situations; the Trailhawk adds a “Rock” setting to the four shown.

Speaking of 4WD systems, three different ones are offered on the Cherokee: base Active Drive I, Active Drive II that adds low-range gearing and a Neutral position so that the vehicle can be towed behind another, and Active Drive Lock with low-range gearing and locking rear differential. All systems include Jeep’s Selec-Terrain, which offers four modes (Auto, Snow, Sport, and Sand/Mud), while the Active Drive Lock system on the Trailhawk adds a Rock mode. Also available are hill-descent control and Selec-Speed Control, the latter of which allows you to set an uphill or downhill speed from 1-5 mph, and the vehicle will maintain that speed with your feet off the pedals.

The Trailhawk is the only Cherokee to wear Jeep’s coveted “Trail Rated” badge, which isn’t just slapped on any fender; it has to be earned.

At the press preview outside Los Angeles, we only had the opportunity to “street drive” a Latitude with the base 2.4-liter engine, and Limiteds with the V6 and 2.0-liter turbo. (We also drove a Trailhawk on a rugged off-road course, where it went places I’d never have the guts to take it on my own.) By far the best was the V6: strong off the line, linear power delivery, good kickdown response when hitting the throttle from speed. The 2.4 was the same though dialed back somewhat, but it still supplied adequate acceleration. Noteworthy about the V6 is that it not only stands as one of just two offered in the compact class (the other being a 3.0-liter V6 on the 3-row Mitsubishi Outlander), it also gives the Cherokee what Jeep says is a class-leading 4500-lb. towing capacity. (Standard is 2000-lb capacity, still a lot for the class.)

By contrast, the 2.0 turbo was less predictable. There wasn’t any more snap off the line than with the 2.4, with power coming on suddenly and strongly about 20 feet out. Kickdown response was not nearly as good, either, though it was better in Sport mode, which keeps the transmission in a lower gear – and thus the engine spinning faster – at any given road speed. It’s possible that the 2.0 turbo is actually the quickest of the bunch in a 0-60 sprint (and perhaps even the best in fuel economy), but we prefer the V6 for everyday driving.

Though we drove through plenty of twists and turns, where the Cherokee proved itself quite capable, we didn’t encounter the kind of rough pavement we’re used to around our Chicagoland office, so an evaluation of ride quality will have to await a local test. However, it seemed as though the Latitude with 17-inch tires rode quite well, with a bit less small-bump brittleness than the Limiteds on 18s. 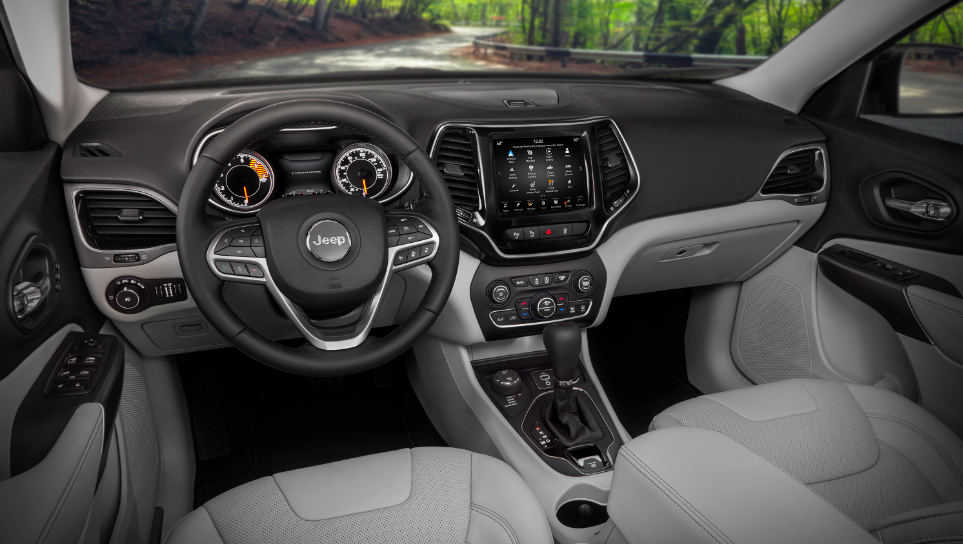 Inside, soft surfaces abound, with the dashtop, door tops, and armrests all being padded, and available two-tone combinations add some contrast. Audio controls are mounted high within easy reach (and include volume and tuning knobs), and both the standard 7-inch and available 8.4-inch UConnect infotainment systems are among the easiest of their kind to use. Climate controls are also easy to reach, but though fan speed is adjusted with a convenient rotary knob, temperature is adjusted with less-convenient repetitive-step pushbuttons, with mode having to be changed through the dash screen.

Front seaters are treated to very good headroom and legroom, and – notably – the driver seat can be raised way up (a boon to shorter folks), and upper-line models offer heat/ventilation, along with driver-seat lumbar adjustment and memory. In back, legroom is fine (and the seat adjusts fore/aft to balance rear legroom and cargo room behind it), but in a vehicle with the dual-pane sunroof, headroom was barely sufficient even for my 5’9 frame. Notable is that the Limited we tested had two USB ports back there along with an optional 115-volt AC power outlet.

Visibility isn’t the best. It’s just OK to the left front, sides, and rear, and a bit more restricted to the right front due to the profile thickness of the roof pillar. A rearview camera is standard, and even the base Latitude is available with rear obstacle detection.

The interior hosts a number of useful storage areas, but none are very large. A modest-size glovebox is joined by a decent-size 2-tier console box with USB and 12-volt plugs, two console cup holders, a tiny console tray, a larger forward console tray behind Aux/USB/12-volt jacks, a small left-side dash bin, a covered dashtop tray, and small map pockets in the doors. 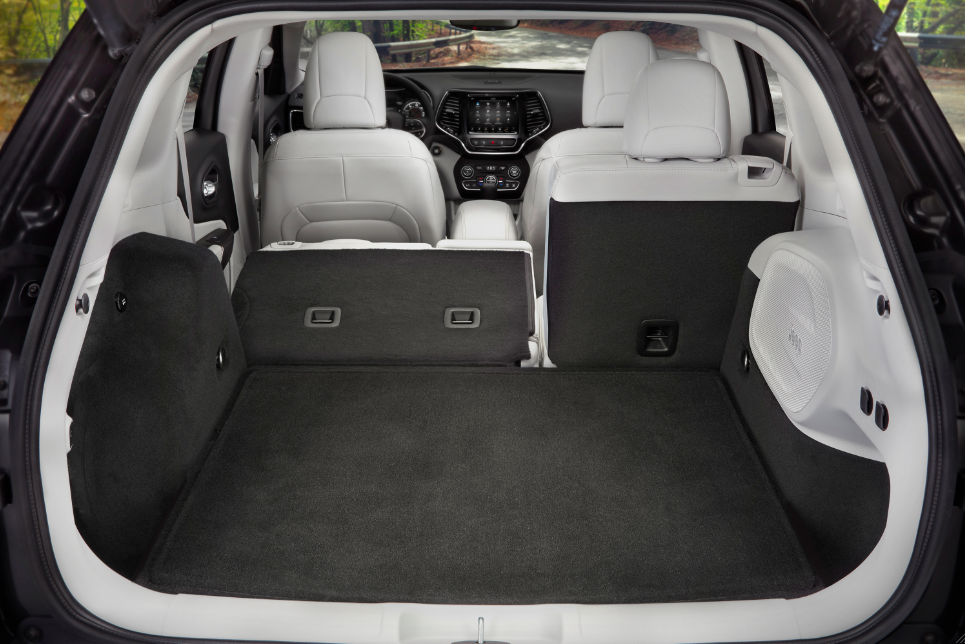 Jeep says the cargo area behind the wheelwells is three inches wider than before, now allowing a golf bag to lay crosswise. The cargo floor can be set to two positions; shown is the higher position, which leaves it level with the folded rear seat backs.

Jeep says the cargo area is three inches wider than before, and now allows laying a golf bag sideways behind the rear wheel wells. There’s also a 2-tier cargo floor; in its raised position, it rests level with the easy-to-fold rear seat backs and offers a large, flat, “hidden” storage space beneath it. You can now get not only a power liftgate, but also a “hands free” one that opens or closes automatically when you swipe your foot under the rear bumper.

While its legendary Jeep nameplate might be reason enough for some folks to consider the Cherokee, even those who don’t revere the brand will find a lot to like here. The three engines and variety of 4WD systems offered afford more powertrain choices than most rivals, and there aren’t many class-available safety/luxury/convenience features missing from the Cherokee’s roster. Although prices aren’t in bargain territory, the five-model lineup and available option packages allow buyers to tailor one to their needs and budget, all of which could end up making the Cherokee the most popular member of an already popular lineup.

Most significant appearance change to the 2019 Cherokee is its taller, flatter front end, which leaves it looking more like its smaller Compass and larger Grand Cherokee siblings.