Volvo is on a tear.

After years of product stagnation, the Swedish company recently announced that it would bring out a string of eight new or redesigned models over a four-year period – a rather ambitious undertaking for such a small company.

The first salvo in this barrage arrived as a 2016 model in the form of a redesigned midsize XC90 7-passenger crossover, followed for 2017 by the midsize S90 sedan and V90 wagon. Now it’s the XC60’s turn.

When it was introduced for 2010, the XC60 became Volvo’s first compact SUV. Residing in a class that has since exploded in popularity, the model often led the company’s sales charts, despite the fact that it had seen few updates since its inception.

That will change – in a rather big way – when the redesigned 2018 model goes on sale in August. The question is, have all those changes resulted in a new class benchmark, or have they simply allowed the XC60 to “Keep up with the Joneses’”?

Side sculpturing is much more prominent on the redesigned XC60, which grows a bit in overall length and quite a bit in wheelbase, to the benefit of rear legroom.

After arriving in Barcelona, Spain, I discovered (in addition to the fact that my cell phone didn’t connect and my dollars were no good) that visual changes to the 2018 XC60 make the new model similar in appearance to the outgoing model yet instantly distinguishable. First noticed were Volvo’s trademark “Thor’s Hammer” headlights now worn by other recently updated models in the corporate lineup. But side sculpturing and rear-end treatments are also distinctly different, making the 2018 look “new” from virtually any angle. Overall length is up by less than two inches, but the wheelbase is stretched by 3.6. The latter, in particular, aids rear-seat legroom, which grows by 1.6 inches to 38.0. However, cargo space is down a bit, now measuring 63.3 cu. ft. with the rear seat backs folded down.

Last year, the XC60 traded its 5- and 6-cylinder engines for Volvo’s 2.0-liter “corporate” 4-cylinder engines, the T5’s being turbocharged for 250 horsepower, the T6 blessed with turbocharging and supercharging to make 316. Those carry over for 2018, but added is the T8 plug-in hybrid powertrain from the larger XC90 crossover, which pairs the T6 engine with a rear-mounted electric motor for a combined 400 horsepower – enough to turn the relatively light XC60 into something of a rocket. Volvo says the T5 will dash from 0-60 mph in 6.4 seconds, the T6 in 5.6, and the T8 in an impressive 4.9 — making it one of the quickest of its “hot rodded” classmates (such as the Audi SQ5, Jaguar F-Pace S, Mercedes-Benz GLC43, and Porsche Macan Turbo) while undercutting all of them on price.

The two-tone interior looks decidedly dressy, with rich materials and fine detailing. Storage space is only so-so, however.

Speaking of price, all XC60s come standard with all-wheel drive and are offered in Momentum, R-Design, and Inscription trim levels, with the base T5 Momentum starting at $42,495 including destination. Starting price of the T6 is $45,895, with the T8 starting at $52,900, topping out around $68,000 for a fully loaded Inscription with every option. Furthermore, even the entry-level T5 Momentum comes rather lavishly equipped, boasting a host of standard features — such as leather upholstery, a moonroof, rain-sensing wipers, 10-way power driver seat with power lumbar and memory, and a power tailgate — that are usually optional (often at great expense) on rivals. Though ground clearance drops from 9.1 inches (very high for the class) to 8.6 (still high), notably optional on all models is Volvo’s FOUR-C Active Chassis air suspension that includes an off-road mode that raises the height another 1.6 inches. Also optional on all models are an $1100 Vision Package (including — among other things — blind-spot and rear-cross traffic alert and front-and-rear obstacle detection), $2200 Convenience Package (a host of items including adaptive cruise control, power-folding 2nd-row seat backs, heated wiper blades, and hands-free tailgate), and $1900 Advance Package (mainly a head-up display and 360-degree camera). Inscriptions also offer a $3000 Luxury Seat Package, and there are a few individual options. 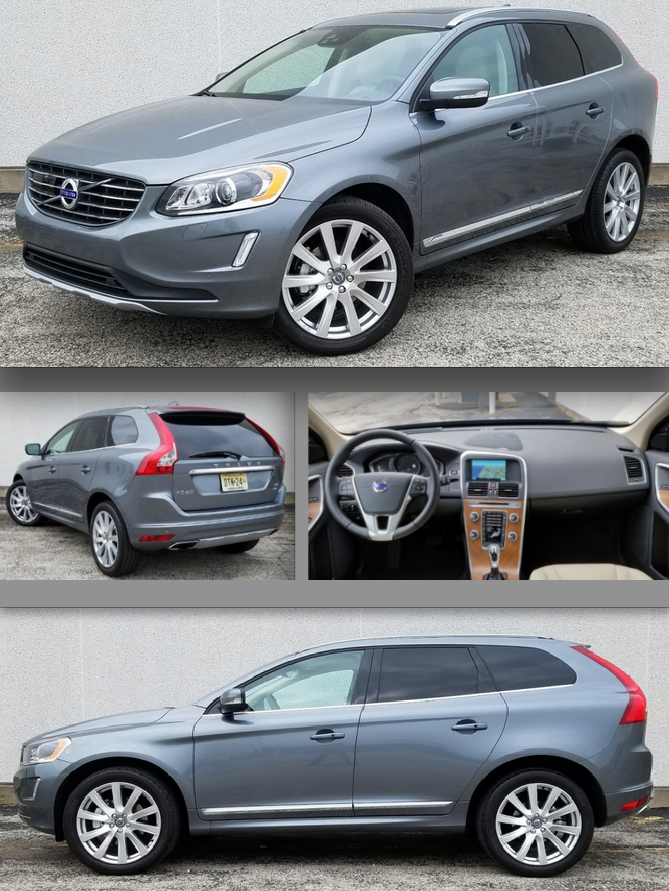 This is a 2017 XC60 we tested last year. Notice that the long-hood proportions carry over to the new model as do some styling elements, but it’s less distinctive looking, and the dashboard hosts an entirely different, button-centric layout.

More important to Volvo’s “safety cred,” however, are some new high-tech features aimed at avoiding accidental confrontations. These include Steer Assist, On Coming Lane Mitigation, and BLIS with Steer Assist.

Steer Assist combines with vehicle, pedestrian, cyclist, and large-animal detection to help drivers avoid obstacles by adding additional steering input if necessary and braking individual wheels to increase vehicle control. Oncoming Lane Mitigation will steer the vehicle back into the lane if it crosses the center stripe when an oncoming vehicle is detected. BLIS (BLind-spot Information System) with Steer Assist provides counter steering force if the driver doesn’t heed the warning given when attempting to change lanes with a vehicle in the blind spot. The first two join the list of standard safety features that also includes forward collision warning and mitigation, lane-departure warning and mitigation, drowsy/distracted driver alert, and road-sign information. Optional are BLIS blind-spot alert, rear cross-traffic alert, and front and rear obstacle detection.

What we drove at the preview were loaded, Euro-spec T6 Inscriptions. According to Volvo, the biggest differences from the U.S.-spec versions are a lack of side marker lights and a convex left-side mirror (which gave a wide-angle but eerily distorted view of vehicles to the left).

Nail the throttle from a stop, and the T6 jumps; there’s virtually no “turbo lag,” likely due to the added supercharger. Passing power is also good, aided by quick transmission kickdowns.

While we didn’t encounter the kind of rough pavement found around our Chicagoland office, the XC60 seemed to ride and handle quite well; we’ll get a better idea when we test one locally.

Volvo has made quite an effort to dress up its interiors of late, and that’s evident in the XC60 — or at least, in the T6 Inscriptions we drove. There are plenty of padded surfaces, lots of nice-looking wood trim, and numerous bright accents that combine to provide a rich ambiance. Visibility is good to the front and rear corners (the latter aided by the power-folding rear headrests that come as part of the Convenience Package), but restricted a bit to the sides due to thickish roof pillars. The rearview camera in the T6 driven included a 360-degree view (also part of the Convenience Package), and you could select individual camera views from any of the four sides to display on the large dashboard screen. One oddity is that the sun visors don’t extend when swung to the side, leaving about three inches of the window uncovered.

There’s a volume knob at the bottom, but virtually every other infotainment, climate, and vehicle-settings function is done through the touchscreen, which uses smartphone-like left and right (and sometimes, up and down) “swiping” to access different screens. The 360-degree camera lets you choose a variety of views.

Vehicles offer a dizzying assortment of infotainment features nowadays, and it’s interesting (not always the descriptor used) to see how the various companies manage the complexity. Volvo does it differently than any other I know of, using a large, vertically oriented touchscreen that needs to be swiped left and right (and sometimes up and down) to cover all the bases. Not only are the infotainment adjustments found (often through much trial and error) on one screen or another, but so are some climate functions, settings for different assistance features (to turn on or off), and even the driver-seat adjustments. While it’s one of the many systems that are daunting at first but get a bit easier to use once you become familiar with how it works — hopefully after much study when the vehicle isn’t moving — this is most certainly not the the vehicle best suited for rental service.

Head and leg room in front is good rather than great, and our tester had heated and ventilated front seats with massage function, and an extendable driver-seat cushion, all courtesy of the Luxury Seat Package. Room is better in back, where the seats are comfortable and the cushions are quite high, meaning adults don’t have to ride knees-up, and entry and exit are fairly easy. However, the center floor hump is quite wide, restricting foot space for a center passenger. Our tester was equipped with heated rear seats (also part of the Luxury Seat Package) and rear-seat climate controls. 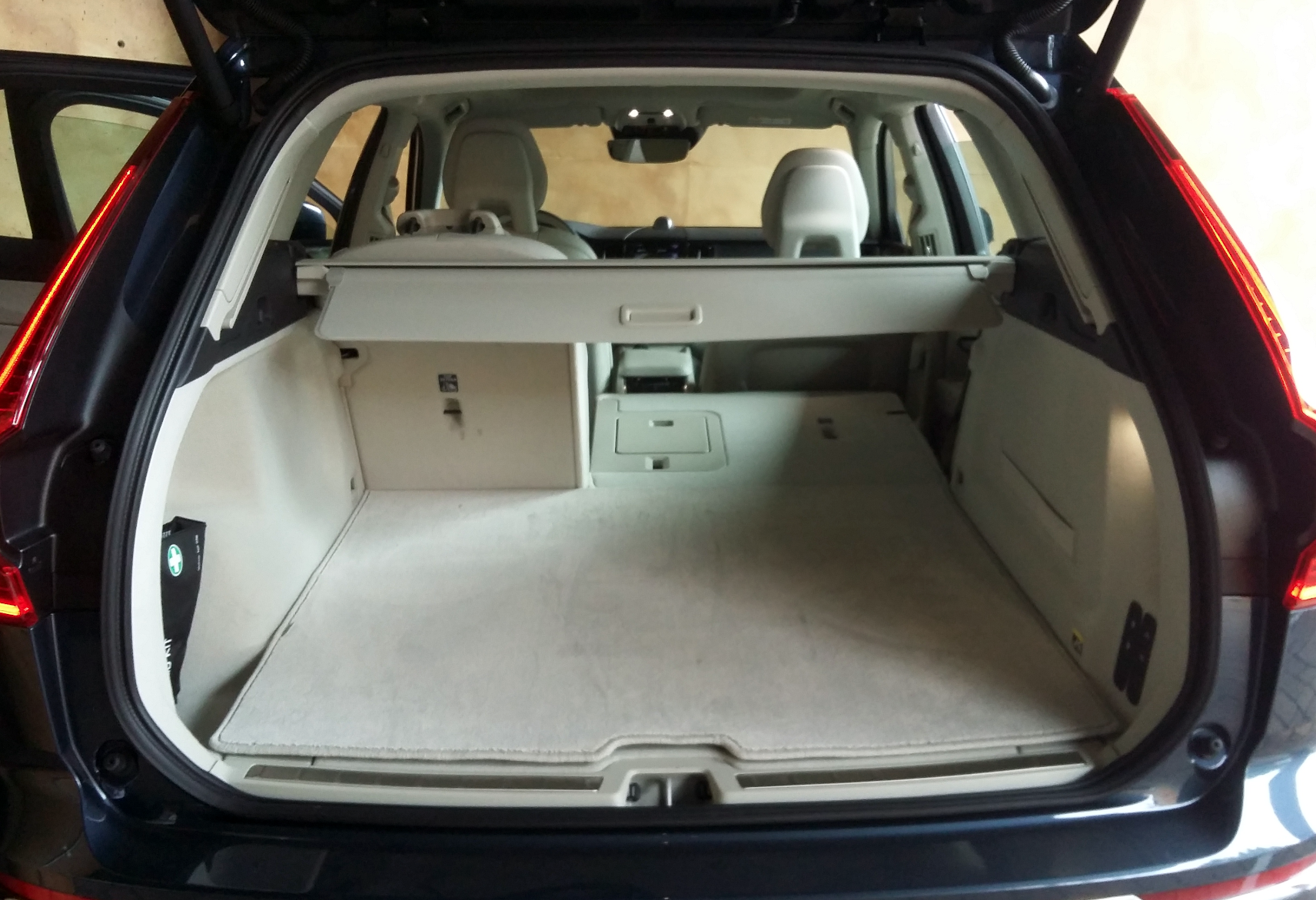 The cargo space is usefully large, highlighted by a huge underfloor bin and — on our Inscription, at least — power-folding rear seat backs and hands-free power liftgate.

Cabin storage is also good rather than great, but cargo space in back — or at least, its versatility — is impressive. The area is wide at the rear and has a huge under-floor storage bin, and the rear seat backs fold flat and level with the cargo floor (with a push of a cargo-area button thanks to the Convenience Package) to expand the space.

By most measures, the Volvo XC60 is a very impressive entry in a very popular segment. Tops on its list of attributes are the value proposition of T5 models, the performance of  T6 (and probably T8) versions, and the safety features available in all. Whether this puts it at the head of the premium-compact class may depend on your viewpoint, but there’s little doubt that more people should consider the XC60 than probably have in the past.

People probably associate Volvo with safety more than performance, but the new XC60 — at least in T6 or T8 trim — offers a healthy helping of both.