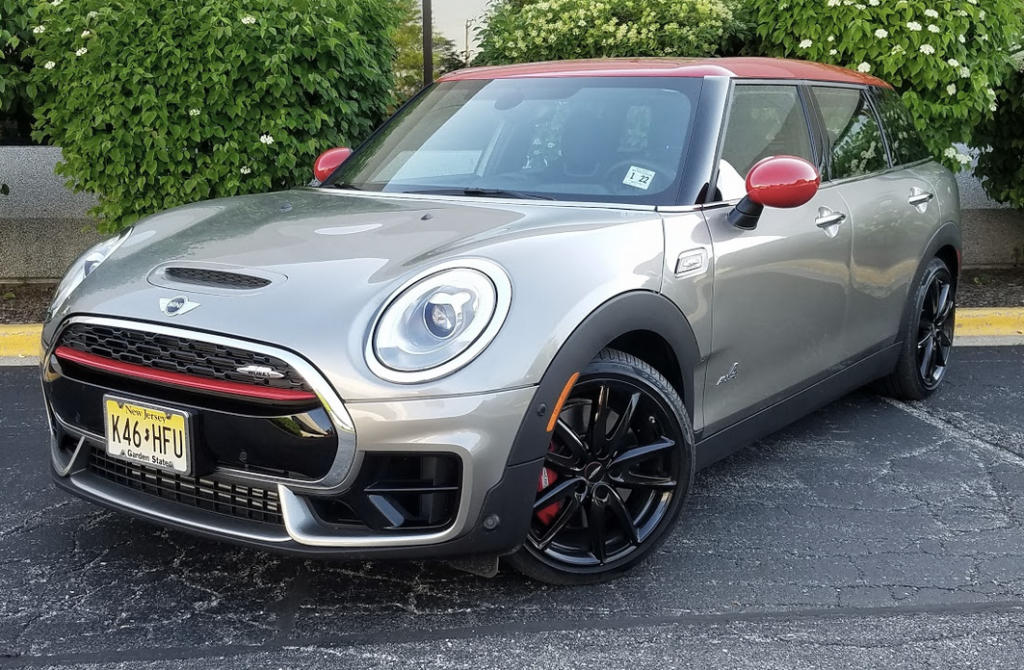 The good: Easy on the gas

The not so good: Limited 2nd-row passenger space, escalating prices

You can order a Mini Clubman station wagon with everything on it, or you can get one with the Works. For the benefit of anyone who’s now confused, they’re not the same thing.

Consumer Guide®’s latest test run in the second-generation Mini wagon was with a John Cooper Works edition—the hot rod of a group that also includes Cooper and Cooper S versions. The “JCW” boasts a 228-horsepower variant of the turbocharged 2.0-liter 4-cylinder engine that makes 189 horsepower in the Cooper S, and it comes solely with ALL4 all-wheel drive that is a new feature for 2017 Minis. (The lower-line models can also be had with front-wheel drive.) It maintains much of the driving delight that makes 2-door Mini Coopers so much fun, but adds a degree of practicality that the other body styles can’t begin to match. 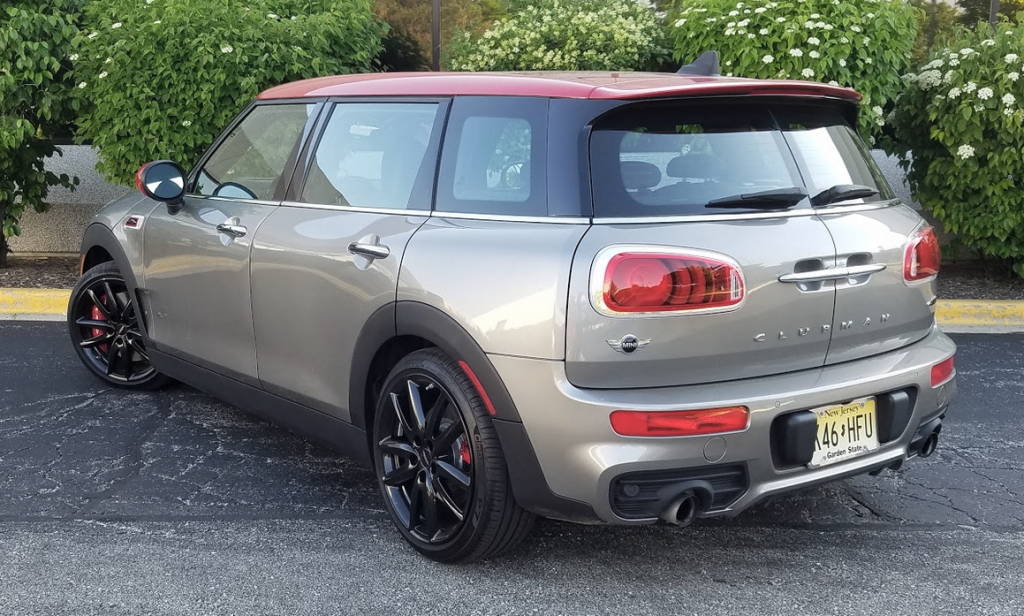 ALL4 is a permanent AWD system that works with the standard Dynamic Stability Control to quickly calculate the best power allocation to the wheels in pursuit of optimal grip. The test car was outfitted with optional Dynamic Damper Control that changes ride characteristics for better handling or a little more comfort.

All redesigned Minis feature an updated instrument panel and center console. Brand loyalists will appreciate the return of the marque’s signature toggle-switch controls. Rear-seat legroom is marginal behind taller drivers, though the Clubman is probably a little roomier than most car shoppers expect.

Along with its extra dose of horsepower, the JCW’s engine also has more torque, a healthy 258 lb-ft that peaks before 1500 rpm for “let’s not linger” takeoffs. (Mini claims 0-to-60 mph in 6 seconds, almost a full second faster than a Cooper S ALL4.) Out on the highway the Works wagon cruises easily, if not necessarily quietly, and has ample passing power. All Minis come with selectable driving modes—“Mid,” “Sport,” and “Green”—that alter fuel delivery and steering crispness. There are palpable differences in eagerness between the modes, and even perhaps a little hairier exhaust report when in Sport. The standard 6-speed manual transmission shifts without indecision. Clutch action is firm but not tiringly resistant. The EPA rates the JCW powerteam at 21 mpg in the city, 31 mpg on the highway, and 24 combined. This driver averaged 21.4 mpg in a test turn of 175.9 miles made up of 70 percent city-type operation.

Any Mini is quite nimble, and all the more so when dialed into Sport with its more-responsive steering. With a wheelbase that’s up to 6.9 inches longer than any other Mini Cooper, even the JCW Clubman rides pretty well, especially in Mid mode. Be ready to sacrifice a bit of that comfort when the damper control steps up to serve the needs of performance, though.

The gen-II Clubman that first appeared as a 2016 model is a full 4-door wagon, which makes it a bit more convenient than the first-series Clubman with its right-side third “Clubdoor” that couldn’t be used unless the front passenger door was opened first. However, it does continue the tradition of quaint side-hinged panel-truck cargo doors that goes back to the days of the Morris and Austin Minis of the 1960s. The Clubman has the widest body of the Mini Cooper models, and offers the best interior space. The current Clubman design provides more rear-seat legroom than its predecessor but second-row occupants may not recognize that fact if they’re sitting behind long-legged passengers who need to track their seats back. Even with the 60/40-split rear seats in place there’s enough cargo room for groceries or some soft luggage for a couple of people, and when the bumper-height floor panel is removed, it exposes a bit more space. When the rear seats are folded, cargo capacity expands from 17.5 cubic feet to 47.9 cubic feet.

Controls are typical of the Mini family, with a round display in the center of the dash that houses audio, vehicle-information, and rear-camera displays on a 6.5-inch screen. A central controller on the console uses a mix of buttons and a rotating dial to work through the system menus that appear on the screen. It takes multiple steps to get things done; this is essentially parent BMW’s iDrive. (The only thing that reduced this driver’s time to input the audio settings he wanted was that he had just come out of testing a BMW 540i and was still familiar with the drill.) Toggle switches for things like the starter and traction-control activation are aligned in a row low on the instrument panel. The standard automatic dual-zone climate system has separate dials, so it is blessedly free of the central controller. Round tachometer and speedometer dials rest directly ahead of the driver. Legibility suffers a little because the numbers are somewhat small and closely spaced on the gauge faces.

This Clubman with the Works has a starting price of $35,100, but when the counting was done on the test car, its tab with delivery came to $40,250. Extra-cost Melting Silver metallic paint, Dynamic Damper Control, and satellite radio pushed up the cost. So did the Cold Weather Package with heated front seats, and the Technology Package with navigation, wireless Qi smartphone charging, a head-up instrument display, and more. However, if you want one with everything on it, trimmings like an eight-speed automatic transmission, double-pane sunroof, Harmon Kardon audio, and leather upholstery are still there to be ladled on. Minis may be small but their price tags often aren’t. 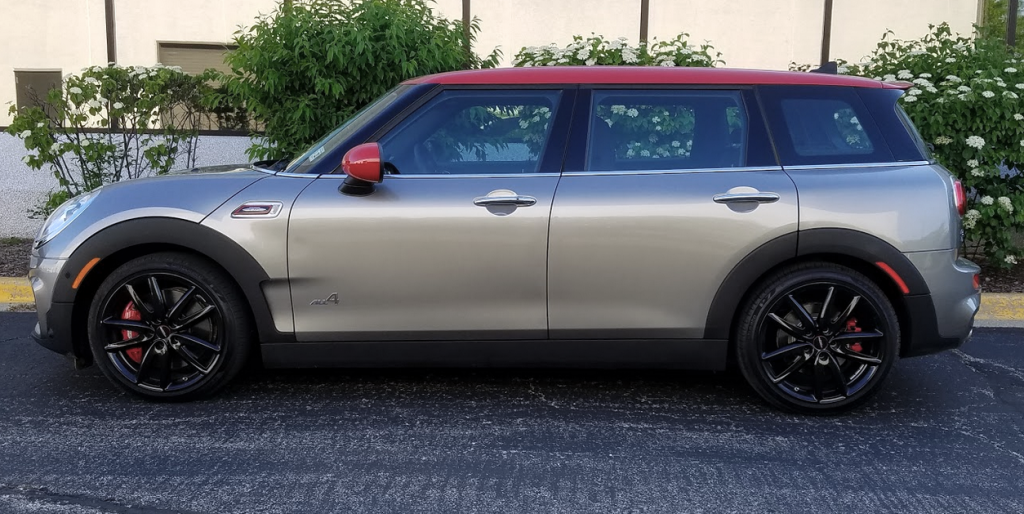