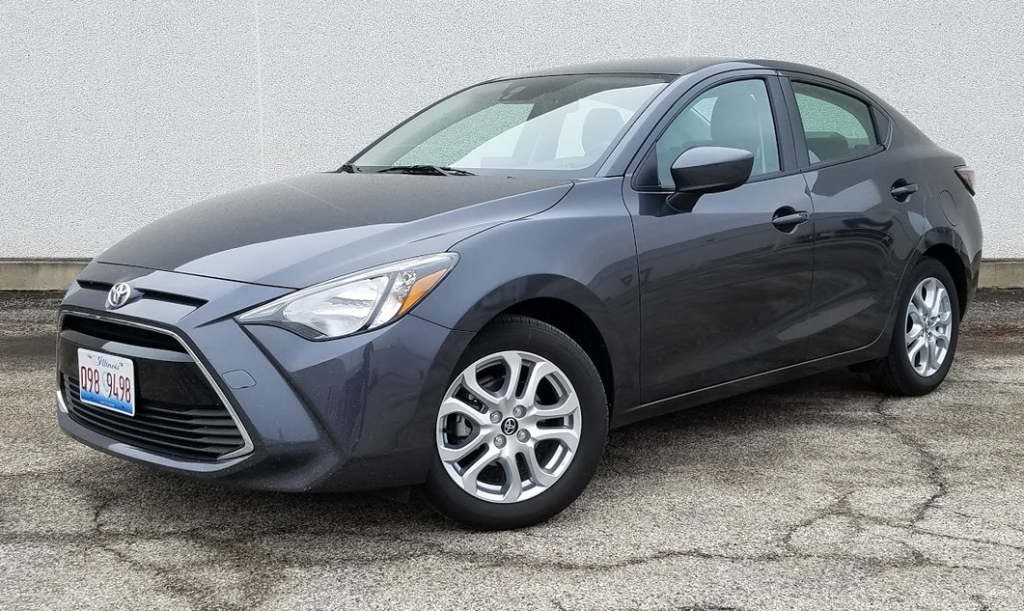 The not so good: Limited small-item storage

For such a straightforward little car, the Toyota Yaris iA sure has a complicated backstory. Thanks to a partnership between Toyota and Mazda, the iA is essentially a restyled version of the subcompact Mazda sells outside the USA as the Mazda 2. When the four-door sedan first came to market in 2016, it did so as the Scion iA, one of the last new products to come from Toyota Motor Corporation’s “youth brand” that was folded up at the end of the ’16 model year. Now the iA has been turned into a full-fledged Toyota but it is being associated with the Yaris, a subcompact hatchback with which it shares an engine but little else. 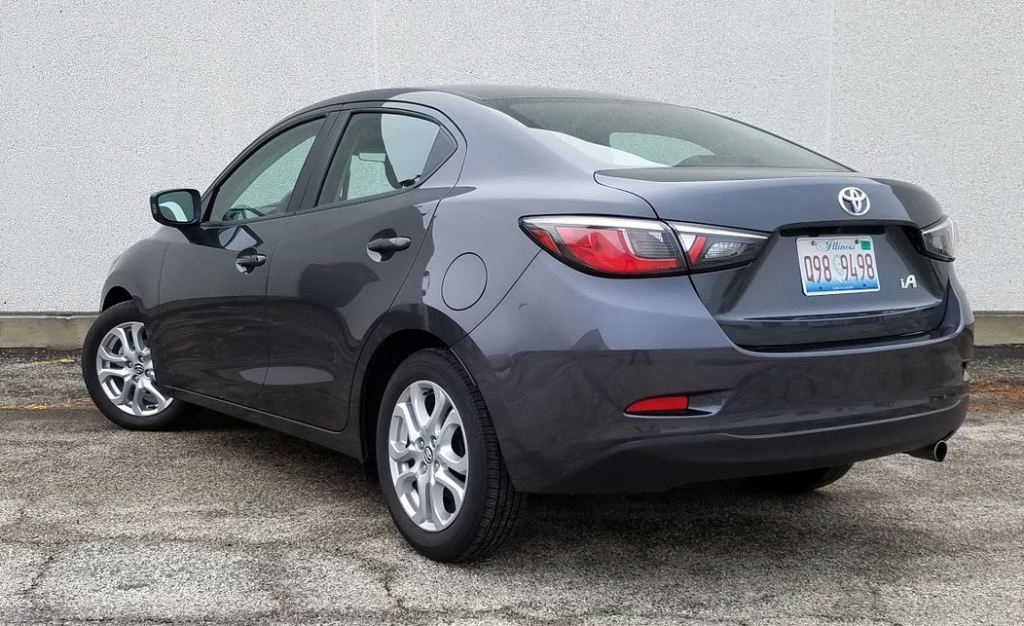 Far simpler is the car’s execution. There is a single powerplant, a 106-horsepower, 1.5-liter direct-injection 4-cylinder, driving the front wheels. There is just one trim level, and the only factory option (there are dealer-installed appearance and convenience accessories) is an $1100 6-speed automatic transmission for those who don’t want to work through the standard manually operated 6-speed gearbox. To further un-complicate matters in 2017, about the only thing that changes is the switch to Toyota badging.

Having tested a Scion iA with the automatic, Consumer Guide® editors experienced a trans-formation of sorts when they got to drive a Toyota Yaris iA with the stickshift. Some inexpensive cars with manual transmissions have extremely light clutches and/or rubbery and imprecise shift action. Not so the iA. There’s enough resistance in the clutch pedal that helps make shifts a little more precise and, thus, power application a little smoother and brisker. Shifter throws are somewhat long, but the lever generally finds the desired gate without much fumbling by the driver.

The cabin layout and materials are quite nice, considering the Yaris iA’s penny-pinching price point. The front seat can accommodate plus-size passengers, but the rear seat will be cramped at best for most average-size adults.

The engine’s power figures don’t look overwhelming, but the little mill manages to keep up well enough to spare drivers from constant downshifting any time the traffic pace experiences a little hiccup. It is a little loud under acceleration though. If you are looking for a silver lining, you can think of that engine noise as the sound of savings. EPA fuel-economy estimates for the manual-shift iA are 30 mpg in city driving, 34 on the highway, and 37 combined. (Note that these numbers are slightly better with the automatic.) However, this reviewer chalked up 42.6 mpg after driving the test car for 173 miles, 60 percent of that under city conditions. That’s a good 6-mpg improvement over his somewhat more city-biased turn in the ’16 with automatic.

Having made the point that the ’17 Toyota Yaris iA is, in effect, the ’16 Scion iA, we’ll give you a quick reminder of what that means in terms of equipment and accommodations. Standard exterior features include 16-inch alloy wheels and chrome exhaust tips. Convenience and comfort gear runs to automatic climate control; power windows, mirrors, and remote locks; keyless entry and push-button starting; AM/FM/HD 6-speaker radio; tilt-telescoping steering wheel with audio controls; and height-adjustable driver’s seat. Tech items of note are a 7-inch multimedia touchscreen with remote-programming capability, app-enabled audio services (Aha, Pandora, and Stitcher), two USB ports and an auxiliary-input jack, Bluetooth hands-free phone connectivity, a rearview camera, and a low-speed collision warning/mitigation system.

Despite some intruding wheel wells, the Yaris iA offers decent trunk space for a subcompact sedan. Folding rear seat backs improve cargo versatility, but they rest about five inches above the level of the trunk floor.

Controls betray the iA’s Mazda origin. The instrument panel is a match for the one in the CX-3 subcompact crossover, with the same large central speedometer flanked by little “wings” that house ancillary gauges. Another Mazda touch is the console-mounted Commander Control dial. Unfortunately, this attention-demanding device is the only way into the audio system and a few other functions. The three-dial climate system is much simpler to use.

Interior materials and surfaces look a little plusher than they actually are. The cloth seats, attractively done with blue woven inserts in the cushions and backrests, offer good comfort and support. The application of padded or soft interior surfaces is limited, though. On the doors there’s a patch of cloth in the centers and some thin padding on the front-door armrests. Otherwise, hard plastic abounds on most other surfaces except for a vinyl-covered padded strip through the middle of the dash. 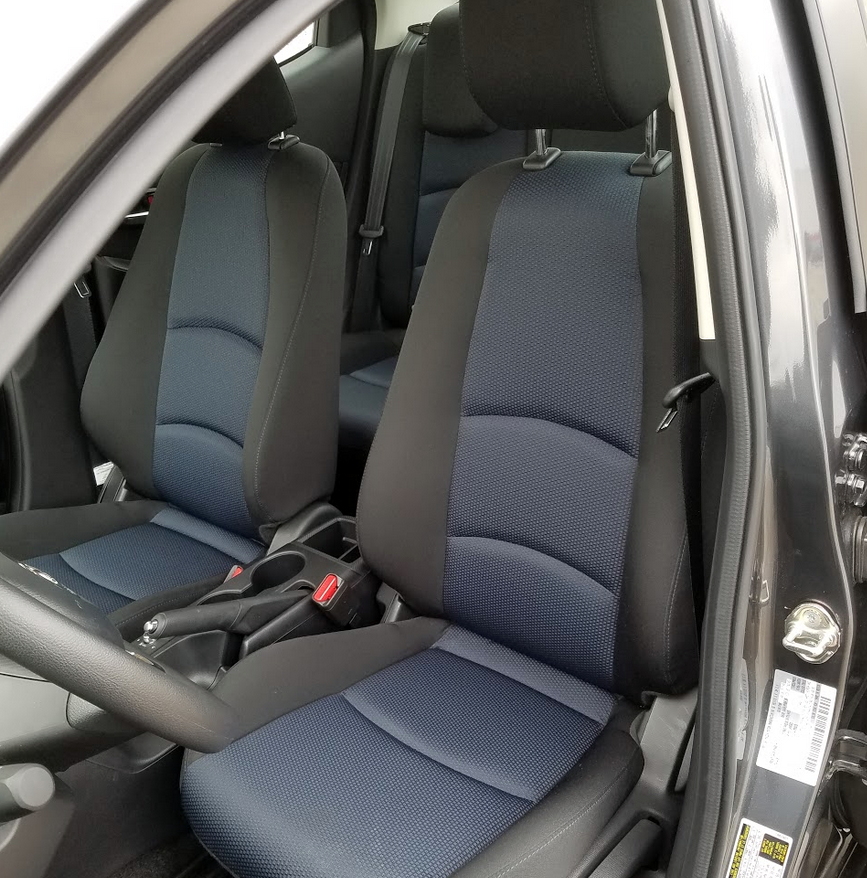 The front seats offer decent comfort and support, but some testers find the padding to be a bit on the spongy side… and lament the lack of a center armrest.

Cabin storage is somewhat dear as well. There’s a modest glove box, a large console bin (the digital-device ports are found here), two open cup holders in the console, and a small open space at the rear of the console for the benefit of rear-seat passengers. The only other provision for back-row occupants is a pouch on the back of the front passenger seat. Only the front doors come with small map pockets and bottle holders.

Drivers should be able to work the 4-way-adjustable seat and tilt steering wheel to find the right spot. Head- and legroom aren’t bad up front. Rear legroom is—no surprise here—limited. If the front passengers don’t take up too much room, adults in the rear will sit in a knees-up posture with their shins up to the seat ahead. Headroom isn’t as deep in back, either.

Room in the trunk is actually pretty good for such a tiny car. Once you clear the high lip around the opening there’s a wide, flat floor, and a fairly tall and deep space. The rear seats fold in a 60/40 split but they settle a good five inches above the level of the trunk floor, and a bulkhead behind the seats further restricts the size of items that can be extended into this extra space.

On the road, the Yaris iA’s modest footprint makes it easy to maneuver in confined spaces. Steering is light but still pleasingly direct. Don’t expect a limousine ride from so short a chassis, but you may be impressed by the lack of vibration over pavement that consists of more asphalt than pothole.

That’s what $16,815 (with delivery) can buy you. If the object is good basic transportation, it seems like money well spent.

The Yaris iA is a delightful little subcompact sedan that’s let down a bit by the “one equipment level fits all” philosophy that was carried over from its lone model year as a Scion. In order to offer an attractive level of desirable, purchase-influencing features at its penny-pinching sub-$17K price point, the Yaris iA is missing a couple key pieces of everyday equipment for which I would gladly pay extra—if only they were offered.

The fact that the iA boasts a low-speed pre-collision system—a safety feature that can detect large objects about 30 feet ahead when the vehicle is traveling between 2 and 18 miles per hour, emit audio and visual warnings, and automatically apply the brakes if the driver doesn’t—is fabulous, especially for such a low-priced vehicle. Uhhh… could it have cost that much more to throw in a right-side driver’s seat armrest, or a console bin with a padded armrest cover?

Likewise, the keyless push-button starting feature is not that much of a plus—since there are no lock/unlock buttons on the exterior door handles, you have to fish the key fob out of your pocket or purse to lock or unlock the car anyway. Same deal with the trunk… there is no external trunk release button, so you’ve got to use the key-fob button for that too. The design of the rear-seat headrests is such that you have to flip the seatbacks down to gain enough clearance to slide the headrests out, and the only release latches for the seatbacks are in the trunk—not inside the vehicle. (I found this out the hard way when I was installing my kids’ car seats.)

Hopefully, Toyota will see fit to loosen up the no-options philosophy on the Yaris iA for 2018 and make equipment available that will correct these nitpicks. Even if that gear adds a few hundred dollars or more to the iA’s sticker price, this car will still be a real bargain. All our editors saw outstanding fuel-economy numbers, and despite its modest power, the iA is a surprisingly fun car to drive in a spirited fashion. The badges might say Toyota, but the Mazda “zoom-zoom” origin of this car is apparent.

That gaping-maw grille is a bit much for some of our editors’ tastes, but the Yaris iA’s tidy dimensions and crisp, swoopy body lines make for an attractive profile view.