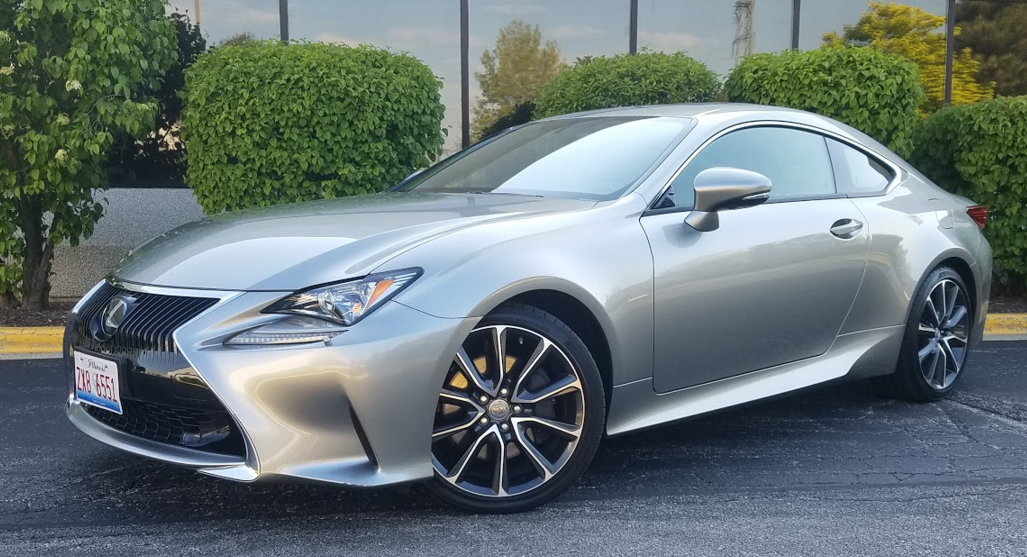 The not so good: Rear-seat room, infotainment/climate controls 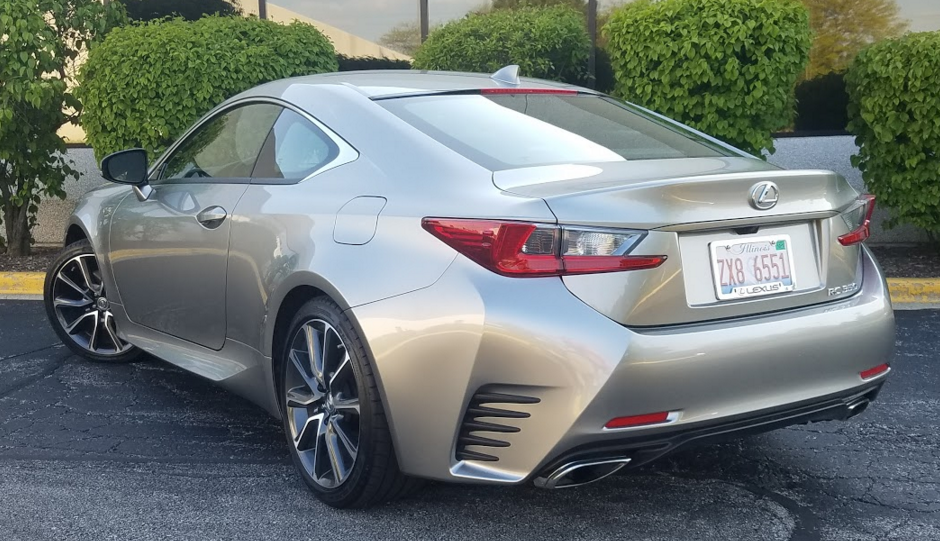 Ours was a rear-drive version, but the V6-powered Lexus RC 350 is also available with all-wheel drive — and with turbo four and V8 engines.

We previously tested the entry-level Lexus RC 200t with its turbocharged 4-cylinder engine and the range-topping RC F with its potent V8, but we think most will find this RC 350’s combination of V6 power and reasonable price to be juuuuuuust right.

Or perhaps we should say that the V6 models should be about right. The RC 350 comes in rear- or all-wheel-drive form, both sporting a 306-horsepower 3.5-liter V6 and 8-speed automatic transmission. (This test is of the rear-drive version.) But there’s also the RC 300, which has a detuned, 255-horsepower version of the 3.5-liter V6 and 6-speed automatic transmission, and it comes only with all-wheel drive. All models also offer an F Sport variant with sportier features.

While the 2.0t suffers a bit of typical turbo lag in some situations, the RC 350 does not. Nail the gas from a stop, and it jumps; hit it while underway, and the transmission kicks down fairly quickly for great passing response, accompanied by a sporty growl from the engine. Magnify all this by about 1.5 times, and you have the RC F. Otherwise, the cars are quite similar. 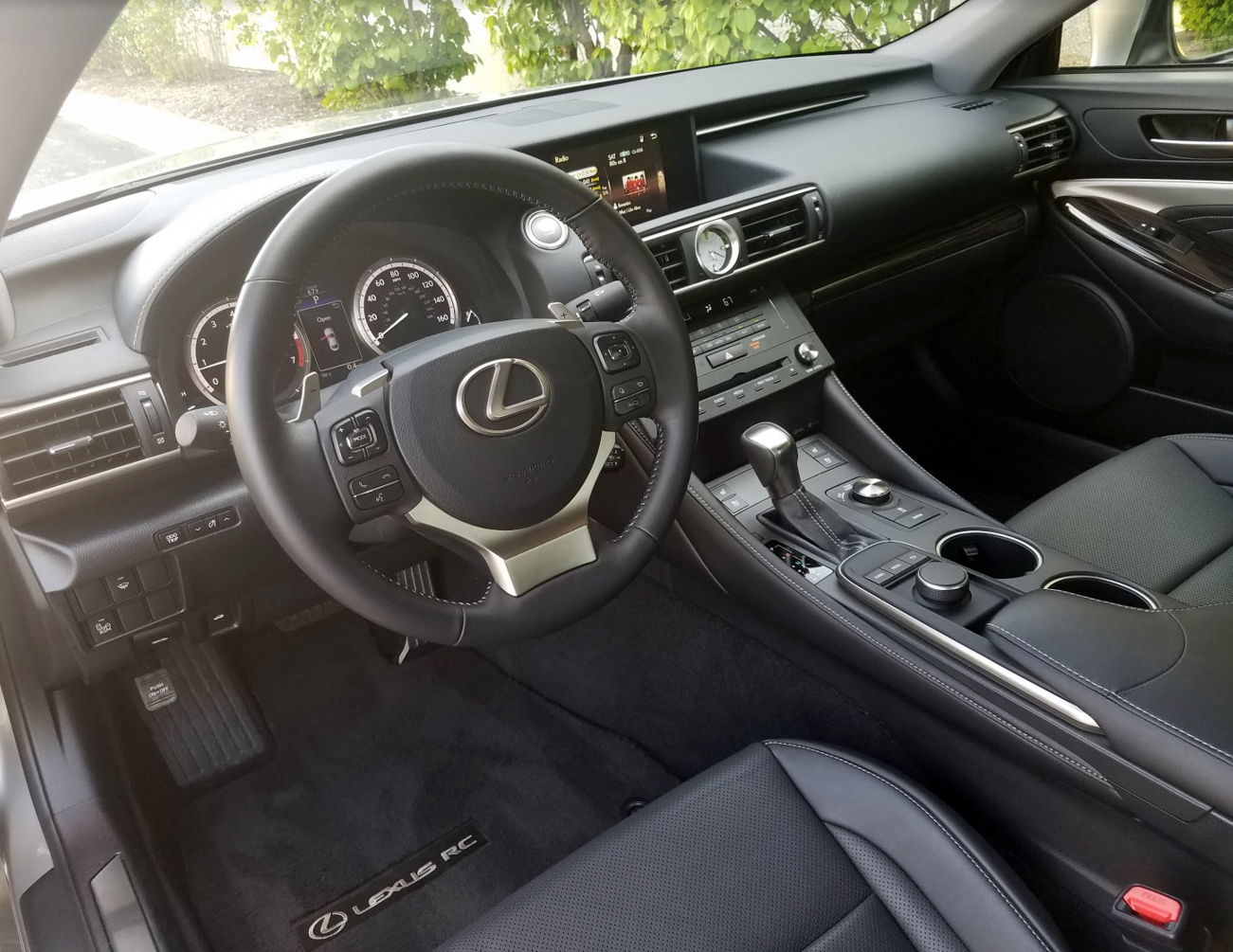 Though it’s nicely appointed, the RC 350’s interior suffers from minimal storage space and some quirky controls. The cabin is comfortable for front-seat passengers; less so for those stuck in back.

Some things that jumped out about the RC 350, a few of which we’ve noted in earlier tests:

One thing we noticed that was different about this RC compared to others we’ve tested was the infotainment controls. Since our test vehicle wasn’t equipped with the optional navigation system and the Lexus Remote Touchpad controller, it had an simple console knob with three auxiliary buttons. It still often took multiple steps to get what you wanted, but we found it easier to use than the Remote Touchpad interface. Climate controls consisted of an awkward-to-use temperature “slider” and repetitive-step pushbuttons for mode and fan speed. 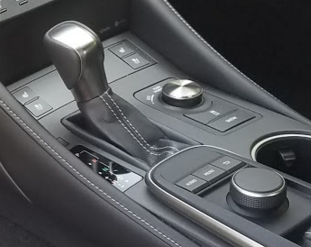 At bottom right is the standard console control knob topped by three buttons (Menu, Audio, and Back). Most of our editors prefer this setup over the optional–and often finicky–Lexus Remote Touchpad system.

Coupes inherently come with several sacrifices for their sporty looks, and the RC — in any version — is no exception. But when compared to its rivals, it offers quite a bit for the money … in any of its various forms.

You can admire the Lexus RC 350 for a number of things. There’s the rakish profile, the exact handling, and the fine powertrain. Cabin style is attractive without being overstuffed or fussy. Without the Lexus Remote Touchpad controller on the console—the test car had a simple dial to enable radio presents, which could be scrolled through via steering-wheel buttons—there was less diversion from the business of driving.

You can also not admire the RC 350 for a few other things. Rear-seat passenger room is just a notion, driver vision is hampered a bit by the low roofline, and wet grip with the optional summer tires that were on the test car can be lacking. This driver experienced a couple of rear-end slips while making simple turns on town streets after a rainfall. He also averaged 23.9 mpg after a trip of 245.7 miles that included 24 percent city-type driving—enough to surpass the EPA combined-mileage estimate but still a ways from the EPA highway projection of 28 mpg.

The RC350 is hardly practical but it is expressive and generally well executed, especially as Consumer Guide’s test car was equipped. At a price still south of $50,000 it is worth the consideration of shoppers in this tightly specific market niche.

Certainly a coupe profile has its visual merits, but those long doors can hinder egress in tight spaces, and the sloping roofline doesn’t do much for rear-seat headroom. But if those trade-offs are worth it to you, the Lexus RC coupe — in any configuration — is a fine choice in the premium league.