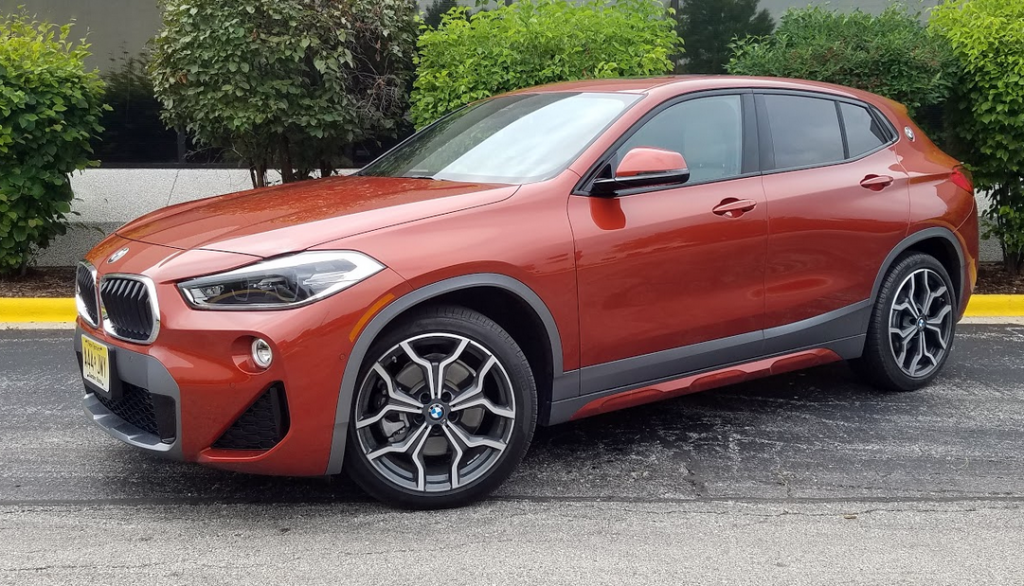 The not so good: Price premium over X1 sibling; spendy options; lower roofline cuts into passenger and cargo room

Considering all the things the human population of Earth could be lacking, at least compact sport-utility vehicles won’t be one of them. Why, just for the 2018 model year alone the class welcomes newcomers Chevrolet Equinox and GMC Terrain (newly reduced from their former midsized selves), while the premium level swells with the Alfa Romeo Stelvio, Jaguar E-Pace, Range Rover Velar, and BMW X2. Between the two grades there are now 40 entries in the segment in the U.S.—plenty to go around. 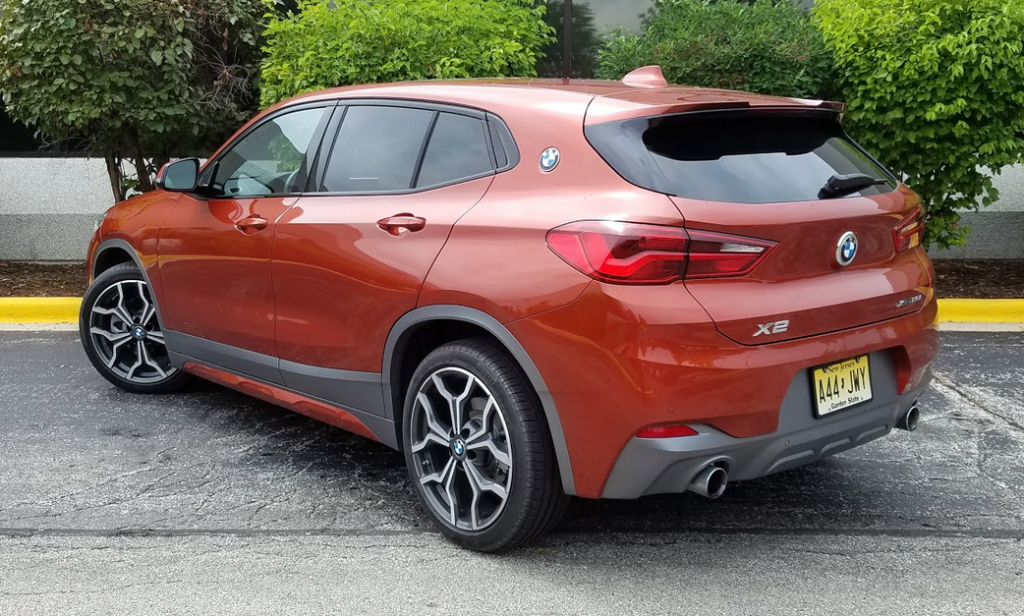 Our X2 test vehicle was equipped with the M SportX Package, which includes special trim (including “Shadowline” exterior trim) and features such as sport seats, power-folding mirrors, and a panoramic sunroof.

Among the premium brands, BMW is particularly well represented as the purveyor of Xs 1 through 4. As mentioned, the X2 is the newest of them—so new, in fact, that it wasn’t even formally announced until the Detroit Auto Show in January, a time by which virtually all other 2018 vehicles were already in showrooms. Its particular job is to be the high-style alternative to the mechanically similar X1, which it does at the expense of some practicality. Oh, and BMW charges about $2500 more for it as well.

The X2’s cabin exudes upscale European sophistication. As expected, passenger headroom is compromised a bit by the low roofline, but there is still decent space in both the front and back seats for average-sized adults.

The X2 wards off a degree of SUV boxiness by standing 2.8 inches lower than an X1. It’s also 3.2 inches shorter nose to tail. Taken together, these alterations squeeze some passenger and cargo space from the X2, which starts at $37,395 with delivery for a front-wheel-drive example or $39,395 with xDrive all-wheel drive like the one tested by Consumer Guide editors. Wheelbase is the same for both vehicles—105.1 inches—but the trimmer X2 has a marginally tighter turning diameter than the X1.

There’s a pattern to BMW’s X-model numbering. The odd-number vehicles are classed as “sports activity vehicles” while even-number jobs are considered “sports activity coupes” (even though they have four doors). The X4 and midsize X6 sport sloping fastback roofs that give them an almost carlike profile, but the X2 has a more upright miniwagon silhouette. The X2 holds 50.1 cubic feet of stuff, however that’s still a loss of 8.6 cubic feet compared to the X1. Cargo loads over a slight lip onto a flat floor. Even with the rear seats up the space is helpfully large, and the floor consists of a folding panel that exposes a lower storage compartment or can be fully removed to create more overall space. Rear 40/20/40 seats fold nearly flat to expand cargo capacity, but if the floor panel is removed there will be a considerable drop-off behind the seats, and a higher lift when unloading through the rear hatch.

The X2 is powered by the X1’s turbocharged 2.0-liter 4-cylinder engine that makes 228 horsepower and 258 lb-ft of torque. It’s not a total tiger off the line but it’s hardly slow considering that the torque finds its peak fairly quickly. Actually, this driver was more impressed by its open-road performance. Late-night runs on lightly populated expressways allowed the X2 to go fast for a sustained period, which it did without apparent strain. The 8-speed automatic transmission is excellent for its smoothness, and the test vehicle was optioned with the M SportX Package that includes a faster-shifting version of this gearbox. 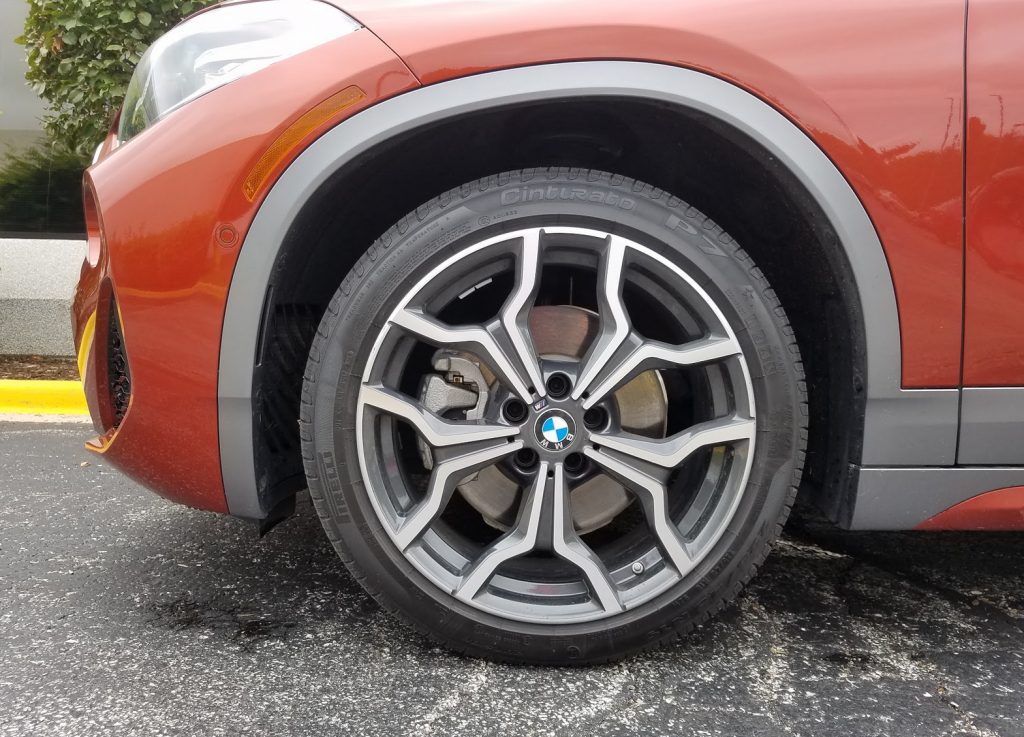 The speedier runs also reduced this reviewer’s exposure to city-type driving conditions to 35 percent of the 188 miles he covered. From that he averaged 27.02 mpg, which exceeded the EPA’s combined-mileage estimate of 25 mpg. The xDrive X2 is rated at 21 mpg in city driving and 31 mpg in highway use.

Ride is pretty good almost all of the time—it takes a serious pavement disturbance to truly upset the X2. Shooting into some quick turns brought on a little bit of understeer but the trucklet didn’t feel punch drunk as it regained its footing. Light but still fairly direct steering gets incrementally better in “Sport” mode.

The cabin in CG’s test vehicle had a high-style look with Oyster and Black artificial leather on the seats, door panels, and instrument panel. Padded soft surfaces were liberally applied, even running along the passenger side of the center console. The M SportX group included sport seats that unfortunately reminded this driver of the somewhat uncomfortable ones he previously encountered in a 640i Gran Turismo. Head- and legroom were good in front. A couple of average-sized adults will find passable legroom in back, and a little less overhead space than their front-seat counterparts.

Gauges and other driving controls are displayed well, though the otherwise-bright head-up display from the Premium Package option group almost completely disappears when the driver is wearing polarized sunglasses. Temperature settings are easily made through twist-dial knobs, but fan speed and mode require some button pushing. In an apparent zen flash that even he can’t believe happened, this driver immediately get the hang of inputting radio presets through the iDrive infotainment control on the console, but it still takes multiple steps, and operating the controller or its menu while driving remains too attention-intensive. Thick roof pillars diminish side and rear-corner vision.

For storage, there is a good-sized glove box plus a handy covered bin to left of the steering column. There is no enclosed console box, but an open area is available beneath a flip-up center armrest. The armrest itself opens, and it houses the optional wireless charger when ordered. There are good-sized pockets with bottle holders in the doors, net pouches on the backs of the front seats, and a net pouch and 12-volt power point on the right side of the cargo bay. Pairs of covered cup holders are found in the console and the central rear-seat armrest.

CG’s test vehicle topped out at $50,920 with options. It is curious, though, that some of those extras continue to be things like Apple CarPlay, heated front seats, and satellite radio—all of which came standard on a Toyota Corolla Hatchback we recently tested, and it cost 25 grand. Whether or not the X2 is the best deal in the premium compact-crossover field, there are probably enough style-conscious buyers in that huge segment to make it a worthwhile proposition for BMW.

The X2 value equation compared to its X1 sibling is a fairly simple one–if you place a high priority on sleek, sexy styling and don’t mind the corresponding compromises in practicality, then the X2 is worth its price premium.