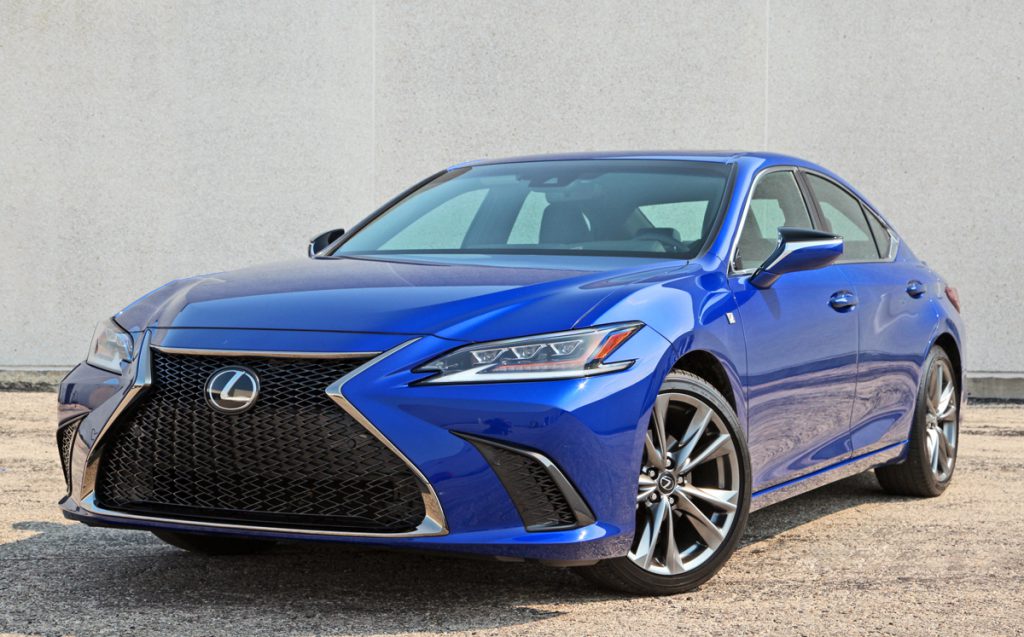 The great: Smooth, satisfying V6 acceleration; generous level of comfort and safety features for the price

The not so good: Touchpad infotainment interface, while improved over the outgoing model, is still rather finicky; rear seat backs don’t fold

Lexus has done just fine selling the ES premium-midsize sedan for years without need for a sport model. Now, though, Toyota’s luxury brand is ready to change that as it ushers the seventh-generation ES into showrooms for the 2019 model year.

Lexus did not turn its sensible-shoes ES into an uncompromising muscle car. There is no full-blooded F version like some of the brand’s product lines have. Rather, the warmed-up ES is an F Sport, which means it has some enhanced features that allow it to behave a little more athletically without scaring the bejabbers out of anyone who just wants a nice luxury-brand car with famously accommodating customer service. Plus, there’s still an ES 350 without F Sport gear and a 300h hybrid model. 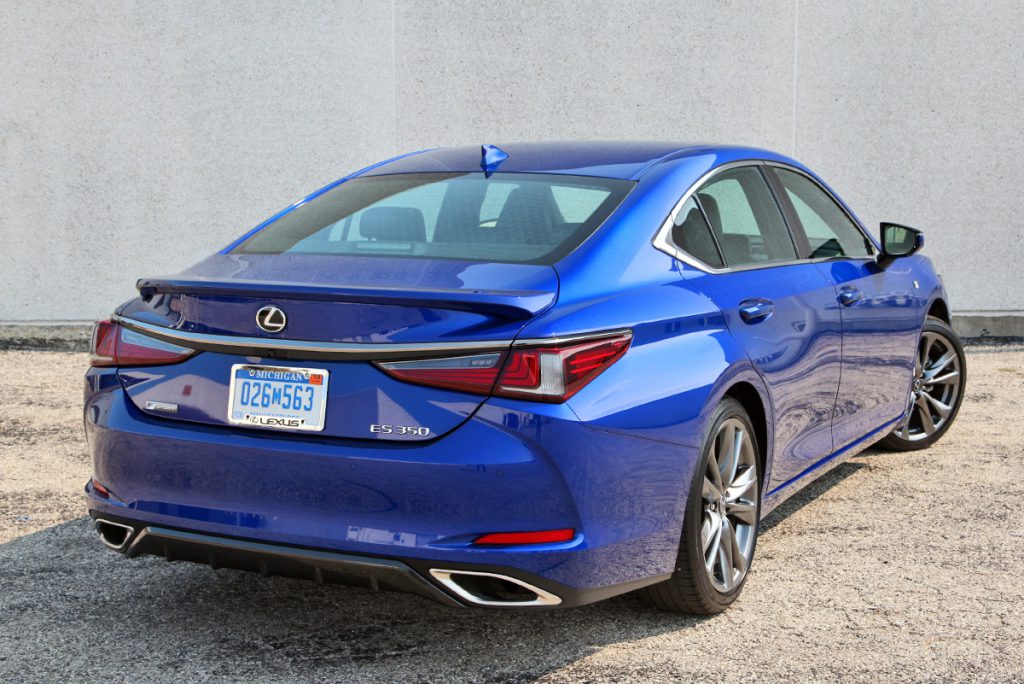 The ES 350 F Sport’s exterior styling touches include special badging, a unique grille and front and rear bumpers, a rear spoiler, and 19-inch wheels with a dark metallic finish.

The ’19 ES 350 F Sport that Consumer Guide tested in late summer 2018 was a preproduction model that arrived months before a couple of its highlight tech features were available. Apple CarPlay smartphone compatibility—its first use by Lexus—was expected to be added as a standard feature soon after the car’s fall launch. (Note that there is no matching Android Auto connectivity as in most other cars.) Also new is Amazon Alexa 2-way car-to-home and home-to-car communication capability through Android phones, but iPhone compatibility for this was expected to be added within a few months of the car’s showroom debut.

Still exclusively driven through the front wheels—indeed, it’s the only member of its size/price class that doesn’t have an all-wheel-drive version—this latest ES is built on a new Lexus Global Architecture-K platform. Wheelbase grows a couple of inches to 113 inches. Overall length and width are greater, too, and front and rear wheel tracks are spread out nearer to the corners. Lexus says this framework is more rigid than that of prior ESes and utilizes more precise assembly methods, which make it possible to finally offer a sportier version.

The ES’s upscale interior takes on a pleasantly sporty ambiance in F Sport trim. The redesigned dashboard is highlighted by an especially large infotainment screen. The rear seat is spacious enough for adults to ride in comfort.

Another link to ES tradition is a V6 engine for 350 models. For 2019 the 3.5-liter powerplant has been reworked to make 302 horsepower at 6600 rpm and 267 lb-ft of torque at 4700 revs, gains of 34 ponies and 19 lb-ft. The sole transmission is a new 8-speed “Direct Shift” automatic designed to deliver zippier launches while also improving highway fuel economy. It replaces a 6-speed unit. 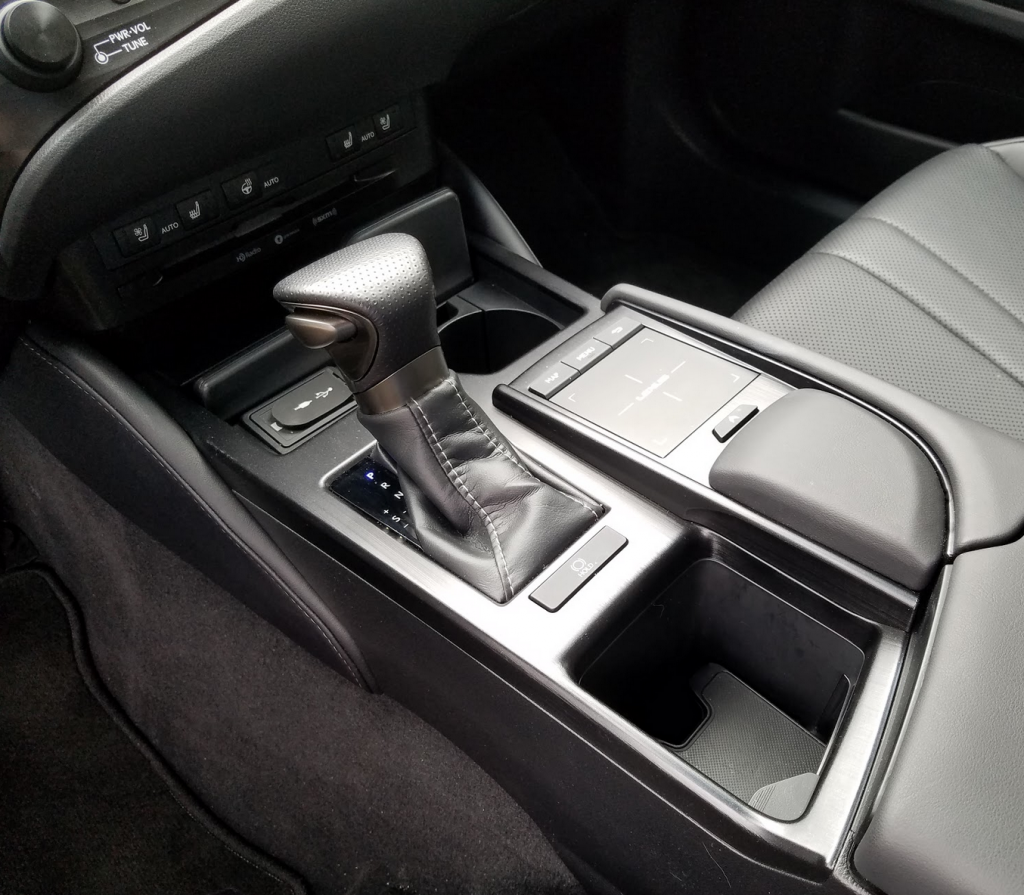 The center console’s handy “squared-off” cup holder makes a great cellphone holder as well. On the right side of the console is the ES’s touchpad infotainment interface, which we’re not particularly fond of.

All things considered, then, the F Sport’s extra degree of zest hangs on driving dynamics. The test car rode nicely and handled easily. Sport and Sport+ make subtle positive changes to ride firmness and steering resistance for slightly better car control, but still allow the driver to slip back into the historically comfort-oriented nature of the ES. (“Normal,” “Custom,” and “Eco” are the other available mode settings.)

The V6’s extra power is welcome—it certainly exceeds the lukewarmth radiated by its predecessor—for better standing-start acceleration and confident highway demeanor. The new transmission does its part fairly subtly, and it kicks down smartly to enable calls for passing power. EPA fuel-economy estimates for this powerteam are 22 mpg in city driving, 31 on the highway, and 25 combined. This driver’s run of 197 miles, with 45 percent city-type operation, yielded 24.2 mpg.

The 2019 redesign comes with a roof design that is marginally lower than before, but Lexus says it made changes to the seat and headliner to preserve headroom in back—which it does indeed seem to have accomplished. Rear-seat legroom is great for the class, and three adults could squeeze in, provided the middle rider is cool with straddling the floor tunnel. There’s good leg- and headroom in front. Drivers will find good vision all around because relatively thin pillars present minimal obstruction. 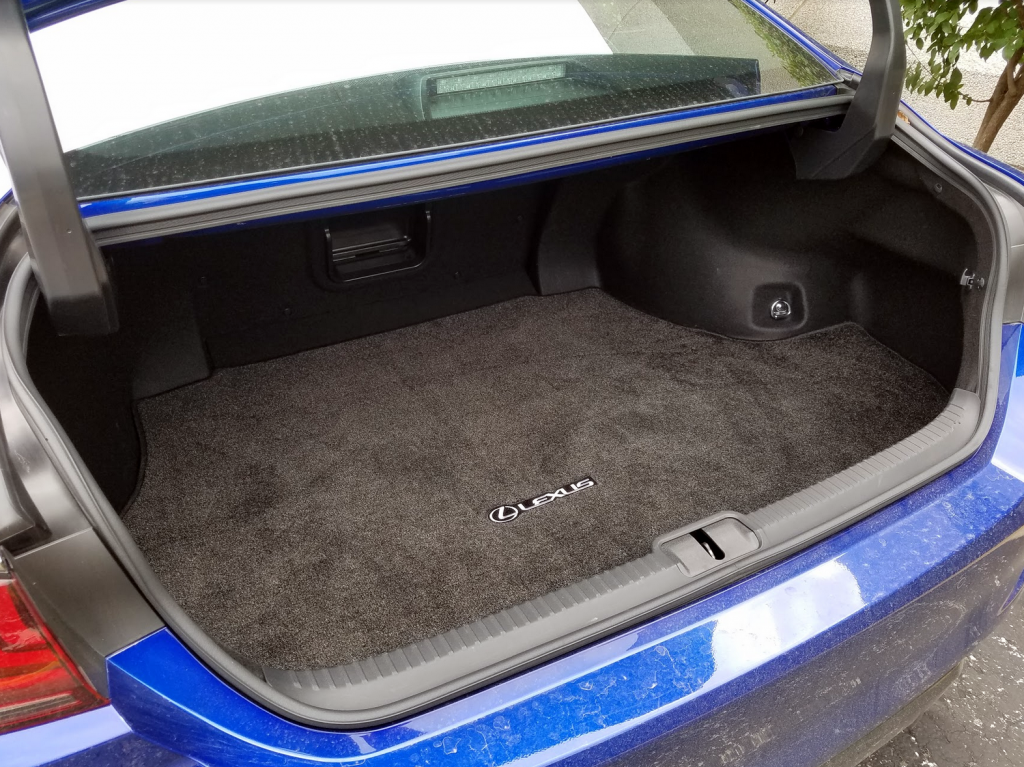 The ES’s trunk offers a respectable 16.7 cubic feet of cargo space, but the rear seat backs don’t fold–there is only a small cargo pass-through for long items.

Trunk space comes out to 16.7 cubic feet—not half bad, but it’s all that you’ll get because the rear seat backs do not fold as in many midsized cars. However, there is a central pass-through in the rear seat. The flat trunk floor is full width toward the back but narrows some between the wheel houses. Gooseneck hinges intrude into the trunk space but they are covered in plastic to keep them from fouling cargo. The F Sport comes with a hands-free power trunklid.

There’s a completely redesigned interior with a new instrument panel and updated infotainment controls. Lexus has moved—slightly—from a mouselike console controller to manipulate audio and other settings on the display screen to a console touchpad (almost a “touchpan”) that operates a little more directly but still is no triumph for ease. Moving the mouse to correlate to areas on the display screen was often hard to do with precision, especially when driving. It’s a little quicker to just tap the appropriate quadrant of the new pad, but there’s a still lot of additional tapping in order to input settings, all of which can distract from driving.

The new display screen is a big 12.3-inch unit that shows up well. The standard dual-zone automatic climate system relies on flipper-type levers for temperature settings and repetitive-step push buttons for fan speed and mode. These controls are conveniently placed but seat heat/ventilation controls are tucked down a little out of the way beneath where the instrument panel passes over the console.

A sophisticated cabin includes lots of soft-touch surfaces and brushed-metal trim on the dash and doors. For storage there are pockets in all four doors, a usefully sized glove box, a passable console box, a pullout bin to the left of the steering column, two covered cup holders in the console, hard-sided pouches on backs of the front seats, and cup holders in the pull-down rear armrest.

Lexus can’t be faulted for wanting to liven up the ES with the F Sport. Neither, though, can it be faulted for keeping even the sporty model from straying too far from what has been the ES’s formula for success. 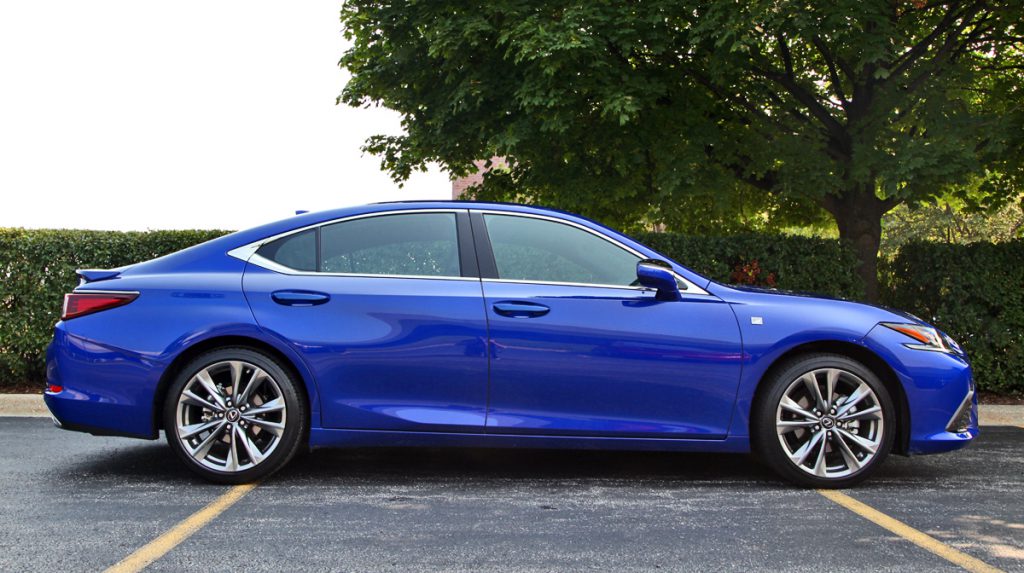 The Lexus ES lineup’s excellent redesign for 2019–and the new F Sport model–add a more engaging, dynamic personality to a car that has long been one of the best in its class for simple, understated luxury and comfort.

What’s new for the Chrysler 300