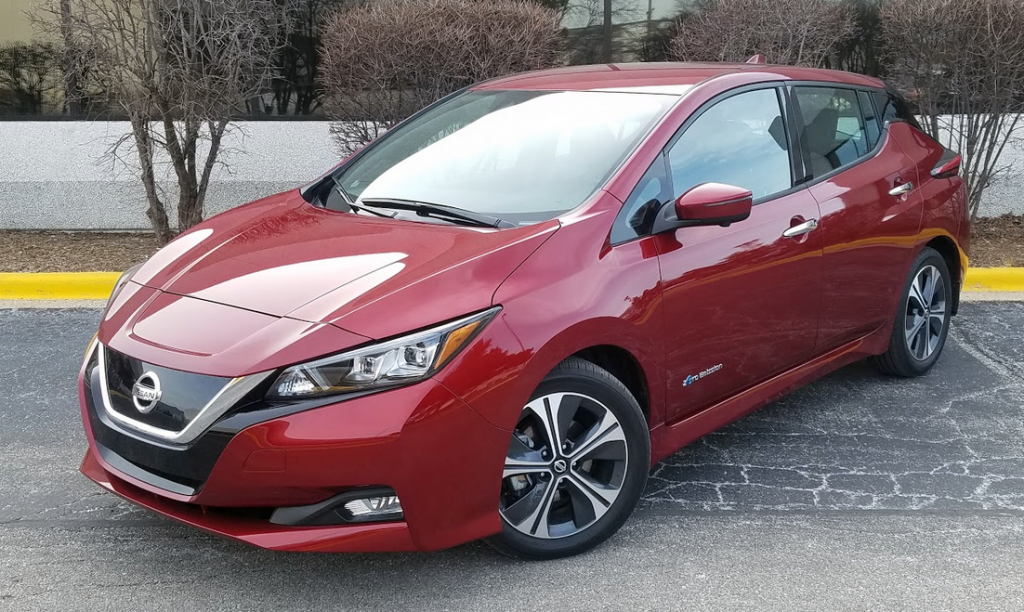 The not so good: Maximum driving range doesn’t match the Bolt EV

This redesigned compact EV wears fresh styling inside and out and new technology features, but with lower sticker prices. Consumer Guide® tested an SL, the top of the three-model Leaf family, with a base price of $36,200. That represents a $590 reduction from the 2017 SL. 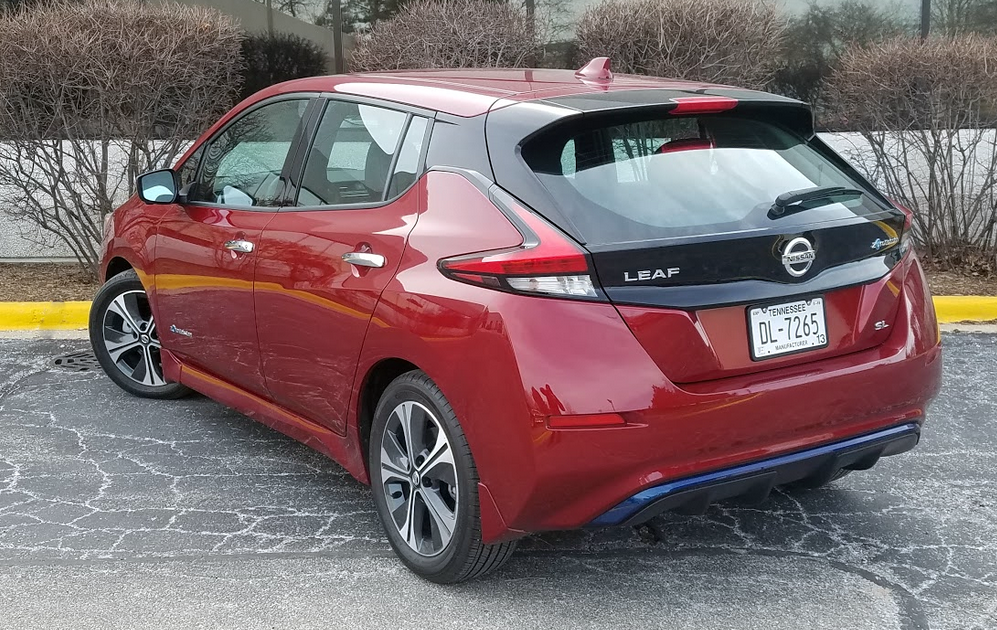 The Leaf’s looks get decidedly sportier and more aggressive with the 2018 redesign. SV and SL models come standard with 17-inch alloy wheels; heated exterior mirrors are standard on SL and optional on S and SV models.

The 110-kW motor in the 2018 Leaf is rated at 147 horsepower and 236 instant-acting lb-ft of torque, considerable improvements from 107 and 187, respectively, in 2017. However, anyone interested in electric cars is understandably focused on range. A more capacious 40-kWh lithium-ion battery lasts for a best-case-scenario 151 miles according to the EPA—a substantial jump from 107 miles previously. However, as the window sticker presciently notes, “Actual range may vary with driving conditions.”

The Leaf’s dashboard layout is a mix of the conventional (an ordinary-looking analog speedometer) and the unconventional (a quirky shift “nub” instead of a lever). Nissan’s “e-Pedal” feature dials in aggressive regenerative-braking settings, which enables practiced drivers to barely use the brake pedal at all. Rear-seat room is competitive with most compact hatchbacks, and the top-line SL trim’s leather upholstery lends an upscale feel.

This reviewer’s driving conditions included air temperatures in the high 20s to high 30s and some periods of high-speed expressway operation (though the overall mix included 59 percent city-type driving). Both of these factors can shave the longevity of a charge. Also, comfort and safety needs called into play the heater, radio, and—briefly—headlights. As such, he got 114.8 miles from one full charge, with an indicated seven percent of battery life and 12 miles of range remaining. With the Leaf fully “fueled” again, he drove another 56.5 miles before turning the car in with 59 percent of charge and a reported 94 miles of range in reserve. 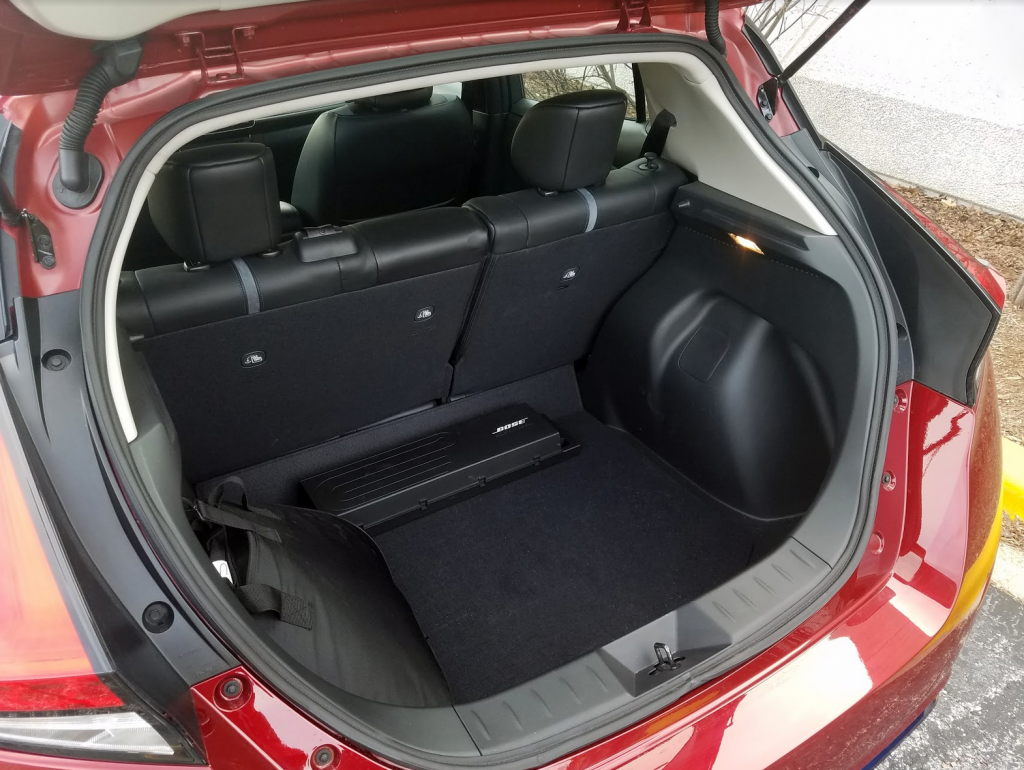 The new Leaf offers a respectable 23.6 cubic feet of cargo space behind the rear seat, thanks in part to a surprisingly deep load floor. The subwoofer for the Bose audio system is mounted just behind the rear seats, and a canvas bag is supplied for the charge cable (the bag can be secured to the side of the cargo area via the included retainer strap/carabiner clip).

The Leaf operates in either “Eco,” “B,” or straightforward “Drive” modes. Eco holds down power output and climate-system function (switching out of it reduces calculated range estimates by a few miles), but is fine for saving a little battery life during in-town driving when speed isn’t of the essence. B mode increases the energy returned to the battery during braking and helps reduce brake use, a boon when driving downhill. Drive gives vent to the motor’s full power. Indeed, an on-the-fly switch on the highway from Eco to Drive will make you wonder if the Leaf comes with a jet afterburner. (It doesn’t.)

Activating Nissan’s e-Pedal feature—via a switch on the console—lets the driver start, accelerate, decelerate, or even stop depending on how the accelerator pedal is used. When the pedal is released all the way, regenerative and friction brakes are applied automatically. If the driver times things right, the car will come to a complete stop without need of the brake pedal. Then the Leaf holds its position until the accelerator is pressed again. The holding action works on slopes too.

SL and midlevel SV Leafs equipped with an optional Technology Package get another new driving aid, one that has a faint whiff of autonomous operation about it. ProPILOT Assist automatically maintains speed and distance from a car ahead based on driver-set limits, and can even make a full stop when necessary. It will also keep the car neatly centered in its lane—without “ping-ponging”—so long as the driver maintains a minimal grip on the wheel.

What ProPILOT Assist does is absolutely clear. Why it does it is less certain. Nissan calls it a “driving assistance technology” but it has considerable limits. For starters, it only works on highways with well-defined lane markings. When the driver changes lanes, the system needs a few moments to identify markings again. Plus, there is a long list of weather, light, and road conditions that can render the system inoperable. While the lane-centering control continues to work even if the driver elects to exceed the preset speed, we found it is possible to go fast enough to confuse the system in curvier sections. Then, too, there must be a measure of grip on the steering wheel, and it’s hard to tell when the threshold for that has been crossed even if the driver is touching the wheel. (Warnings are not instantaneous; drivers can actually take both hands off the wheel for a few moments.) Finally, there’s the question of how much relief from the “chore” of driving is even necessary. Under the very best of circumstances the Leaf isn’t going further than 150 highway miles at one stretch before needing a lengthy pause to recharge. Just how tuckered out can a driver get in two to three hours of breathing and steering?

Compared to a system like Cadillac’s Super Cruise, which has more truly autonomous elements to it, ProPILOT is considerably less expensive. Still, this tester couldn’t shake the suspicion that it exists to convince the bosses at Nissan that the time and money spent on engineering autonomous systems is getting some results.

Nissan says it takes about 35 hours to fully recharge the Leaf battery with a 120-volt “Level 1” hookup, and about 7.5 hours when plugged into a 240-volt “Level 2” feed. When this driver charged the car from a Level 2 charger, it indicated a 7-hour, 50-minute wait with the battery almost fully depleted and a 4-hour recharge on the test leg that ended with 59 percent battery capacity. The SL comes standard with a 120-/240-volt charging cable that allows for charges from normal household outlets, as well as “Level 3 fast-charge” capability that the manufacturer says can transfer enough juice for 88 miles of range in just 30 minutes.

For all the attention on the Leaf’s power system and driver assists, it’s easy to forget that it’s still a small car that needs to do small-car things. What we think you’ll like about the new Leaf is its lively throttle response, nimble handling, almost-plush SL interior (with standard leather upholstery), passenger and cargo space, and upgraded tech. Apple CarPlay/Android Auto functionality is included in the SV and SL; so is the NissanConnect telematics system with the ability to connect to the vehicle via a smartphone to remotely check battery charge level, lock or unlock the doors, turn on the heat, and locate the car in a crowded lot. What bothers this reviewer is a cargo cover at head-bumping height when the rear hatch is open for loading, an unlighted power lock switch, limited personal-item storage, and a steering wheel that tilts but doesn’t telescope for optimal driver comfort.

Like all vehicles, the 2018 Nissan Leaf is a series of compromises, and we’d wager the primary compromise on many potential buyers’ minds is driving range versus purchase price. The Leaf’s EPA-rated 151-mile driving range pales in comparison to the 238-mile range of its most direct competitor, the Chevrolet Bolt EV. However, the Leaf is also around $5600-$6600 cheaper than the Bolt, and is highly competitive with (or superior to) the Bolt in most other respects. Is another 80-90 miles of driving range worth 5 or 6 grand to you?