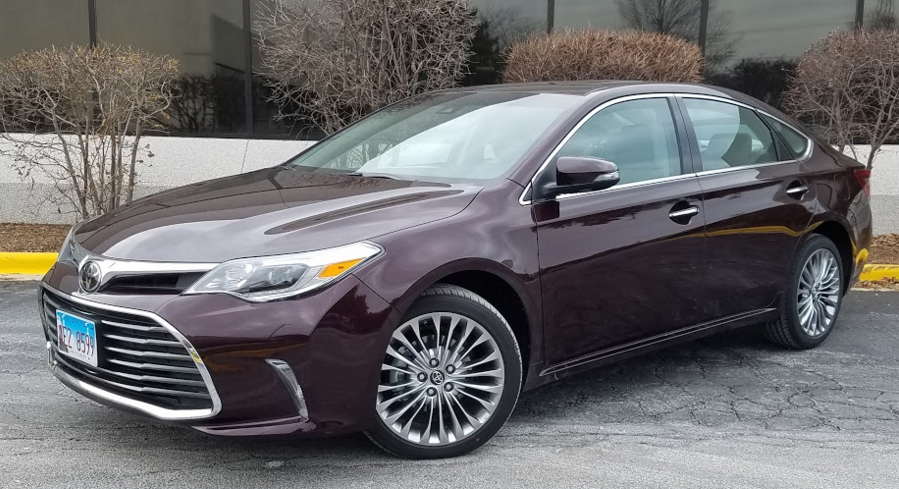 The not so good: No folding rear seat back

Cars in general — and large cars in particular — are getting to be a hard sell. What large-car sales that haven’t been siphoned off by crossovers are increasingly going to midsize cars that seem to be getting larger all the time. All of which leaves “traditional” big sedans like the Toyota Avalon kind of out in the cold. 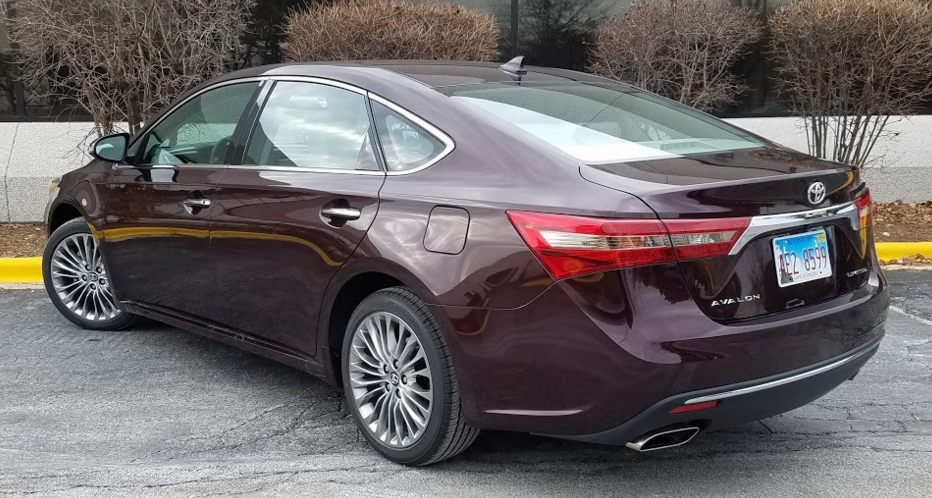 The Avalon is only about 3 inches longer than its popular Camry stablemate, but offers more trunk space and rear-seat legroom. It comes with a standard V6 engine, which when added to a Camry actually makes the latter more expensive.

Although we consider the Avalon a full-size car, it now rides a wheelbase that’s actually a tad shorter than that of its newly redesigned Camry midsize sibling (111.0 inches vs. 111.2), and is only about three inches longer overall. It maintains a rear-passenger legroom advantage of 1.2 inches along with a trunk that carries nearly one cubic foot more. But what’s perhaps most surprising is that the base Avalon — which starts at $34,395 and comes standard with a V6 engine — costs nearly $1000 less than the least-expensive V6 Camry.

And a sweet V6 it is. Some midsize cars, in particular, have replaced their previously available V6s with turbocharged 4-cylinder engines, and though “power on paper” may have gone up with the change, the cars just don’t feel as good in practice. But Avalon maintains the gutsy full-throttle launch and “right-now” power delivery that have long been a V6 hallmark, making that one of its greatest assets. 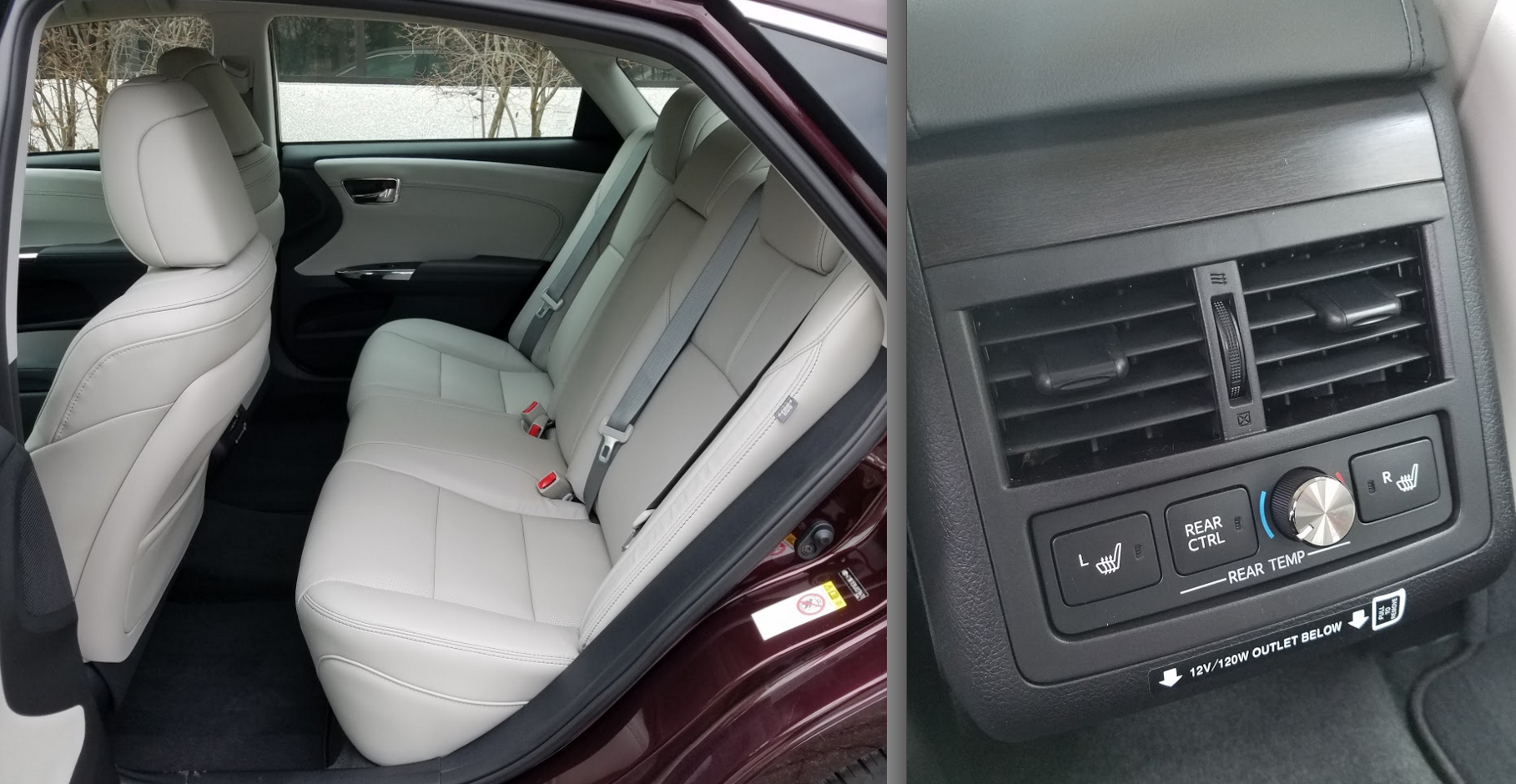 But there certainly are others. The rear seat is wide enough to fit three across reasonably comfortably (with the middle rider getting a nearly flat floor underfoot), and our Limited provided them with heated seats (for the outboard passengers), separate climate controls, and a 12-volt outlet. Avalon also boasts a clean interior layout, classy interior materials, and good all-around visibility. Though the glovebox is on the small side, further storage is provided by a 2-tier console box, console cup holders, a handy left-side dash bin, and a large forward console bin near Aux/USB/12-volt jacks with — at least on the tested top-line Limited — Qi wireless device charging built into its cover. Infotainment controls are easy to reach and use, and the radio includes a CD player. Climate controls are of the repetitive-step variety — which we don’t find as convenient to use as more conventional rotary dials — but the system has automatic temperature control, and at least the controls are easy to reach.

Handy buttons to turn on/off the forward collision warning, traction control, and blind-spot alert are found in a handy panel to the left of the steering wheel along with the trunk release, power rear sunshade control, and a handy pop-out bin.

Yet not all is well in Avalonland. Although base XLE models wearing 17-inch wheels with “taller” tires may ride better, the tested top-line Limited (and mid-tier Touring) come with 18-inch wheels and “shorter” tires that typically don’t absorb small bumps as well. Indeed, the many small bumps (and nearly as numerous large ones) that are part and parcel of roads around our Chicagoland headquarters tended to induce a bit of brittleness in the ride as they were passed over, something that seems a bit out of place in such a large, somewhat conservative sedan. 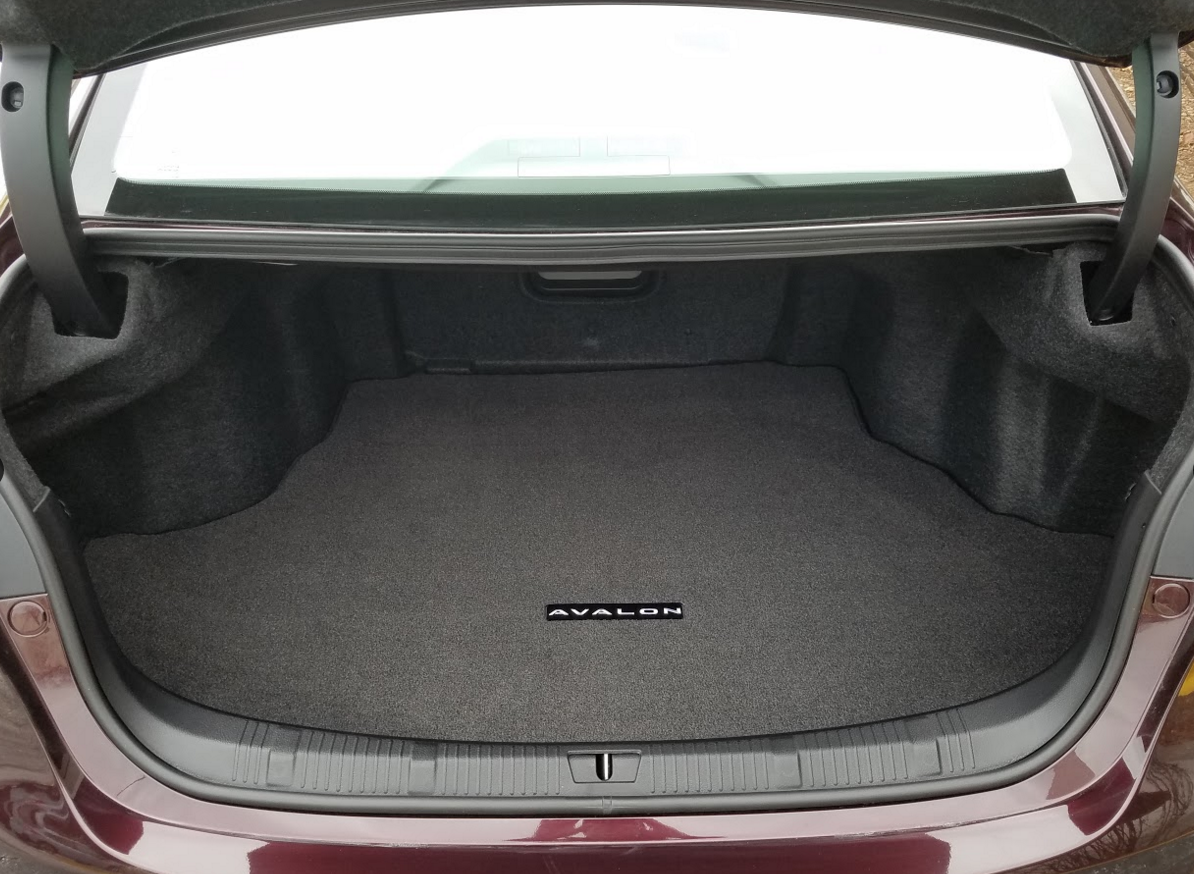 Though the trunk is large, the lid hinges take up a bit of space and the rear seat backs don’t fold, but there is a small pass-through for skis.

Although the trunk is quite large, sickle-shaped hinges dip into the load area a bit when the lid is closed (though they’re covered to protect luggage from being damaged), and the rear seat backs don’t fold to expand the space (though there is about an 8×8-inch pass-through for skis and such).

But that’s about it for complaints.

While the Camry certainly draws the lion’s share of marketing support and sales — with most of the latter going to mid-line 4-cylinder models — there’s something to be said for the satisfying punch of a V6. And in the case of the Avalon, there’s a lot to be said for the car that surrounds it. The base XLE comes with such niceties as dual-zone climate control, leather upholstery, heated front seats, 8-way power driver seat with lumbar adjustment, keyless access and starting, and Toyota’s Safety Sense P suite of safety features that includes forward collision warning and mitigation with pedestrian detection, lane-departure warning and mitigation, adaptive cruise control, and automatic high beams. Added on our test Limited are driver-seat memory, heated and ventilated front seats, heated rear seats, 3-zone climate control, Qi wireless device charging, power rear sunshade, Toyota’s Safety Connect telematics system, and blind-spot/rear-cross-traffic alert.

Though sales figures for the Avalon are meager next to those of the Camry, Toyota certainly isn’t giving up on its flagship sedan, as a redesigned version due to arrive late spring as a 2019 model has already made the auto-show rounds. Though the large-sedan category may be struggling, the Avalon, at least, is certainly not down for the count.

It’s hardly stodgy looking, yet the Avalon has traditionally been saddled with a rather conservative reputation. But for those who want a family sedan with some V6 spunk, it stands as not only a good car, but a surprisingly good value.