The great: Unique character, both inside and out

The good: Powertrain performance, good passenger/cargo room for the class

The not so good: Rear seat and trunk space still tight

The sands of time haven’t run out on the Volkswagen Beetle Dune. Expressively outfitted and vibrantly colored (if you pop for the extra-cost Sandstorm Yellow Metallic paint), this dune-buggy-inspired “Bug” enters its third model year in 2018 with some key upgrades. 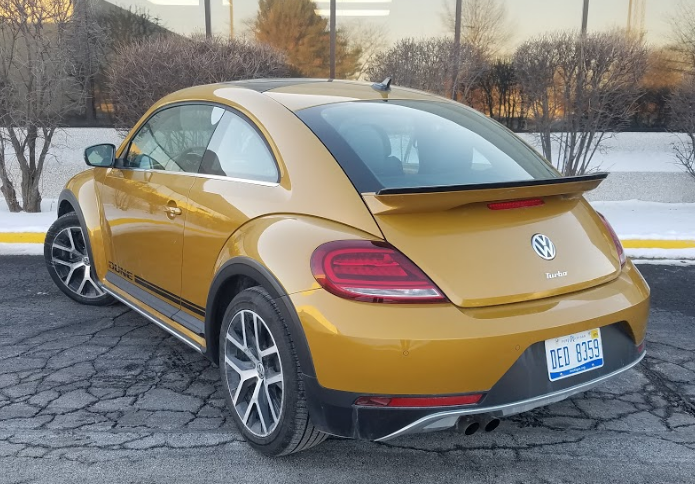 Especially when wearing optional Sandstone Yellow Metallic paint, the Dune really stands out. This is not a car you’re likely to overlook in a parking lot.

The Dune coupe bowed in 2016 with a slightly elevated ride height and wider stance than other Beetles, a black-edged decklid spoiler, black wheel-lip and lower-body cladding, exclusive bumper and air-intake designs, and LED taillights. Inside was a specific gray-and-black interior scheme with yellow stitching and seat piping, and yellow-rimmed instrument dials. It had the aura of a short-term limited edition, the kind of thing that’s created to draw some attention to a “mature” product line for a year, then disappear to make way for a new “halo” model. Not so the Dune — it added a convertible companion in 2017 and comes back for ’18 with a new engine and added standard equipment

Some special Dune exterior details that set it apart from other Beetles include black body cladding, a taller ride height, “Dune” graphics, and a prominent decklid spoiler.

Where previous Dunes shared a 170-horsepower 1.8-liter turbocharged four-cylinder engine with most other Beetles, the new one switches to a 2.0-liter turbo four now used by all Bugs. It makes 174 horsepower at 5000 rpm and 184 lb-ft of torque at a low 1500 revs, and delivers fairly snappy off-the-line punch. It cruises easily enough on the highway, but struck this driver as a little shy to dig in and go from moderate speed to outright fast when the pedal was tromped. The sole transmission for Beetles is a 6-speed Tiptronic automatic that performs well.

The EPA projects fuel economy from this powerteam at 26 mpg in city driving, 34 mpg in highway running, and a combined 29 mpg — all improvements on the ratings for the 1.8-liter engine. However, in this driver’s turn with Consumer Guide®’s test Dune coupe, a 118-mile stint that was 55 percent city-type operation, it returned a lukewarm 23.5 mpg.

Metal trim painted to match the body certainly stands out, and we liked the vertical door handle at the front of the door (though adding one to the armrest would be even better), which makes the long door easier to close. Seats are covered in two-tone grey upholstery with (in this case, at least) bright yellow stitching.

The look and feel of this latest Dune is right in line with previous examples that CG has sampled. About the only thing that truly bothered this reviewer on the 2018 test car was a rattling cargo cover that defied attempts to make it seat well enough to quiet down. Otherwise, there’s virtually no change to cabin materials (lots more hard plastic than soft-touch surfaces) or controls—especially the simple, intuitive audio settings. Climate controls mix helpful temperature and fan-speed dials with a number of function buttons. The cloth-and-leatherette front seats are comfortable and provide good support, but rear seat backs are quite upright. Headroom is good in front but is definitely limited to sub-6-footers in back.

Upper and lower glove boxes are particularly helpful for cabin storage because there’s no cubby in the center console, just a tiny covered space built into the armrest. Other spaces are a small open bin at the front of the console under the USB and auxiliary ports, door pockets, pouches on the back of the front seats, and small rear-sidewall pockets. There are twin cup holders in the console for front-seat occupants, but just one for rear-seaters. 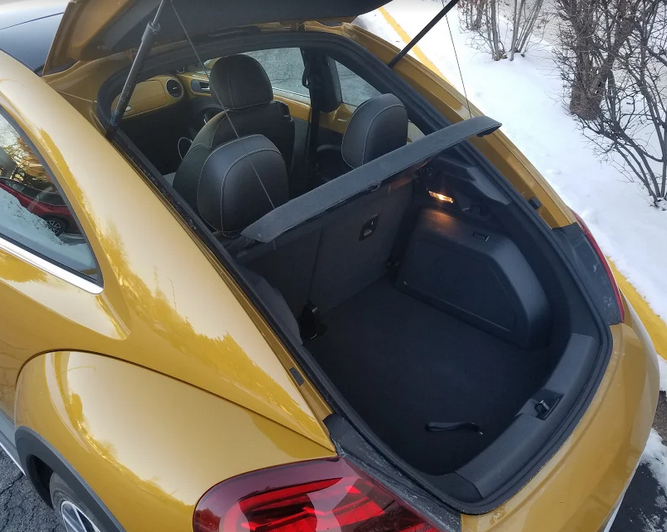 If the Dune has a weakness, it’s in cargo space. Not only is the rear compartment small, but the sloping roofline limits the height of items that can be carried — at least, toward the rear. Thankfully, the rear seat backs fold to expand the area.

The trunk will snugly hold a weekend’s soft luggage for two, or a week’s worth of their groceries. Rear seats fold in a 50/50 split for added cargo space, but they don’t rest fully flat, and they sit at some height above the trunk floor.

Maneuverability is aided by light, variably assisted steering. With its modified stance, the Dune handles better than it rides, but it’s hardly a torture device.

Now absent the hotted-up R-Line model of recent years, it’s the Dune’s chassis modifications and aggressive style touches that make the case for the VW Bug’s place in the sporty/performance category. Maybe that’s why this Beetle has legs.

What the Beetle Dune sacrifices in practicality it more than makes up for with charisma. 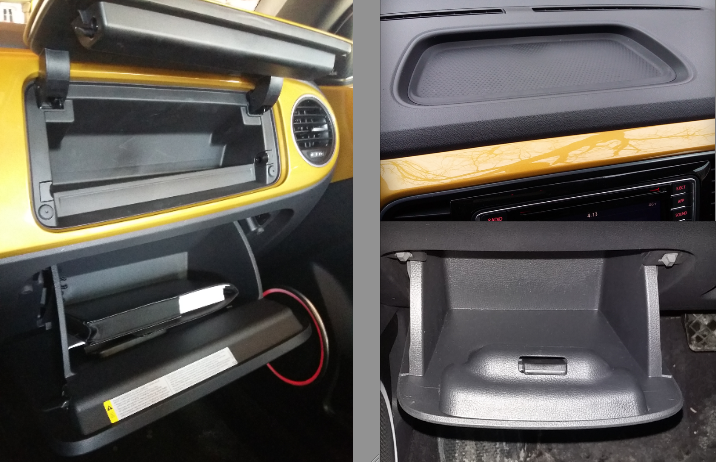 None are very large, but the Dune hosts some handy storage spaces. In addition to upper and lower gloveboxes, there’s a dashtop tray and — to the lower left of the steering wheel — a drop-down dash bin.

But that said, there are a surprising number of practical features packed into the Beetle Dune as well, along with any number that are just plain cool. Since describing them all would make for a long, boring laundry list, perhaps it’s best to embrace the old adage, “A picture says a thousand words,” and let some photos tell most of the story.

Often I’ll be driving test vehicles at night and get “flashed” by oncoming cars when my brights aren’t on. A handy dial under the light switch (left) allows you to adjust headlight height (center), something I wish more cars offered. Right: Peek-A-Boo! Another cool feature I discovered — strictly by accident — was that the rearview camera is hidden under the round “VW” badge on the trunklid (the badge also serves as the trunk release — neat itself), preventing the lens from getting dirty in slushy weather. Veeeery clever.

Another dial on the lighting panel (left) allows you to choose the glowing color that surrounds the door speakers (center), giving you a choice of red, blue, or white. Right: Another light-related nicety. Instead of just sounding a chime — which is the equivalent of a six-month-old crying (What the heck do you want?) — the Beetle tells you exactly what’s wrong.

The Beetle’s infotainment controls (top left) are exceptionally easy to decipher and use, as are the climate controls (bottom left). The latter allow you to select defrost, dash vents, and floor vents all at the same time (three little lights in the center), an unusual luxury I really like. Something else to like: Both the driver seat and front-passenger seat include lumbar adjustment, the latter a very rare — and much appreciated — feature in the class.

That didn’t take long now, did it?