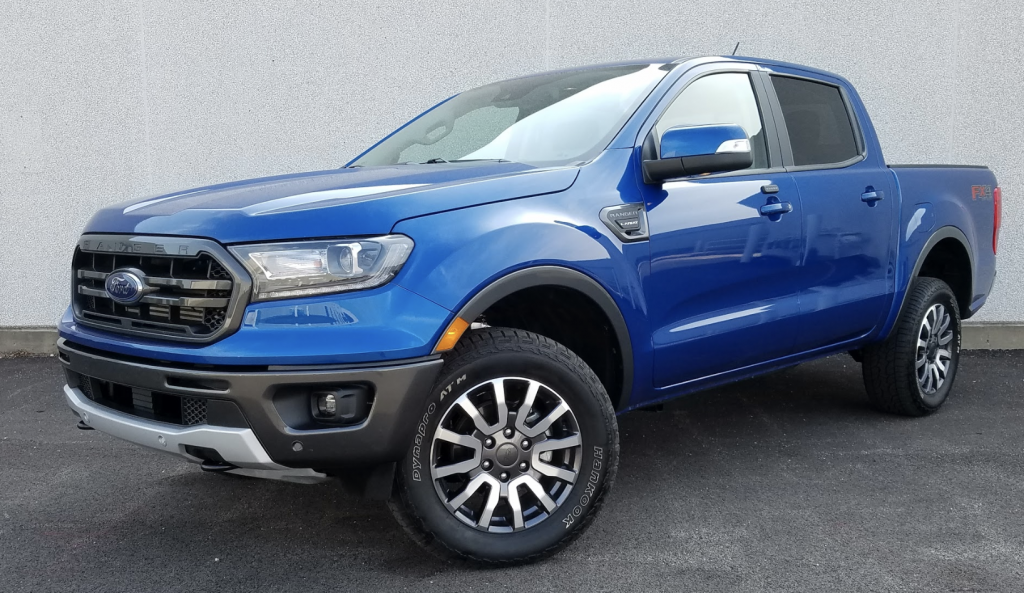 The not so good: Control layout

A class that was once on the wane has seen a resurgence of late, with Ford’s revived Ranger being the latest “resurgent.” 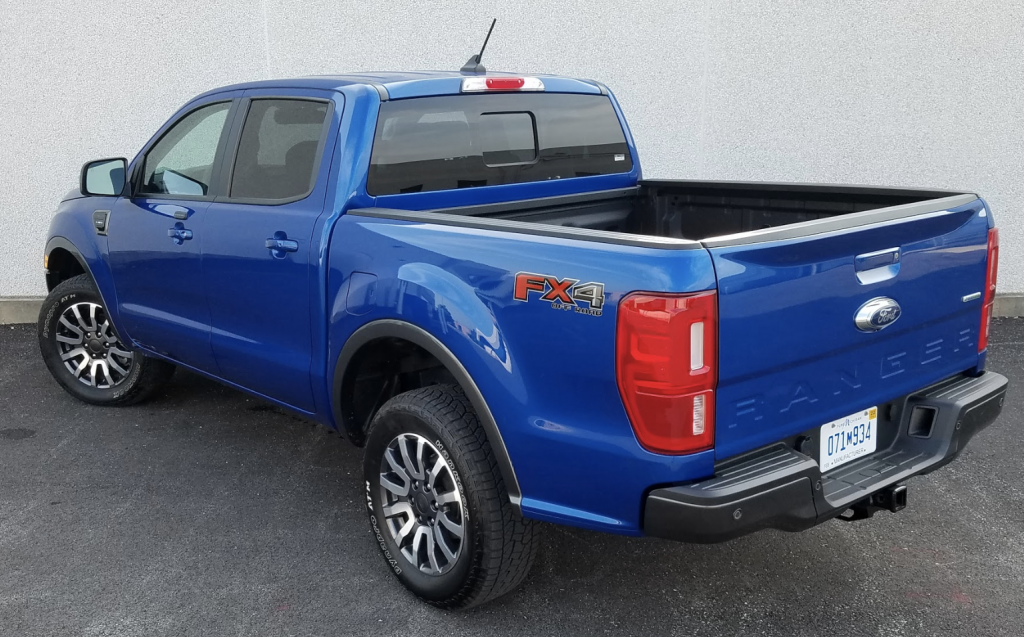 Especially with the 5-foot bed fitted to SuperCrew (super cab) Rangers, we appreciated the sliding rear window that allows long items to be carried half in/half out of the vehicle.

Last offered in the U.S. for 2011, the Ranger that returns for 2019 is all new … and not so new, as it’s based on a pickup long sold elsewhere in the world. It most ways, it follows the class norm, being a traditional body-on-frame design offered in extended and crew-cab form with either rear- or 4-wheel drive. 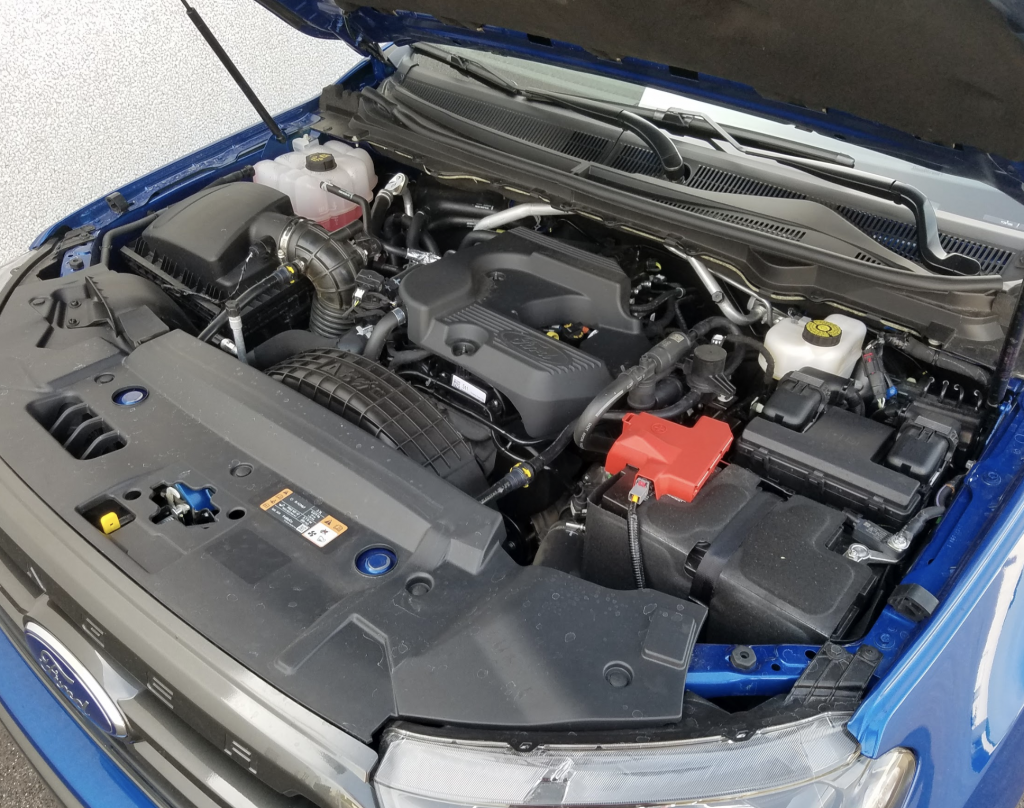 It’s not very picturesque, but the 2.3-liter EcoBoost engine — the only one offered in the Ranger — is both strong and thrifty.

About the only unusual element is the powertrain. The standard — and only — combination is a 270-horsepower 2.3-liter EcoBoost (turbocharged) 4-cylinder engine mated to a 10-speed automatic transmission, a team good for a 7500-lb maximum towing capacity. Compared to the Ranger’s natural rival, the Chevrolet Colorado, the engine splits the difference in power output between the Colorado’s standard 200-horsepower 2.5-liter four and its available 308-hp 3.6-liter V6 — with similar offerings being available in other class entries such as the Nissan Frontier and Toyota Tacoma, while the Honda Ridgeline comes only with a 3.5-liter V6. Also offered on the Colorado and its near clone, the GMC Canyon, is a 181-hp 2.8-liter turbodiesel.

Our tester was a top-line Lariat 4WD crew cab, and as such, it makes kind of an interesting comparison to a recent test of its big brother, a 2018 F-150 Platinum 4WD Crew Cab. While the Ranger Lariat started at $38,385 and carried a 22 mpg combined EPA rating, the F-150 Platinum started at $57,580 with a combined EPA rating of 18 mpg. Granted, the Platinum is higher up the scale than a Lariat — which as an F-150 would cut about $10,000 from the price, but comes only in SuperCab (Extended Cab) form — though even that represents a substantial upcharge. 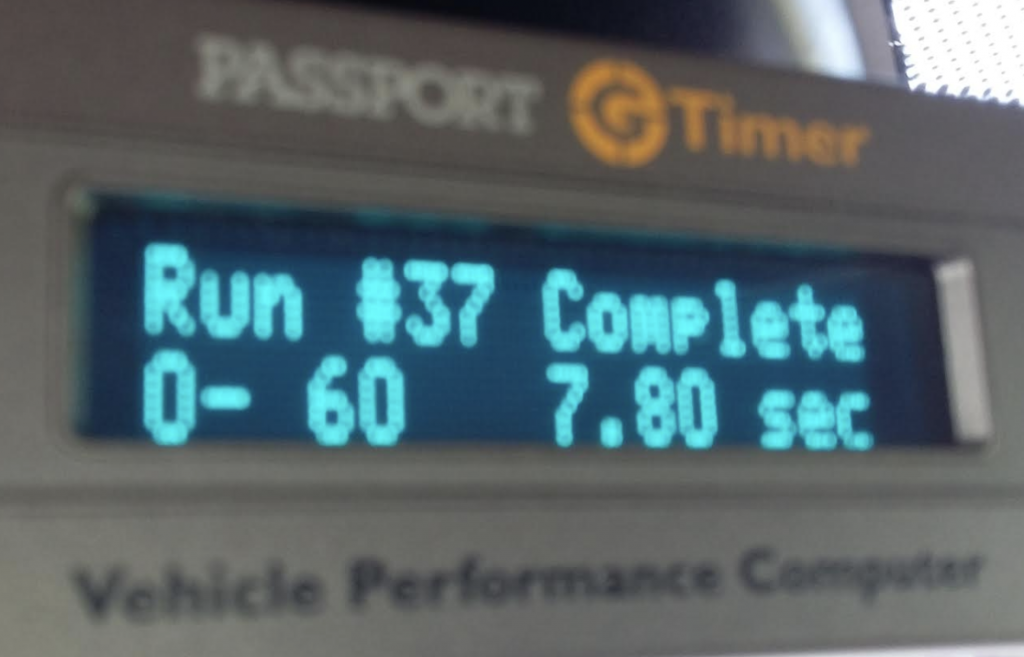 And that’s probably one thing that brought back the Ranger.

While a good effort on Ford’s part, nothing about the Ranger really strikes us as standing out. Room and ride are about what you’d expect from a compact crew-cab pickup — the former being enough for four good-sized folks (five in a pinch), the latter fairly absorbent over our potholed Chicago streets but with some after-impact “reverberation.” Acceleration was good enough, averaging 7.8 seconds in our 0-60 test, though the full-throttle launch was kind of lazy and stabbing the gas at speed often resulted in a bit of a delayed response.

Visibility is decent all around, and the rear headrests can be folded down to clear the view aft, a nice touch. Also decent is interior storage, which consists of a fair-size glovebox, deep console box, two console cupholders, a forward console bin under 12-volt and two USB plugs, and small map pockets with cupholders in the doors.

The interior looks nice enough, but the audio and climate controls are tucked way down low and recessed, making them hard to see and adjust, particularly in certain lighting conditions or when wearing sunglasses.

Less “decent” was the control layout.

Even the audio controls are mounted quite low. They include volume and tuning knobs, with other adjustments being made on the screen, but favorite radio stations can only be saved by “band” — not mixed. Climate controls are even farther down, with temperature and fan speed being adjusted with tedious repetitive-step pushbuttons, and mode requiring going into the touchscreen. Worse is that these controls are hard to see, particularly when wearing sunglasses. And while the overall look was nice enough, we were surprised that the door tops — where you might rest your elbow — were just hard plastic. 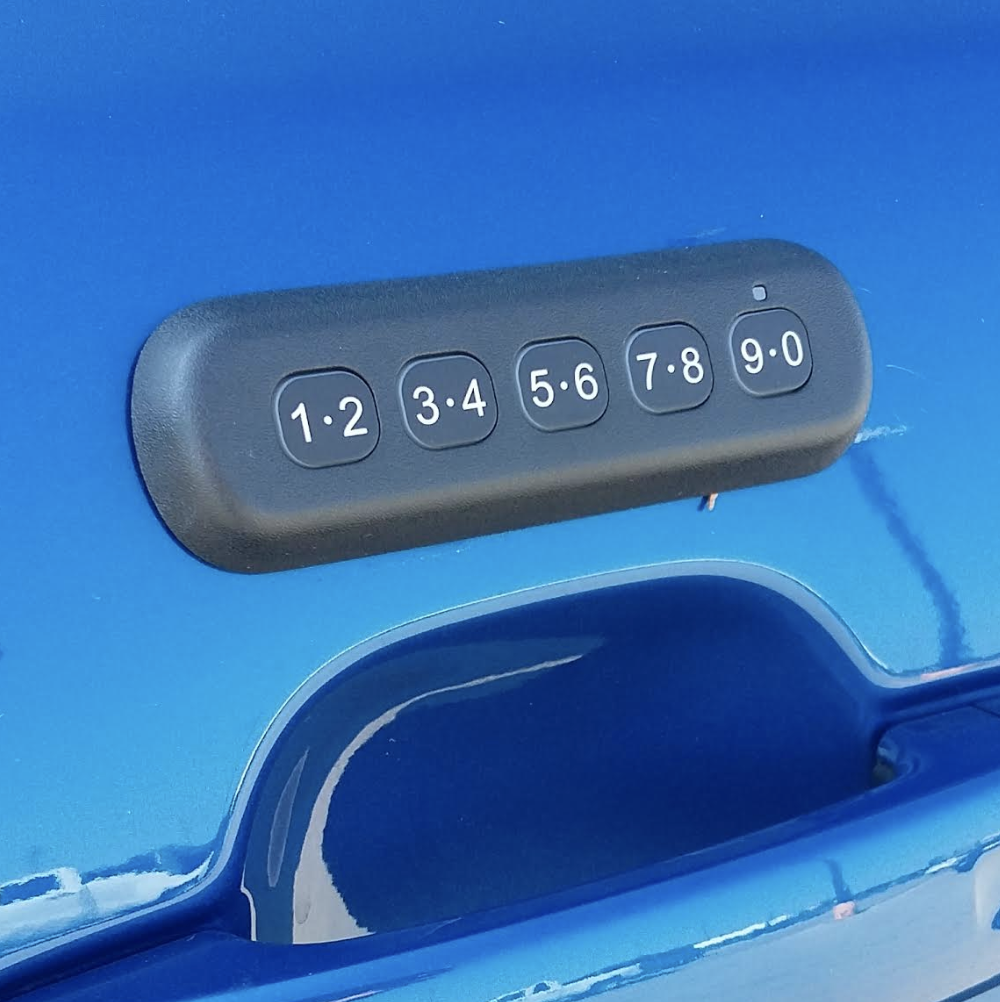 The optional SecuriCode door locks are really neat if you want to “forget” your keys — or actually do.

A couple of other interior impressions were more positive. The driver and front passenger seat included power tilt cushions and power lumbar adjustment (particularly rare for both to have them), and the driver seat could be raised quite high, a boon for shorter folks. The rear-seat cushions flip up to reveal storage bins underneath, and legroom is good back there unless the seat ahead is pushed all the way rearward. A class exclusive is the $95 SecuriCode keyless-entry keypad that allows you to get in the truck without your keys (handy if you want to go jogging or otherwise travel light). And the sliding rear window helps when carrying long items that won’t fit in the 5-foot cargo bed, which includes a tailgate with power lock.

With the addition of the Ranger, the compact-pickup class has grown from four entries to six in the past few years, with a number of other “newbies” expected to arrive soon. If the Ranger has a claim to fame here, it’s that its EcoBoost engine not only provides class-leading non-diesel fuel economy, but also good power and very high towing limits. And of course, sporting that blue oval badge on both ends doesn’t hurt, either.

Save for its potent standard engine, Ranger breaks little in the way of new ground. However, it’s available with a good array of features, helping it hold its own in a growing class.