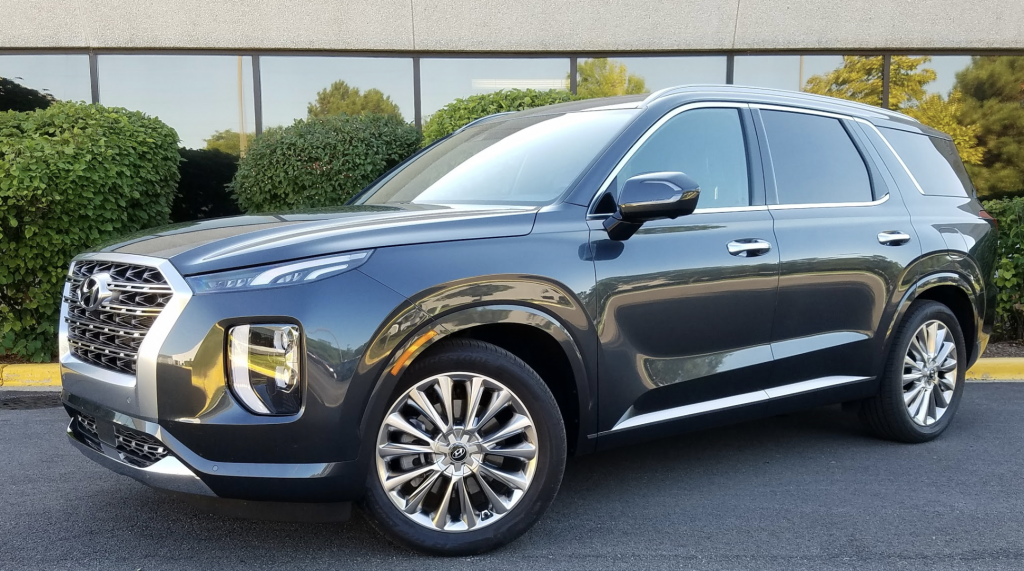 The not so good: Audio tuning knob a long reach for some drivers, some control buttons difficult to see in certain lighting conditions

Our Palisade posed a bit of a problem in writing this Test Drive report … though perhaps not in the way you might think. 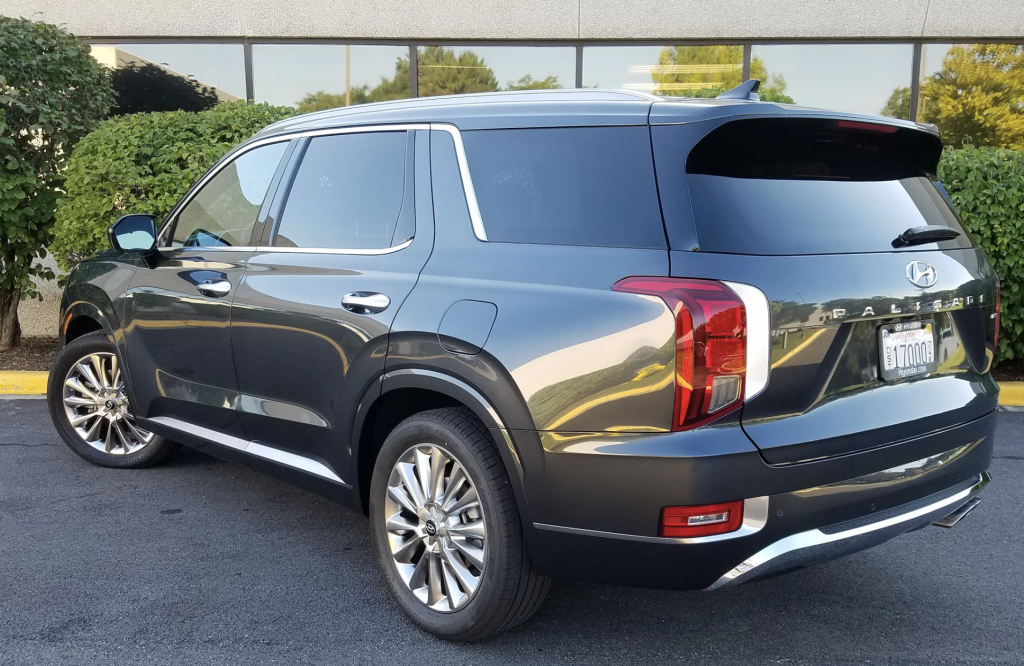 Under our Quick Hits section above, we list elements we consider to be “The Great,” “The Good,” and the “Not So Good.” It was the last category that proved problematic.

You see, there just wasn’t much we could come up with to really criticize. OK, so the audio tuning knob was a stretch to reach and some accompanying buttons were hard to discern in some light, but those seem a bit … petty. And fuel economy wasn’t the best, but it’s acceptable for such a large, 8-passenger crossover.

We covered the Palisade in depth in our First Spin report, so we invite you to read that for more details. Here we’ll get into specifics gleaned from our local Chicagoland test.

Our timer clocked the Palisade at an average of 7.2 seconds 0-60, a strong performance.

While ride quality was in question after our preview drive in Idaho — as the roads were fairly smooth — our test over Chicago’s bumpy thoroughfares revealed that the Palisade rides very nicely over bumps. It can also hustle. With a 291-horsepower 3.8-liter V6 underhood (the only engine available), our Palisade got a strong jump off the line to record a 7.2-second sprint in the 0-60 dash, a laudable performance. Less laudable but still decent was fuel economy, which worked out to 22.8 mpg in 65 percent highway driving, beating the EPA’s 21-mpg combined figure.

Although they’re mentioned in our preview-drive report, a few elements warrant repeating. 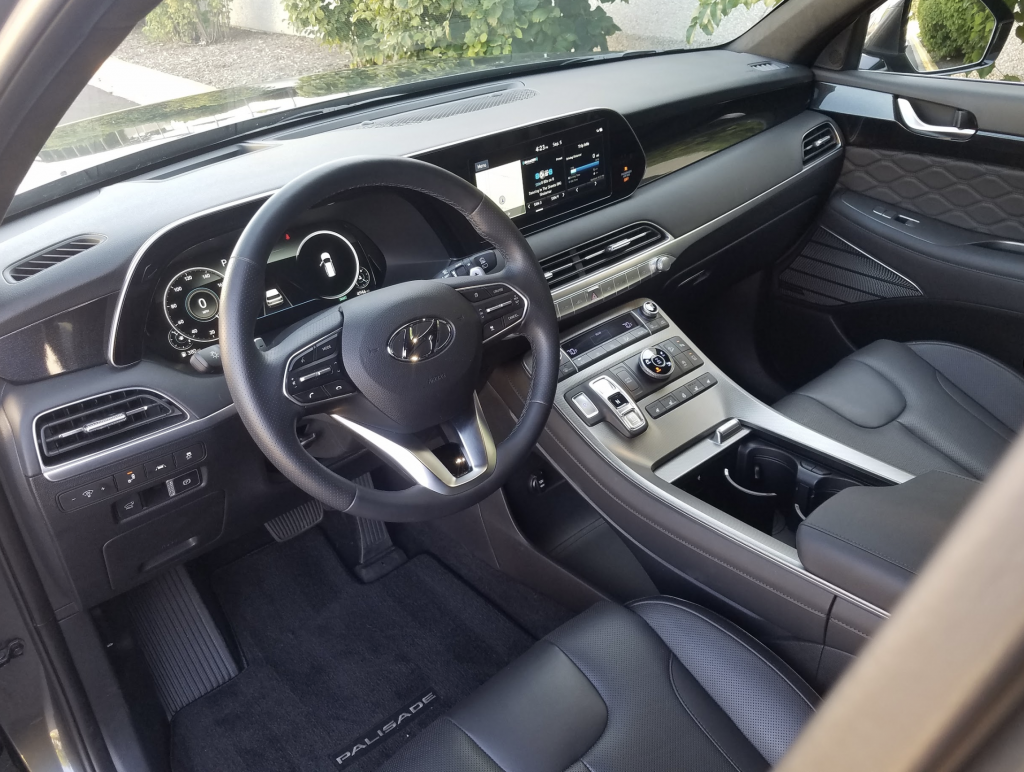 Palisade’s spacious, comfortable interior includes an under-console storage bin beneath the pushbutton shifter, along with a large, versatile console bin.

There’s good space in the first row, and the driver seat — at least in the tested top-line Limited — gets lumbar adjustment and an extendable cushion, both real comfort pluses. There’s also a head-up display that shows speed and other information on the base of the windshield, where it’s closer to the driver’s line of sight. A flat floor in the second row aids someone sitting in the center of the available bench seat. Also of benefit (again, on Limiteds) are heated and ventilated seats, full temperature controls, and USB/12-volt/115-volt AC (household current) outlets. Front-seaters can see those in back through a conversation mirror, and can converse with them using the Driver Talk function, which sends their voice through the audio speakers. Our tester had second-row captain’s chairs, which provide for a walkway between the second and third rows, though there’s a 6-inch rise in the floor that has to be cleared. Room in the third row is adequate for normal-size adults, getting back there is fairly easy, and occupants get reclining seat backs, four cupholders, and two USB ports.

Second-row seats slide fore and aft several inches to balance second- and third-row legroom. Second-row occupants get their own heated and ventilated seats along with temperature controls and 12-volt/USB/115-volt power outlets. Those in the third row get a handy handle that aids in exit, along with reclining seat backs and a good amount of space.

Activate the left turn signal, and a side-camera view of upcoming traffic is displayed in what is otherwise the speedometer surround. Same is true on the right side. Among the handy console buttons are those to lock the center differential on AWD models for better snow traction, turn off the engine’s stop/start system (intended to aid fuel economy but occasionally annoying), turn on seat heat/ventilation and heated steering wheel, and activate the 360-degree cameras.

A few other standout features include rear occupant alert (so you don’t accidentally leave someone sitting in back), Safe Exit Assist (which sounds a warning if a rear door is opened when upcoming traffic is detected), a head-up display for the driver, rear automatic braking (automatically applies the brakes if an obstacle is detected when backing), and rearview cameras that automatically come on when you activate the turn signal on either side, displaying their images on instrument-panel screens.

A hands-free power liftgate opens to reveal a huge, flat-floor cargo area, with a large bin under the rear floor that can hold the cargo cover. On the driver’s side panel of the rear cargo area, there are also second-row seat-release buttons, others to power raise and lower the third row seat backs, and a 12-volt plug.

Equally impressive is the cargo compartment. A hands-free power liftgate raises to reveal a large cargo area, and there’s a good amount of space even behind deployed third-row seats. Second-row seat backs have a release in back, and the third-row seats have a power-fold function. There’s also a wide underfloor bin that can hold the cargo cover, a nice touch. A self-leveling rear air suspension compensates for heavy loads, which means your headlights shouldn’t be aimed at the sky.

The Palisade is the largest crossover Hyundai has ever built, and the only one in the Hyundai stable to offer 8-passenger seating. While it’s very similar to the Kia Telluride under the skin, it offers a few features the Kia doesn’t. While there are other 8-seaters in the game with more established nameplates, the Palisade managed to hit a home run in its very first time at bat, earning one of our Best Buy awards in its rookie season. ‘Nuff said ….

Although it’s Hyundai’s first stab at a “plus-size” three-row midsize crossover, the Palisade is an unquestionable hit.