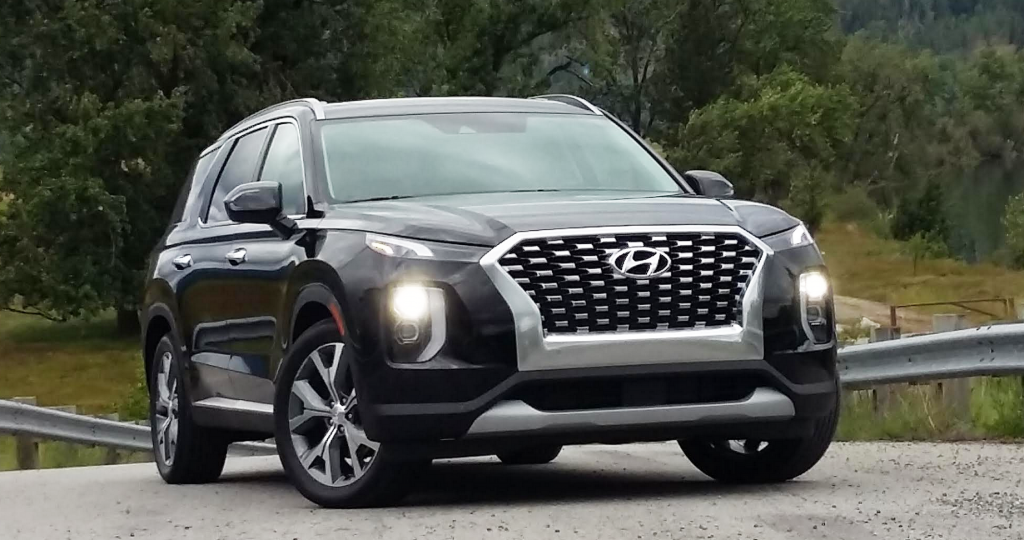 When Hyundai says the new midsize, 8-passenger Palisade is aimed at families … they really put their money where their mouth is.

In the midsize crossover class, about half the members are 2-row vehicles, the other half having three rows. Of the latter, only a few offer 8-passenger seating (rather than just 7), in all cases, dropping that number by one when fitted with dual second-row captain’s chairs rather than a 3-passenger bench. So right off the bat, the new Palisade is about as family friendly (or soccer-team friendly) as midsize crossovers come.

Hyundai says its research of customers indicated that many wanted more room behind a deployed third-row seat for storing stuff, and the new Palisade scores in this regard, as well. In fact, the company says (and shows a photo to prove it) that a 100-quart cooler will fit back there, a good indication of the room offered. 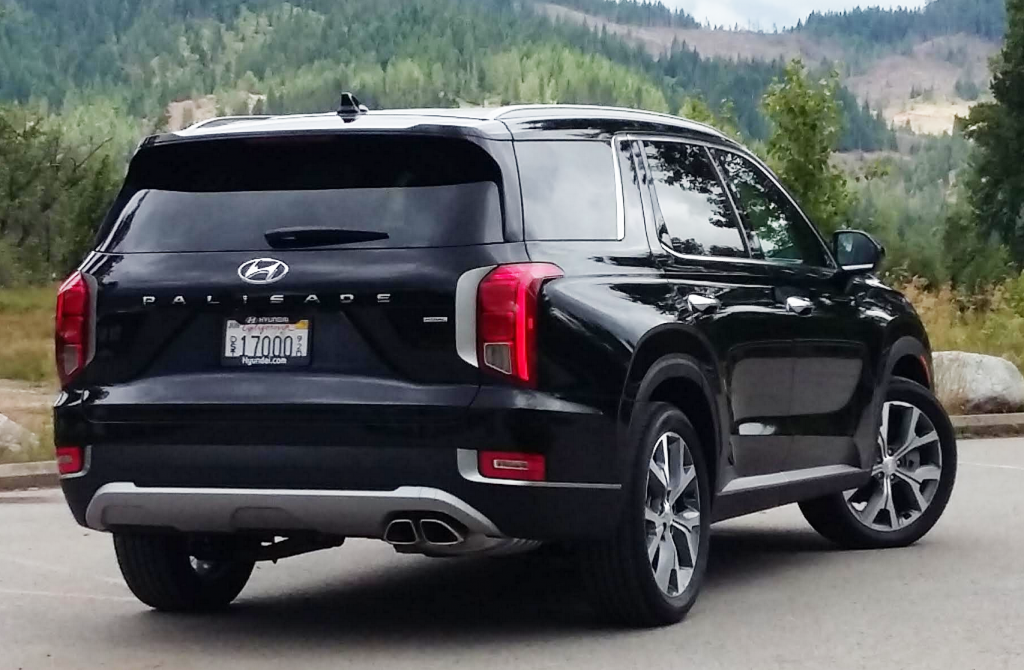 Palisade is four inches longer in wheelbase, three inches longer overall, and 3.6 inches wider than Hyundai’s Santa Fe XL model, which allows it to seat up to eight passengers rather than seven — and gives it more cargo space.

Available features include a conversation mirror (which allows the driver to keep an eye on rear-seat passengers) and a Driver Talk function that allows the driver’s voice to be carried through speakers to the second- and third-row seating areas (no more having to turn around and yell), as well as a dual sunroof on the top-line model that provides a fixed glass panel to give back-seaters more light and a better overhead view.

Other unusual class features offered are a self-leveling rear suspension, rear occupant alert (so you don’t accidentally leave someone in a rear seat), Safe Exit Assist (sounds a warning if a door is opened when a car is approaching from the rear), individual tire-pressure readouts (standard equipment), hands-free power liftgate, head-up display, wireless charging pad, rear automatic braking (the brakes will be applied if an approaching vehicle is detected when in Reverse), the ability to Bluetooth two devices simultaneously (for phone and music), and cameras that automatically turn on when either the left- or right-side turn signal is activated, displaying an image of what’s beside and behind the vehicle on a dashboard screen. 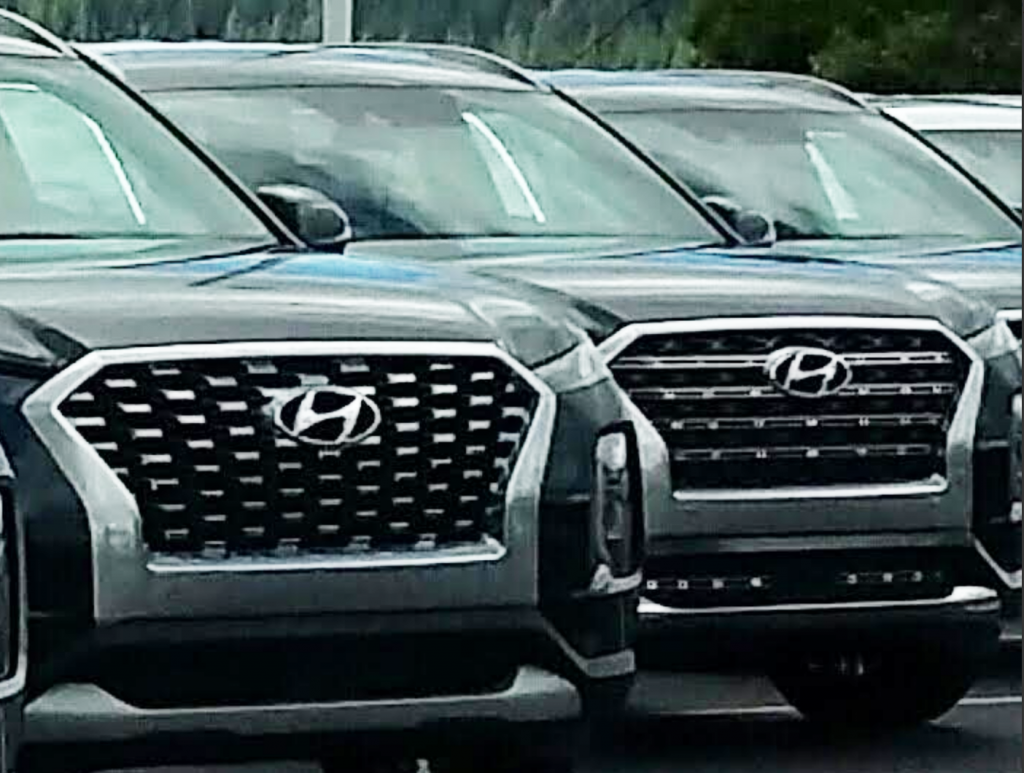 Three trim levels of the Palisade are offered, all powered by a 291-horsepower 3.8-liter V6 and 8-speed automatic transmission (the combination good for a 5000-lb maximum towing capacity), with either front-wheel drive or – for $1700 more – all-wheel drive. EPA fuel-economy figures come in at 19 city/26 highway/22 combined for front-drive versions, 19/24/21 for AWD models. A handy button on the console lets you de-activate the standard engine stop/start function, and another activates Brake Hold, which will hold the brakes on for you at long stops.

The base SE lists for $32,595 including destination and comes quite well equipped, with standard safety features that include forward collision warning and mitigation with pedestrian detection, driver-attention warning, lane-keep assist, rear obstacle detection, rear occupant alert, and automatic high beams. 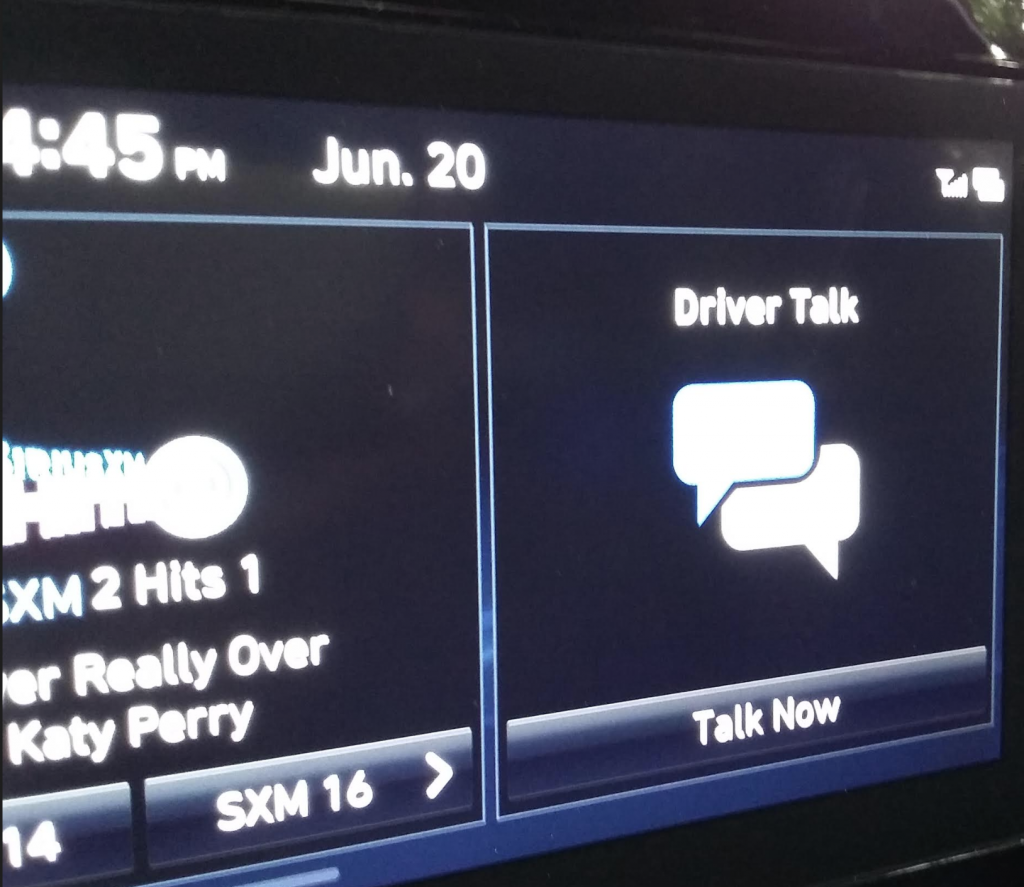 Optional on the SEL and standard on the Limited is Driver Talk, which allows the driver to be heard through speakers in the 2nd and 3rd rows, eliminating the need to turn around and yell. It can be activated by a virtual touchscreen button.

We drove a top-line Limited model at the Palisade press preview in Coeur d’Alene, Idaho, which gave us experience with all the available features.

Something that can be said for all models is that the 3.8-liter V6 – which is large for the class – provides a strong full-throttle jump off the line along with good passing power, the latter aided by fairly quick transmission kickdowns. Ride quality was absorbent but not “cushy,” though a test on our local Chicagoland streets will be more telling.

There’s plenty of adult headroom and legroom in the first two rows. Those in the second row are treated to a nearly flat floor (meaning a center-seater on the available bench has plenty of foot room), and top-line models include heated/ventilated seats (rare for the class), full temperature controls (ditto), and 115-volt AC household outlet (ditto again), along with 12-volt and USB plugs.

Left: Second-row seats slide forward at the touch of either a cushion button or seat-back button (arrows) to ease third-row access and exit. Right: A power recline function is available for third-row seats (button on wall) as is a handy hand grip (far right), which makes it easier to climb out of the third row.

Also, the second-row seats – at least the captain’s chairs fitted to our test vehicle – slide fore and aft about seven inches to balance second- and third-row legroom, and they slide forward easily with the push of a button – or actually, one of two buttons, one being on the seat cushion, the other being on the seat back, where it’s handy to someone seated in the third row. And speaking of the third row, it’s roomy enough to fit good-size adults (my 5’9 frame fit with space to spare) and the top model, at least, includes reclining seat backs, four cupholders, and two USB ports. There’s also a handy handle built into the edge of the door frame to aid getting through the fairly large opening revealed when the second-row seat is slid forward.

Two neat interior-storage solutions are an under-console bin perfect for stashing a purse (left), and a large, covered console box with retractable cupholder “arms” (the one at left having it retracted) that allow for more usable space. Also included in Limited models is a Qi wireless charging pad.

Cabin storage space is another “family friendly” plus. Although the glovebox is modest in size, there’s a large console box with USB and 12-volt plugs, a large covered console bin with neat retractable cupholder “arms,” USB plug and Qi wireless charging pad, and a large under-console bin with 12-volt and USB plug that’s perfect for holding a purse, along with the usual map pockets with cupholders in the doors.

Most “touched” interior surfaces are padded, with the overall look – at least on the tested Limited – being rather upscale. Visibility is good all around, and the Blind View Monitor struck me as really cool: The entire instrument panel on Limiteds is a screen with virtual round speedometer and tachometer gauges at the right and left, and the camera image replaces one or the other when you activate the turn signal on that side. Audio controls

An electronic pushbutton gear selector on left side of console saves space on the console surface, and also allows for the under-console bin shown in earlier photo. Next to it are a number of handy buttons, including those for the Auto Hold brake function, to turn off the automatic engine stop/start system,  and — on Limiteds — to select the 360-degree camera views. The only gaffe here is that the tuning knob for the radio is a long reach to the right.

include volume and tuning knobs – the latter oddly far to the right – with other controls on the easy-to-reach touchscreen. Appreciated is the ability to “mix” favorites from different audio bands. The climate system is controlled by rotary temperature knobs and repetitive-step pushbuttons for mode and fan speed.

Palisade offers lots of cargo space, and can fit a 100-quart cooler behind a deployed third row (second from left). There’s also an under-floor bin that can hold the cargo cover in a designated slot (third from left), and side-wall buttons (far right) allow you to lower the second-row seat backs and power lower/raise the third-row seat backs at the touch of a button.

The Limited’s hands-free power liftgate (optional on SEL) opens to a cargo area that is nicely large and cubic, and folded second- and third-row seat backs rest level with the cargo floor. The power up-and-down third-row seats on the limited (also optional on SEL) are a rare and handy touch (operated by buttons on the side wall that also include a fold-down release for the second-row seats), as is the large under-floor bin that can hold the cargo cover in a designated slot.

While not Hyundai’s first stab at a three-row crossover, the Palisade is certainly the company’s largest “stab.” And Hyundai clearly did its homework. The three trim levels and two option packages for the middle one – along with a couple of stand-alone options – allow buyers to tailor the vehicle to their wants and wallets, and all seem to offer a lot for the money – displaying yet another of the Palisade’s “family friendly” traits.

The 2020 Hyundai Palisade resides at the large end of the midsize-crossover segment, making its mark with 8-passenger seating capacity, lots of cargo space, neat interior features, and a strong value equation.