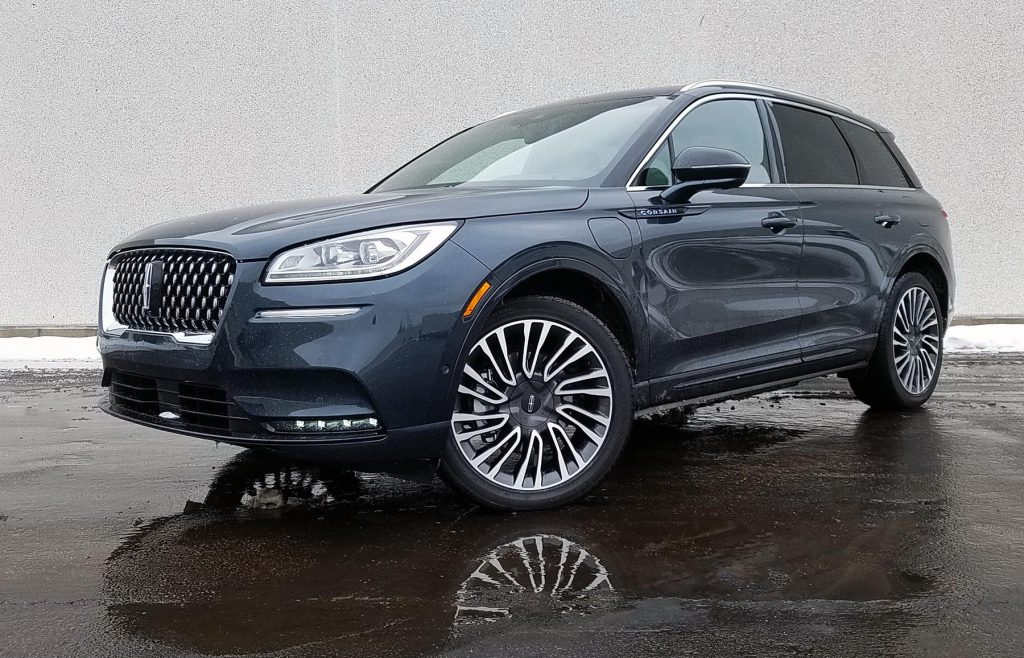 The Lincoln Corsair is in just its third model year in 2022, and in that brief time perhaps the biggest change made to the premium-compact SUV was the addition of a plug-in-hybrid powerplant for 2021. It is a frugal source of motivation but it comes at a considerable jump in cost from Corsairs with gas-only engines. 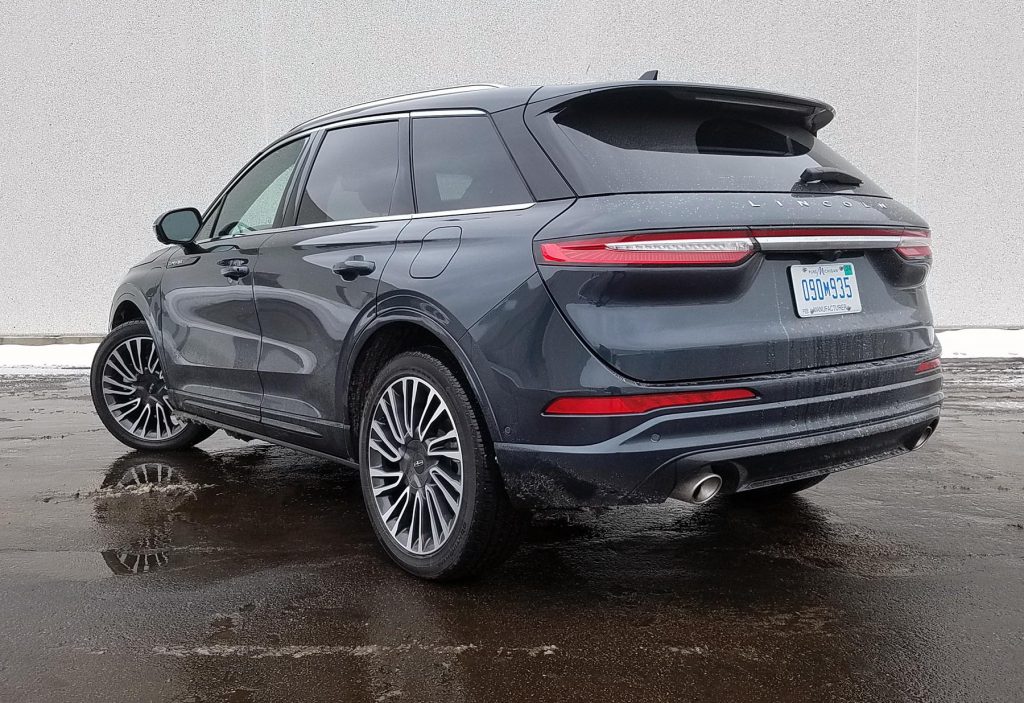 Even though the calendar had flipped to 2022, Consumer Guide’s first exposure to the Corsair Grand Touring—the sole model built as a hybrid—was in a late-circulating ’21. However, powerteam specifics are unchanged for the new year. The 2.5-liter Atkinson-cycle 4-cylinder gas engine and twin electric motors (including a 50-kW motor to drive the rear wheels) generate 266 horsepower regulated through an automatic continuously variable transmission (CVT).

The Corsair’s interior is classy and distinctive, and its Sync 3 infotainment system is clear and easy to use. The unconventional push-button gear selector (nestled just above the climate controls at the center of the dash) requires acclimation, however, and the “D” button is a bit of a stretch–it’s all the way to the right.

Under ideal conditions and when fully charged, the 14.4-kWh lithium-ion battery is projected to provide up to 28 miles of purely electric operation. However, our time with the Grand Touring fell during a January cold snap with daytime temperatures on some days that rose to the low teens Fahrenheit at best. Thus, when this reviewer left the office on consecutive days during this period, indicated range estimates were just 20 and 19 miles, respectively. 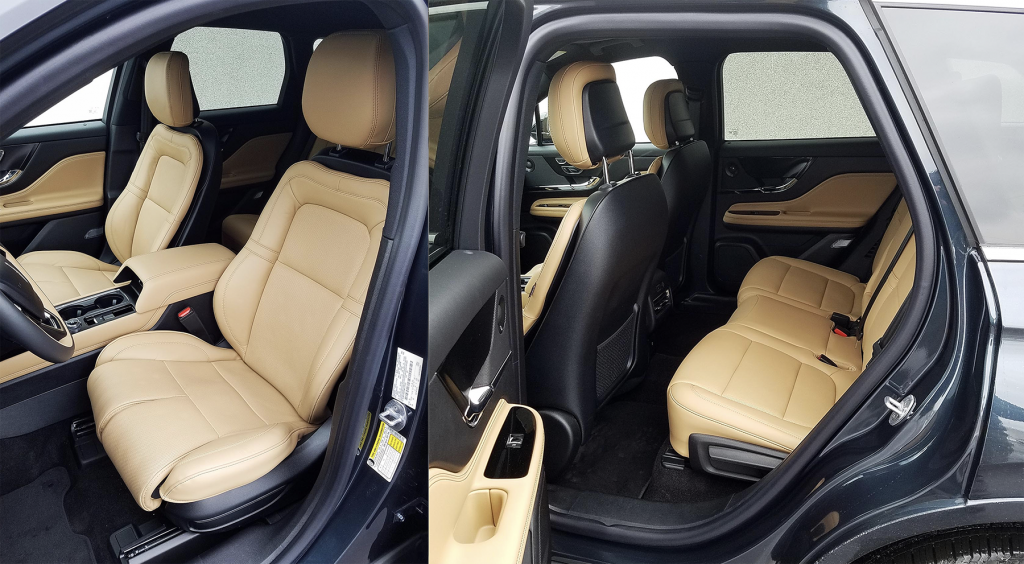 The Corsair offers respectable space for large adults in its front and rear seats, despite its compact exterior proportions. Our test vehicle was equipped with the optional “Perfect Position” 24-way adjustable seats, which some of our editors didn’t find particularly cushy or comfortable despite the broad range of adjustability.

At least the projections proved quite accurate. With the Corsair set in the “Pure EV” drive mode, on the first trip it went exactly 20 miles before switching to primarily gas operation like a basic hybrid. On the second full charge, with evening-commute temperatures around 10 degrees Fahrenheit and traffic moving fairly briskly, the unperturbed switch came after 18 miles. The electric fun wasn’t completely over, either. In the course of a 115.2-mile stint, the vehicle recorded a total of 63.7 juice-induced miles (there are individual trip odometers for total and electric distances) with the aid of regenerative energy capture. When this driver hooked up to the 240-volt charging station at CG Supreme World Headquarters, indicated full “refill” times were around three hours.

The Grand Touring’s hybrid hardware doesn’t affect its cargo capacity compared to other Corsairs. There’s 27.6 cubic feet of  cargo space behind the rear seats, which grows to 57.6 cu. ft. with the rear seat backs folded–decent room, considering that the Corsair is one of the smaller vehicles in its class. (The bag in the photo at left holds the charging cable.)

With more than half of his driving load handled electrically, your reviewer saw an overall average of 42.2 gas mpg. However, weighing gas use just within the 51.5 miles covered while the internal-combustion engine was on the job worked out to a more SUV-like 18.9 mpg. Hybrid horsepower falls between the ratings for Corsair’s 2.0- and 2.3-liter turbocharged gas fours, which gives it sufficient strength for pleasing—but not scorching—performance, even with the CVT doling out the power at a measured pace. To the same five dial-selected drive modes found in gas models—“Normal,” “Conserve,” “Excite,” “Slippery,” and “Deep Conditions”—Grand Touring adds two electric-specific modes: the aforementioned Pure EV, and “Preserve EV” (which recharges and saves battery power for a latter time). These two modes allow drivers to pick their spots for EV driving. Excite, which is Lincoln’s way of saying Sport mode, quickens throttle response a smidgen from operation in Normal but not enough to make caffeine seem like an expendable extravagance.

The Corsair Grand Touring is powered by a 2.5-liter 4-cylinder engine paired with twin electric motors for a total output of 266 horsepower. The charge port is located on the driver’s-side front fender; a segmented light ring around the port itself glows/flashes blue to indicate charging status and the level of charge.

In a broad sense, the Grand Touring bowed as a hybridized Corsair Reserve. Their standard-equipment complements were the same with the exception of the GT’s powertrain and adaptive suspension, the latter an extra-cost item for the Reserve. However, that was enough to peg the starting price (with delivery) at $51,485, or $5140 more than an all-wheel-drive Reserve. Even when set in Excite, which prompts subtle changes to driving dynamics from the adaptive suspension, Corsair favors comfort and driver ease to any assumption of sporty handling. Rolling on optional 20-inch alloy wheels in place of the standard 19-inchers, the tested Grand Touring rode well. 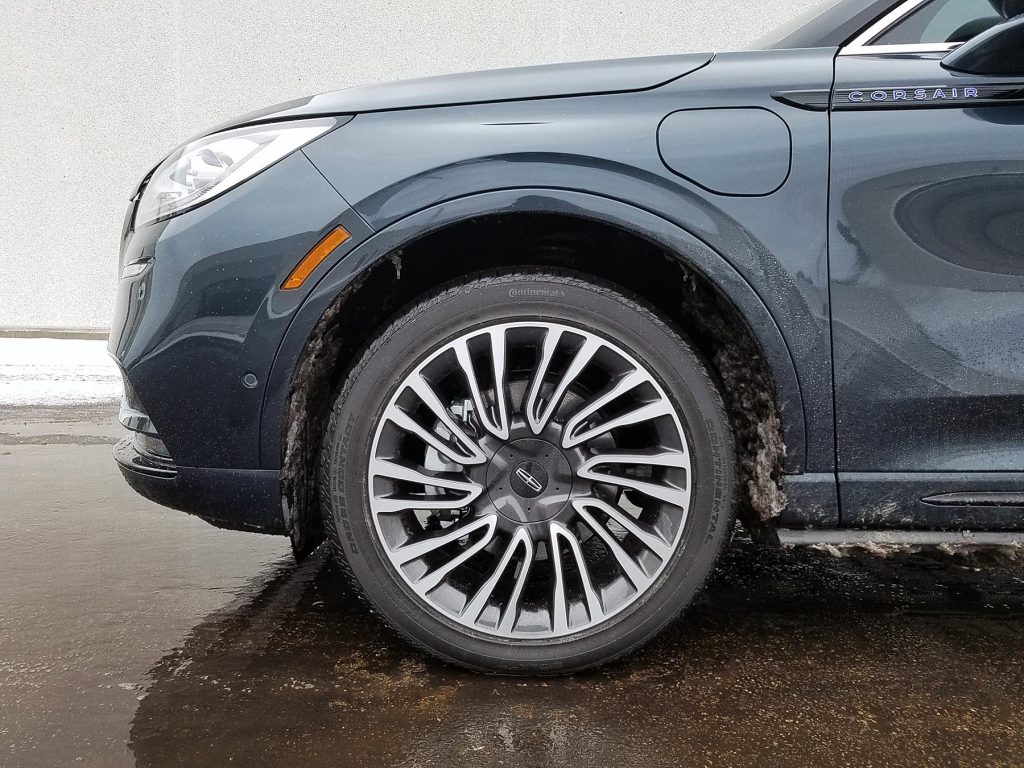 Our test vehicle was equipped with the optional 20-inch wheels ($2000).

There’s no difference in luxury or accommodations between the plug-in-hybrid and non-hybrid Corsairs. The hybrid battery tucks under the rear seat, where it doesn’t affect passenger or cargo space. With the adjustable 60/40-split rear seats up, the same 27.6 cubic feet of carrying space exists. Retract the seats—which fold almost flat—and capacity grows to an identical 57.6 cubic feet. A decently sized glove box, a modest covered console box, a net pouch on the back of each front seat, and small door pockets address needs for personal-item storage. Two open cup holders are in the console, and two more reside in the pull-down rear-seat armrest.

Most adults inhabiting the Corsair will enjoy plenty of leg- and headroom in either row and three adults might be able to settle in the second row. Door openings are big enough for easy entrances and exits, step-in height isn’t daunting, and drivers have fairly uncluttered sightlines. Lots of soft-touch surfaces and leather-upholstered seats (heated and ventilated in front) apply the plush, though some might find the seats a little stiff—at least this tester did.

The Sync 3 infotainment system with voice-activated navigation is standard. Sync 3 is fundamentally straightforward to use, especially for inputting audio presets, but there are a lot of systems and functions embedded within, so prepare for a learning curve. Get ready, too, for some unexpected (and maybe unwelcome) interruptions from the voice-command system. A button in the upper-left area of the steering wheel is right about where you’re sure to make accidental contact with it just as your favorite song is getting to the really good part. The standard dual-zone climate unit has a central fan-speed dial but buttons for everything else. Unorthodox horizontally arranged push buttons for the automatic transmission will take some getting used to before their use is second nature.

All this and more can be yours for $52,790 to start (including destination) in 2022. The starting price of the Grand Touring has been raised by $265 and the delivery tab has been bumped up by $100. The base front-wheel-drive model now starts at the same $36,370, but the Reserve trims a considerable $1960—seemingly by forfeiting the formerly standard panoramic sunroof—to begin at $41,090. Adding all-wheel drive to either of the gas-engine Corsairs costs $2300, an increase of $100 from 2021. Aside from price changes, there is some repackaging of option groups and paint colors get a shakeup. 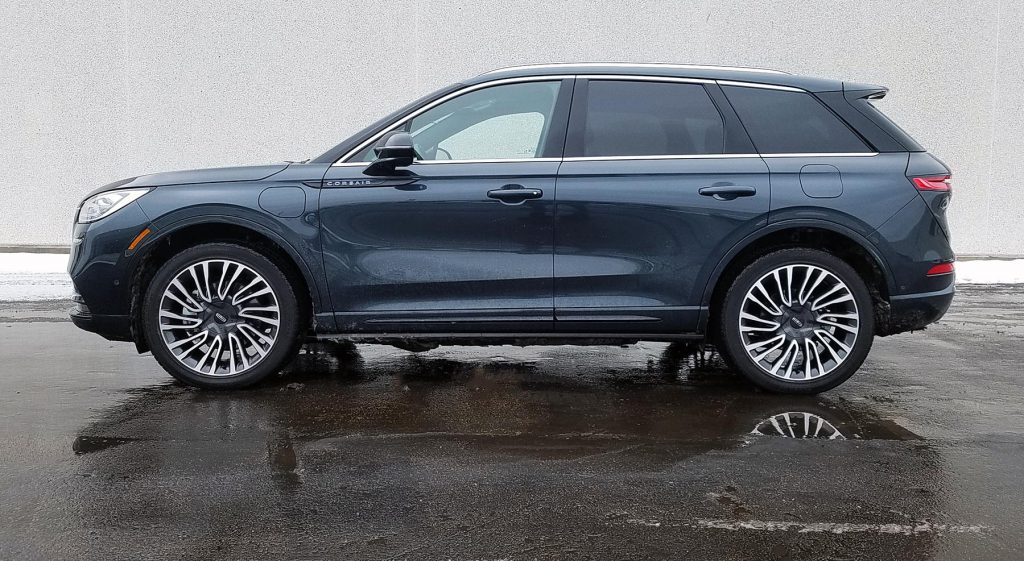 The Grand Touring brings the efficiency and versatility of a plug-in-hybrid powertrain to the Corsair lineup, but that capability comes at a significant price premium… and adding options pushes the price up even further. 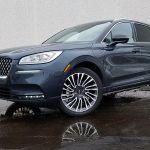 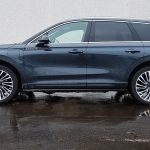 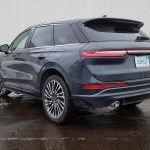 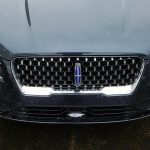 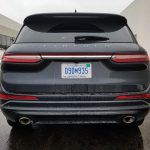 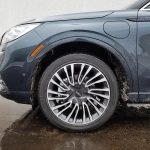 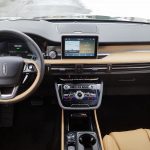 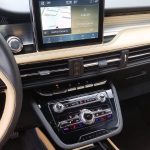 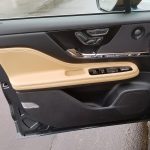 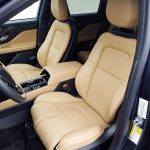 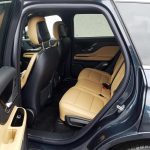 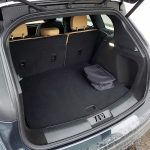 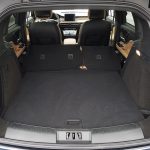 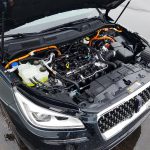 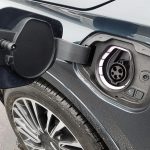