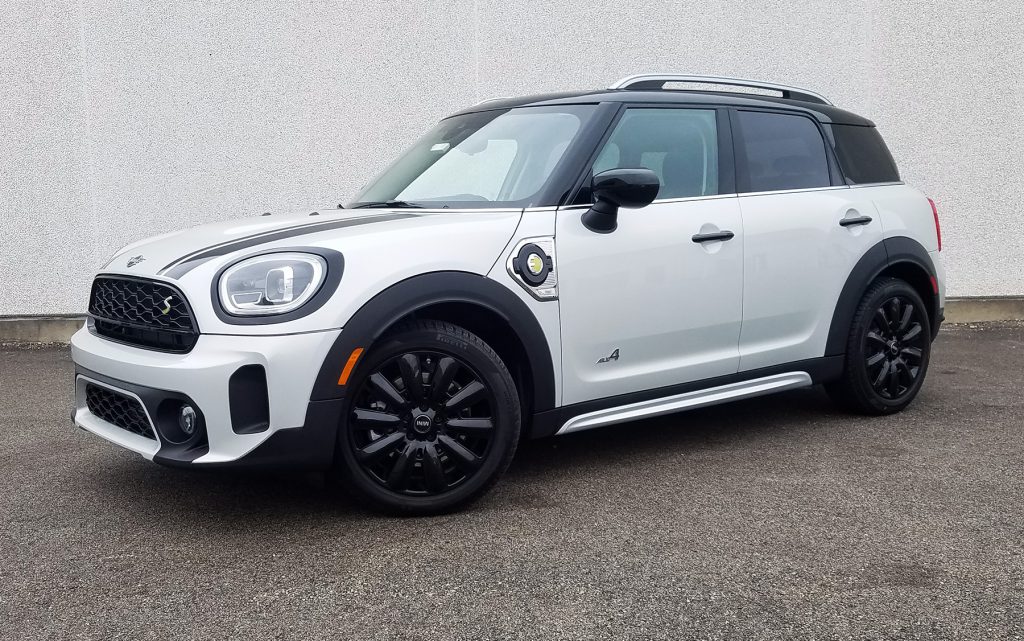 The good: Fun, expressive styling inside and out; lots of options for personalization

The not so good: Pricey for its class; not as much cargo room as most competitors

Color us surprised. In 2018, when we last tested a Mini Cooper Countryman plug-in hybrid, we noted that it was the only gas/electric vehicle in the extensive subcompact crossover-SUV segment. Three years later, in an automotive world increasingly coming to terms with electrification, that still holds true. 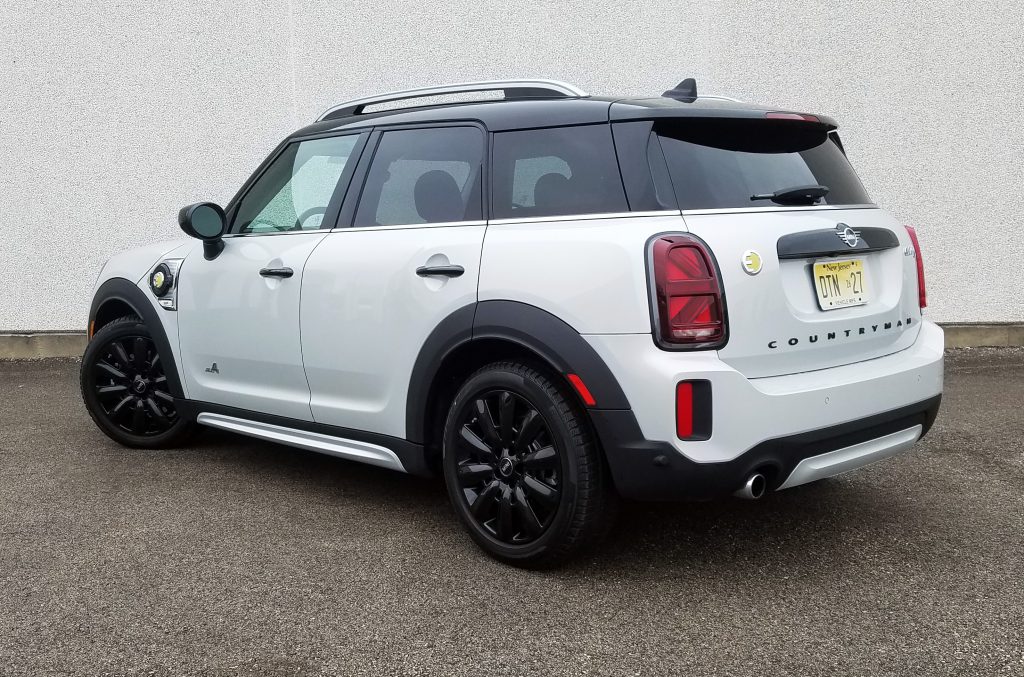 Like all Minis, the Countryman PHEV offers plenty of options for customization. Our tester was outfitted with a black roof and mirror caps in addition to black hood stripes (a $100 option). Taillight lenses with a molded-in “Union Jack” British-flag pattern are among the styling updates for the 2021 model year.

Technically, at least. We acknowledge the pure-electric Hyundai Kona Electric but point out that its sale is limited to 10 states with the strictest emissions regulations. Also, moving up in class to the premium-subcompact group finds a mild-hybrid Range Rover Evoque, conventional-hybrid Lexus UX 250h, and a full-electric Volvo XC40 Recharge. 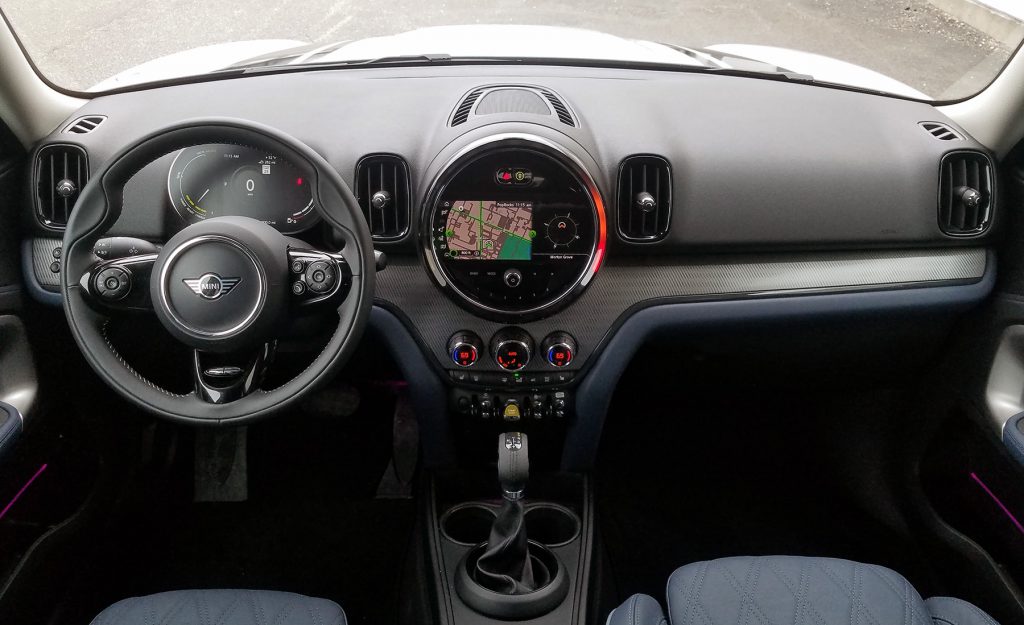 A fully digital instrument cluster (which replaces the previous analog-speedometer unit) is among the Countryman’s updates for 2021. Mini’s dashboard styling sometimes prioritizes whimsy over traditional ergonomics, but most controls become familiar after a bit of practice. The start/stop control is the yellow toggle switch just above the shifter.

Perhaps the Countryman SE’s “isolation” has something to do with the cost associated with going electric, even partially. Hybrids and EVs just cost more than their fully fossil-fueled twins. Indeed, the Signature-trim hybrid Countryman that Consumer Guide sampled had a starting price $9400 higher than the gas-engine job of the same grade. Manufacturers in the “value” end of the segment may be leery of issuing models that sticker for lots more than their nameplates suggest. But Mini, already positioned at the high end of this price class (as CG defines it), might be more willing to run the risk of raising eyebrows for the chance to offer something unique. 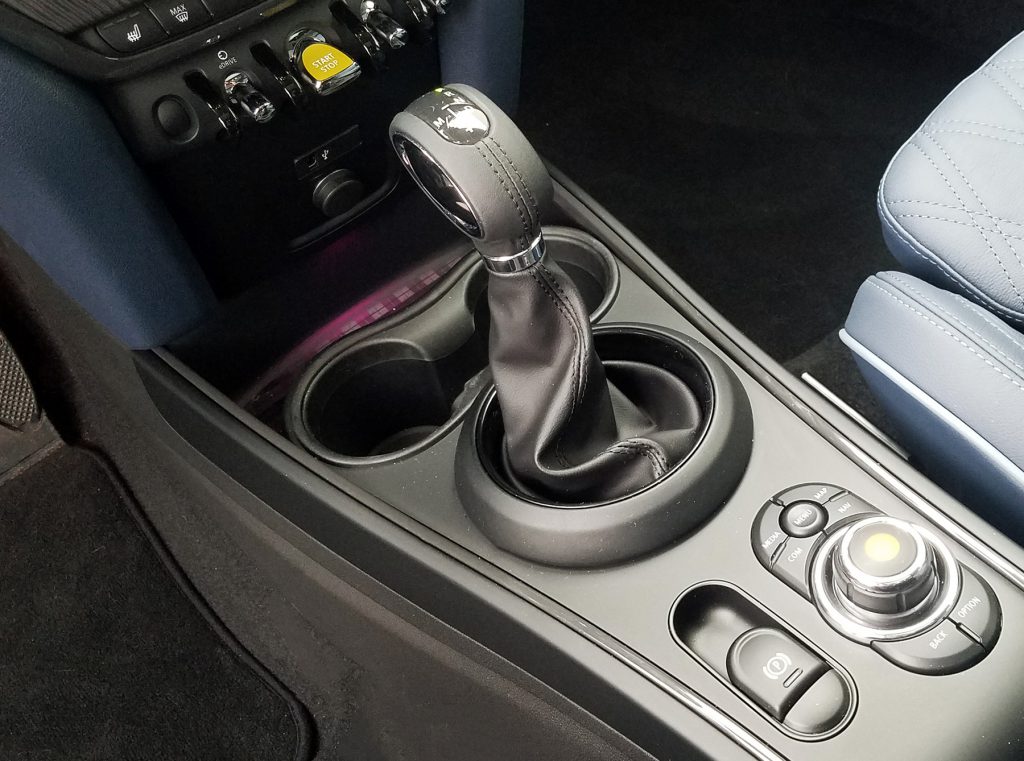 The Countryman SE, which as a Signature starts for $42,350 including delivery, is the only plug-in hybrid subcompact SUV regardless of class. For 2020, a 31.6-percent boost in battery capacity raised its pure-electric operating range from 12 to 16 miles. An “eDrive” button allows drivers to tailor how and when the juice gets loose, helpful for short hops that could conceivably be run without need of the internal-combustion engine. When this reviewer hooked up to CG’s 240-volt charger on a day with air temperatures in the mid teens Fahrenheit, the vehicle-information display reported it would take about three hours to charge fully from the 6-percent reserve still left in the battery.

While the 10-kWh lithium-ion battery extends all-electric range, it doesn’t change overall power. Maximum system output is the same 221 horsepower and 284 lb-ft of torque as ever. The gas part of the equation is a turbocharged 1.5-liter 3-cylinder engine of 134 horsepower and 162 lb-ft. The transmission is a 6-speed automatic. Of course, even without full EV capability the Countryman SE operates as a conventional hybrid in low-power situations. Transitions between the electric and gas powerplants are pretty seamless, but the gas engine is a little grumbly. Drivers can select “Mid,” “Sport,” or “Green” modes to tweak fuel delivery. The hybrid shows fairly snappy acceleration and easy highway cruising in Mid or in Sport. There can be a moment’s delay when the pedal is tromped from rest or in a slow rolling start, but then acceleration builds quickly. Green mode tamps this down somewhat. 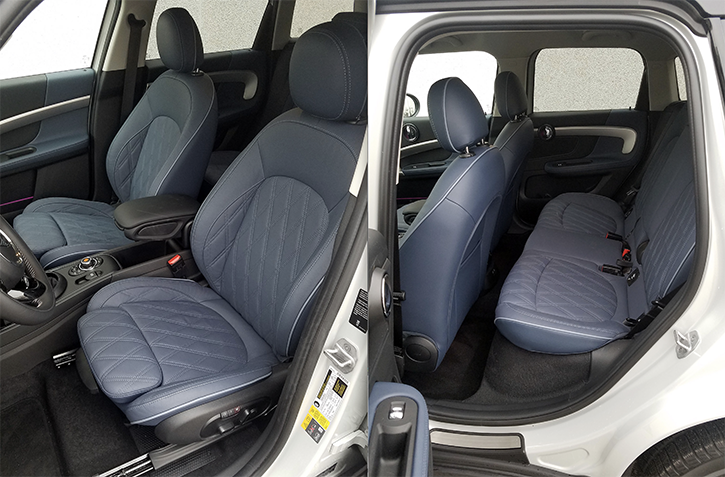 Our test vehicle was equipped with the Signature Upholstery Package, which added a Mini Yours steering wheel, sport seats, and Shaded Silver trim. Chesterfield Leather upholstery in Indigo adds personality without being overpowering.

With expanded EV capability, the EPA combined fuel-economy estimate rose to 73 MPGe, with 29 mpg projected for gas-engine operation. After this driver went 72 miles in the test vehicle with 42 percent city-style operation, he recorded 30.4 mpg.

The Countryman PHEV offers 17.4 cubic feet of cargo space behind the rear seats, and 47.4 cu. ft. with the rear seat backs folded, which puts it on the less-capacious end of the subcompact SUV class.

Standard ALL4 all-wheel drive puts all four wheels in play when both power sources are working simultaneously. When operating as an EV, the rear wheels do the driving; when the gas engine is at work by itself, it powers the front wheels. Ride is firm, steering is direct (and sharper in Sport mode), and cornering lean is nicely controlled. There is some of the indifferent pedal feel endemic to hybrids with regenerative braking that contributes to battery recharging, but ultimate stopping power is still quite good. 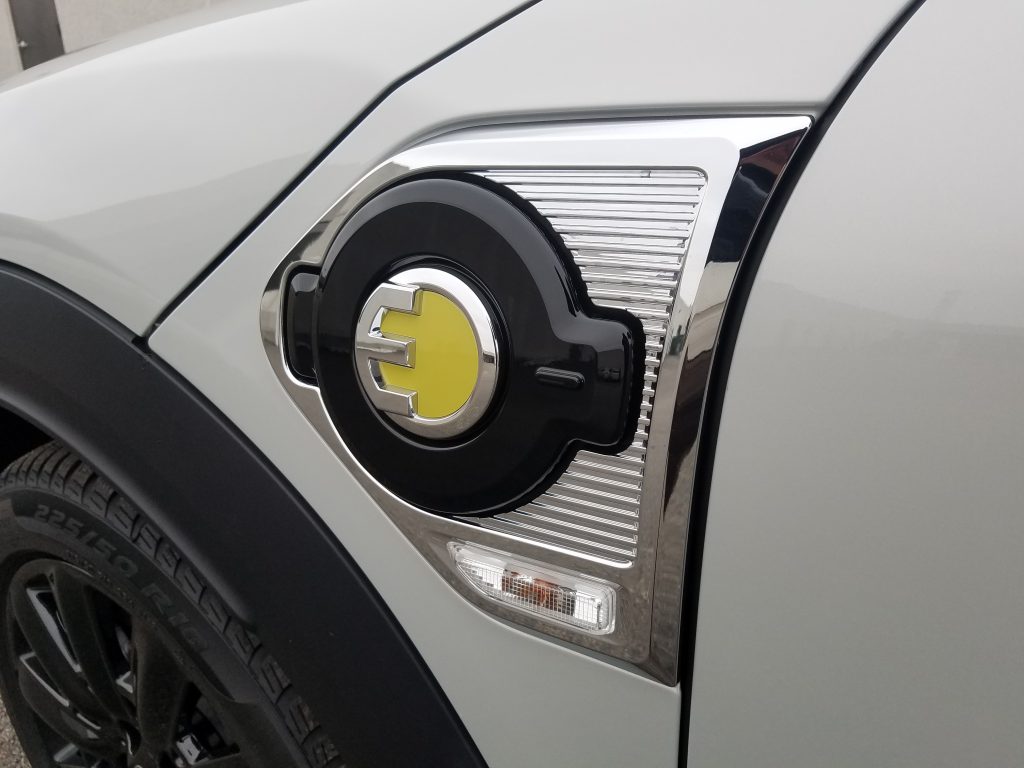 The Countryman PHEV’s charge port is hidden behind this driver’s side trim panel (scroll down to the gallery to see a pic of the charge door open).

Much of what is new for the ’21 Countryman hybrid is cosmetic: two new exterior colors; optional piano black exterior trim; restyled headlights, grille, and front bumper; taillights with Union-Jack surface detailing; and new wheel options. Inside are changed surfaces and upholstery, a digital instrument cluster (that no longer tilts with the steering column), and a new design for the central instrument display. The redone central display retains a large, round screen in the center of the dash for audio, navigation, and other things like hybrid-system monitoring, however for the available space, some of the wording is small and not easy to read—an issue that also affects the more-compact cluster of driving gauges. “Busy” console-controlled infotainment is still utilized, but convenient rotating dials remain to set temperatures and fan speed for the dual-zone automatic climate system.

The Countryman PHEV’s powertrain is a turbocharged 1.5-liter 3-cylinder paired with a 87-hp electric motor for a total output of 221 hp. Eighteen-inch wheels are standard; ours were the “Pin Spoke” design finished in black.

The hybrid infrastructure robs the plug-in Countryman of a little rear-seat headroom and rear cargo space, but it appears that folks up to maybe 6 feet tall will clear the roof—and find enough legroom to enjoy the ride. The front sport seats, included on the test car as part of the Signature Upholstery Package option, provide added side grip for aggressive driving, but they’re firmer than some folks might prefer. Cargo room isn’t bad with the rear 40/20/40 seats up, and there’s an underfloor bin handy for holding the 120-volt home charger and maybe other small items. The rear seats fold almost flat but leave a gap between them and the cargo floor. Storage for personal items is handled by a large glove box, big door pockets with bottle holders, an open bin under the flip-up armrest, a small covered bin within the armrest, and pouches on the backs of the front seats. Two exposed cup holders are in the console.

Buyers may qualify for up to $5002 in one-time federal tax credits, beyond any local incentives that might exist. That can take some of the sting out of the price required for the Countryman SE’s individuality. 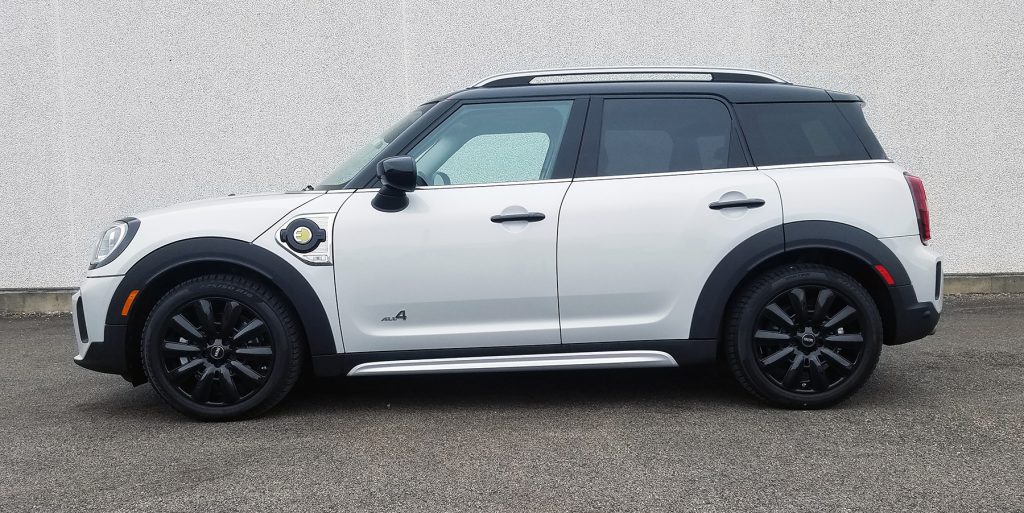 The Mini Cooper Countryman is the most premium–and priciest–member of the subcompact SUV category. You’ll pay an additional premium for the ALL4 PHEV trim level, but gain plug-in-hybrid capability for better all-around fuel economy and pure-electric driving for short trips… with little compromise to the Countryman’s fun-to-drive character. 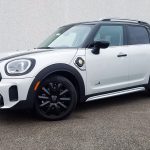 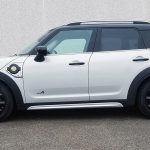 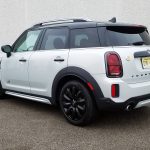 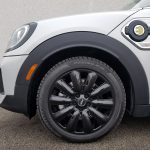 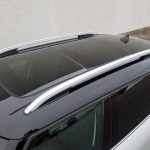 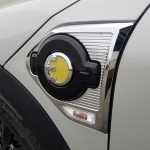 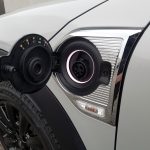 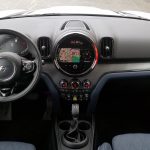 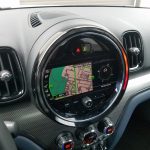 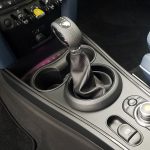 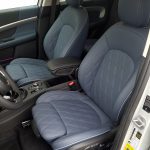 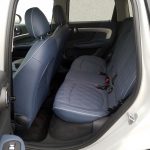 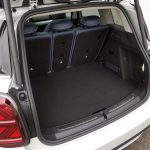 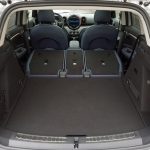 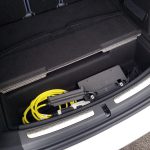 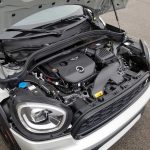