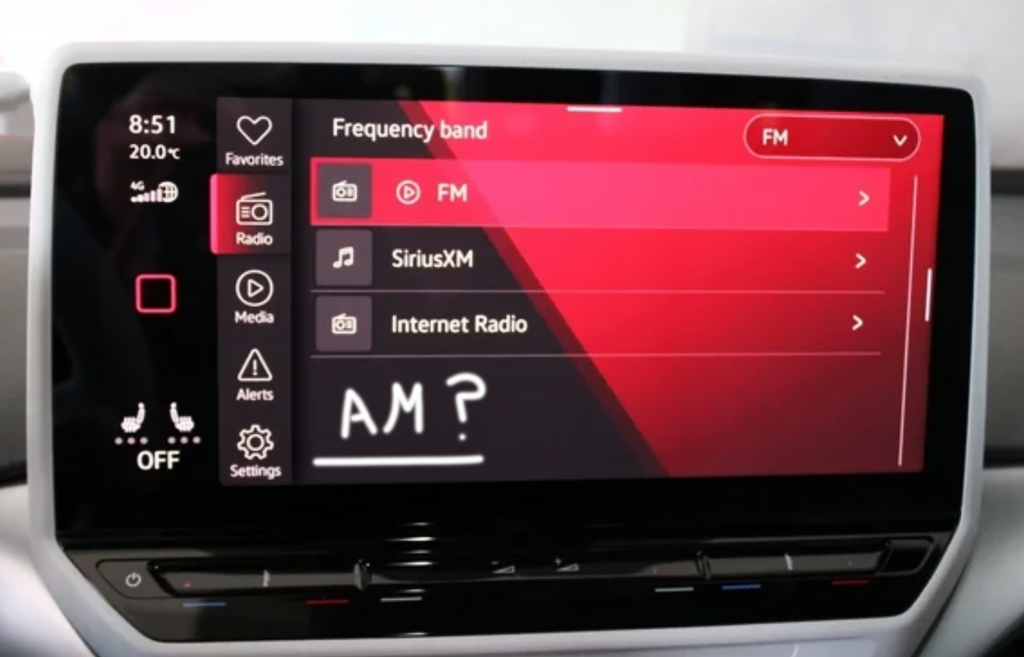 The all-electric 2021 Volkswagen ID.4 is not available with AM radio.

At this point it’s fairly clear that electric vehicles are the future, but the road to get there is full of hurdles big and small. One of the smaller challenges, at least for a good number of traditional consumers, is this: Electric cars have a problem with AM radio. Why? Because the electric motors that power their drive wheels, propelling the vehicle, also tend to generate electromagnetic interference with AM broadcast reception.

Porsche, for one, has advised that this interference may result in static and crackling sounds. Other automakers point out such possible audio annoyances as distortion, buzzing, and signal fading.

Note that the interference potential applies only to “terrestrial” AM radio. That’s the ground-based transmission method whereby signals are sent from the broadcast transmitter through the air, directly to the radio receiver. Electric motors have no impact on internet-based streaming audio. FM radio reception also is unaffected.

What Causes the Static?

Many electronic components, including electric motors, have always produced static of some sort. Electric cars are powered by one or more electric motors, fed by a rechargeable battery. Rapidly fluctuating voltage results in the high-level, low-frequency electromagnetic interference that reaches into the radio.

Electromagnetic frequencies generated by EV motors happen to be comparable in wavelength to AM radio signals. The competing signals clash, effectively cancelling each other, as if they were opposing forces. As EV motors grow more powerful, AM static tends to increase.

Concern about electromagnetic interference is nothing new. Back in 2016, a Tesla spokesperson wrote that “AM audio quality can be very poor” in a full-electric car. BMW noted that it had recognized the interference problem early, in its 2009 Mini E and 2012 ActiveE models.

BMW took the lead in skipping AM radio, when the German automaker introduced the i3 sedan as a 2014 model. A spokesperson explained at the time that electric-motor interference was the reason. If AM were not disabled in the i3, unhappy customers were likely to complain about poor sound quality. BMW’s performance standards were very high, the explanation continued. No product that failed to comply would be acceptable.

Tesla followed suit in 2018, omitting AM radio in the original Model S as well as the newer Model X, while introducing an updated internet-radio option. No current Tesla product offers terrestrial AM radio.

Among recently introduced and coming-soon models, Porsche deleted AM radio from its new-for-2019 Taycan’s standard-equipment list. No Audi full-electric models come with AM radio reception, led by the e-Tron. “We don’t want our drivers to have a poor experience,” an Audi spokesperson advised. Many “radio favorites are available seamlessly through digital signals,” via a cellular or wi-fi connection.

Mercedes-Benz hasn’t released a features list for its forthcoming EQS battery-electric sedan, because it won’t reach dealerships for a while yet. We wouldn’t bet that terrestrial AM radio will be included in a car that hovers around the $100,000 neighborhood.

The EV’s “drivetrain generates frequencies that heavily interfere with AM … signals,” a Mercedes-Benz representative explained. “This leads to static, buzzing, and distorted sounds that can overwhelm and block out the broadcast [and] lead to customer dissatisfaction.”

No specific word yet on audio prospects for Cadillac’s new Lyriq, the GMC Hummer large EV pickup – or for a new brand in town, the Lucid Air, scheduled for unveiling in September 2021.

As for more-mainstream models, Ford is keeping AM radio in the Mustang Mach-E, as well as the new F-150 Lightning pure-electric pickup. A GM spokesperson told the Wall Street Journal that the company was aware of AM reception problems and had “taken steps,” but no details were supplied.

Not every automaker wishes to comment. Some stay mum on details of new models that have not yet been introduced. 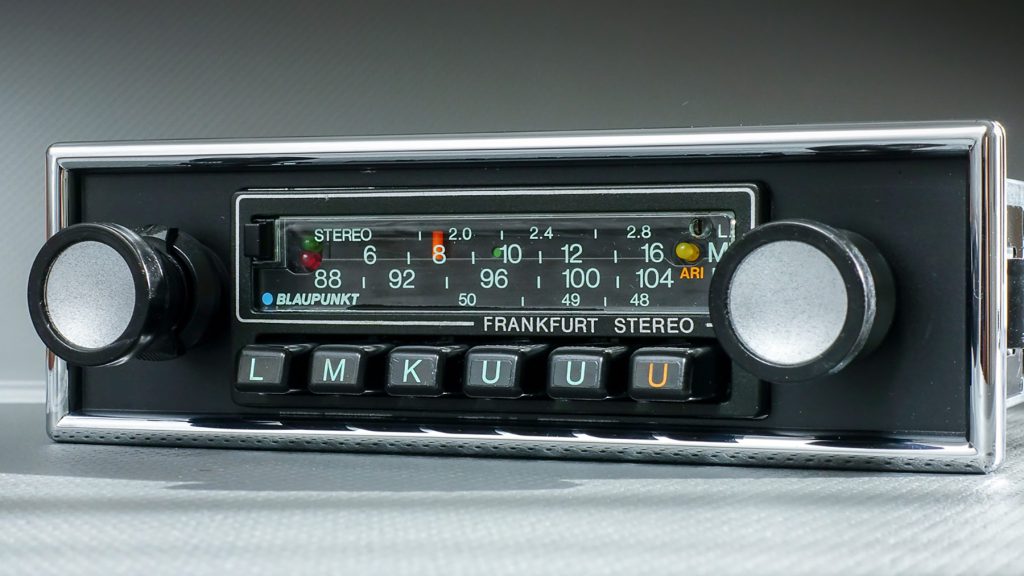 Broadcast AM radio is uncommon on the Continent, possibly disincentivizing European automakers from developing a fix for the interference issue.

Engineers have found no easy way to eliminate this interference, without adding excessive weight to the car or dollars to its price. As early as 2016, German engineers were said to be working on a prototype that would minimize interference by adding shielding to various cables and wiring components, and increasing insulation around the electric motor. One analyst asserted that Tesla engineers struggled with the early Model S, striving to make AM reception acceptable.

A Toyota expert told the Wall Street Journal that the auto industry faced a comparable challenge long ago, when gasoline cars first began offering AM radio. At that time, they were plagued with noise from the tiny motors in heater fans. As time passed, shielding and other methods helped suppress that bothersome interference.

AM radio has been declining in popularity for years, but it’s still favored for traffic, weather and news broadcasts during morning commutes. AM fans point out its benefits.

FM delivers higher sound quality – especially for music – but AM signals can travel farther. AM stations cost less to run, allowing more transmission of niche broadcasts, such as foreign-language, religious, and special-interest programming.

In BMW forums following the i3’s debut, some customers complained about lack of AM radio. A few even said they wouldn’t buy one without it.

As reported by the Wall Street Journal, the National Association of Broadcasters criticized BMW’s 2014 decision, advising that “AM radio continues to serve an important role in America’s cultural landscape.” Later, the NAB insisted that “this narrative that somehow AM radio is dying is silly.”

Most major AM radio stations make their programing available in real time on streaming services, including iHeart Radio and TuneIn. WCPT AM 820 in Chicago, which broadcasts the Consumer Guide Car Stuff Podcast, is available on both platforms.

Internet-based audio streaming is displacing traditional AM radio reception, which could possibly end up joining cassette players and ashtrays as relics of the past.

Automakers are turning toward this and other options to replace true AM radio. Mercedes-Benz suggests multiple alternatives, including satellite radio, Internet streaming, and numerous AM simulcasts on HD FM radio. Teslas use a service called TuneIn, which allows users to listen a variety of audio content, including more than 100,000 radio stations from around the world.

Back in the age of crystal sets and headphones, and into the postwar years, intense folks sat hunched over their radios listening to WWL, out of New Orleans. Broadcasting since 1922, it was best heard late at night, when signals traveled the farthest.

As depicted so colorfully in the 1973 film American Graffiti, rock-loving Sixties teens were enthralled by the flamboyant style of DJ Wolfman Jack, broadcasting from XERF in Ciudad Acuña, Mexico. XERF was one of the breed of high-powered radio stations dubbed “border blasters,” which could be heard clearly across the U.S. southwest and beyond. 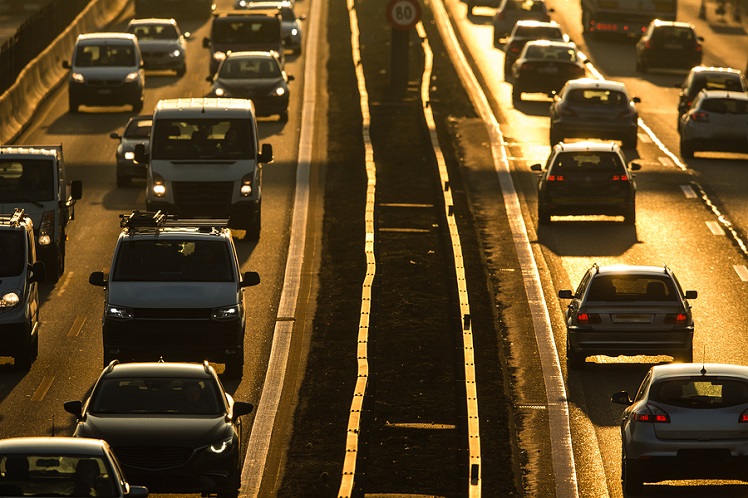 The average commuter spends almost an hour a day in the car–plenty of time to listen to something, including the radio.

To AM fans, FM might be deemed elitist, high-falutin’, somber – the domain of classical music devotees. AM comes across as working-class: raucous, loud, unrestrained.

In the view of automakers, a luxury motoring experience should be accompanied by premium audio entertainment. A touch of static and crackling might be tolerable in a lower-priced automobile, but taboo in a luxury vehicle. Unwanted sounds might be less noticeable, too, if the budget-priced car is a tad on the noisy side.

Up to now, at least, only luxury cars have made the change. Most full-electrics (especially middle/low-end) still install AM.

So, is AM radio doomed? Not yet, at least, as a reported 150 million Americans listen to at least some radio each day, especially commuters seeking news, weather, and talk radio.