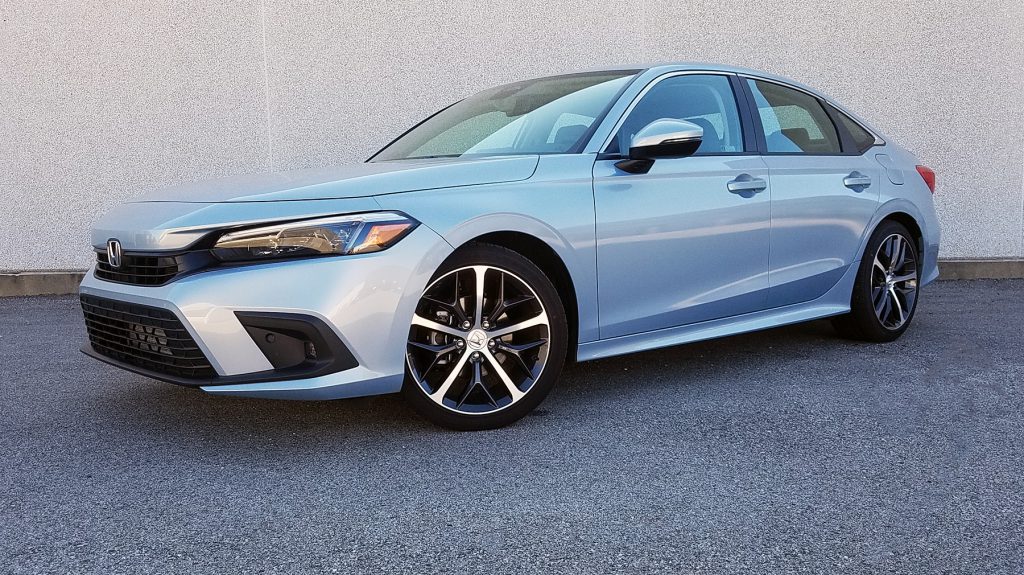 The not so good: Our observed fuel economy was below EPA estimates; seating position might be too low for some drivers’ tastes; manual transmission is not offered on sedan models

All that Honda has done to the Civic for 2022 is just make it into a great compact car. Of course there is the obligatory styling redo for a next-generation vehicle, but that’s merely the wrapper for new safety features and updates to the tech complement. If maybe not a thrill show to drive, the ’22 Civic feels balanced and solid on the road. 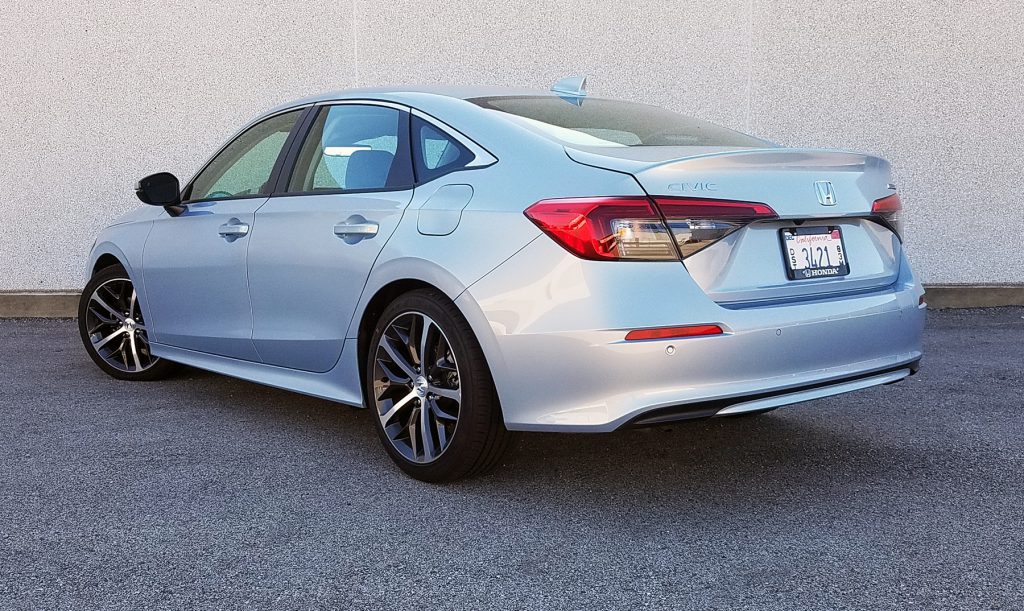 The Honda Civic is redesigned for 2022, gaining a host of new safety/technology features and a more “grown-up” look than the previous-generation model. Sedan models hit the market first, followed soon after by a four-door-hatchback body style. The hatchbacks will offer an available manual transmission, but the sedans are automatic-only.

Even in the premium-trim Touring example that Consumer Guide editors drove the Civic sedan is a solid value. With an extra-cost Morning Mist Metallic paint job and delivery added, the final price still stopped short of $30,000. Without delivery, stickers for the LX/Sport/EX/Touring sedan lineup begin at $21,700 for an LX. (There’s a parallel roster of hatchbacks, too.) The Touring represents a $3600 jump from the EX—the biggest gap from one trim level to the next in the product line—but it earns it with the following exclusive standard equipment:

All Civics get an attractive new dashboard design with a clever mesh trim insert that hides the HVAC vents. Touring models get an exclusive, fully digital 10.2-inch instrument panel; other Civics have a 7.0-inch digital display with a physical speedometer. A wireless charger at the leading edge of the console is another Touring exclusive.

The configurable digital instrument display, wireless smartphone connectivity, and blind-spot monitor are new, as are wireless device charging, rear-seat side airbags, Traffic Jam Assist, and a revised front collision-warning system designed to recognize hazards and road features more quickly and accurately. (The last two are part of the Honda Sensing suite of safety monitors standard throughout the line.) 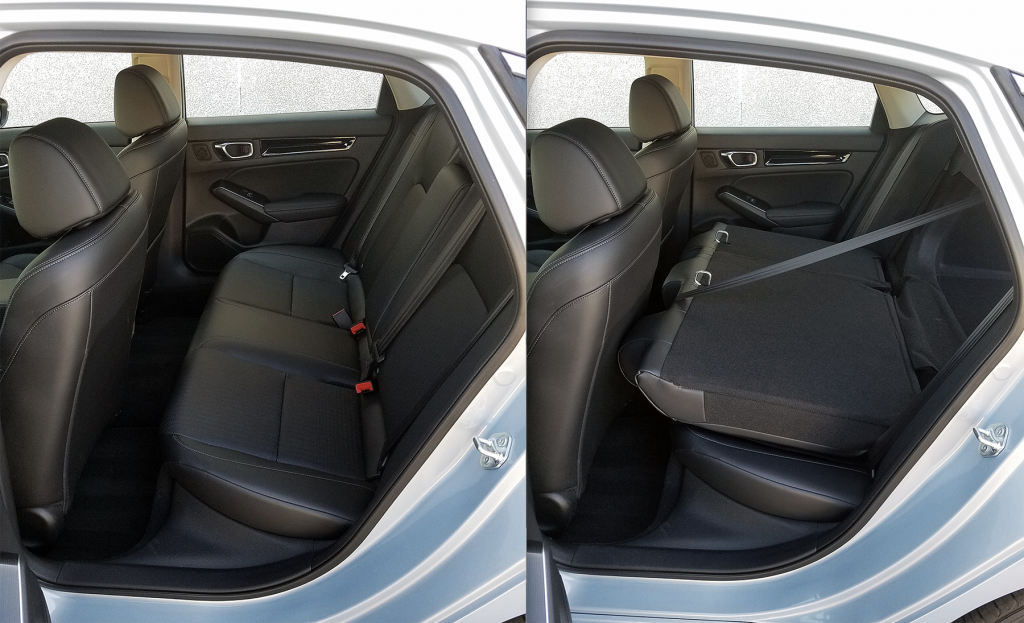 Civics have typically offered generous rear-seat space for a compact car, and the new 2022 model keeps up the tradition. There’s enough space here for average-sized adults to be comfortable, but both the front and rear seats are set quite low to the ground, even for a compact car–the seating position will feel especially low to passengers accustomed to crossover SUVs. The rear seat backs fold in a 60/40 split on EX and Touring models.

Styling is different front to back, with a blunter grille/hood aspect than before. There’s still a diagonal lower-body “bone line” that rises as it approaches the rear wheel openings, but now it’s sculpted outward rather than serving as the point at which the sheetmetal tucks inward. The Touring is the only model available in all eight available paint colors, three of which come at a price premium. Inside there’s a clean new instrument panel with a stand-up touchscreen. The panel is decorated with a full-width band of honeycomb mesh that also disguises the climate-system vents. It presents a strikingly different look from other commonly used trims and its unbroken consistency across the instrument panel makes the cabin seem wider. 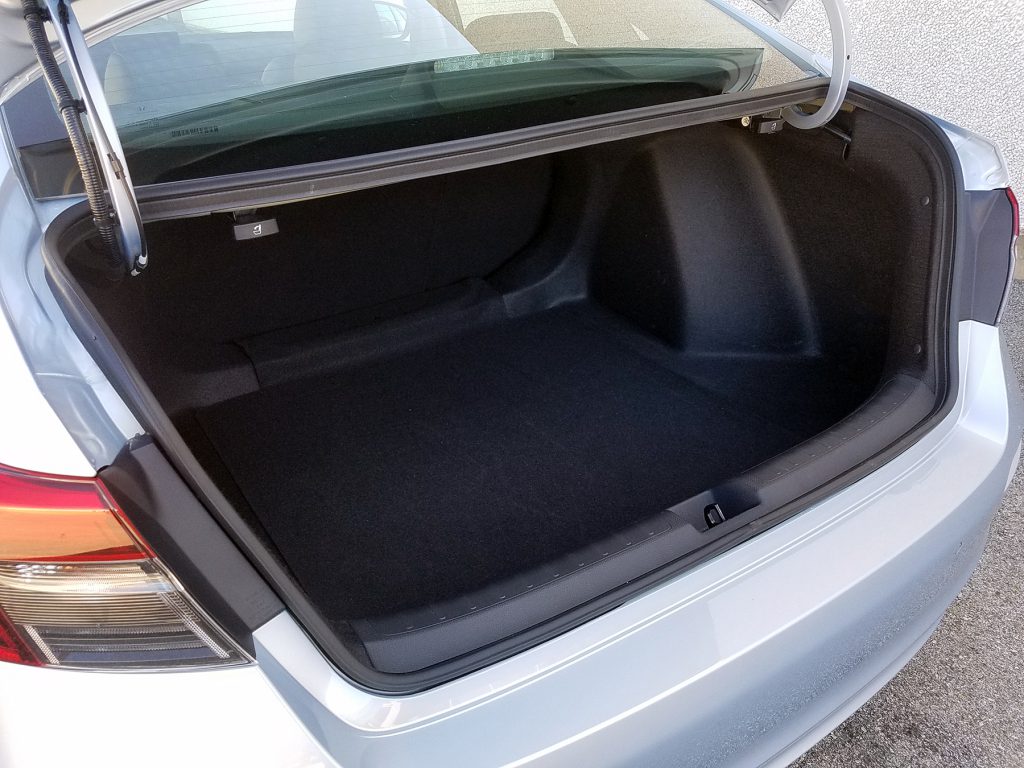 Not that the 2022 Civic isn’t truly roomy for a small car—even if passenger space is nearly identical to that of its predecessor. Critically, there’s good head- and legroom for two adults in the rear seat. In-cabin storage falls to smallish glove and console boxes, decent-sized pockets in front doors, a pouch on the back of the front passenger seat, and bottle-holder pockets in the rear doors. Paired cup holders reside in the console and in the pull-down central rear armrest found in EX and Touring models.

All things considered, general ambience in the Touring is quite nice for a car of this class. Its top-of-the-line upholstery and audio system up the ante for an interior that includes a leather-wrapped steering wheel and shifter knob, and soft surfaces on the dash, armrests, and tops of the front doors. The infotainment system is easy to use (typical of Honda at present), the upgraded driving controls are colorful and legible, and the dual-zone climate control relies on three convenient dials and a very few large function buttons.

Cargo capacity is 14.4 cubic feet in the Touring, 0.4 cubic foot less than other models. The trunk has a flat floor but wheel houses considerably narrow the cargo area as it approaches the rear seat. The seat folds in a 60/40 split, but it rests a little above the level of the trunk, and a bulkhead raises and narrows the passage from trunk to rear seat. As in other Hondas, the retracted seat exposes the large eye-hook catch that holds the seatback in place when raised. This is an obstacle that may get in the way of or damage some longer objects.

The Civic’s turbocharged 1.5-liter 4-cylinder is carried over from the previous Civic; it makes a respectable 180 horsepower. Touring models come standard with 18-inch wheels with Shark Gray-painted inserts.

The ’22 Civic Touring is powered by a turbocharged 1.5-liter 4-cylinder engine, which doesn’t sound like anything new except that its 180 horsepower at 6000 rpm represents a gain of six ponies from before. Peak torque is a modest 177 lb-ft but at least it is available early on at 1700 rpm and remains in effect up to 4500 revs. The sole transmission in sedans is a continuously variable automatic—a 6-speed manual remains available but only for Civic hatchbacks. The powerteam delivered peppy around-town performance and enough speed for safe highway merging and passing. Better yet, it did so without undue noise or vibration. Drivers have access to “Normal,” “Econ,” and “Sport” driving modes, albeit with only slightly different driving sensations between them.

Exterior styling is more subdued than the previous-gen model; the new Civic adopts something of a “mini-Accord” look, taking after Honda’s midsize sedan. In our opinion, the new styling is more dynamic in person than in photos.

The EPA projects the Touring sedan will deliver 31 mpg in city driving, 38 mpg on the highway, and 34 combined. This driver would have liked to have seen that. His 116.3-mile test stint composed of 59 percent city-type driving came in at a slightly underachieving 30.4 mpg.

Steering and handling in the test car were pleasingly responsive, and ride was nicely composed. At 3077 pounds, the Touring is the heaviest of the sedans, so that thicker 17.5mm stabilizer is welcome in the multi-link rear suspension. MacPherson struts hold up the front end.

This latest Civic proves that Honda isn’t giving up on the people who still prefer a small car to a small SUV. With its range of prices but solid core of features, small-car buyers can easily give in to the Civic. 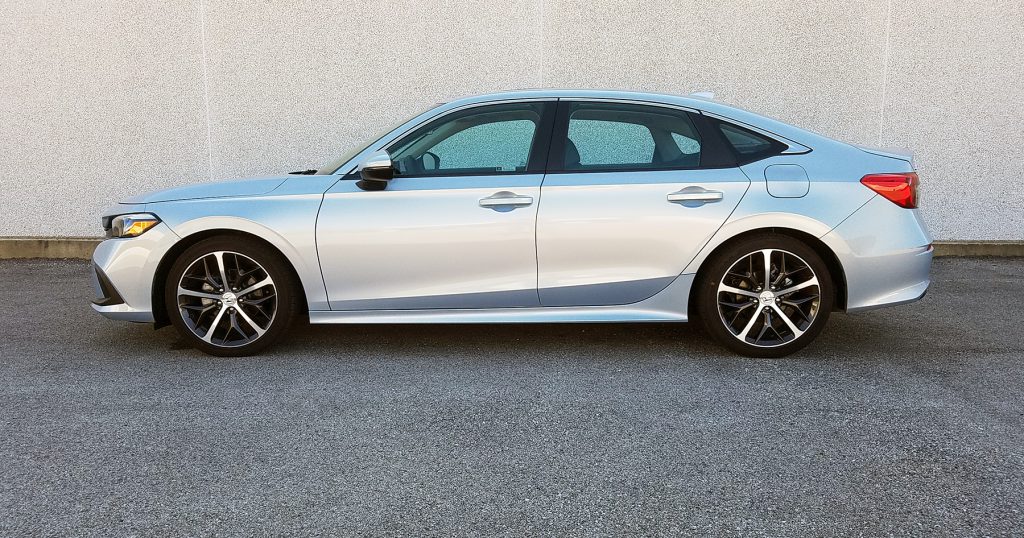 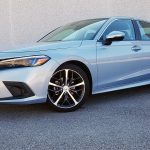 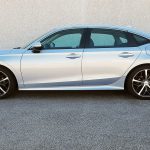 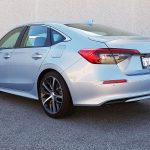 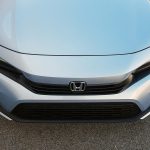 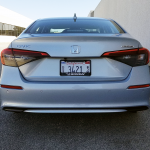 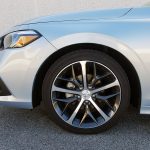 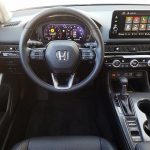 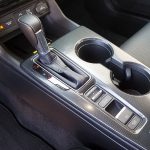 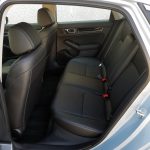 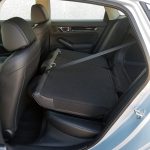 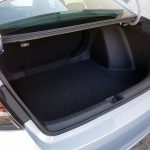 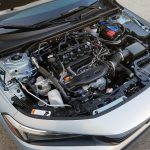