The Cars of The Great Gatsby 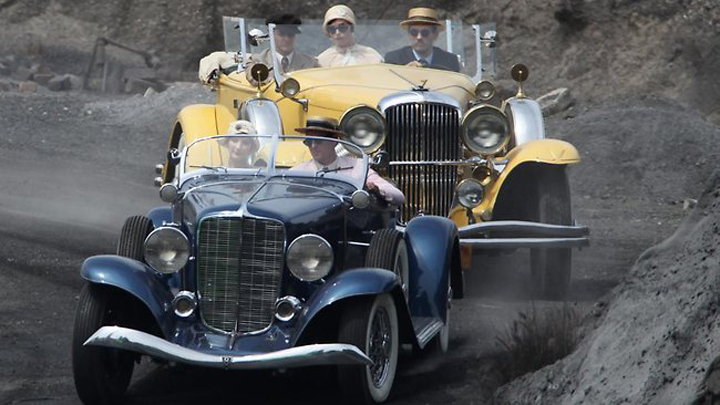 In a scene from the 2013 film, Gatsby drives Daisy in Tom’s blue car (a 1933 Auburn) while Tom drives Gatsby’s automobile (a 1932 Duesenberg) with Nick and Jordan as his passengers. Obviously, these 1930s vehicles are not right for the story, which was set in 1922. By the way, the Auburn shown here is  authentic, while the Duesenberg is a replica.

Cars were an important part of the Jazz Age and of F. Scott Fitzgerald’s The Great Gatsby. Fitzgerald mentions only two cars by make in The Great Gatsby— Nick Carraway’s Dodge and Gatsby’s Rolls-Royce. The rest are left to the reader’s imagination.

Jay Gatsby’s Rolls-Royce plays a crucial role in the story and is described as having “a rich cream color, bright with nickel, swollen here and there in its monstrous length with triumphant hat-boxes and supper-boxes and tool-boxes, and terraced with a labyrinth of wind-shields that mirrored a dozen suns.” Jay Gatsby embodied conspicuous consumption, and a Rolls with flamboyant coachwork in a bright color suited him. The 1928 Rolls-Royce Phantom I Ascot dual-cowl phaeton used in the 1974 production of The Great Gatsby is the perfect embodiment of the Gatsby car—except that it’s too new. The novel was published in 1925 and was set in 1922. Imagine this 1922 Rolls-Royce Silver Ghost painted yellow.

Cars of  The Great Gatsby 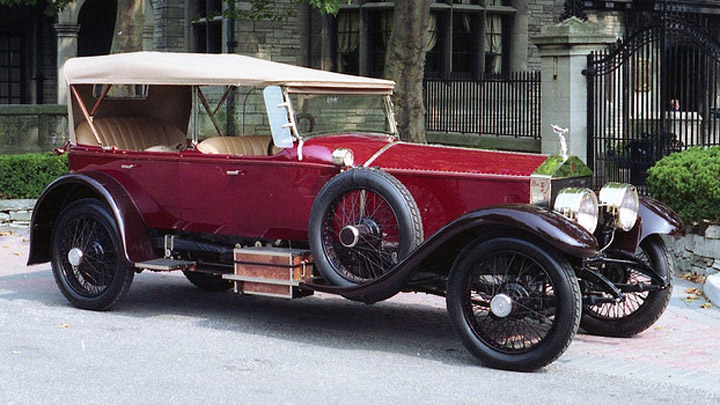 We know that Jay Gatsby drove a Rolls-Royce, but we don’t know the year or make. We imagine him in this 1922 Rolls-Royce Silver Ghost, although it would be painted a different color.

This is a 1928 R-R Phantom I Ascot dual-cowl phaeton, which was used in the 1974 Gatsby film. Jay Gatsby couldn’t have driven this car; the book was published in 1925.

While trying to get established as a bond salesman, narrator Nick Carraway made do with an old Dodge. Dodge was a step above the Ford Model T, with slightly more power and a sturdier build than Ford’s flivver. The Dodge would have been dependable transportation for Nick. 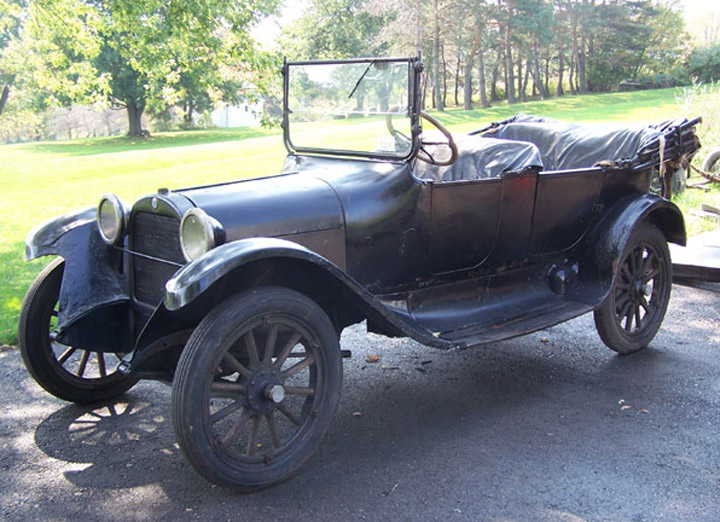 Nick Carraway drove an old Dodge, according to the book. Perhaps this 1919 Dodge?

In a flashback to 1917 Louisville, Jordan Baker remembers seeing Daisy with Gatsby in her roadster. Daisy’s family had money, but it’s unlikely that teenage Daisy would have had a Packard or Pierce-Arrow roadster. A medium-priced but stylish roadster, such as this 1917 Jordan, would have suited Daisy. 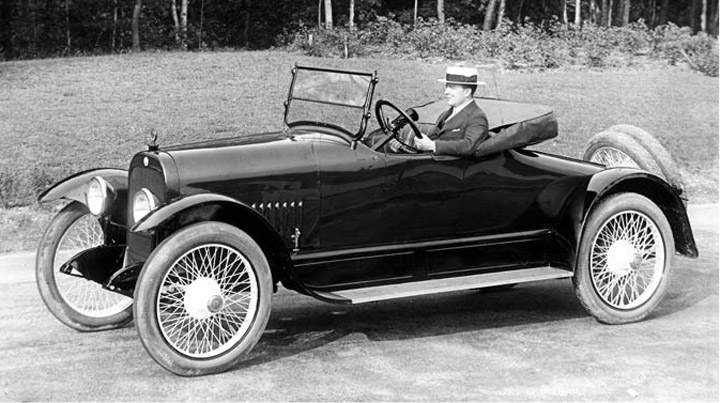 We can speculate that Daisy drove this 1917 Jordan roadster. (Or maybe this guy spent his time driving Miss Daisy? Wait—wrong movie!)

Tom Buchanan’s car is mentioned as a blue coupe. Tom was from old money and had no reason to impress anyone. A Marmon 34 would have been a proper car for Tom. Marmon was an expensive car that combined sport and luxury. Yet the Marmon styling was in quiet good taste. Fitzgerald’s first car was a used Marmon, and even though it was troublesome (probably because of abuse from both Scott and his wife Zelda), Fitzgerald seems to have had fond memories of the car. Another choice for Tom would have been a Pierce-Arrow. The Pierce was built to the highest standards and had understated styling. In the brash ’20s, conservative Pierce found itself out of step with the times, just as Tom Buchanan was at odds with Jazz Age society. 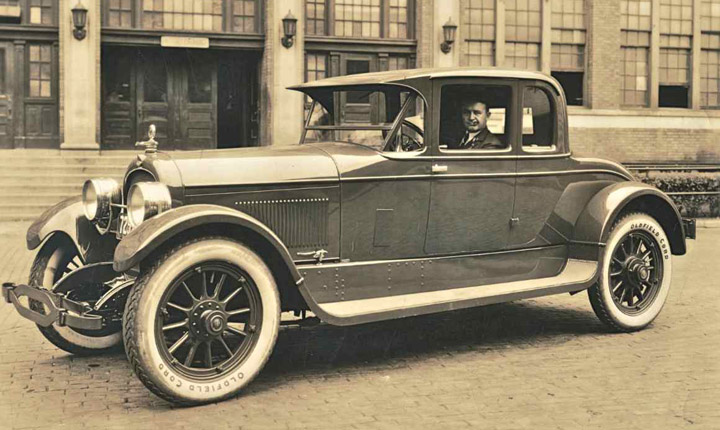 According to the book, Tom Buchanon drove a blue coupe. We speculate that it could have been a Marmon 34 (pictured), which the author himself once drove.

Or perhaps Tom drove this Pierce-Arrow, which was conservative like him.

Jordan Baker didn’t have an automobile, but she borrowed a car and left the top down in the rain. Odds are that Jordan didn’t mooch a cheap car. A Packard touring car would have suited her well. Packard was America’s most successful luxury car of the ’20s and would have been popular among Jordan’s set. 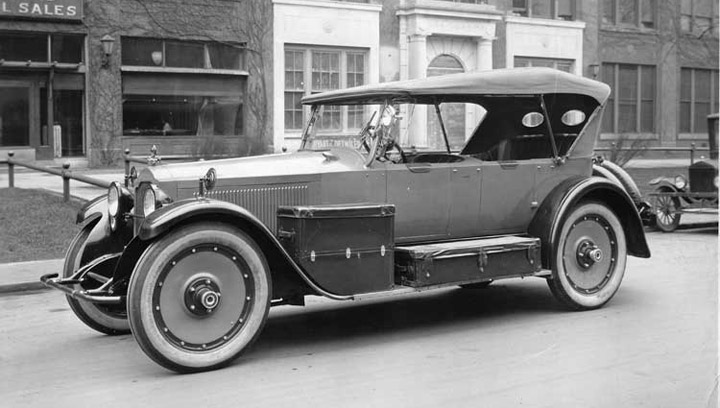 While we put Daisy in a Jordan, we’re putting Jordan in a Packard.

In the current Great Gatsby production, Gatsby drives what appears to be a 1932 Duesenberg SJ and Tom a 1933 Auburn. The cars are wrong for the period, but they look good on film. Had Gatsby lived long enough, he probably would have driven a Duesenberg SJ.

This is just my take on of the cars in The Great Gatsby. As with any book, readers are free to create their own vision of the story.