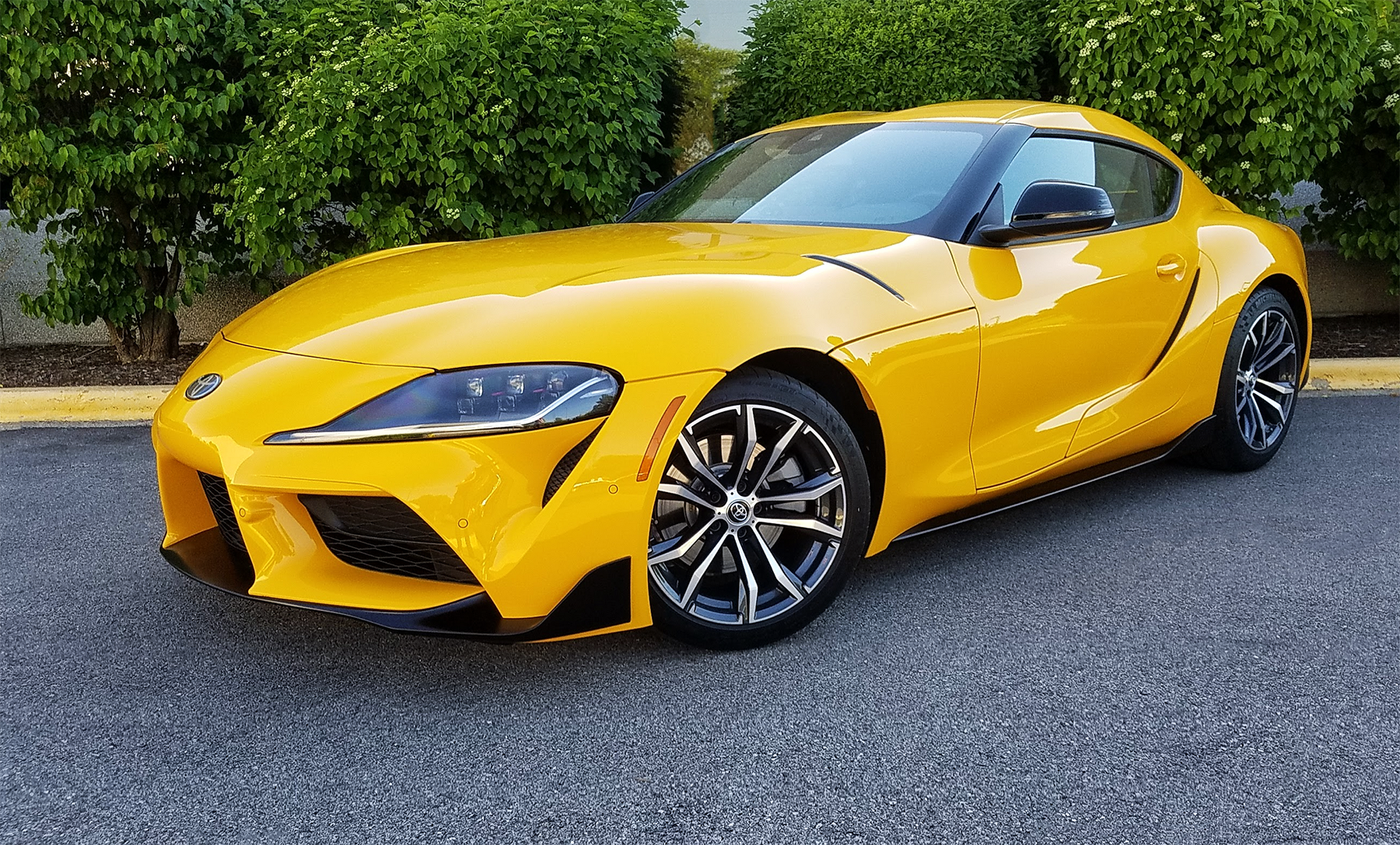 The not so good: Some complicated infotainment controls, low-slung cockpit can make entry/exit tricky, stingy cargo space, enthusiasts will bemoan lack of a manual transmission

Toyota brought back its storied Supra nameplate last year on a racy-looking two-seat coupe that shares its underpinnings and 6-cylinder powertrain with the BMW Z4 roadster. For 2021, the Supra’s six gets a 47-horsepower boost (from 335 to 382 hp), and the lineup gains an entry-level model with a 2.0-liter 4-cylinder engine—the subject of our review here. 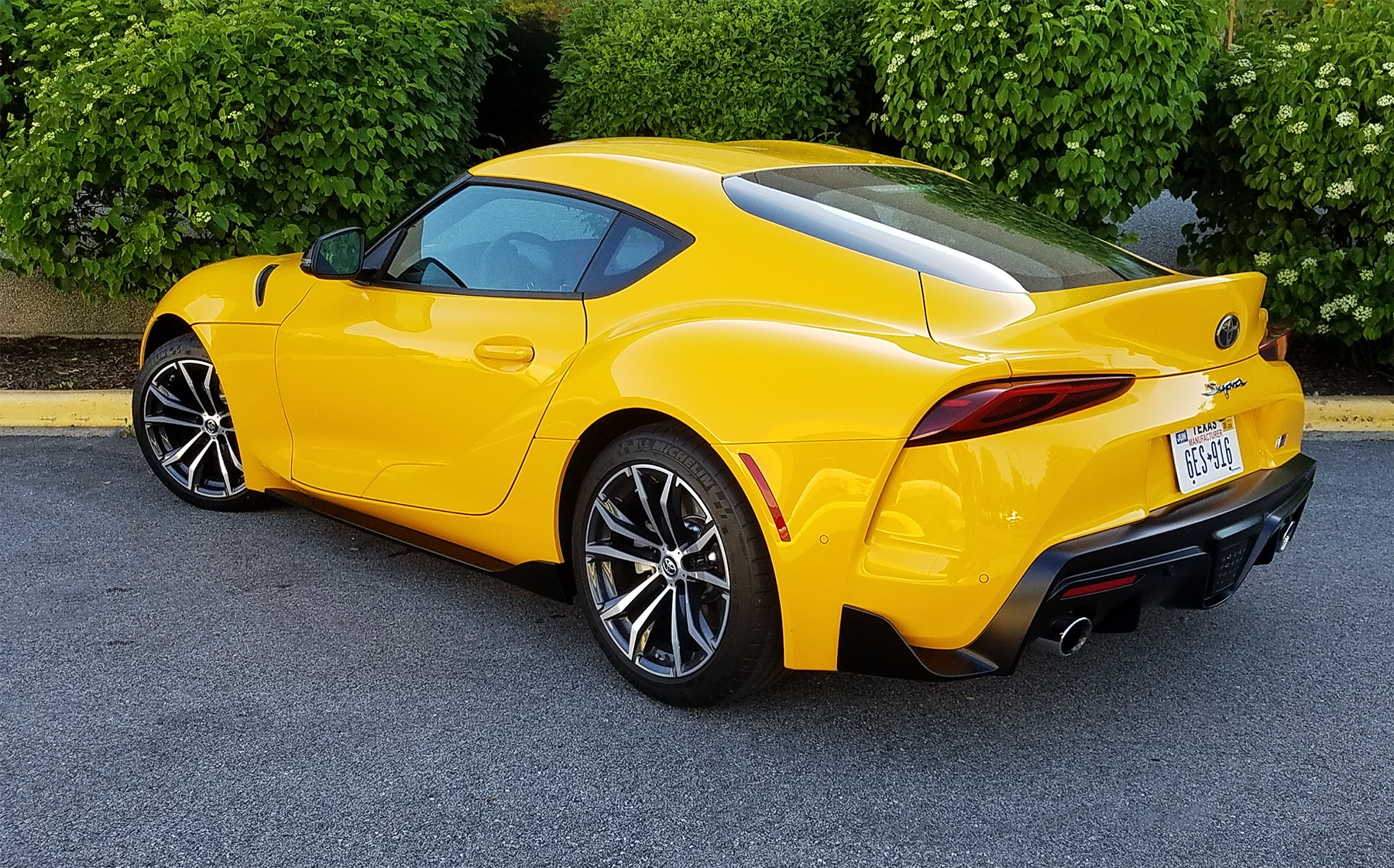 Combine the Supra’s dramatic bodywork with the extra-cost Nitro Yellow paint, and you’ve got a truly eye-grabbing car.

The new 4-cylinder Supra has the obvious benefit of a significantly cheaper starting price: $42,990, a full $8000 cheaper than the $50,990 base MSRP of the 6-cylinder-powered Supra 3.0. Even with destination, vibrant extra-cost Nitro Yellow paint, and the Safety and Technology Package (which is essentially fully loaded, save for accessory-type items such as carbon-fiber mirror caps, a carpeted cargo mat, and the like), the 2.0’s bottom-line price of our test vehicle came in at about $3K less than the 3.0’s starting price.

The steering-wheel badge is Toyota, but the majority of the interior components and controls are straight from the BMW parts bin. Even though the 2.0 lacks some of the features of the 3.0 models, the ambiance here is upscale.

Like the rest of the Supra’s underpinnings, the turbo 4-cylinder engine comes from BMW Z4—it’s the same basic powerplant that’s in the Z4 sDrive30i model, and its horsepower and torque ratings are also the same—255 hp and 295 pound-feet. Not surprisingly, the four does a bit better than the six in the fuel-economy department. It’s EPA-rated at 25 mpg city/32 highway/28 combined—that’s 3 mpg better overall than the Supra 3.0. 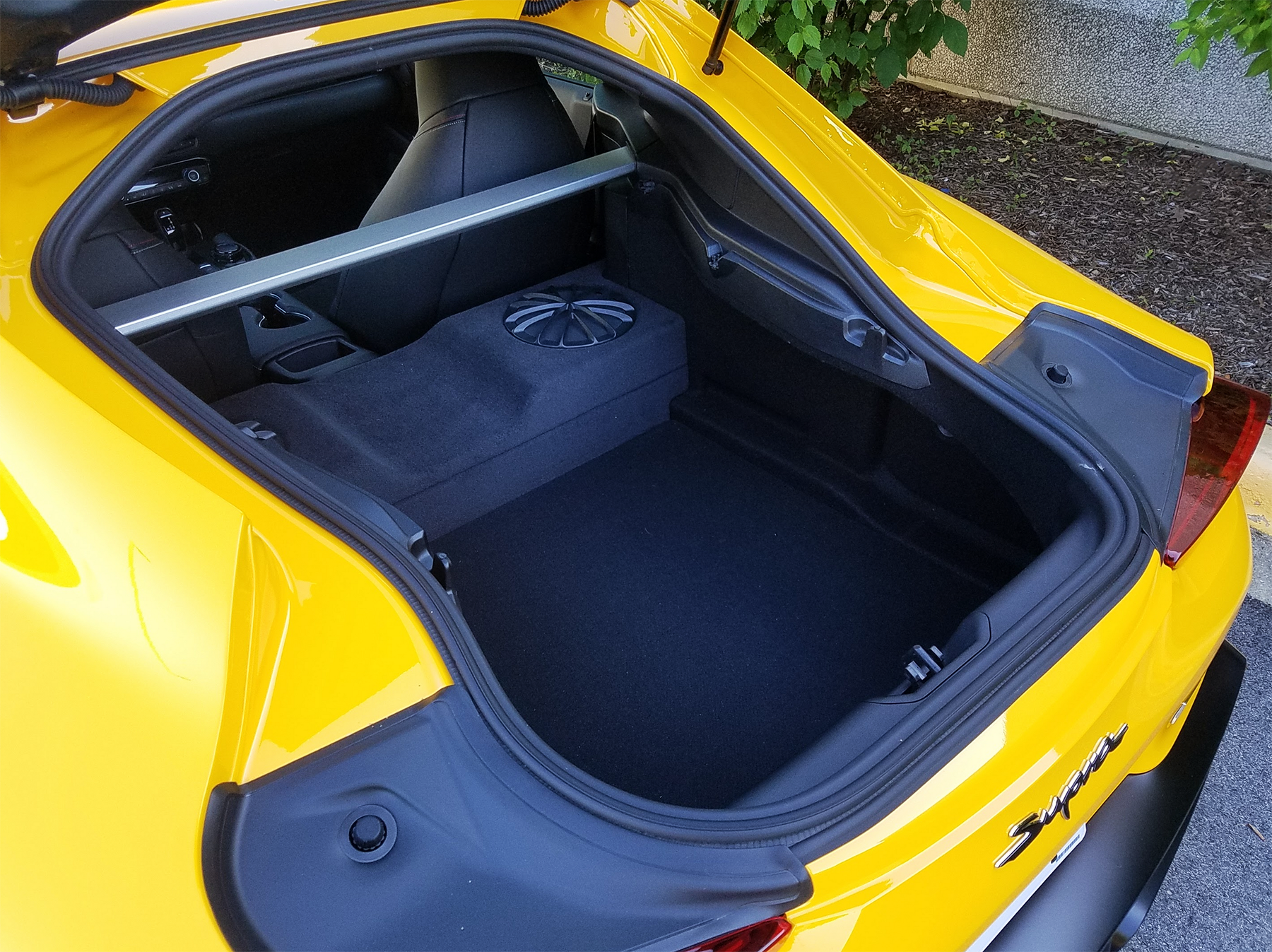 Luggage capacity isn’t a primary concern among Supra buyers, but there’s 9.9 cubic feet of capacity here–enough for a couple good-sized suitcases. Plus, the hatchback design makes the cargo area a bit easier to access.

We were fans of BMW’s excellent turbo four in the Z4 sDrive30i we tested, and we’re fans of it here. This is a snarky engine that pulls strongly from most any speed, with barely a hint of turbo lag; the 255-hp rating feels conservative by the seat of our pants. We’re also fans of the refined but aggressive exhaust note—one of the best, most-exotic 4-cylinder tones we’ve heard in a while.

The Supra’s lack of an available manual transmission is a downer for traditional sports-car enthusiasts, but the responsive 8-speed automatic transmission is a pretty good consolation—it’s always alert, and gear changes in both casual and full-throttle acceleration are quick and smooth. We never caught the transmission getting confused or ruffled. Plus, the steering-wheel shift paddles worked great to summon quick, smooth shifts—but we rarely felt the need to use the paddles.

However, we did experience the same quirk we noticed in our 2020 Supra 3.0 tester when the vehicle is coasting to a stop—the transmission’s downshifts are often unusually pronounced, and they make for an awkward, non-linear feel. It takes practice and a deft touch on the brake pedal to come to a smooth stop.

Obviously, the 4-cylinder isn’t as quick as the 2020 Supra’s six or the newly muscled-up 2021 version—Toyota lists a 5.0-second 0-60-mph time for the four, and 4.1 seconds for the 2020 six, and 3.9 for the 2021 six. Still, this “junior” Supra gives up much less to its more powerful siblings in driver engagement and excitement than you might expect. In fact, when driving in the congested urban and suburban environs of our Chicagoland offices, we might prefer the 2.0 Supra to the 3.0 version. Speaking of that, the impressions we gleaned from our test of a 2020 Supra 3.0 Premium hold true here, so check out that review for more details.

The Supra’s BMW-sourced turbocharged 2.0-liter 4-cylinder engine is officially rated at 255 horsepower, but in the lightweight Supra, it feels much stronger. Eighteen-inch cast aluminum wheels are standard equipment.

The Supra’s suspension tuning feels notably stiffer than the BMW Z4’s, which is in keeping with its pure sports-car mission over the more grand-touring focus of the Z4. The Supra 2.0 is a couple hundred pounds lighter than its 3.0 sibling, in part because it has smaller brakes, manual adjustable seats, and it doesn’t offer the 3.0’s active differential or adaptive suspension.

When you’re talking sports cars, “simpler” and “lighter” can be better in our book—especially because they also usually mean “cheaper.” The Supra 2.0 is a welcome addition to the model lineup that brings the cost of this German-Japanese hybrid down to a price point that makes it a lot more compelling. Hopefully that rumored manual transmission option will become available in the near future.

The new-for-2021 2.0 model brings the Toyota Supra’s price down to a shade under $43K to start, thus making this flagship sports car accessible to a broader range of enthusiasts. And even though it gives up 127 horsepower to its 6-cylinder sibling, the turbo 4-cylinder engine feels satisfyingly strong, and it rewards an engaged driver. 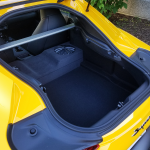 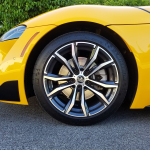 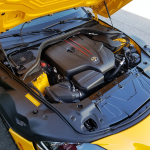 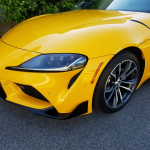 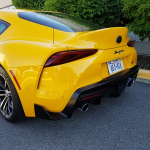 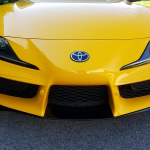 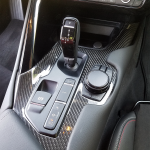 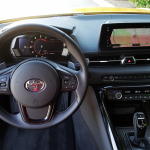 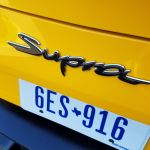 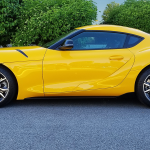 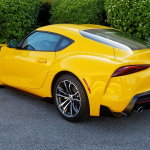 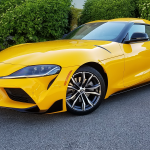