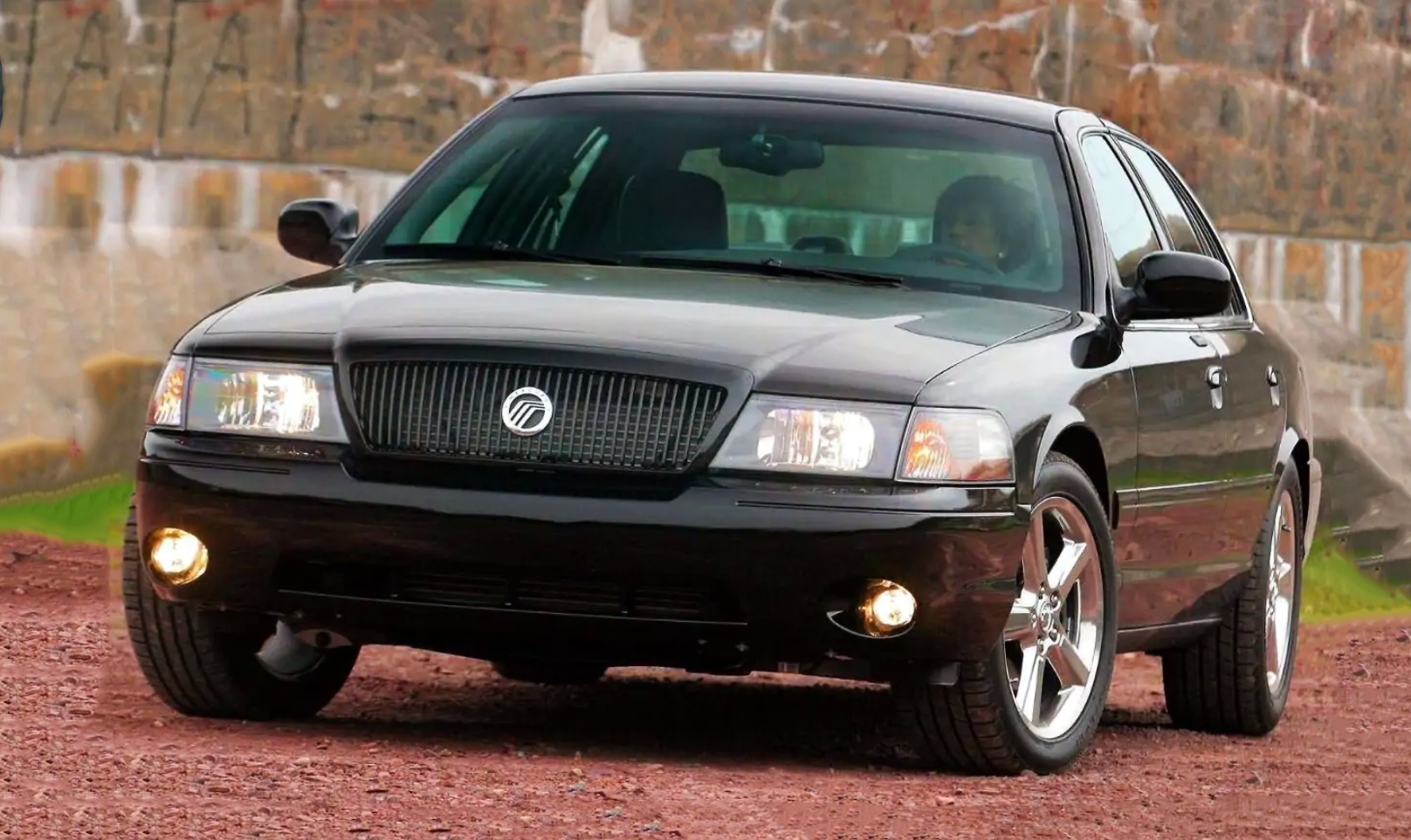 If you didn’t think about it too hard, you might have predicted at the time that the 2003 Mercury Marauder would have been a hit with the car-buying public. The car had a lot going for it: a powerful V8, decent handling, cop-car lineage via its Ford Crown Victoria corporate cousin, and stealthy good looks. Plus, the Marauder should have filled the void in muscle-car enthusiasts’ hearts created when the popular V8-powered Chevrolet Impala SS was discontinued in 1996.

The Marauder was not, however, a sales success. Dropped from the Mercury lineup after just two model years, the most athletic member of the Grand Marquis family racked up just over 11,000 sales, about 7800 of which took place in 2003. For record, roughly 70,000 Impala SSs were produced between 1994 and 1996.

So, what happened? Here are the three primary factors that led to the Marauder’s short tenure in Mercury dealerships:

With more than 300 horsepower on tap, the Marauder should have been plenty fast enough to satisfy traditional big-car/V8-engine enthusiasts—but it really wasn’t. The problem stemmed from the nature of the engine stuffed under the Marauder’s hood. Though it made decent horsepower, the 32-valve 4.6-liter V8 (borrowed from the much-lighter Ford Mustang SVT Cobra and Mach 1) didn’t generate much torque at lower revs; this was problematic, given the Marauder’s 4100-pound curb weight. Per Car and Driver, the Marauder reached 60 mph from a stop in 7.5 seconds–only slightly faster than a Ford Crown Victoria LX Sport, and significantly slower than a number of similarly priced sporty large sedans, including the V8-powered Pontiac Bonneville GXP.

Additionally, though its horsepower rating was higher, the Marauder was nowhere near as quick as the 1994-1996 Impala SS. The SS’s torque-rich 5.7-liter V8 propelled the big Chevy from 0-60 mph in just 6.5 seconds.

At a little over $35,000 to start, the Marauder was not inexpensive. The contemporary supercharged-V6-powered Chevrolet Impala SS listed for nearly $7000 less and was considerably faster. Worse yet was the competition coming from Chrysler (see below).

New for 2005, though available early in 2004, the Chrysler 300 launched alongside the Dodge Magnum wagon on DaimlerChrysler’s new LX architecture. The Dodge Charger sedan, which debuted for 2006, and Challenger coupe, which followed for 2008, would also be built on the LX platform. The large, rear-drive 300 not only boasted dramatic styling, but a potent available 5.7-liter Hemi V8 engine. The Hemi-equipped 300C blasted from 0-60 mph in just 5.9 seconds, and had a starting price nearly $3000 lower than the Marauder’s. Not surprisingly, the 300, and the more affordable Charger—which was also available with Hemi power—were instant sales hits.

The Marauder is plenty cool in its own right. Thought of as a police-prepped sedan treated to a dose of luxury trim and equipment, the big Merc has its following, Indeed, there is even a fan club for the car, which you can reach by clicking here.

If you’re looking for a Marauder of your own, your search will go easier if you’re cool with black. If you’re up for hunting a bit more, about 1400 of all Marauders were Silver Birch, just under 1000 were Toreador Red, and a mere 328 were Dark Blue Pearl. (Let us know if you’ve ever seen a blue example.) What follows is Consumer Guide’s original review of the 2004 Mercury Grand Marquis, which includes specs, standard equipment, and road-test review data on the Marauder–as well as some forward-looking news on the future of the Grand Marquis line from 2004’s perspective.

Mercury’s rear-wheel-drive full-size sedan shares its design with Ford’s Crown Victoria and is among the few body-on-frame automobiles. Grand Marquis groups models under GS and LS labels, and also offers the performance-oriented Marauder. Front side airbags are standard on Marauder and available on the others. ABS is standard; traction control is standard on all but the base GS, where it’s not available. Front side airbags are standard on Marauder, optional on LS. The only engine is a 4.6-liter V8 teamed with automatic transmission. GS and LS models have 224 hp. An optional LS Handling Package includes dual exhausts for 239 hp. Marauder has 302 hp, plus a sport suspension, monotone exterior appearance, and 18-inch alloy wheels vs. 16s on other models. It comes with front bucket seats, center console, and floor shift. Other models have a front bench seat. All but the base GS have standard power-adjustable pedals. Optional laminated side-window glass is designed to reduce wind noise, limit breakage in a collision, and improve security against “smash-and-grab” theft. Also sharing this basic design is the Lincoln Town Car. Grand Marquis’ performance and accommodations mirror those of similarly equipped Crown Victorias.

Soft base suspension absorbent, fairly controlled, despite some float on pavement undulations. Firmer Handling Package setup can be jittery over sharp, closely spaced bumps, but quells some float and is no big penalty in overall comfort. Marauder feels much the same.

FRONT: Good-old big-car feel, with adult-size room and easy access. However, seats in all models are virtually contour-free, so lateral support in turns is poor.

Trunk holds lots of luggage, but space is concentrated in a deep center well, so some bulky items are a tough fit. Spare tire still above rear axle, but available trunk storage unit divides center well into more-useful covered bins. 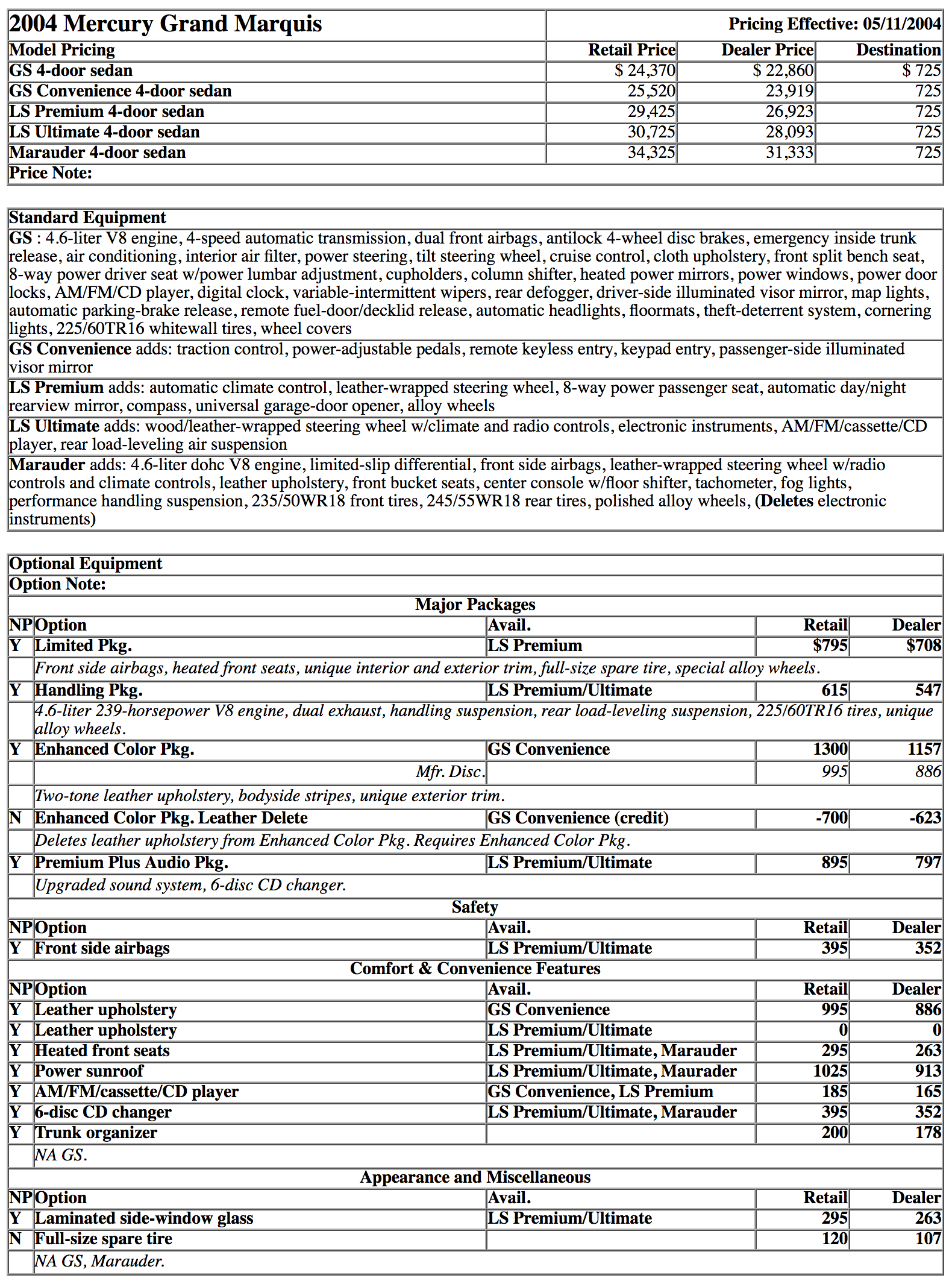 These sedans ride and handle nicely, but don’t feel or act as lively and efficient as more-modern designs such as the Dodge Intrepid and Chrysler Concorde. Marauder is a credible attempt at a muscle sedan, but doesn’t go far enough in performance or interior excitement to be a compelling enthusiast value.

It’s official: The Marauder won’t be back for 2005. Enthusiasts were unimpressed with power and performance that didn’t match the “bad boy” image the car tried to portray, and the Marauder bombed on the sales chart. As for Grand Marquis, it’s expected to get some sort of restyle for 2006, and possibly a 6-speed automatic transmission. But what happens after that is unclear. Like sisters Ford Crown Victoria and Lincoln Town Car, Grand Marquis uses a basic design that dates from 1979 and is long since paid for, which means pure-gravy profits on each sale. Dealers and company accountants love that, but they also know that old designs don’t keep selling forever. Lately, we’ve heard that Ford is thinking about replacements based on its Australian-market Falcon, a rear-drive V8 sedan slightly smaller than Grand Marquis and Crown Vic. Gossips say the guard could change as early as model-year 2008, but Ford says the idea is only under discussion and would not affect Town Car, which will eventually go its own way. Of course, it’s possible that the oldies might run alongside the Falcon-based models, depending on how sales fare in the meantime, but decision points are still a ways off, so most anything could happen. 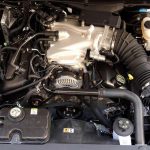 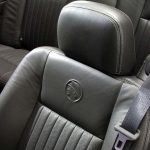 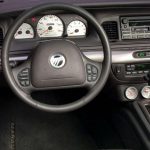 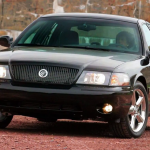