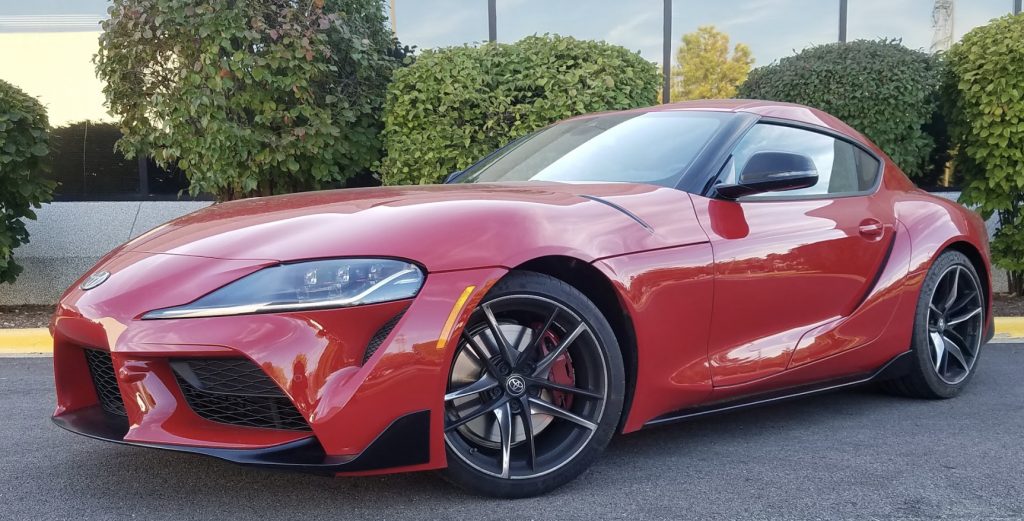 The good: Forward and side visibility

The not so good: Some complicated infotainment controls, low-slung cockpit can make entry/exit tricky, stingy cargo space, enthusiasts will bemoan lack of a manual transmission

Through four generations that spanned the 1979 to 1998 time frame, the original Toyota Supra maintained the image of a traditional GT (Gran Touring) car, which combines luxury with performance. 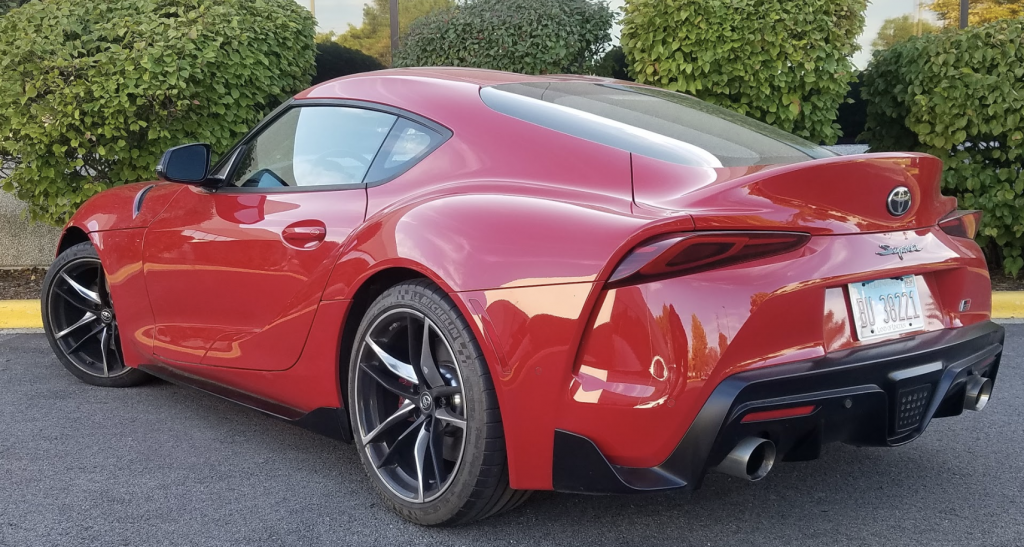 More of a true sports car than its ancestors, the 2020 Supra is a low, 2-seat, rear-drive hatchback with sinister looks and terrific performance. It far out-muscles Toyota’s other 2-seat sports car, the slightly smaller and much cheaper 86.

Although it had been gone for two decades, the Supra name still carried some weight. And after much anticipation, it reappeared on a 2020 model that shared BMW mechanicals with that company’s equally new Z4 Roadster.

While all previous Supras were nominal four-seaters, this new one only seats two. That and a decidedly sporting focus means it’s now a true sports car rather than a cushier GT. That’s good from a performance standpoint, but takes its toll on comfort and convenience.

Under the Toyota shroud is a BMW 3.0-liter twin-scroll-turbo straight six … and if you’re going to “borrow” an engine, this is among the best. It pulls strongly from virtually any speed and makes beautifully sporting noises as it does.

Underhood lies the famed BMW 3.0-liter twin-scroll-turbo inline six producing 335 horsepower, which feels like a lot more. Not only does it provide great acceleration (our test car averaged a quick 4.18 seconds in the 0-60-mph dash, close to the factory’s 4.1-second claim), it also produces an equally great exhaust soundtrack. Floor the throttle from a stop, and — unlike some turbos – the Supra leaps off the line, with power building further as the revs climb, breaking the tires loose in first gear near the engine’s lofty 7000-rpm redline. The 8-speed automatic transmission downshifts quickly when the throttle is stabbed at speed, but also produces slightly jerky shifts both under acceleration and when slowing to a stop. Note that a horsepower increase to 382 is due for 2021, as is a lower-cost 4-cylinder turbo version with 255 horsepower. The 2021 models are due to arrive in June of this year.

Handling is first-rate. Steering is exceptionally responsive, and there’s little noticed body lean in fast turns. The downside here is that the ride can get a bit abrupt over bumps, but it never really feels harsh.

And then there’s the rest.

The low-set, cozy cockpit is comfortable enough once you fold yourself in, but the control layout — borrowed from BMW — uses a confusing mix of touchscreen, buttons, and a console control knob that complicates many adjustments.

Sitting low to the ground means the Supra challenges even the limber upon entry and exit, with taller/larger folks finding it even more difficult. Once seated, there’s a decent amount of headroom and fair legroom, with good visibility to the front and sides. But visibility to the rear is very restricted by thick roof pillars (though a rearview camera helps when backing), and the sunvisor doesn’t pivot to the side, leaving quite a bit of the side window uncovered.

While the donated BMW drivetrain is a blessing, the donated BMW control layout is not. This is an area we wish Toyota would have substituted its own hardware. There’s a knob for volume, but everything else is adjusted through either the touchscreen or the console-mounted control knob, and few of those adjustments are quick, easy, or intuitive. However, there are eight programmable buttons for quicker access to frequently used radio stations or navigation destinations – which is handy – and you can mix AM/FM/Satellite stations in favorites.

Weight is a hindrance to performance, and the Supra encourages you to travel light. Interior storage consists of a virtually useless glovebox (nearly filled by the owners manual), along with two cupholders, a small forward console bin with 12-volt/USB plugs and Qi wireless charging, and tiny map pockets in the doors. That’s it. 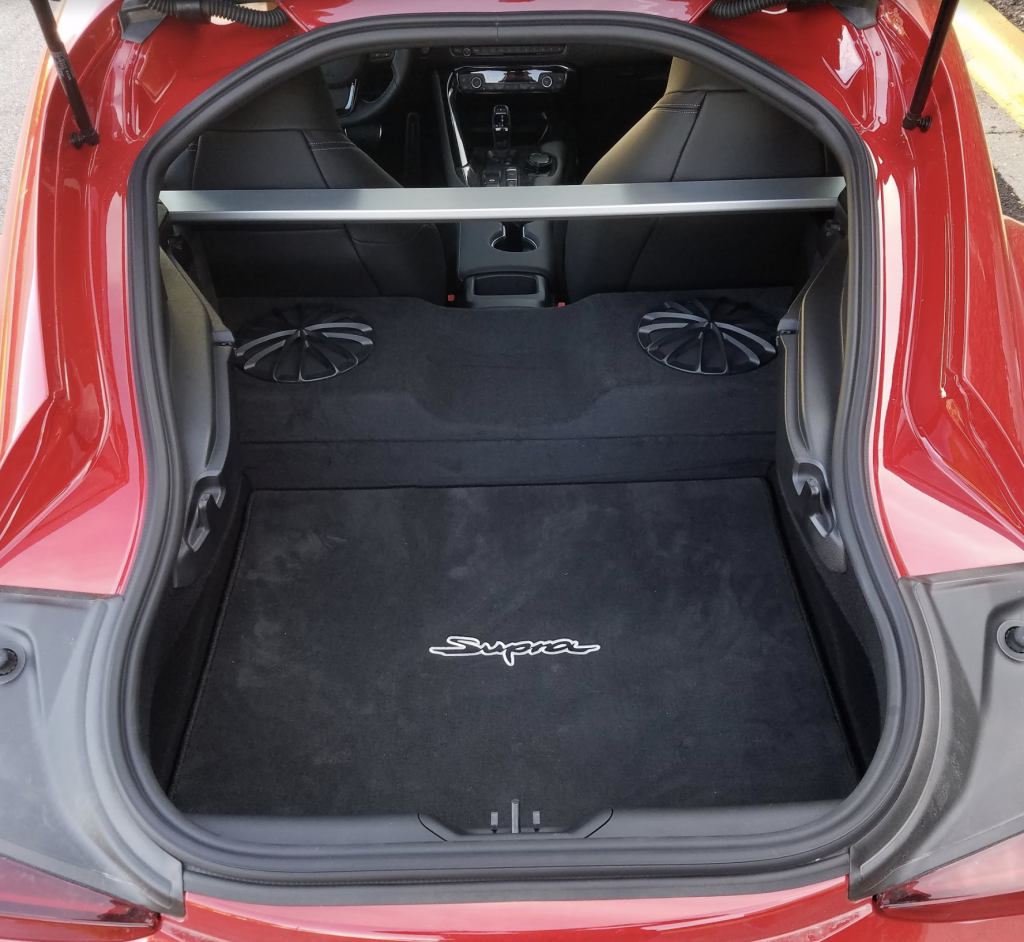 Although the cargo area is relatively wide at the rear, it’s narrow everywhere else, including the opening. It’s also quite low, and about a foot ahead of the Supra carpet lettering is a raised platform that eats up some space.

It’s not much better in back. Although the hatchback body style might make you think “utility,” the area is wide at the rear but narrow otherwise, there’s not much height under the hatch lid, and there’s a mid-height wall behind the seats that prevents sliding much of anything forward.

As closed, two-seat sports cars go, the new Supra plays in a price/performance gap between the Nissan 370Z and new 2020 Corvette. (Since the BMW Z4 is a convertible – and a bit pricier – it’s not really a direct competitor, though both will likely be on some shopping lists.) And it fills that gap well. But its terrific performance is tempered by its completely focused pursuit of it, so this new Supra shouldn’t be looked at as the comfortable, fairly versatile Gran Touring car its ancestors were known to be.

The 2020 Toyota Supra 3.0 Premium is a true sports car, and its aggressive appearance doesn’t hide that fact. Neither does its accommodations, which limit its usefulness as an everyday driver — though it would sure make that trip into work a lot more fun.